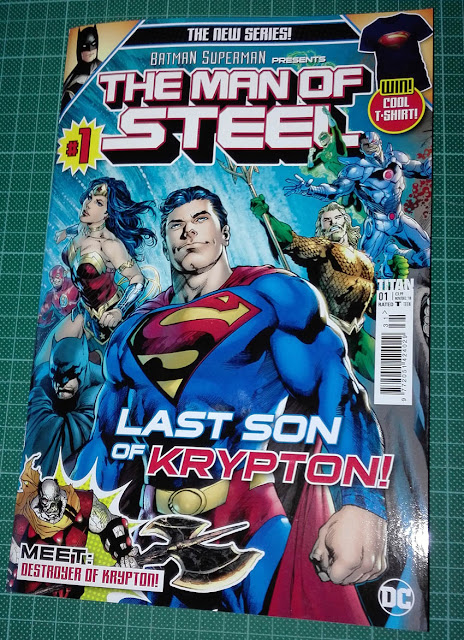 Superman hasn't fared too well as a British comic in recent times, with any title starring him tending to be short lived. However, that hasn't deterred London based Titan Comics to have another go. Today, The Man of Steel No.1 arrived in newsagents, consisting of 76 pages for £3.99. 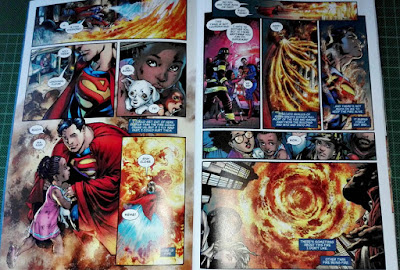 The comic has replaced Titan's Batman/Superman comic on the schedule, and the indicia actually has it down as "Batman/Superman Vol.3 Issue No.1". No doubt this is to help suppliers continue to order the comic by keeping it on their system with the previous title.

The Man of Steel No.1 reprints the first three issues of the American DC Comic of the same name. As this was a 6 issue mini-series in the States it means that the story arc will conclude with the second issue of the UK version. In America, the story then continued into Superman and Action Comics. Whether the UK Man of Steel comic continues to call itself that or revamps again into a Superman title remains to be seen. Things are never straightforward in that respect with Titan Comics!

The comic has replaced Titan's Batman/Superman comic on the schedule, and the indicia actually has it down as "Batman/Superman Vol.3 Issue No.1". No doubt this is to help suppliers continue to order the comic by keeping it on their system with the previous title.
Reminds me of EC Comics subtly changing a comic's title as it changed genres, to avoid having to pay the Post Office for distributing a new comic.
Moon Girl (superhero) to A Moon, A Girl, Romance to Modern Romance.
Later, when DC tried to change from superhero to prehistoric, they got stuck halfway: Moon Girl & Devil Dinosaur.

Actually that was a Marvel comic. DC did try that stunt a few times, sometimes getting away with it, sometimes not. Seems to me Charlton did it as well, alot.

Oh ha, ha, Mike. Moon Girl and Devil Dinosaur is a Marvel title, but apart from that slight error, that was a good joke.

This new comic seems to actually be called Batman Superman Presents. I'd expect it to use the Superman logo instead of the Man of Steel one from #3 onwards.

I wish them luck, although Titan's inconsistency frustrates me a tad. I want them to succeed - I want DC reprints on these shores - but although Titan aren't as big a company as Panini, they do things so differently compared to Panini's Marvel reprints.

There have been errors over time (printing errors, next issue sale date errors, etc.). Plus, their websites and social media feeds are rarely updated.

I get frustrated because I grew up at a time when Egmont/London Editions Magazines/Fleetway consistently put out great DC reprints on these shores, even though some didn't have the longevity of Marvel UK titles. I want a vibrant reprint scene for DC over here.

Be nice if there could be some letters pages, too. None of Titan's superhero reprints have letters pages, nor have they in a while. I don't blame them for that, by the way. I know people probably aren't writing in.

As I said, the indicia says it's called Batman/Superman. "presents" is just a way of linking it to the new title on the cover and to avoid confusion (because "Batman/Superman The Man of Steel" would sound silly).

If the cover's anything to go by, it looks like it might be an anthology series : after the six issue Superman series, maybe a Wonder Woman series, etc. Which might explain the "Batman Presents" title, and the presence of Aquaman and other characters on the cover. Whichever character has a film out at the time...

That was the cover to the American edition, Kevin, which Titan have just chosen to use for the UK one. The characters will feature in the story. Green Lantern and Batman guest-star in the chapters in this issue.

I haven't seen this in Glasgow yet. Or last week's "Batman". Is it around elsewhere? Is it time to ask for a pretty big favour? Or look for a trade collection of "Man of Steel"? Making sure it's this one. Or... is it... not essential?

Ah - Superman turned up in Glasgow a week late, which happens sometimes, and, upon checking, Batman's advertised to be out in November, not October. Well, that happens, too. Now I just need to find some reading time.