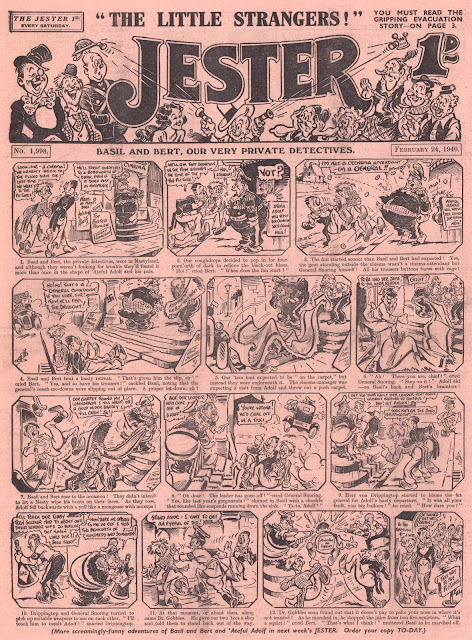 Children's comics of the wartime period often tried to raise the spirits of their readers by poking fun at Hitler and his cronies. Such was the case with this example from The Jester No.1998, dated February 24th 1940. Basil and Bert were private detectives created by Don Newhouse and Roy Wilson, although by the time this strip appeared I believe the art was by George Parlett. (Source: Encyclopedia of Comic Characters by Denis Gifford, 1987.)

This was part of a series of self-contained adventures of Basil and Bert in 'Nastyland' encountering 'General Snoring' (a parody of Goering) and 'Ateful Adolph. Hopefully, showing the vile Nazis as complete buffoons helped the readers cope a little better with the hardships of the times. Maybe it's also the best way to deal with the Nazis of today, - to portray them as the complete losers they truly are.

The Jester was published by The Amalgamated Press from February 1924 to May 1940, and merged into The Funny Wonder. Today, it's one of the titles recently bought by Rebellion Publishing.

I think it does work making them look silly...laughing at them...takes the power out of them...Hitler didn't m,ind people showing him powerful..evil..etc...Bu thated being made to look stupid..a clown..a fool.. so it was the right way..

Yep, bullies and narcissists don't like to be mocked. Mainly though it would help young readers cope if they thought of Hitler as a stupid buffoon instead of a scary figure.