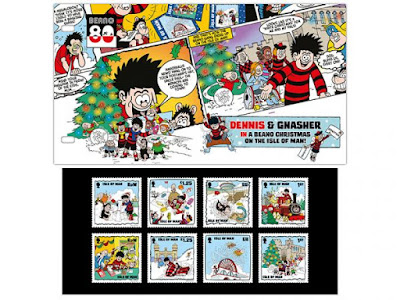 Available from today, a special set of Christmas stamps for the Isle of Man featuring Dennis and Gnasher! Exclusively drawn by Nigel Parkinson. 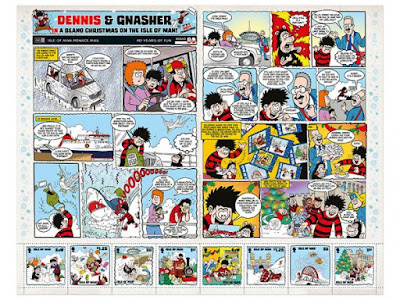 Even if you don't live on the Isle of Man you can still order a set from here:
https://www.iompost.com/stamps-coins/collection/a-beano-christmas-on-the-isle-of-man/

Can Minnie the Manx be far behind? 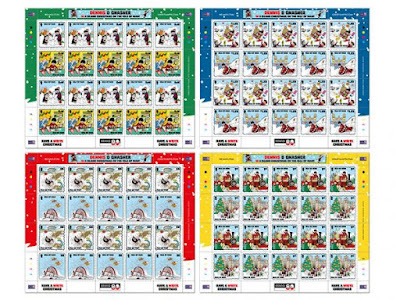 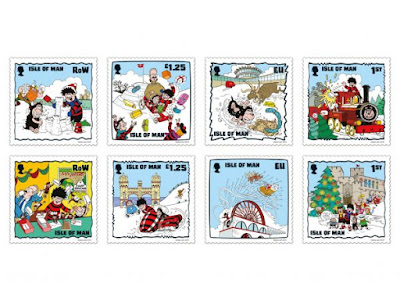 not bad but... I'm just completely confused.. I really can't see the connection between Denise and the Isle of Man.. the character now lives in Beano town, never lived on the Isle of Man.. Davey Law was from Scotland... D.C. Thompson was based in Dundee.. original creator Ian Chisholm was born in Dundee..

Nothing against anything like this but.. it just seams completely.. confusing and meaningless.. It's like when my home town (kinda) has the yearly Beatles day.. okay, it raises a lot of money for charity, but apart from one Beatle living in the same county (a few towns away but he keeps to himself), there is no connection at all.. So it's a bit pointless why they thought it was a good idea.. (my personal views on the band aside).. It's just seams more like a 'lets make money' then a 'lets honour/reward/pay tribute' to anything.. not that everything needs to be like that of course.. kind sad fact of life is that money is such a necessary of the world, to the point where the more 'important' you are, the more money you expect to be given... (Compare the work done by a footballer to a Police officer or fireman, then compare the prices.. try to figure out the logic)..

Oh well.. end of the day, Nice work by Nigel Parkinson, and a bit of cheap collectible merchandise ^_^ which is never a bad thing.

Well... Beanotown isn't like the Village in The Prisoner you know. He can escape and visit other places, which is what happens in this strip when Dennis and his family to to the Isle of Man. :)

yeah, no problem and he does move around, but it still seams a bit weird choice which is more I was getting at.. Sadly I do see some nice enough items which are just done for no reason other then money. Often, I have some nice t-shirts but a lot just have standard art which they think just printing it on a t-shirt means you can charge a lot more for it.. yeah, i'm a little down right now but okay ^_^

Kinda reminds me of when more American comics do 'special edition' variant covers for random issues.. Not a huge fan of them, even if some covers are nice, but Issue 1? maybe, it's a big deal.. issue 12 for a monthly comic? yeah, fair enough, an event.. 25th Anniversary of the company? maybe.. 20 covers for issue 37?...

but like I said, it's nice work, just a big weird for the stamps to randomly pick the isle of man for a special edition set..

I hope you'll be feeling brighter tomorrow, Ryan. If it helps, your Combat Colin order will be posted tomorrow.

Plaudits to the Isle Of Man for acknowledging the Beano's anniversary. Pity the mainland Post Office didn't think the same way, rather than churning out another Harry Potter set.