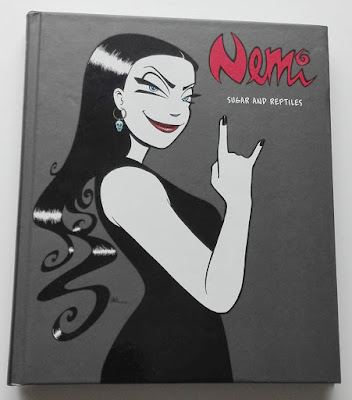 Several years ago, Titan Books had the UK license to publish collections of Lise Myhre's Nemi strip in hardback books, translated from its native Norwegian into English. Four volumes in total were published, with the last being in 2010.

The books have been published in Norwegian for a long time of course, and prove to be popular over there. Now, Gyldenal in Norway have published a new collection, and it's in English. 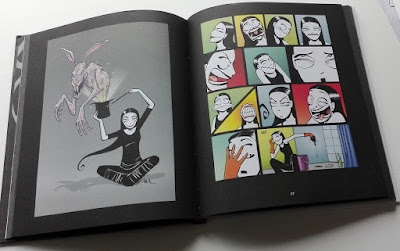 The format is exactly the same as the Titan Books editions, and it contains material not seen in those books. With 160 pages in total, it features many strips, plus various full page illustrations that Lise produced for the monthly Nemi comic. A fantastic package and very funny. 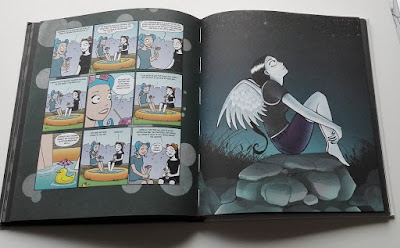 Titled Nemi: Sugar and Reptiles, the book is only available from the Norwegian publisher at this website:
https://www.tronsmo.no/bok/9788205514416/NEMI_-_SUGAR_AND_REPTILES

You can even have your copy signed by Lise if you contact them first. (Details in the above link.) 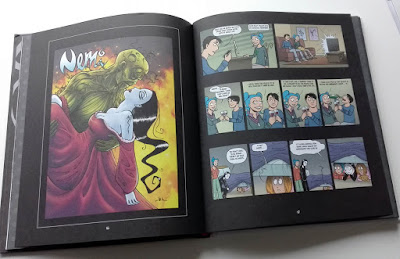 Nemi began in 1997, and became a huge hit in Norway, making her creator a celebrity. (Comics have a lot of respect in Norway.) Described as "a mascot for outsiders and a friend to those who have none", Nemi is a much loved character with a wide appeal. The strip appears in various newspapers internationally, and ran in the UK's Metro daily for a few years. The monthly Nemi comic began earlier this century and continues to be popular in Scandinavia. It's a pity there's not a UK edition, but at least we now have this new book. A perfect Christmas present for a friend, or for yourselves!

I haven't seen Lise for a long time, but here's a photo from ten years ago when she invited me to the launch of Titan's second Nemi book which took place at the Norwegian Embassy in London!

A friend of mine who is Norwegian (and ran her only comic company for a while, now moved to online only but printed ones appeared in newsagents) quite likes Nemi so I kinda take that as a good recommendation ^_^ and I'm always happy when European comics get published in English, cause there are SOOO many good ones which just never has been (the same friend expressed surprised when I commented that Pierre Seron's comics hadn't been translated into English, cause they have been pretty much translated into every OTHER language ¬_¬). Even if i'm not keen on the comic at hand, it's always good to better releases like that.

Thanks for this - I never realised there were collections available.

Nemi was the only reason I ever picked up a copy of Metro.

The first four books are probably out of print by now but there are one or two on Amazon.