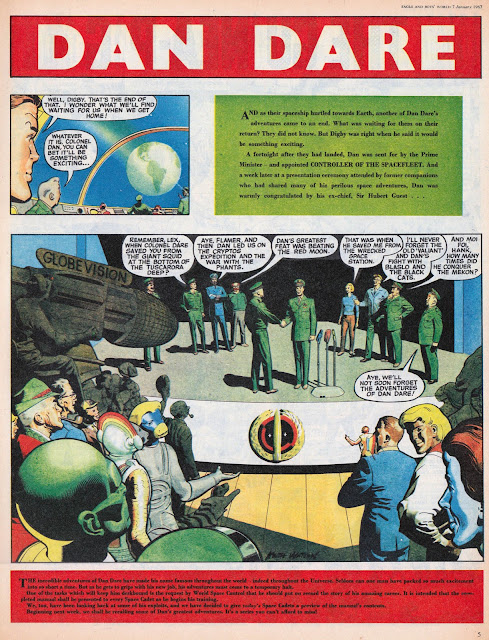 Last week I showed the penultimate Dan Dare story (from the 1966 Christmas Eagle) so it's only fair to show you the final episode from the following week. This was how the original run of Dan Dare ended. The series had begun in Eagle Vol.1 No.1 in 1950 and concluded in Eagle Vol.18 No.1 dated 7th January 1967.

An impressive run of 17 years deserved a significant final episode, and in the end Dan Dare is promoted to Controller of the Spacefleet. A footnote tells us that Dan is to be deskbound and will write his memoirs... in truth Dan Dare was going to go reprint from the following week, re-presenting stories from the 1950s.

That final chapter is rather odd in its page design. Only two panels, and a huge caption. The artwork by Keith Watson is superb though. 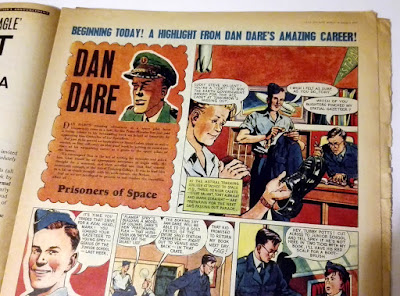 Although a significant ending to the strip, it must have disappointed faithful fans to imagine that dynamic Dan Dare was being consigned to a desk job! He clearly had many more years of adventuring in him, but it would be ten years before he was revived for 2000AD in 1977, and that version didn't sit well with hardcore fans either.

Dan Dare has been brought back a few times since of course, in the new Eagle, in Revolver, the Virgin Comics series, the Titan Comics series, and arguably most faithfully in Spaceship Away comic. It seems you can't consign The Pilot of the Future to a desk forever!

That oddly laid out page suggest some editing- I wouldn't be surprised if it was a two pager with a new adventure starting half way through when the axe fell and they had to wrap it up. Rather like the FF in SMASH! who ended a very complicated, dramatic, emotion charged story with The Thing saying "You Know it, Stretch!" THE END. Publishers!

Yes, that would make sense. The previous episode was a bit odd too, so it probably was intended to be a two pager, or a new ending was hastily done.

..but following the Prisoners in Space story, there was a very short serial as part of Dan's memoirs, which was new (although a party scene had been borrowed from the next reprint, the Man from Nowhere). And the next five or so Eagle annuals had new Dare stories. (The first Lion Summer special following the amalgamation with Eagle had a text tory set back in the Flamer Spry era when the reprints were set, but I don't count that!)

I didn't know, that, Nutty! Were the new stories set in the continuity after Dare had been promoted, or was there no mention of it?

There were no new stories set after Dan's promotion until the 2000 A.D. version. Regarding the ending of the previous story 'The Menace From Jupiter', it was obviously brought to an end in a hurry. The weak ending involving all the Pittars dying from Digby's cold was hastily 'invented' because there was no mention of Digby having a cold until the final episode. Given that he also wore a spacesuit for all the time he was in contact with the Pittars, he couldn't have given them a cold anyway.

Thanks for clearing that up, Steve! Much appreciated.

That one short serial between the reprints was set in the past as Dan explained that it had only just been declassified - I'll do a scan of it shortly!

No need for scans, I'm not revisiting Dan Dare on this blog. Thanks for explaining the situation though. So the promotion episode is still the "last" in terms of continuity.