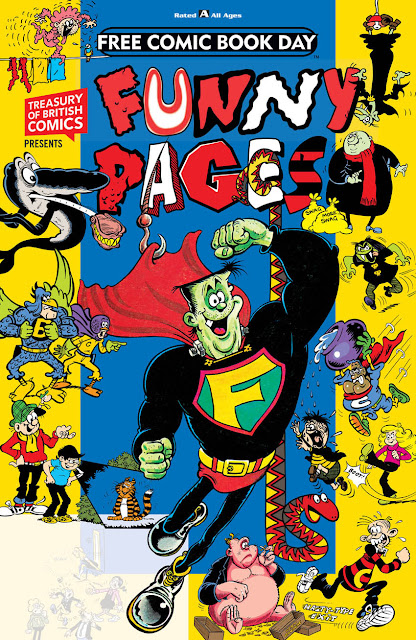 I hope you'll pardon the interruption in the selection of comics from Christmas Past to bring you this great news about a comic that's coming in your future! - and it'll be free!

Funny Pages is coming on 4th May 2019, reviving classic humour strips from such comics as Buster, Whizzer and Chips, Wham!, Cheeky, and more! Here's the press release direct from Rebellion...

The Treasury of British Comics Presents Funny Pages is a stack of silliness in a folio of frivolous foolishness for FCBD 2019! This bounty of belly-laughs for kids of all ages sees the return of some of the most fondly remembered comic characters in British history!

The 32-page US-format comic will be available only from participating comic book stores on Free Comic Book Day 4th May 2019.

Free Comic Book Day takes place on the first Saturday of May and is an international event to help bring new readers into independent comic book stores.

Infant delinquent Sweeney Toddler commits crimes from the crib! Just when you thought it was safe to parody Steven Spielberg shark films – along comes the terror from the depths, GUMS! Meanwhile, Martha’s Monster Make-Up and Faceache strips are both a scream!

The egg-straordinary adventures of super-zeroes Birdman and Chicken are sure to get you clucking, and you can count on Deadley Hedley The Vampire Detective to be up to your neck in laughs when he joins a stake-out at a monster Christmas Party!

Not just that – but a loopy lagoon of laughs including Kid Kong, Grimly Feendish, Prambo, X-Ray Specs, Ivor Lott and Tony Broke, and Glugg!

This first ever Treasury of British Comics FCBD issue features reprint stories of well-loved classic series - an IDEAL FCBD title that will appeal to both kids and those adults who love these characters from their own childhoods!

Don’t be a lazy bones – hit your LCS for Free Comic Book Day 2019 and find your funny bone!

Even as a one-off, this is exciting. Having original content* alongside reprint, even moreso.

May be wishful thinking, but you sort of have to suspect this is a way to test the waters.

*Though brace yourself for the 'I don't like change' brigade. Of which I'm a part-time member, admittedly.

Looks like Rebellion tried to get two slots and failed. They're still doing a 2000AD issue, but they're charging 99p/99¢ for it instead.

Kal, unfortunately there's no new stuff in Funny Pages. The PR info made a mistake there which I've only just been told about so I'll change that ASAP.

You will see new material...soon. Not in the FCBD issue though. Someone has made a mistake there.

Will definitely get a copy.

I always miss out on FCBD because there are no participating shops near me (actually, there's only one dedicated comic shop anywhere round my neck of the woods, and that only opened recently. So to get this - and I really want to get this! - it looks like I'll have to go into Forbidden Planet in London.

Who is Keith? He sounds like someone "in the know", and what he posted sounds promising. Could there possibly be a funny-story version of the Misty/Scream specials on the way? I hope so.

Crumbs, I don't what it is, but whenever I see a picture of a character like Kid Kong, Cheeky, The Super Seven, or any of those old Fleetway characters, I come over all wistful (though not so much for DC Thomson characters - weird).

Keith is an editor/writer at Rebellion, Kevin, so to paraphrase Hylda Baker, he knows, you know. ;-)