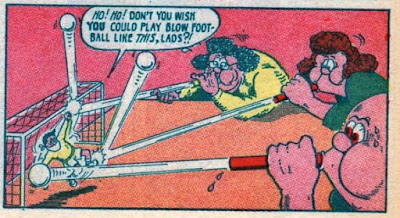 I've just heard the sad news that the cartoonist Terry Bave has passed away. I received a message from his son which read:

"Hi, it with deep heart to let you know that Terry Bave passed away, after a short illness, on 6th December 2018. He was drawing, despite his illness, right up to the end. His last creation being an wedding anniversary card in October to his wife. They had been married 66 years. He will be missed by all his family and friends, and countless comic followers.
All the best,
Russell Bave (Terry's son)"

Terry was born in Bristol in 1931 and had been freelancing as an illustrator since the 1950s. In the 1960s he approached Odhams for work and was given Sammy Shrink to draw in Wham!, taking over from the original artist David Jenner. Sammy would prove to be a huge hit, and was revived in the early 1970s for Whizzer and Chips and ran for many years.

Terry's clean, pleasant style was always very popular with the readers, as were the scripts, mainly written with his wife Shiela. Terry and Shiela came up with many new characters for the expanding IPC line of comics in the 1970s, having continued success with strips such as Me and my Shadow, Jimmy Jeckle and Master Hyde, The Slimms, Calculator Kid, Donovan's Dad, and many more.

In the 1990s he found work with D.C. Thomson, becoming the new regular artist on Winker Watson for The Dandy, and later he published his autobiography Cartoons and Comic Strips. He retired in 2007. 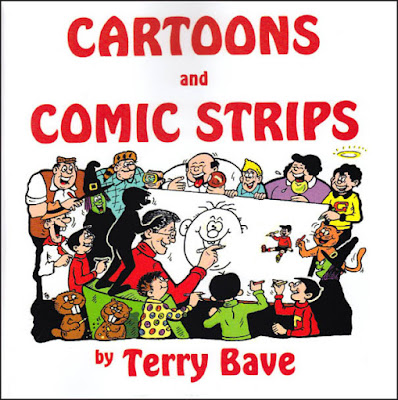 My sincere condolences to Terry's family and friends at this sad time. Fans of his work will also be saddened but the best way to remember him is through the thousands of pages he drew over his long career, bringing fun and smiles to millions of children. Here are just a few examples....
Terry Bave's autobiography, Cartoons and Comic Strips, is available from Lulu here:
http://www.lulu.com/shop/terry-bave/cartoons-and-comic-strips/paperback/product-20625272.html

John Freeman has written a lengthy memoriam on his Down The Tubes blog:
https://downthetubes.net/?p=102852

Loved his and Sheila's work.

What a wonderful comic legacy and his work with Shelia's writing was great to read has a kid...he really connected... Thanks Terry for all the fun... God bless Peterx

Terry Bave was one of the few British comic artists I knew by name because he was one of the few (sorry for the repetition) who signed his pages. Not that he needed to : his style (the characters' little round faces) was instantly recognisable. But I didn't know he'd been in the business so long, and was responsible for some of the older stuff like Me And My Shadow, which was so clever.
This has been a bad year for losing comic legends. Now would be a good time for Rebellion to release some compilations of the funny stories, with biographies/interviews with those responsible (before it gets too much later).