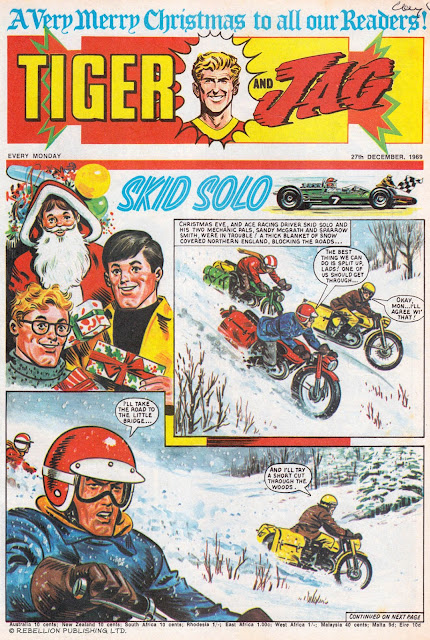 Most adventure comics tended to avoid Christmas stories as they interfered with continuity or were an awkward fit for serials, but Tiger and Jag editor David Gregory was happy to accommodate the festivities (as did Barrie Tomlinson when he was promoted from sub-editor to editor in 1970). This cover by John Vernon was always a favourite of mine, as it managed to fit in Santa, Christmas decorations, presents, snow, a special festive logo, and still find time for the story.

The Skid Solo story continued inside with more winter adventure. The scriptwriter was Fred Baker, a very busy and talented creator who also wrote Billy's Boots, Hot Shot Hamish,  and many other strips... 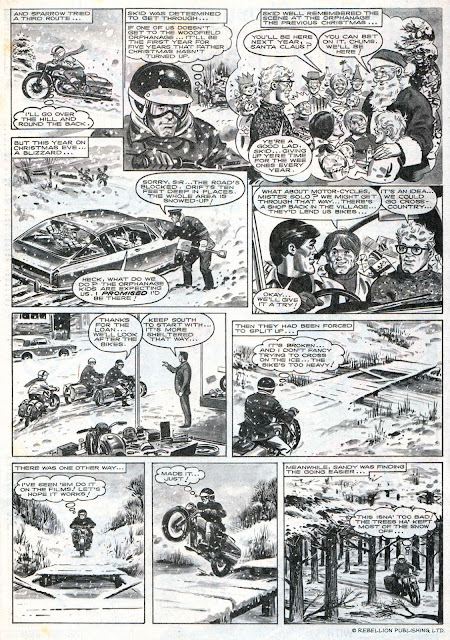 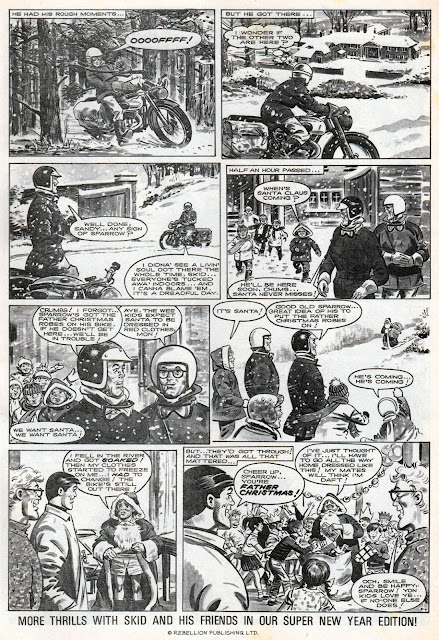 Roy of the Rovers and his team were also celebrating, with a slap-up feed. art by Yvonne Hutton... 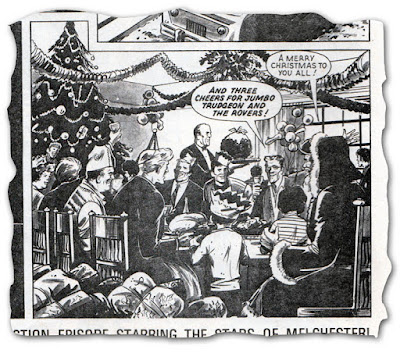 Splash Gorton (name inspired by Flash Gordon, look inspired by Sixties hippies) was a strip about a swimmer, with art by Joe Colquhoun ten years before he'd draw Charley's War... 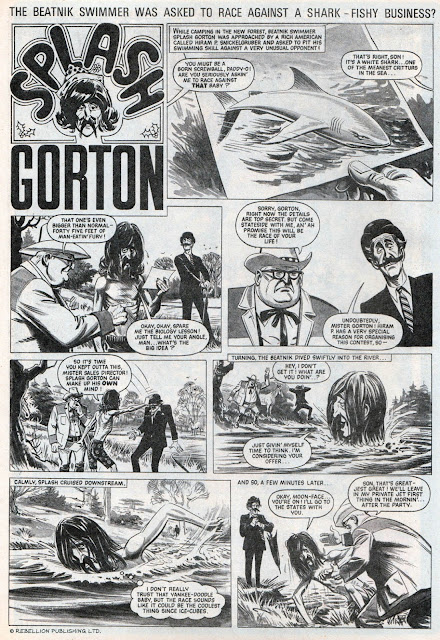 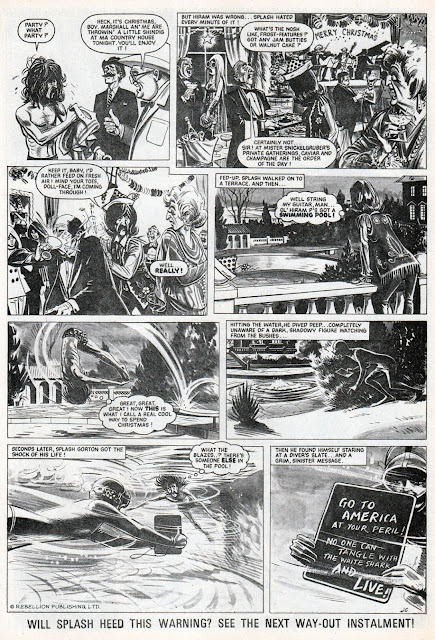 War and football were the two mainstays of British adventure weeklies and Tiger combined them into one strip with The Barbed Wire Eleven, about British P.O.W.s forming a football team. Art by Jim Bleach. 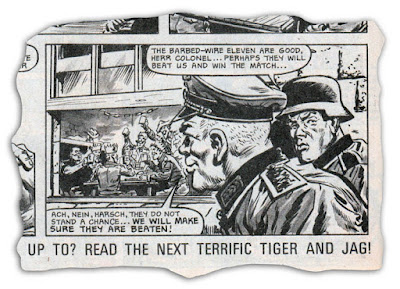 The centre page strip was a delight. Football Family Robinson was always entertaining, and John Gillatt's artwork was fantastic. The strip was originally drawn by Joe Colquhoun, a hard act to follow, but John did a superb job. 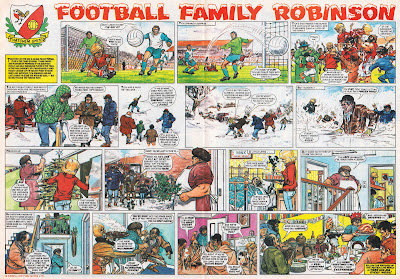 An advert for that year's annuals, plus a notice about the impending change to decimal currency that would come into force 14 months later... 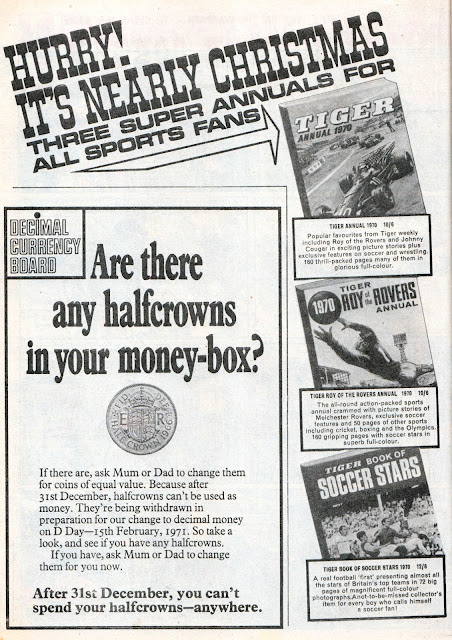 Nosey was Tiger and Jag's single humour strip. The art looks a lot like the work of Chas Sinclair but I'm not sure if it is his or not. (At that time he was freelancing for TV Comic on Basil Brush.) 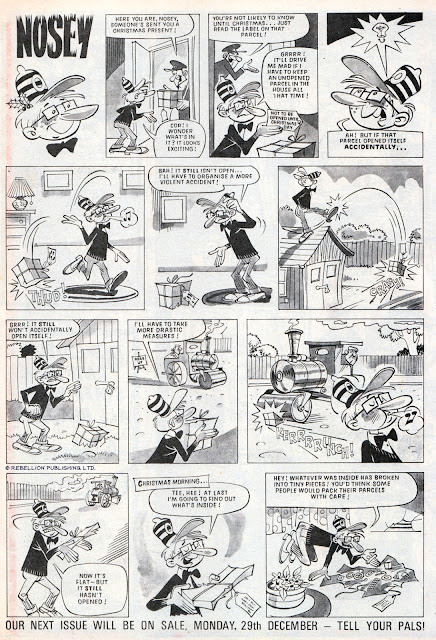 Another snowy strip ending with a Christmas feed, Typhoon Tracy was drawn by Graham Allen, who had previously illustrated many humour pages for the Odhams comics. A skilled artist who could do both funnies and light adventure. 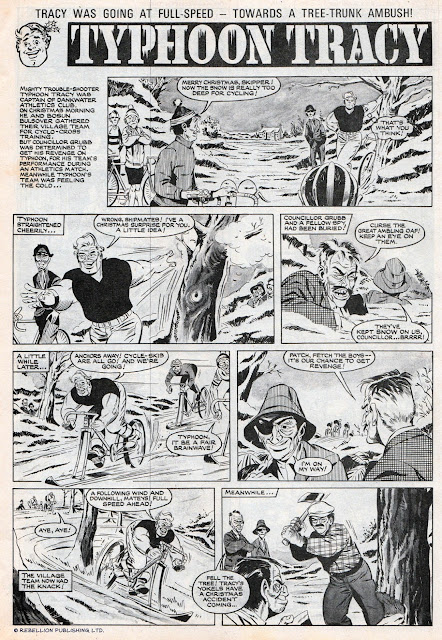 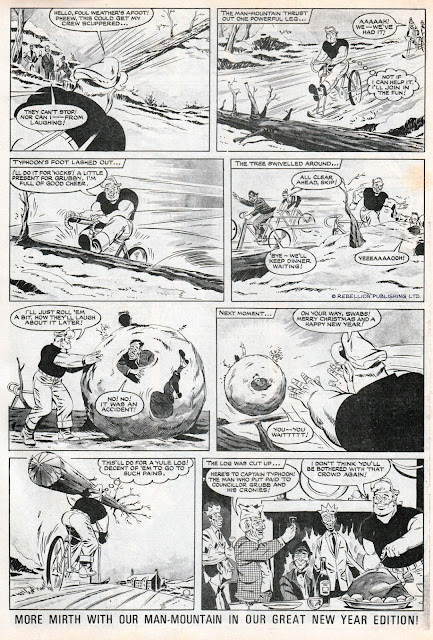 There'll be another Christmas comic tomorrow! Visit the blog again to unwrap it!

Christmas was better when there were Christmas comics like this.

And your post reminded me that Splash Gorton has his own strip before he became Johnny Cougar's sidekick.

We still do Christmas comic strips when we can. Unfortunately this year Toxic doesn't have a Christmas theme. Epic does, but I wasn't sent a festive script. I did a Christmas strip for Doctor Who Magazine though!

I was wondering when/if your festive masthead would appear this year :)

It's been there since Saturday, Colin!

Note: The change to decimal currency came one year and two months later

Correct. I should have said that, especially as I'd covered it previously:

Yes, I've corrected it. Thanks for pointing out my mistake.