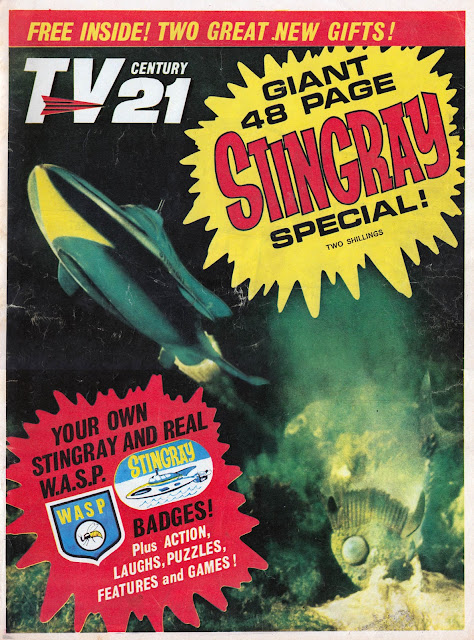 For comic collectors, there comes a moment when you realise it's time to stop buying back issues. Usually when the house is full of comics that took you 50 years to buy and you know you don't have another 50 years ahead of you to read them all again. The other incentive to stop is when you realise you've acquired all the issues you ever wanted.

TV 21 Stingray Special was a comic I had when it was published in 1965, but as I didn't start collecting until 1967 I binned it after reading it. I've re-acquired all the other comics from that period I wanted, - and more, - by completing runs that I'd hadn't originally, but this Special had proven to be elusive, - until last week. (I'd bid on copies in the past but had missed out.)

Like the final piece in a jigsaw puzzle, it gave me a sense of completion to buy it on eBay. It wasn't cheap, but it's in great condition and, if this is to be the last back issue I buy, then it'll have been worth it.

TV21 Stingray Special was the very first "summer special" for TV Century 21, although there would be two more that year (TV Century 21 Summer Extra and TV Century 21 International Extra). It included two free sticker badges made of fabric, which I wore proudly on a summer blazer I had. (Hey, I was only six.)

As the title suggests, the 48 pages are completely dedicated to Stingray and no other strip from the TV21 weekly. Stingray was very popular on TV at the time and was yet to be overtaken by the debut of Thunderbirds later that year. The contents are a mixture of comic strips, a couple of prose stories, and what modern fans would now call "filler", with puzzles, games, and articles on sealife, sea faring vessels etc. 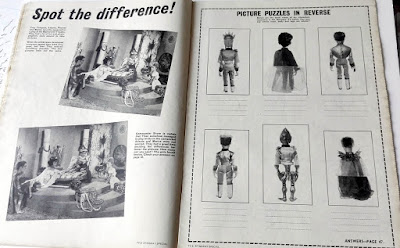 The opening spread gives us an introduction by "Troy Tempest" (in reality editor Alan Fennell) and an Oink the Seal half pager drawn by George Parlett (brother of fellow cartoonist Reg Parlett). Oink was an occasional comedy-relief character in the Stingray TV series... 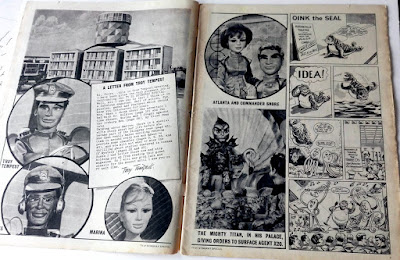 Next we get a four page Stingray prose story, Barracuda 5, illustrated with photos from the show. As the publisher City Magazines worked in close association with A.P. Films (and later Century 21 Publishing) photos were easy to come by for the comic. Especially with the editor also being a writer on Gerry Anderson's shows! 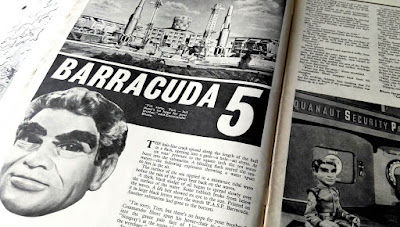 Here's another Oink the Seal story by George Parlett from the issue, this time in colour. The top class 'Photogravure' printing method was perfect for reproducing painted artwork. 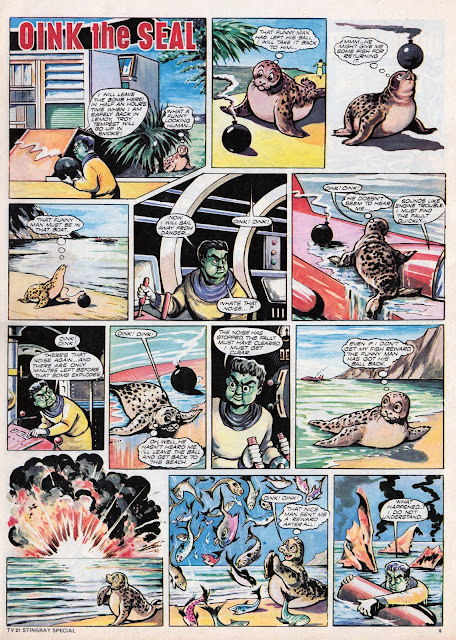 Nest, a Stingray story, Double Trap, illustrated by Ron Turner, one of the best artists of the period. Good as Photogravure printing was, it was also expensive, so the first two pages of the story were in black and white, and the last two in colour. Turner was ideal for this, being accomplished in both black and white and rich colour artwork. Here are pages one and four of the story... 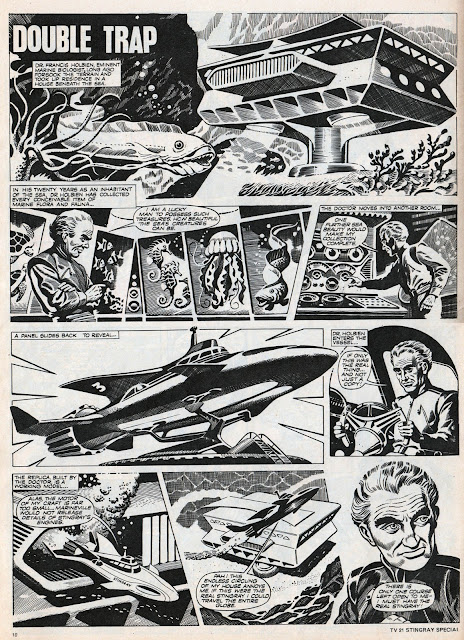 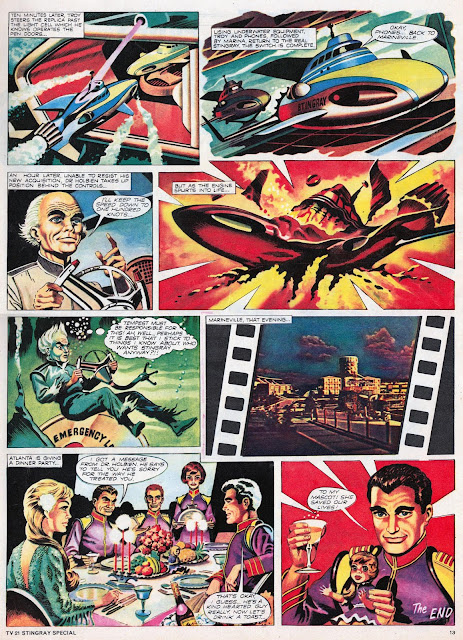 After several pages of puzzles and features (far too many, I thought) the centrespread of the comic features a board game. I remember playing this back then with my mum. It was always nice to have a board game in the middle of a summer special. 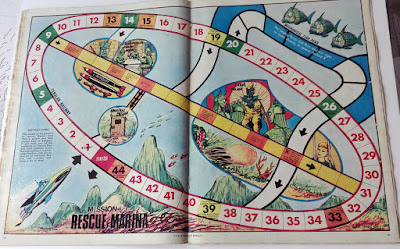 After a few more feature pages and another prose story, we come to The Big Freeze, a four page Stingray strip drawn by Ron Embleton. Again, two pages in colour, two in black and white, but such quirks were commonplace in Sixties comics and we didn't mind. 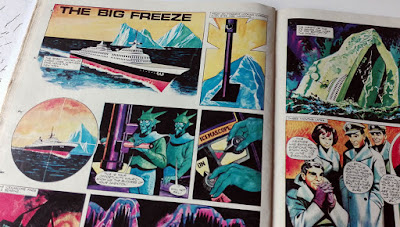 A few more puzzles and suchlike and we have the final strip which features Marina, Girl from the Sea. It tells the story of how Marina came to be Titan's slave, which was never revealed on TV, and ends with scenes adapted from the first Stingray episode where Troy and Phones free Marina. 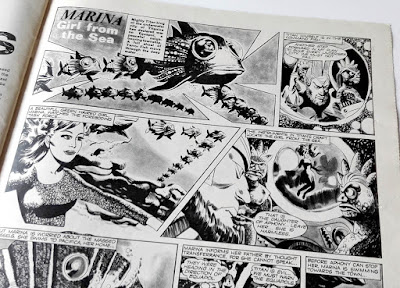 I don't know who drew the Marina strip. It's a bit awkward in places because although the artist is skilled he's trying to draw the characters' bodies too much like the TV puppets instead of representing them as humans with realistic proportions, as other artists did. 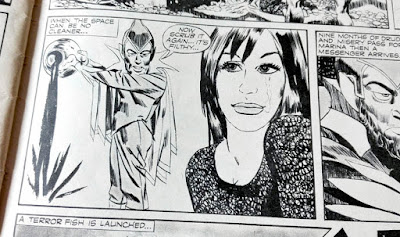 ...and that was the TV21 Stingray Special. Some parts of it rang bells from my childhood, but most of it I hadn't recalled. A tad too many feature pages, and only 15 and a half pages of strip out of 48 pages, no doubt to keep it in budget. However, the quality of art by Turner, Parlett, and Embleton is first rate and overall it's a nice thing to have... again, after 53 years!

If these strips seem familiar to those of you who are younger than me it's because they were reprinted in Egmont's Stingray comics of the 1990s, but for my money you can't beat the original comics in their large tabloid size!

mm.. the girls seem better than me at spotting the difference.. I'm on 3..

Always preferred Stingray to Thunderbirds.. much better intro.. even if anything happening in the next half hour was mostly just Titan getting Agent X-2-0 to either recapture Marina or just to randomly attack the surface... I think the humour was more at it's best for Stingray but when Thunderbirds happened, it was more trying to be too serious about itself..

I must have had this as I can remember the badges but nothing else about the issue. Ron Turner's work for the Gerry Anderson titles was amazing. I keep seeing a resemblance to Robert Vaughn in that last panel.

Thanks Lew for showing us...
Some of the pictures of Marina has you said look good...a strange mix...

I never had this as a kid, but for holiday reading one year I did buy a copy of the paperback “Stingray and the Monster” by John Theydon (a pseudonym used by more than one author, I believe, some better than others). That wasn’t cheap either, but at least I kept it. Marina’s origin also features on the record “Marina Speaks”, not sure if it’s at odds with the strip in this Special, but essentially if she ever says anything, Titan has some means of ensuring some of her people will die.

The Marina story in the special doesn't explain why she can't speak. I think we're supposed to assume she's simply telepathic and her race don't vocalise. However, the Marina serial that ran in Lady Penelope a year later was a prequel to Stingray, where she can speak, and it leads towards the reasons of her silence, which I think was the same explanation used on the record you mention.

I remember this holiday special with great affection. I think it might have been the first time I saw Ron Turner's beautiful artwork. Not long afterwards, he drew most of the content for the second Stingray Annual, the first strip in that book being a story called The Collector. It struck me at the time how similar certain elements of that story were to the holiday special strip, Double Trap: A balding scientist obsessed with obtaining Stingray, living in an undersea lab with splayed aerials on the roof, for example. Maybe you could compare them, Lew?

I'm afraid I don't have that book, Ric, and have stopped buying old comics now.