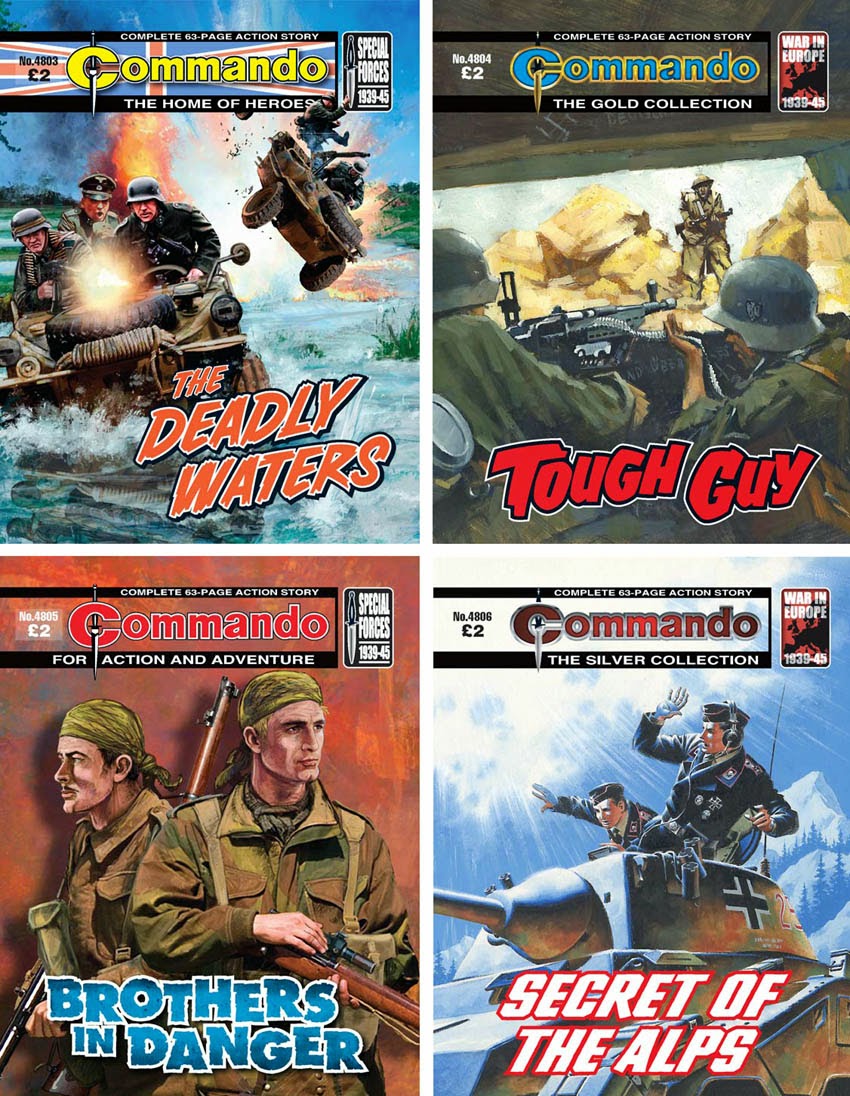 Commando No 4803 – The Deadly Waters
When German forces invaded the Netherlands in 1940, Dutch Army Lieutenants Dirk Dreise and Ruud Aaker fought in the front line. The campaign went against them, though, forcing them to escape to England where they were assigned to clandestine intelligence work.
Eventually the tide of war turned and in 1944 they were back in their homeland, determined to throw the invaders out. For them, the fighting raged not in the air or on land but on the waters of the flooded polders.

Commando No 4804 – Tough Guy
Joe Brady was as tough as the Liverpool slums that had bred him — and, boy, he could hate!
The many Nazis he met knew the cold ferocity which blazed in his eyes as he swept into battle, but they could tell no one.
For dead men tell no tales.

Introduction
Some of you may wonder how we choose which titles to let you read again. Well, there are loads of different reasons but, it the case of this story, one trumps all others. It was drawn by Victor De La Fuente and, as far as I’m concerned, any excuse to let you see his magnificent art is good enough. I grew up reading Commando stories and his illustrations never let me down, combining accuracy, aggression and activity in every frame.
Victor’s style influenced many other artists, and at least one reader, to get involved in comics. Thanks, Victor.

Commando No 4805 – Brothers in Danger
Canadian sniper Michel Caron had been recruited by Gabe Dubois, his adopted brother, for a special mission that required expert, high-precision shooting.
In the bombed-out ruins of Caen in Northern France, death lurked in every shadow — and the brothers soon realised that both of them would have to be ready to sacrifice anything, even their own lives, to complete their deadly task…

Commando No 4806 – Secret of The Alps
All it took was one shot from a flare pistol to bring the entire German armoured column to a chaotic standstill.
There was no shock wave, no heat blast…just a silent explosion of brilliant light that blinded every pair of eyes within a mile. Even inside tanks there was no protection from this unearthly glare, this terrible…

Secret Of The Alps

Introduction
Saichan — responsible for the inside art here — drew 13 Commandos in total. Well, not quite, his final book (Unlucky 13) had to be finished by another artist. The reasons are lost in the mists of time but it wasn’t due to lack of quality for his style — though quirky, and cartoon-ish in places — is certainly effective.
The story is classic Alan Hebden, a man well known for intricate plotting and (just) believable secret weapons. He was on his game for this one!
Saichan’s Unlucky 13, by the way, featured some of Commando’s early recurring characters — The Bomb Gang. This story is as explosive as any of theirs.

Thanks John. Still not 100% but better than I was.