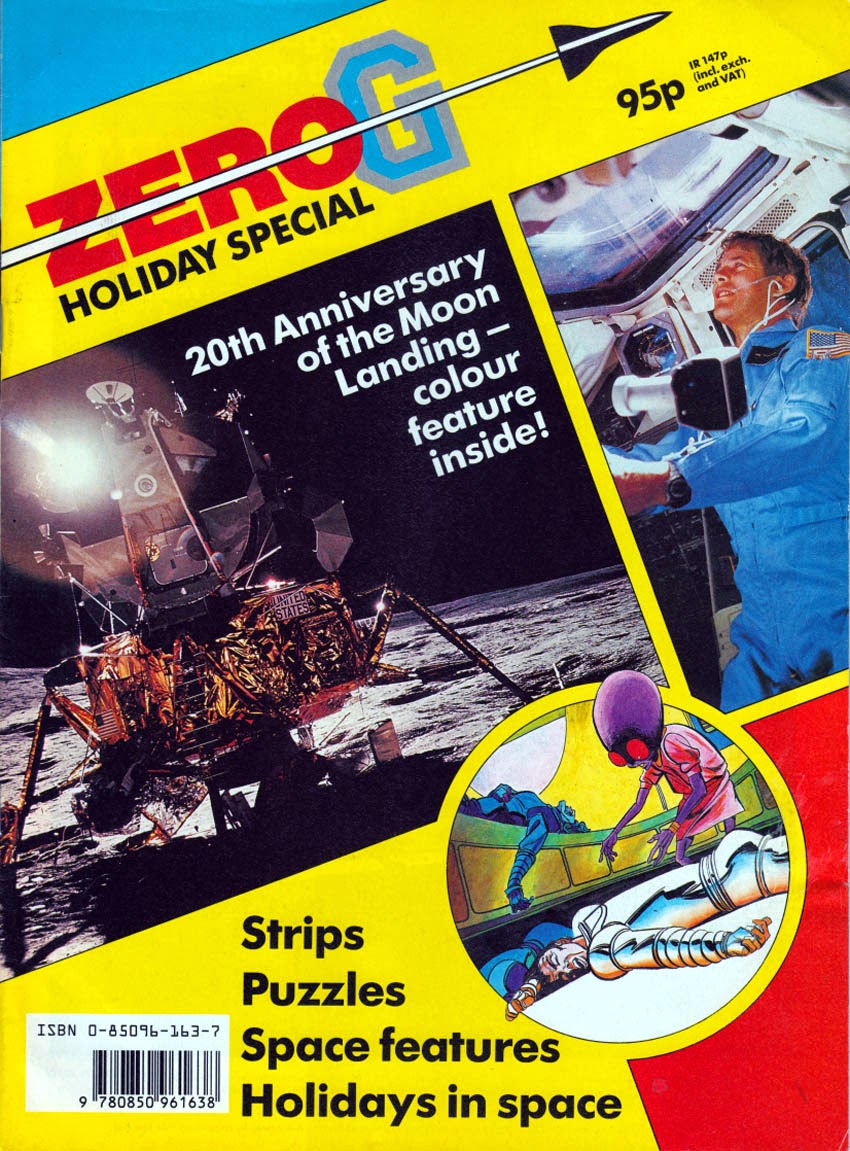 Back in 1989 to celebrate the 20th anniversary of the moon landing, Polystyle Publications gave us a comic themed around science fact and fiction. Its name was Zero-G.

Of course Polystyle were famous for publishing TV Comic, Pippin and Countdown / TV Action but Zero-G may be new to you. It'd be understandable if you missed it as there was only this one issue published as a Holiday Special. After the summer of 1989 it vanished from the shelves as though it had never existed. 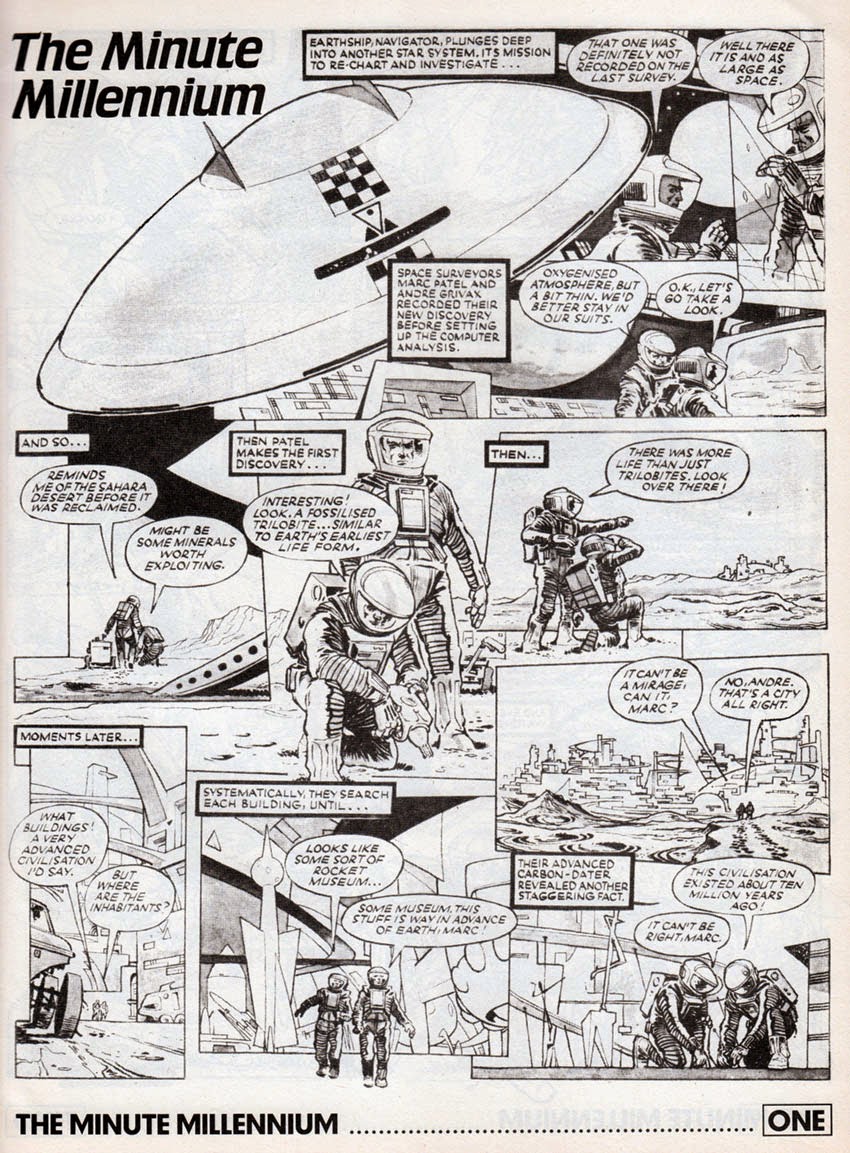 The contents of this 48 page special contained a mixture of factual articles on space exploration and a good selection of complete adventure strips. However, the strips were all reprints from the 1971 comic Countdown. 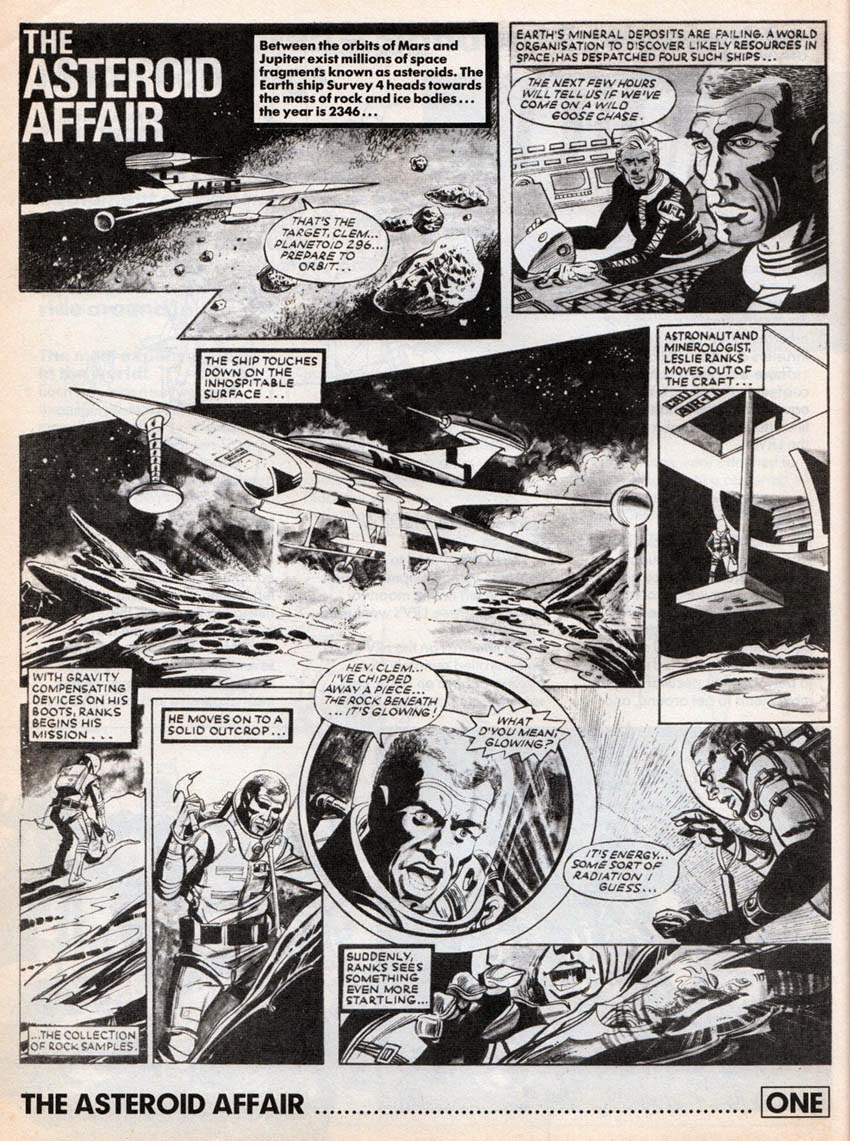 Although most of Countdown's strips had been based on TV shows it also sometimes featured all-new complete sci-fi stories with no connection to any television series. It was these strips which were collected into the Zero-G Holiday Special. Great material too, with artwork by Brian Lewis and Martin Asbury. 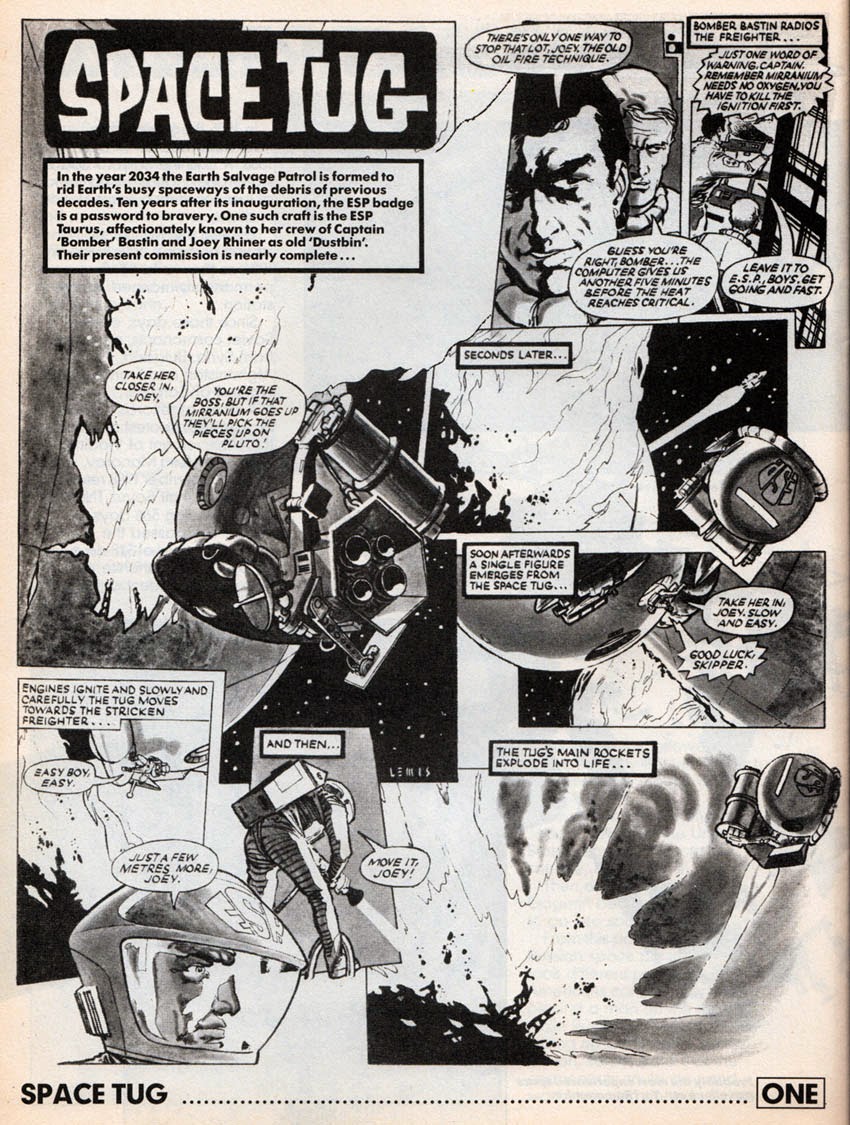 There was also a four page text story Dangerous Friend reprinted from the Countdown Annual 1972 that had been laid out differently. This Martin Asbury illustrated tale featured the cast of the Countdown ship, the originated strip from the comic of that name. 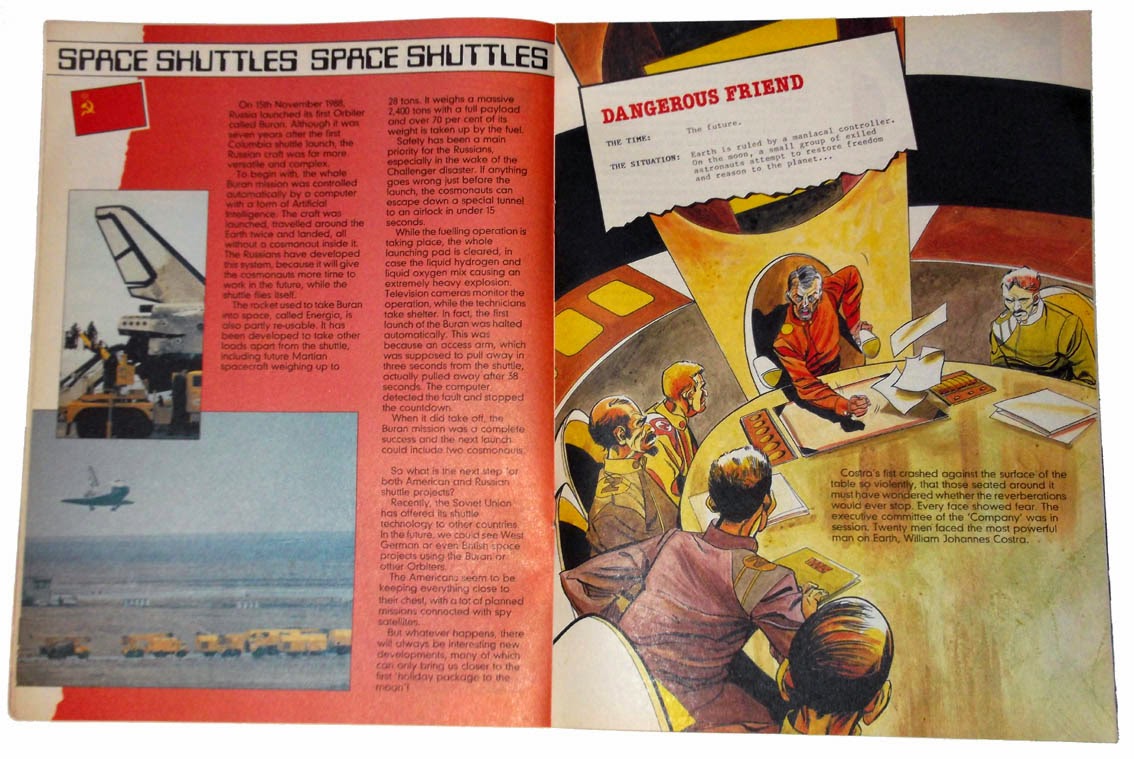 Talking of layouts, the strip Murder on Ice bizarrely broke its continuity halfway through to feature a few joke cartoons, which seemed a bit foolish and unnecessary. 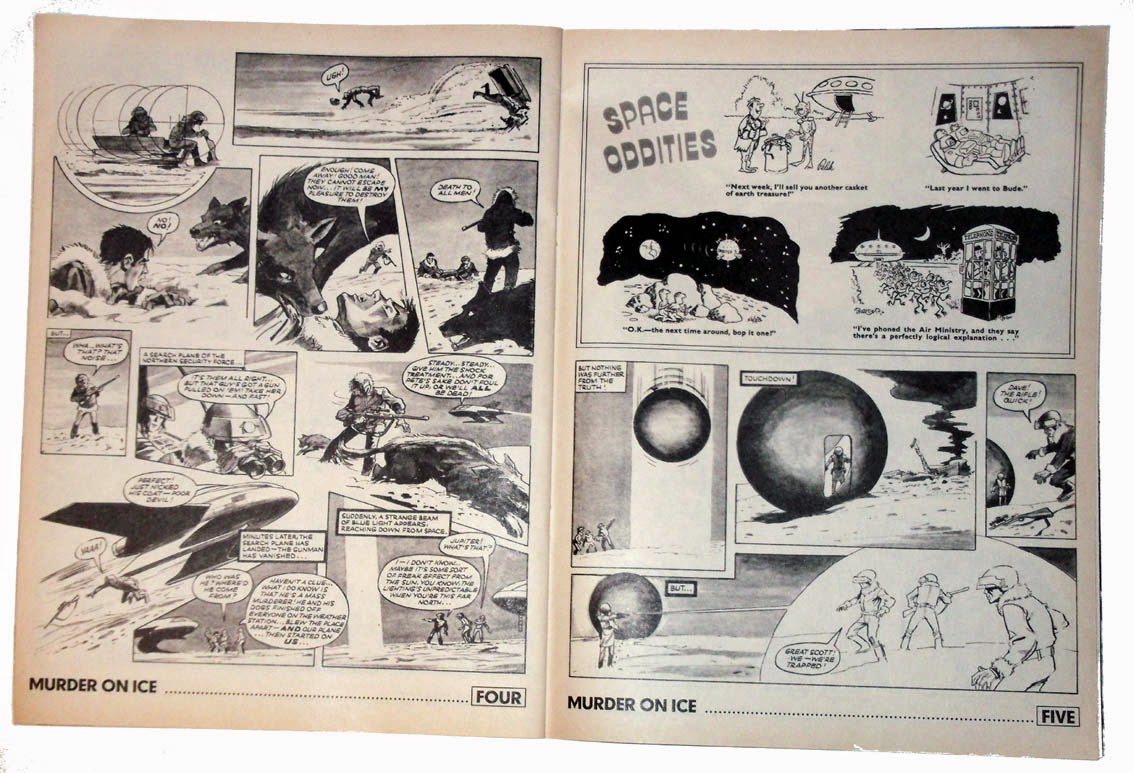 Was Zero-G intended to spin off into a regular comic? Possibly not, as there wouldn't be enough non-TV reprint left to fill the pages of an ongoing title, unless Polystyle would be willing to finance new material. That seemed unlikely, given that the Holiday Special was obviously done on a limited budget. Even the rocket icon on the cover had been lifted from the old Countdown logo. Times must have been hard not to afford a one inch drawing of a new rocket. 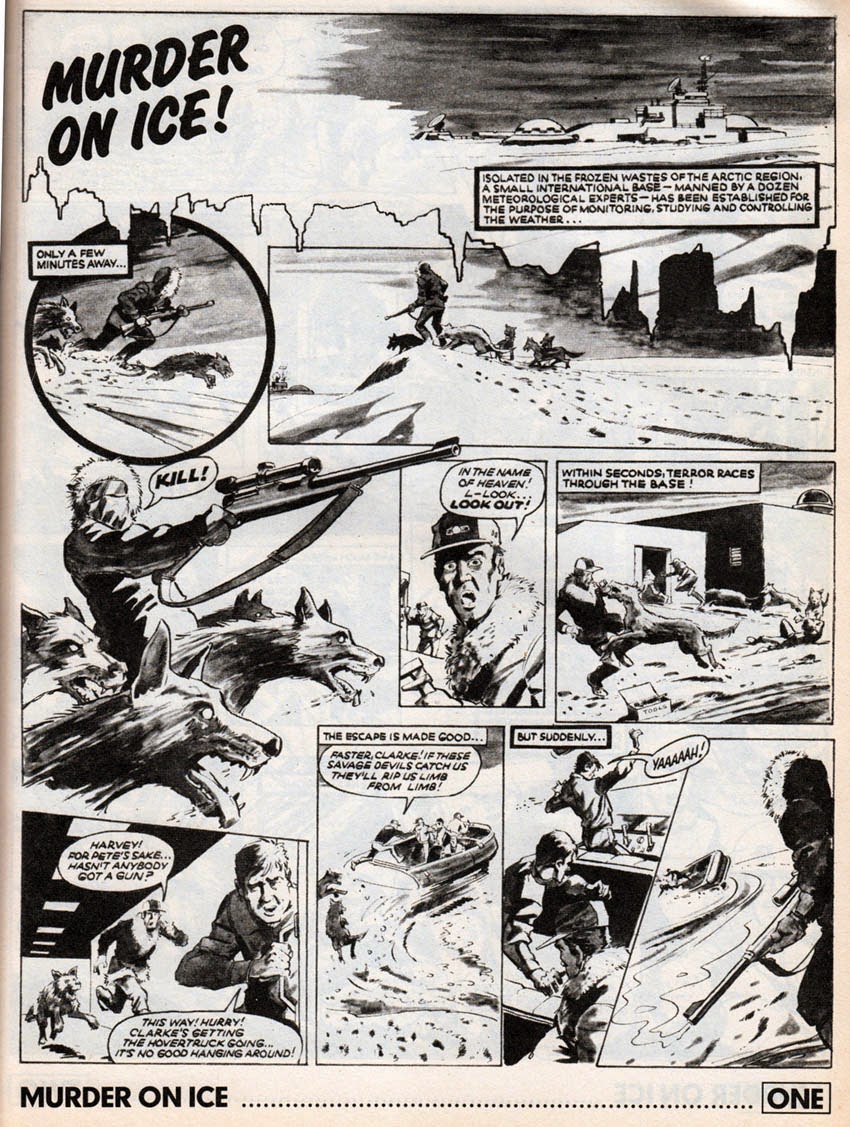 So the Zero-G Holiday Special was a here today, gone tomorrow publication, passing like a comety candle in the wind burning up on re-entry lost in splashdown, add your own metaphorical analogy thing. Like Polystyle's parrot it had ceased to be.
Posted by Lew Stringer at 00:15

I really can't make up my mind whether it is an excellently done April Fool's Day post or not. Either way, I enjoyed reading it.

Now that it's after mid-day I can reveal that....

....it's a genuine comic. I had written the post in a way that I hoped some might think it was an April Fool (because I've done faked comics in 1stApril in previous years) but it fooled no one.

Yep, one off holiday special from 1989. Apparently rarer than the Countdown comics it reprints from.

Lew, I came here after just adding another comment to your previous post and I thought, "Huh! I may be dumb, but I ain't THAT dumb! I know what day it is!"
Scrolling down, I thought, "By, he's put a lot of effort into it, though!"
Guess what, I AM that dumb! - You double-bluffed me!!

I could've understood if people did think it was an April Fool - I didn't realise Polystyle were still around in 1989. Who would own the rights to their titles these days? Wikipedia says they closed due to insolvency in 1997.

Phew I'm glad to read that as I thought I remembered this ( the comic pages with the title of the strip at the bottom of each page rang a bell) at ,my age I have to worry about imagining things and reality - a strange one off all the same.

you fooled me I thought it was a made up comic...

It is a real oddity - but real enough. I seem to remember it came out around the same time as Fleetway's Classic Action Special. Both lovely little reminders of the 'good old days'.

I'm pleased (in a Dennis the Menace way) that it fooled a couple of you anyway. I've been thinking about this double bluff since last April! :)

Yes it's real and well worth seeking out for the great artwork by Asbury and Lewis. 30 of the 48 pages are stories.

James, that's a very good question about rights. I'll try and find out.

"Here today gone tomorrow..." You fooled me Lew, just as intended. Well done - and thanks for sharing this as I've never seen it.

Polystyle became dormant around the time Hooper left, I think; Buttons, their only remaining title, was transferred to another Argus Press-owned company but didn't last long. I think John Freeman did some research into rights for Doctor Who reasons and found Polystyle's archive assets were folded into one of Argus's regional newspaper firms which was later sold to Trinity Mirror.

Thanks Matthew. I asked around about the rights but you're the only person who's responded.