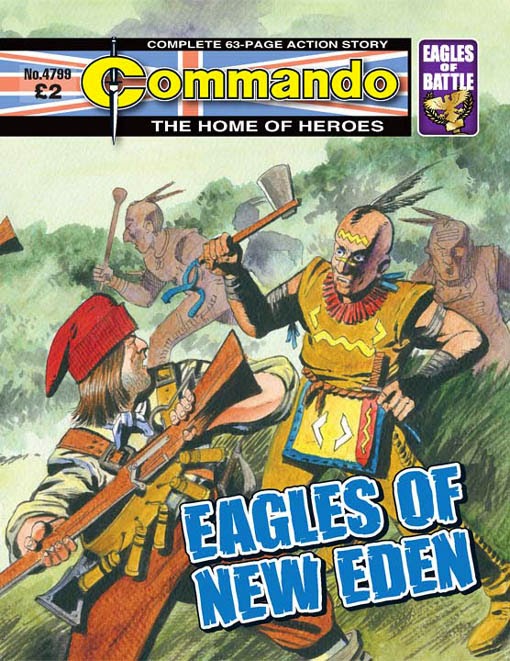 Commando No 4799 – Eagles Of New Eden
After the tumultuous events of the English Civil War, Sergeant Samuel Carrick and his fellow Roundhead soldiers were victorious but disillusioned. So disillusioned, that they sailed away to start new lives in the far-off Americas.
The idyllic farming colony they established was christened New Eden. Here they worked hard and lived peacefully off the fruits of their labours.
This peace was shattered when enemies old and new stood against them. It seemed Samuel and his comrades would have to fight for their lives once more…

With only a few notable exceptions — step forward the Convict Commandos — recurring characters have been rare on the pages of Commando over the last 50-odd years. However we were of the opinion that you, our readers, might like a series which carried the story over more than one issue. With the pen of Ferg Handley recruited to do the writing, we decided that a historical saga spanning many generations would hit the spot.
Episode Seven sees the stories of three inter-linked families continue in the aftermath of the English Civil War. Although supposedly a time of peace, there were still many factions in society at loggerheads. In order to live the way they desired, many opted for new lives across the Atlantic. As some of our characters found out, this was a hard existence, fraught with danger and disaster. Our story is, of course, fiction but the experiences of our heroes are not far from the truth as encountered by many.
We hope you enjoy this story and the journey to come.

Commando No 4800 – Flying Fools
Flight Lieutenant Roy Ogden was a pilot who fought and flew strictly by the book. He had a neat, tidy squadron that fought neat, tidy air battles and got quite good results…quite good.
Then a big Texan pilot called Mike McClusky arrived on the scene; a daring, slap-happy flier who roared, “Get in and mix it, boys!” across his radio. Suddenly the results were terrific.
That was when Roy’s neat, tidy squadron changed into a bunch of…

As you can imagine, working (ha!) here, we get to read a lot of war stories of all flavours. Despite the numbers of them, only occasionally do you get one that combines all the “classic” elements of a war story. This, however, is one of those. Not wanting to give the game away, I’ll refrain from itemising them, but you’ll know them when you see them. What’s more, with a bit of disbelief suspension, they come together to make a cracking story.
Backed up by Sostres’ contrast-heavy inside art, the plot the story that waits behind Ken Barr’s cover is well worth the investment of your time. 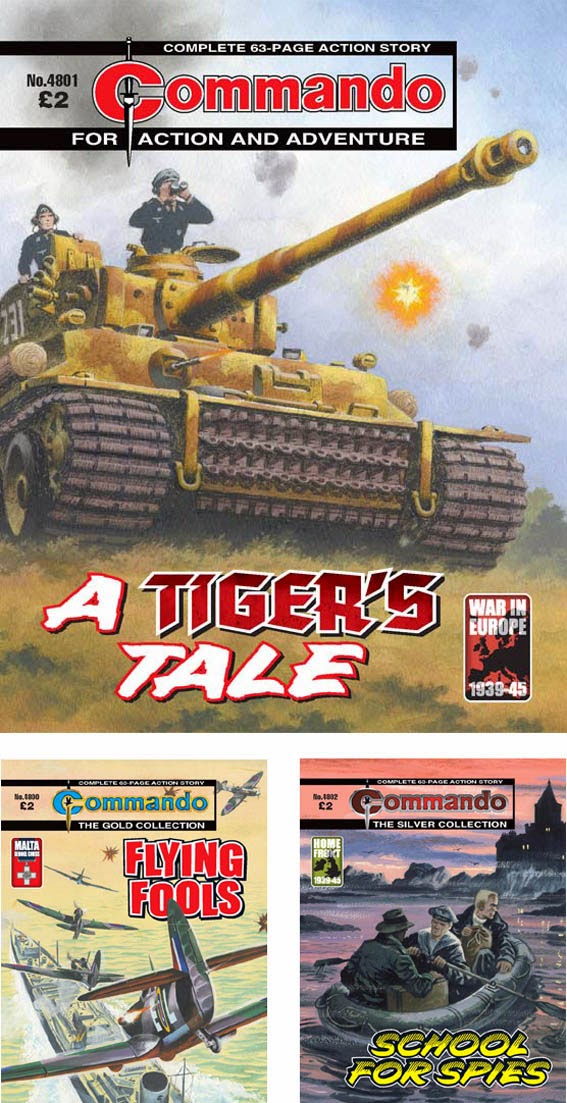 Commando No 4801 – A Tiger’s Tale
“Tiger!” — a cry that struck fear into many a soldier’s heart during the Second World War. Little wonder when it meant that you were about to encounter 50-odd tons of armoured might, impervious to all but the heaviest weapons and with an 88mm gun whose shells could punch right through another tank from a mile away.
Tanks, though, don’t operate themselves — they need crewmen. Crewmen like the five here who will tell you…

Commando No 4802 – School For Spies
High on a rocky crag on the west coast of Scotland stood Whitecrest House, home of the Mackay family of Strathfiddich. Over the centuries its grim, stone walls had looked down on many tales of bravery, mystery and intrigue.
Now, in the Second World War, it was being put to a peaceful purpose — a boarding school for boys. But what the boys didn’t know was that under their feet, in hidden cellars and dungeons, was another kind of school, where the students had names like Kurt…and Hans…and Ernst…

The Ed and I have often wondered why espionage stories are slightly more difficult to do in Commando’s format, compared to traditional military action —difficult, but not impossible as this book certainly is a success. The main bugbear is that spy tales tend to involve a variety of people standing in shadows, talking to themselves (usually explaining the plot) in lots of “thought balloons”; and then we might have several pages of more explanations, sometimes done in flashback. All of this is fine, of course, but can grate a little over 63 pages.
However, this yarn is thoroughly entertaining, with lots of incident and interesting characters — ensuring that School For Spies is a class act. Top marks all round!