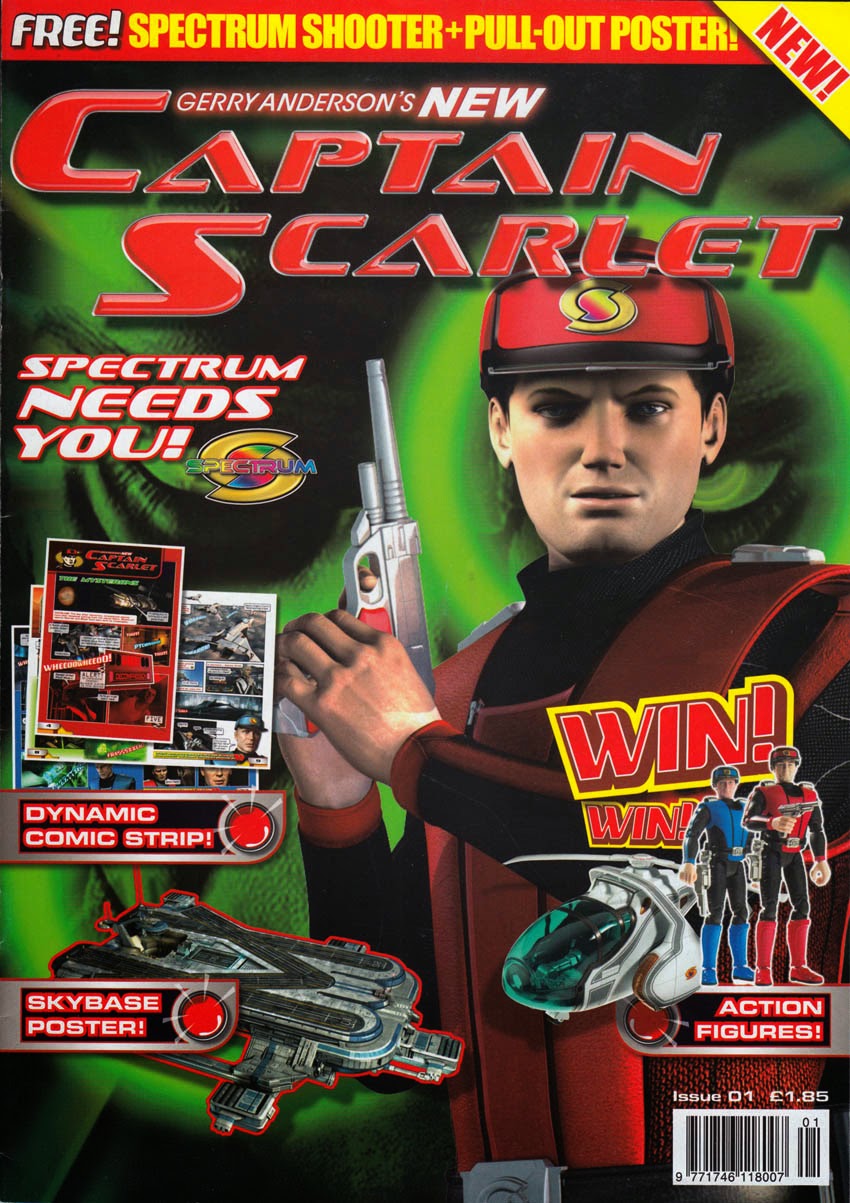 With the brand new Thunderbirds Are Go series starting on TV on Saturday 4th April (5pm ITV) I thought it'd be appropriate to look back at a comic based on the previous Gerry Anderson show that was resurrected. In 2005 a new all-CGI version of Captain Scarlet debuted on ITV. Despite being an impressive series with some solid storylines each episode was split into two parts by ITV and buried within some Saturday morning sub-par Tiswas type show. Subsequently it failed to reach all of its potential viewing audience. 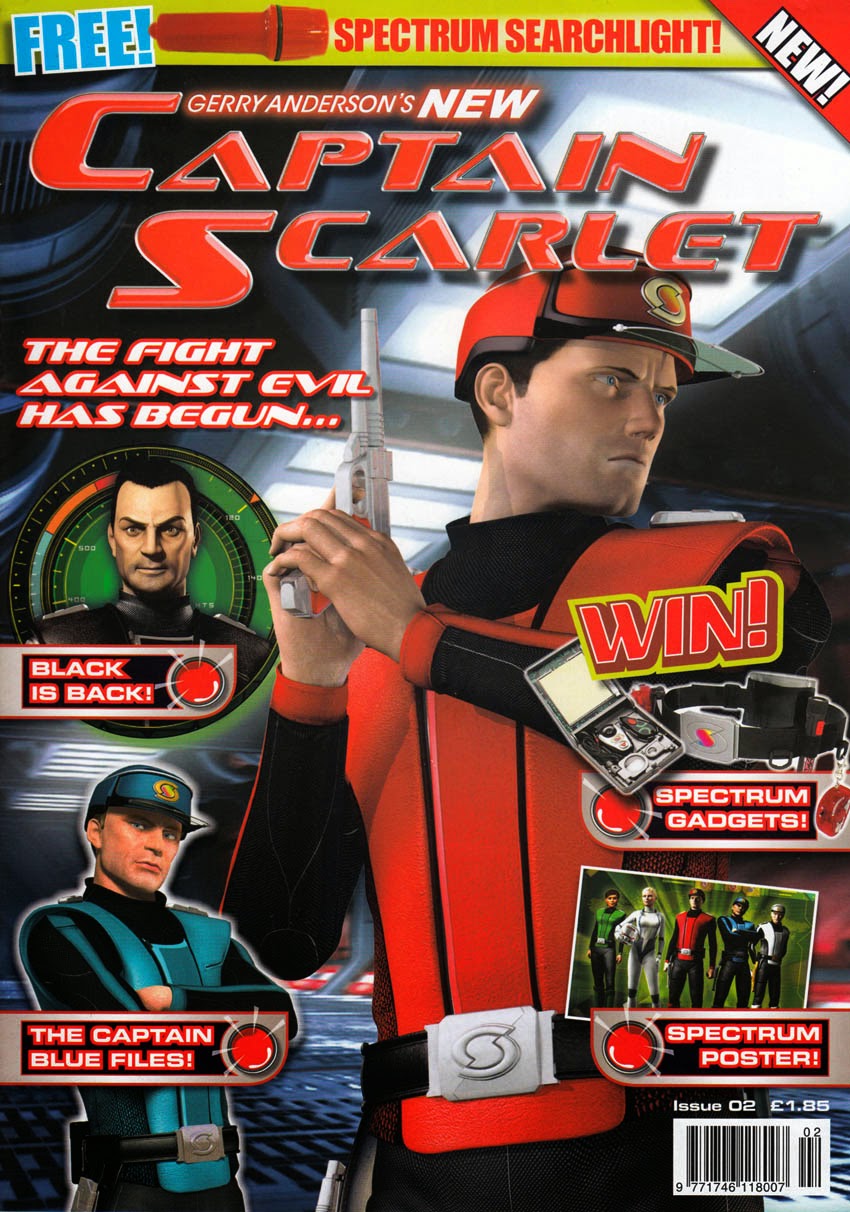 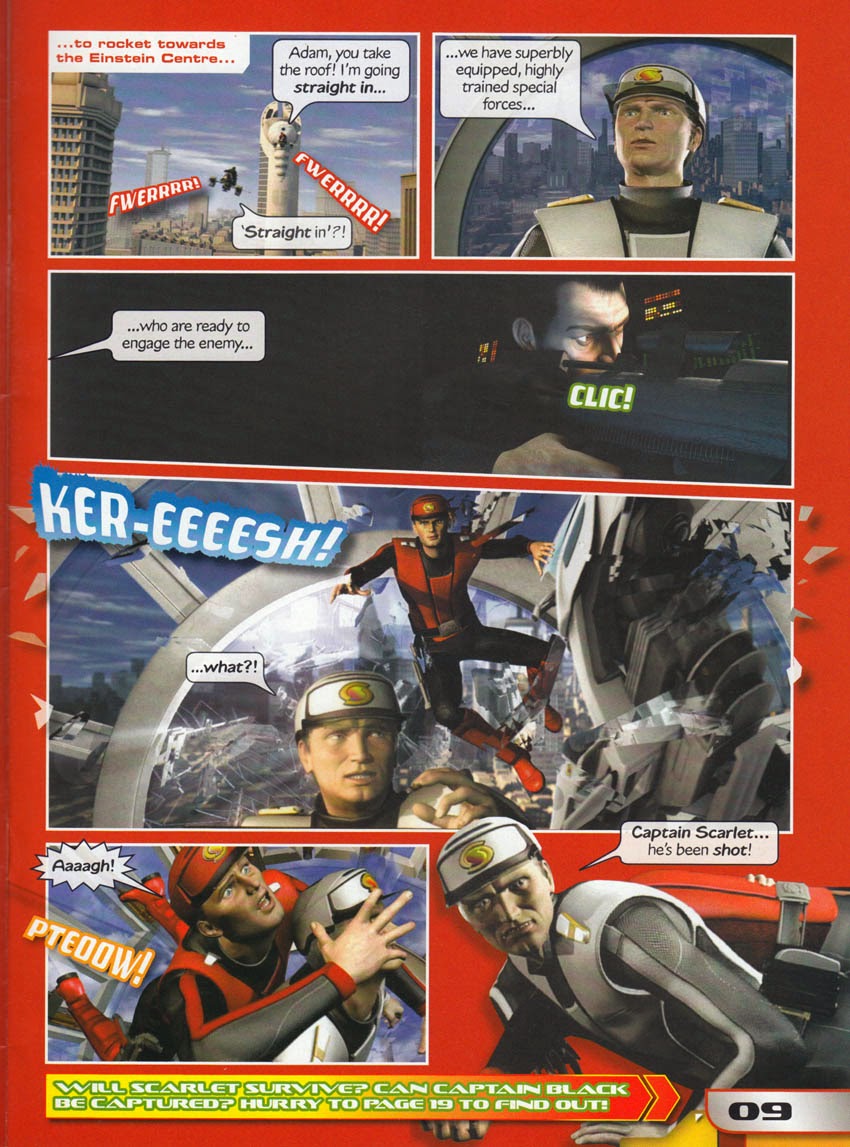 Nevertheless, a contract had been agreed with John Brown's company GE Magazines to publish a magazine based on the series so in October 2005, the first issue of Gerry Anderson's New Captain Scarlet appeared in newsagents. 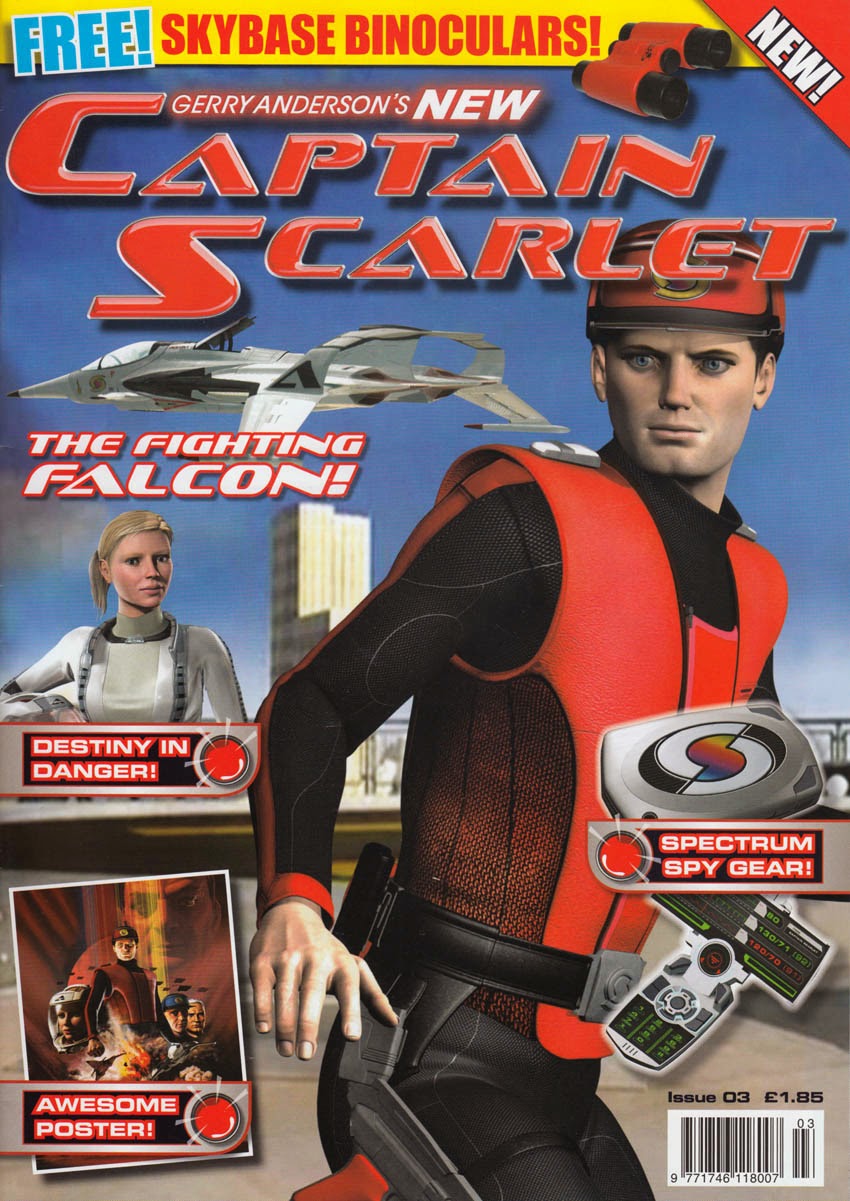 Considering the poor treatment the TV series had suffered it won't surprise you to hear that the magazine didn't fare too well. Only six issues were published. However, I for one felt it was a few notches above the usual licensed titles of recent years and deserved to succeed. 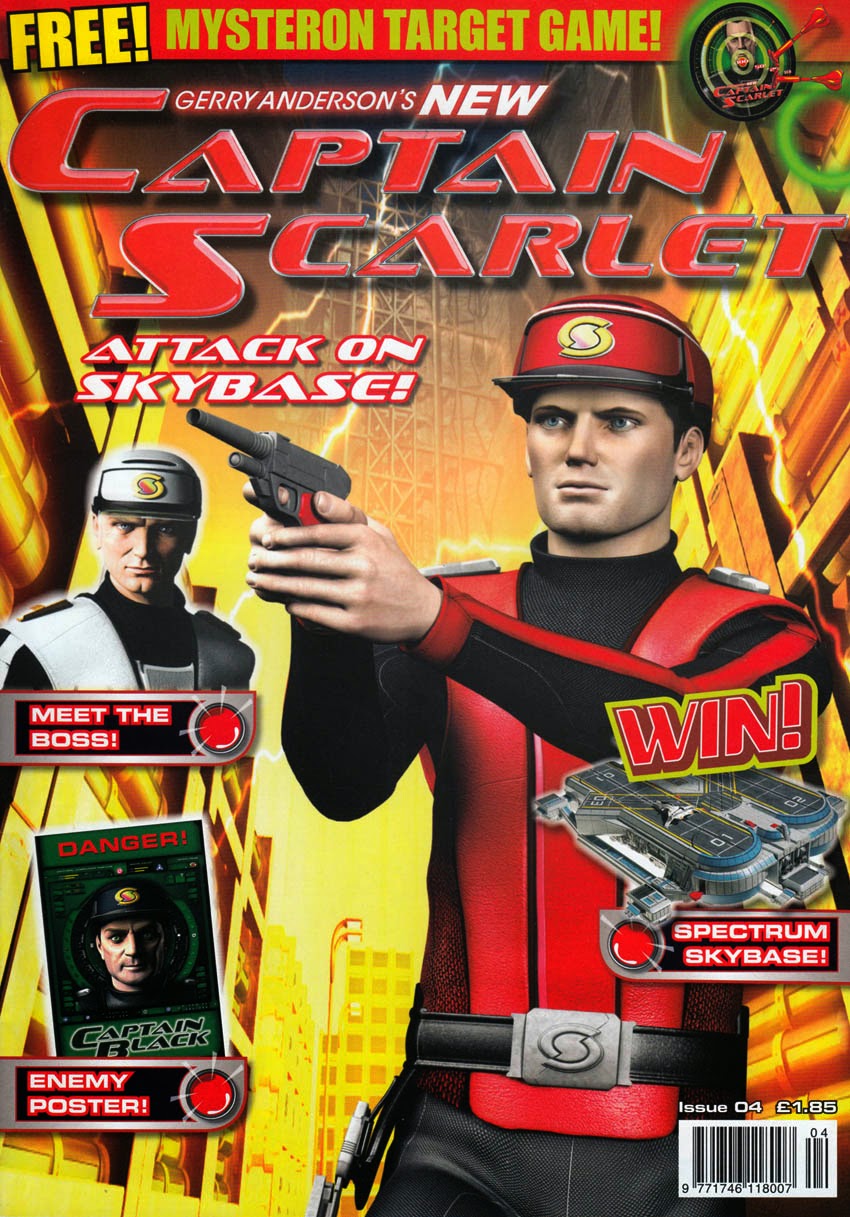 Any editor putting together a licensed comic these days will often have to do their best with limited resources and material. What editor Will Potter did with the New Captain Scarlet mag was to use screen grabs of the TV episodes to produce photo strip adaptations. Depending on the grabs, and the limitations of condensing a 20 minute story into an 11 page strip, the results were varied but on the whole suitably dramatic and engaging. 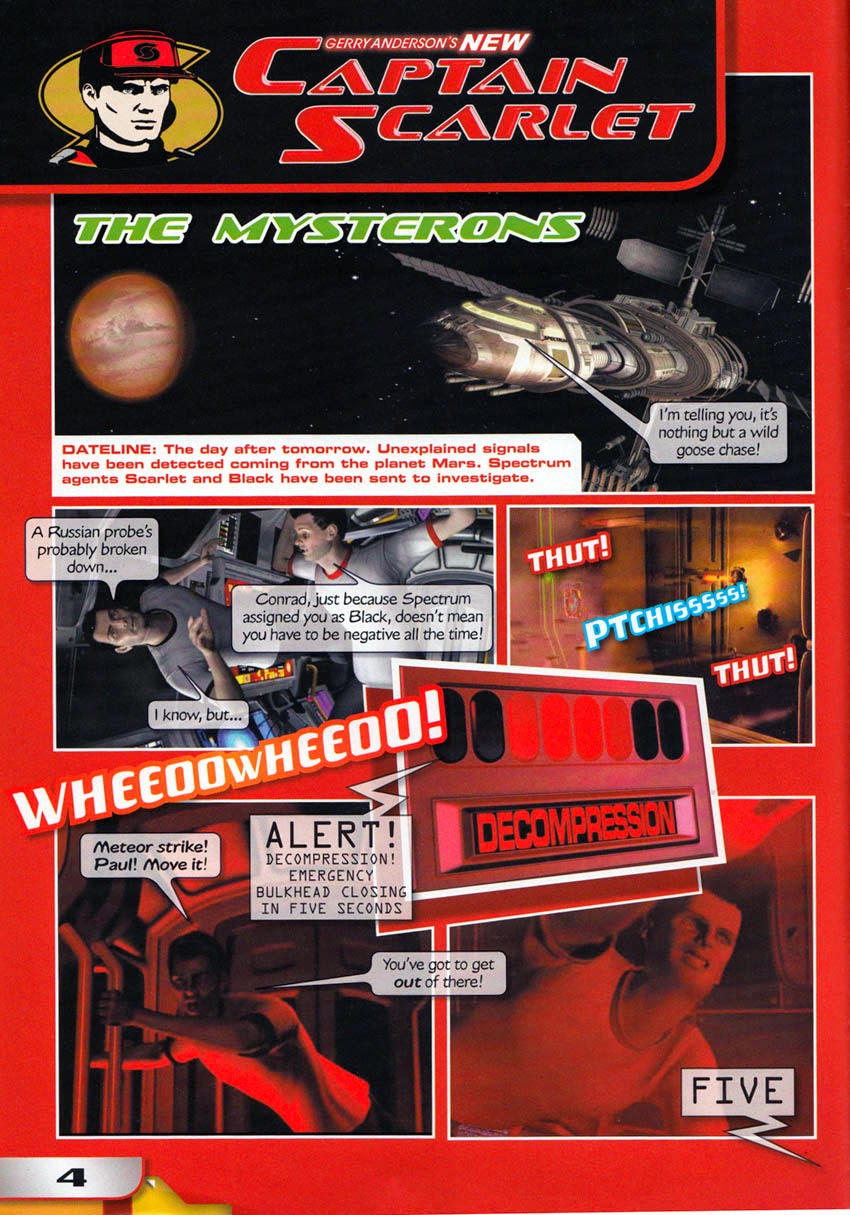 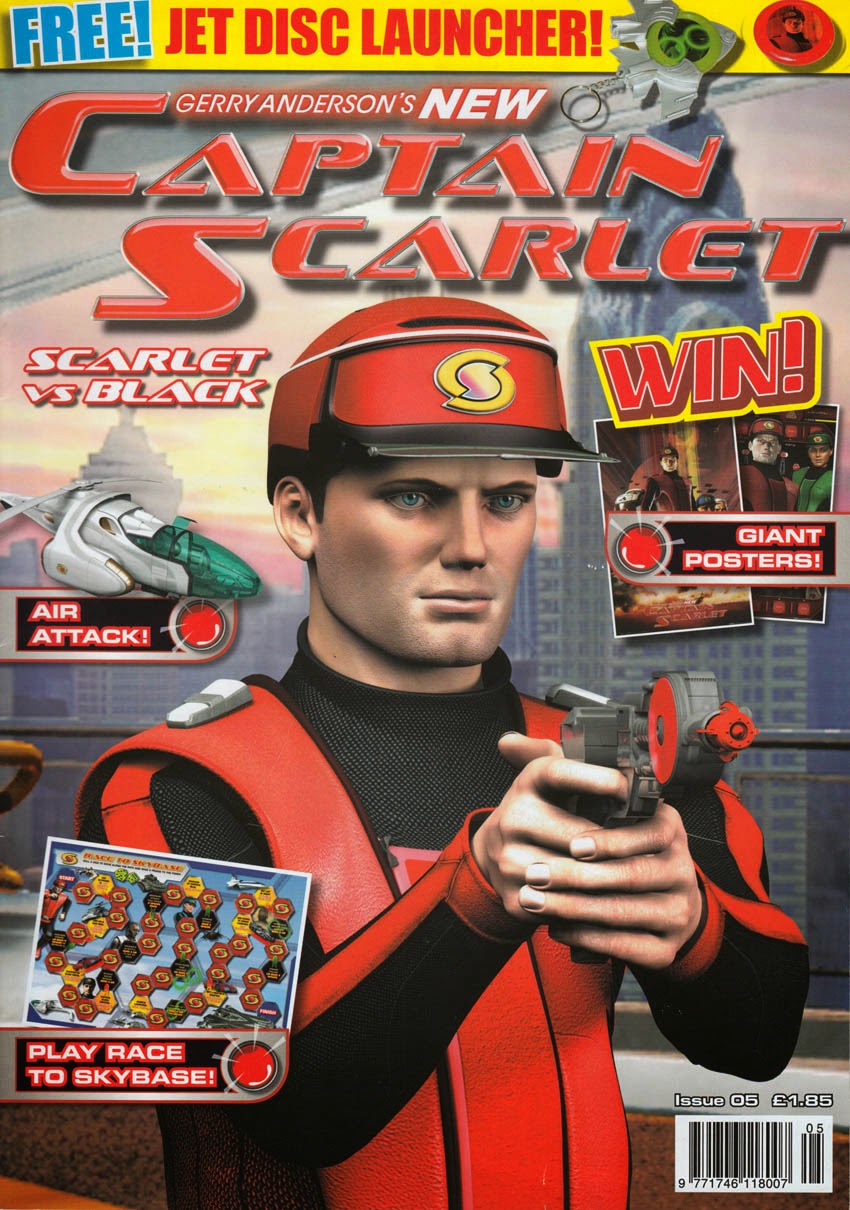 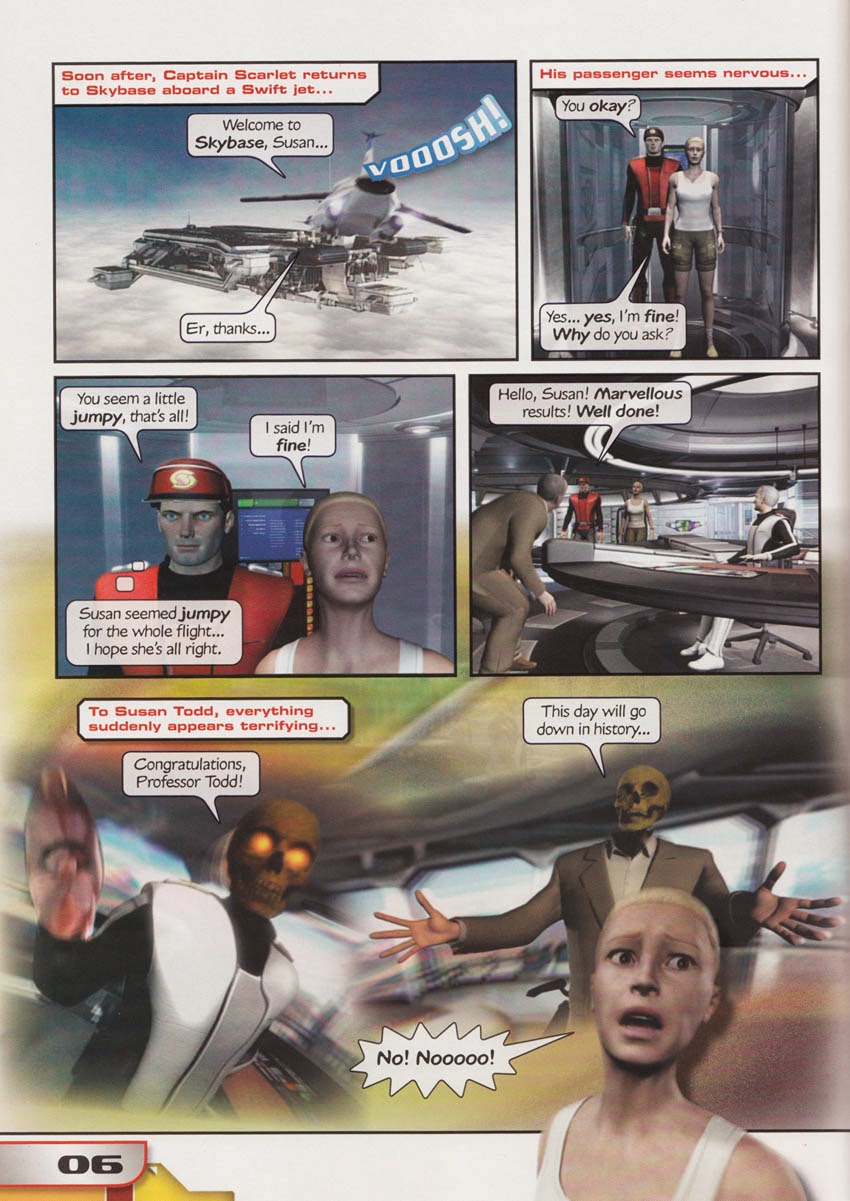 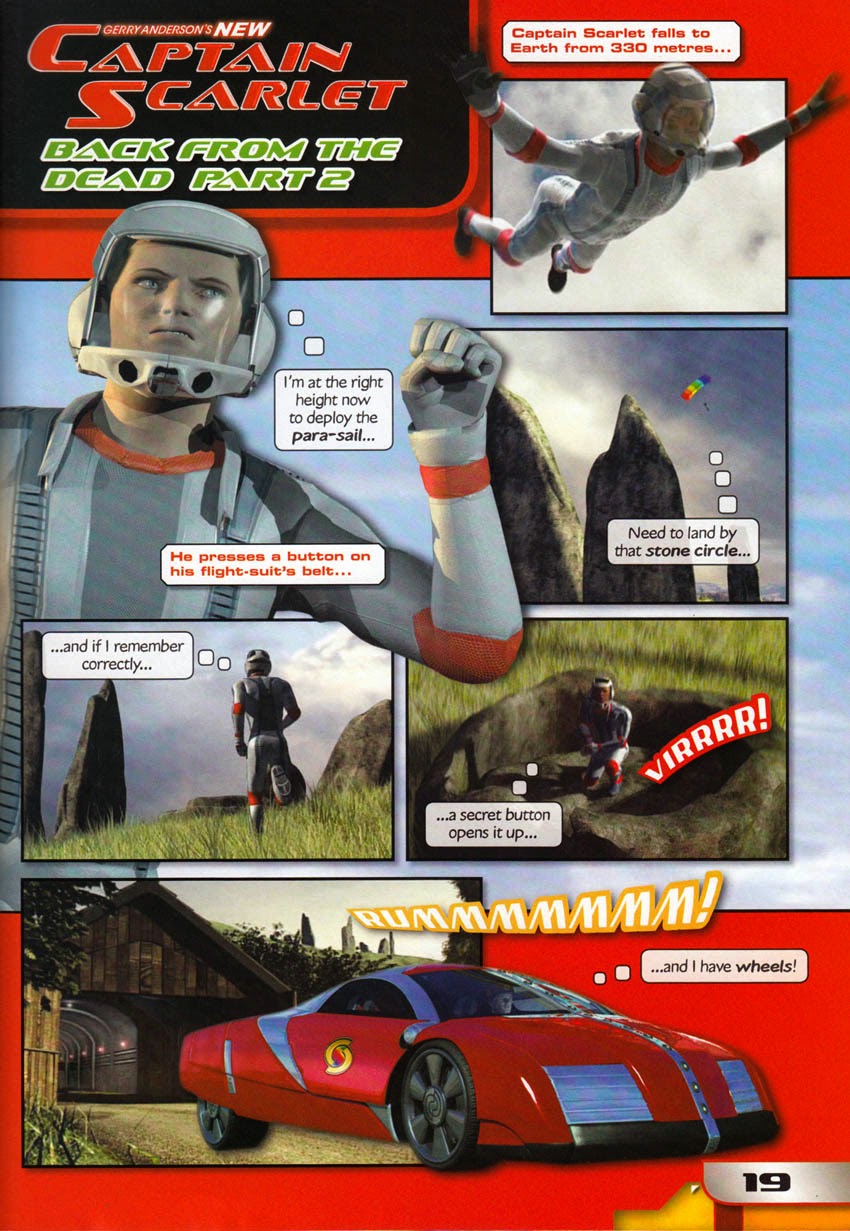 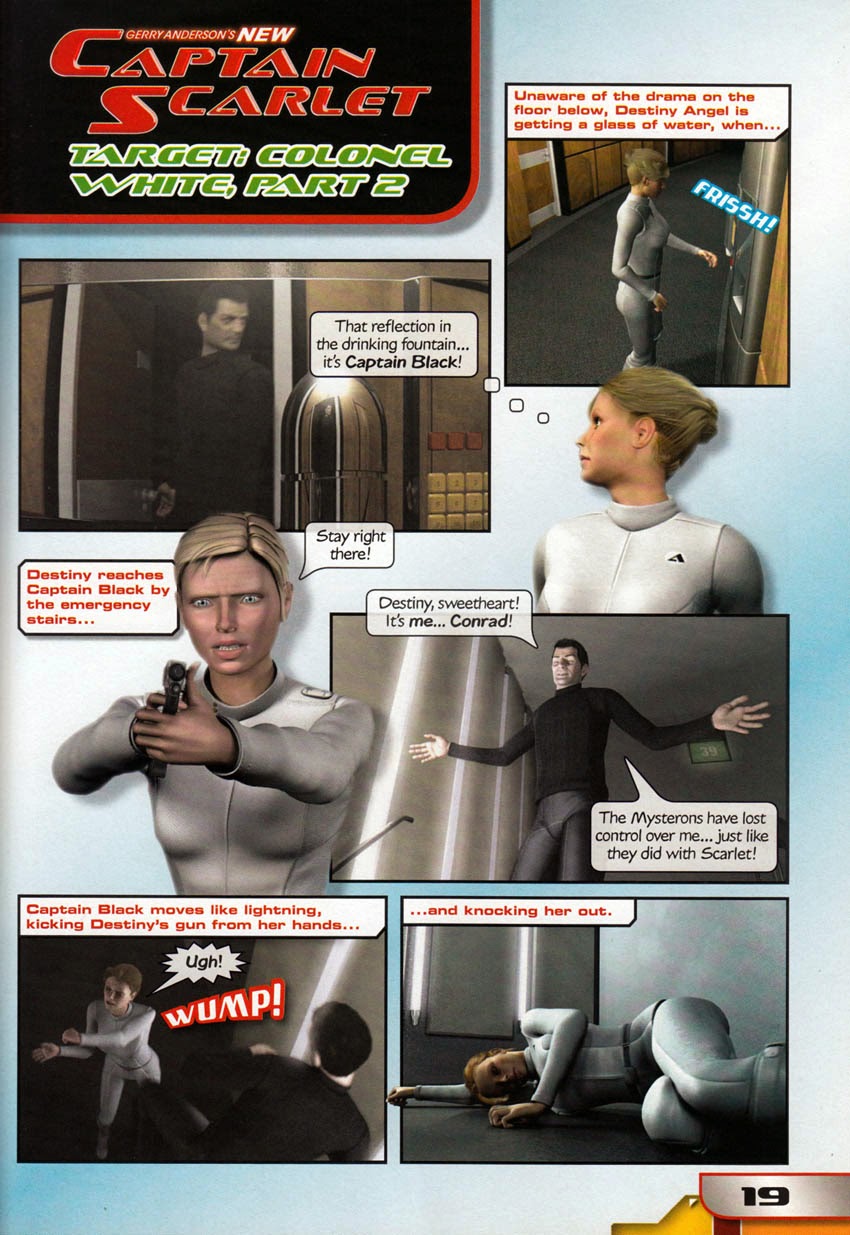 The rest of the 28 page issues were taken up with pin ups, character profiles, vehicle data, puzzles and suchlike. The designer of the magazine, Tom Moore, did a very good job with it. 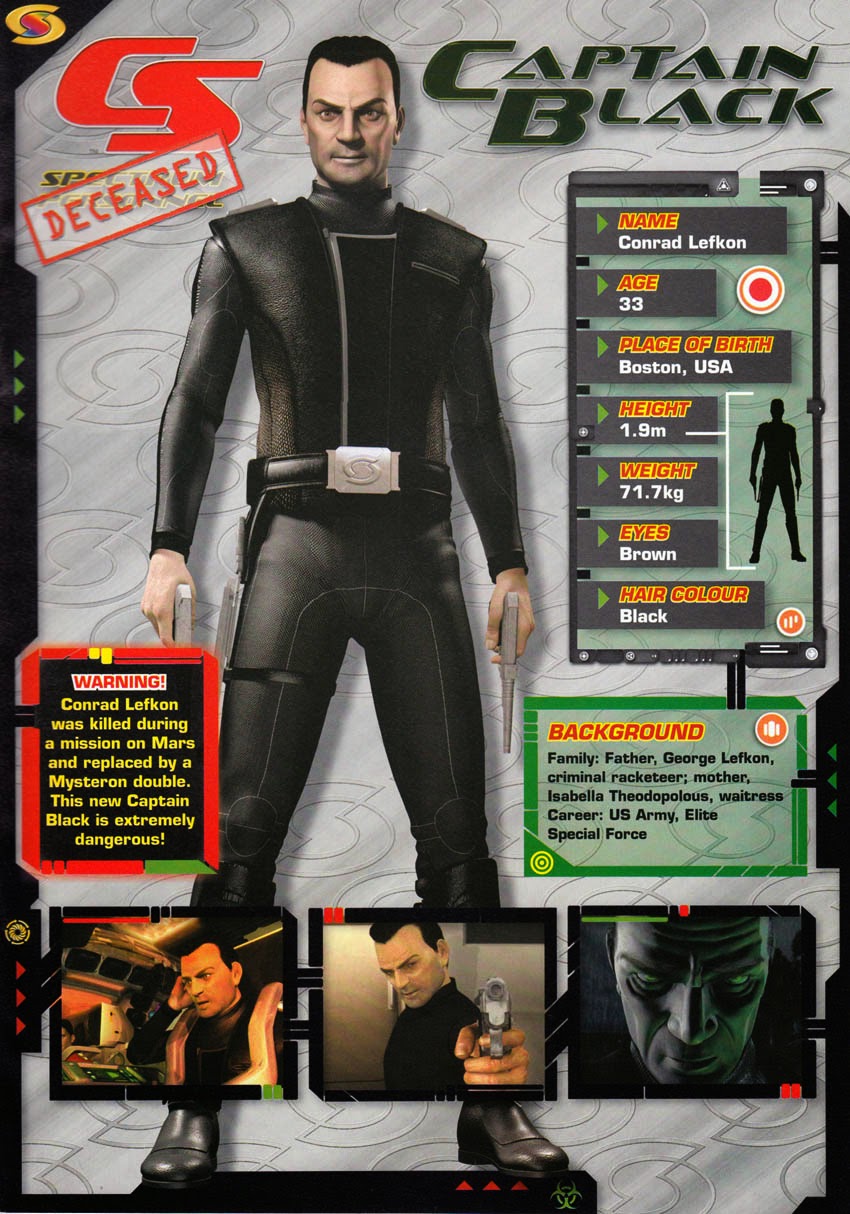 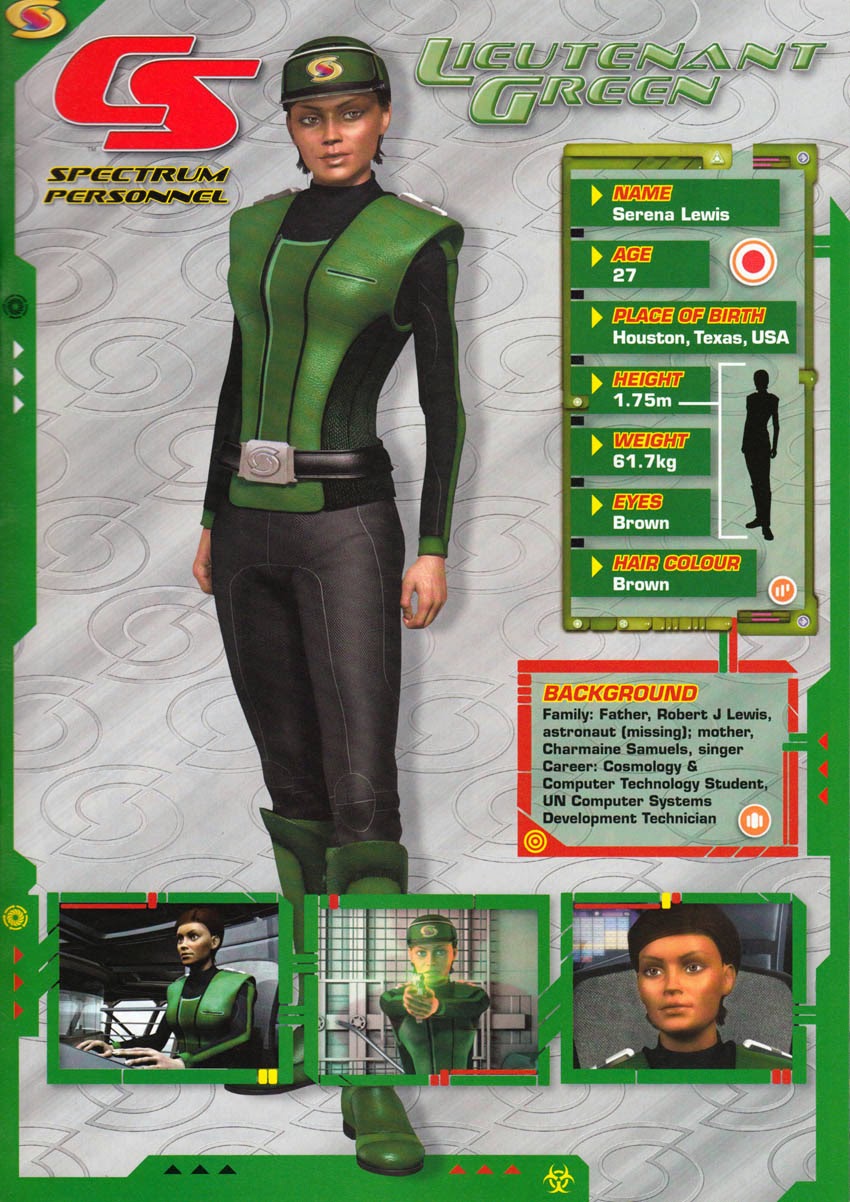 Sadly issue 6 was the final issue and it ended with quite a downbeat message telling the readers that the Mysterons had won! 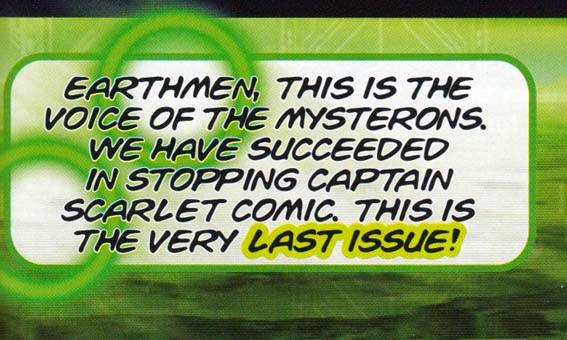 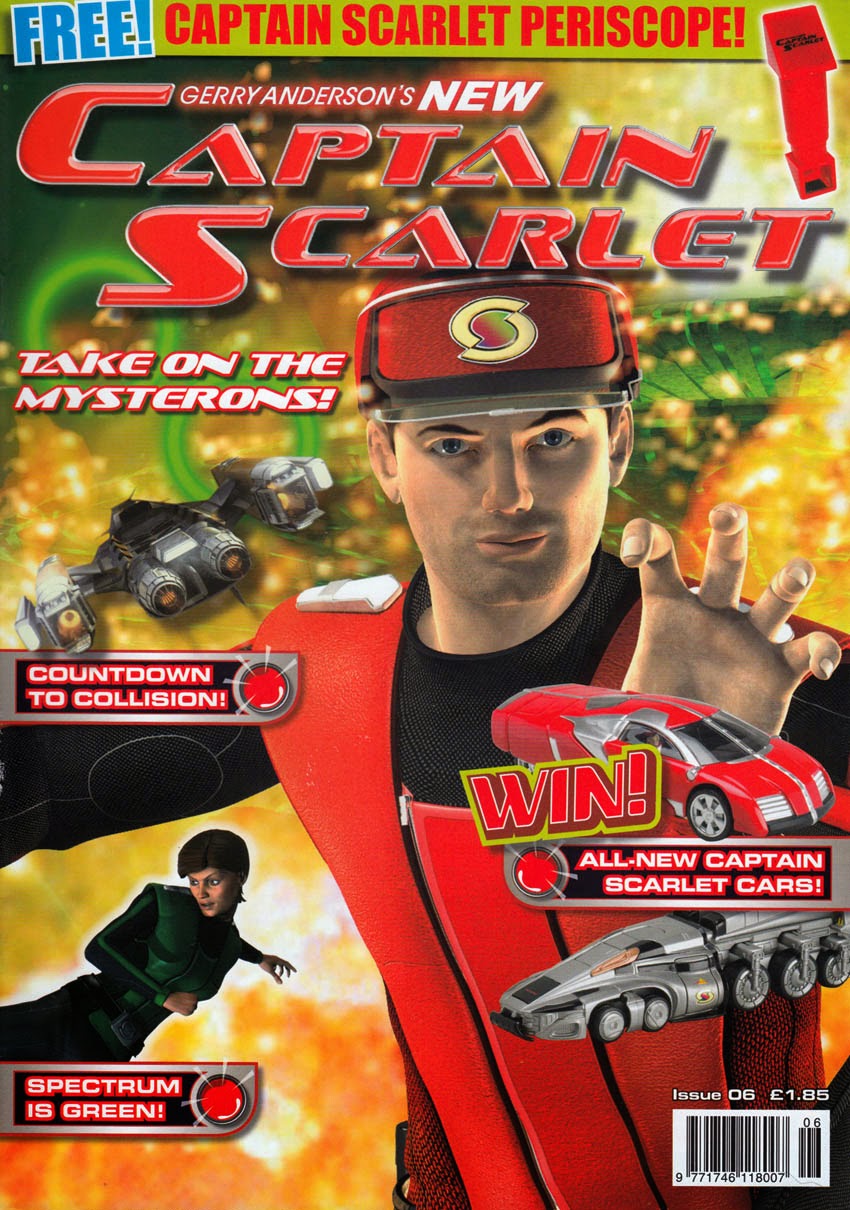 As licensed titles go, New Captain Scarlet was one of the better ones of this century so far. While I appreciate that the budget couldn't cover originated comic strips I'd have preferred it if the photo-strips had used screen grabs from different episodes to create new stories (as I'd done with Egmont's CiTV Tellytots mag a few years earlier). Still, Will and his team did a fine job on the mag and the six issues are a nice collectors item for any enthusiast of Gerry Anderson memorabilia.

By the way, Gerry Anderson's New Captain Scarlet is still available on DVD. Well worth buying if you haven't seen it.
Posted by Lew Stringer at 13:19

CS was my favourite GA creation, so when I heard about this comic, I wanted it. But, I looked for it and could never find it. Now you've shown me some of the pages, I want them even more! ( Bet you can guess my next destination? )

Now I think about it I don't think distribution was that good. I was fortunate that my corner shop stocked it but I didn't see it everywhere.

Being a CS fan as a kid I really enjoyed the TV series as you say it was very good with some nice story lines but I also never saw the comic (although I doubt I would have picked it up without some traditional comic illos or better yet reprints from the Bellamy era etc) but it looked a good attempt from what I ve seen here lets hope any new Thuderbirds comic fares better.

Have ITV not learned from the mistakes they made with New Captain Scarlet? After the premiere (which is well publicised, kudos to them for that at least), the remaining episodes of Thunderbirds Are Go are at 8am. And printed TV listings magazines tend to list Saturday morning ITV as simply "6.00 CITV, 9.25 The Jeremy Kyle Show". If those same mags don't list CITV, and the viewer (or parent) is a technophile who doesn't like EPGs, they won't find it.

And launching the New Captain Scarlet magazine in October 2005 when the show aired in February? Let's hope DC Thomson have a speedier launch with their Thunderbirds Are Go title, though personally I think it should have been this week or next, to coincide with the show launching, yet it clearly isn't or I would've surely seen more than just the press release about them getting the license.

I agree James, although I hear it will be repeated mid-week around 5pm. (If that's true.)

No sign of the magazine anytime soon I'm afraid but the show is set for three series so there's time yet. Remember Doctor Who Adventures didn't launch until Tennant became The Doctor and that sold well.

HAPPY EASTER, LEW!
No luck with these 6 on EBay yet, but I still have plenty of places to look.

Do GE Magazines still have the Captain Scarlet license or has it gone to someone else? I had a notion of pitching a Spectrum Angels mini-series, but I need to know who to pitch it to. I'd like it to be a proper comic though, like the Doctor Who stuff Titan are putting out.

I shouldn't think GE have the license after all this time, Oscar. It's been 12 years. There's no Captain Scarlet strips at the moment so I suppose the license is up for bidding from ITV.

So I thought. I might throw something Titan's way, since they're only doing licensed properties right now. It doesn't seem right that something as good and fondly remembered as Captain Scarlet hasn't been picked up by someone.

Anything's worth trying. Send them a synopsis along with a CV and samples of previously published works etc.