The House of Hammer! 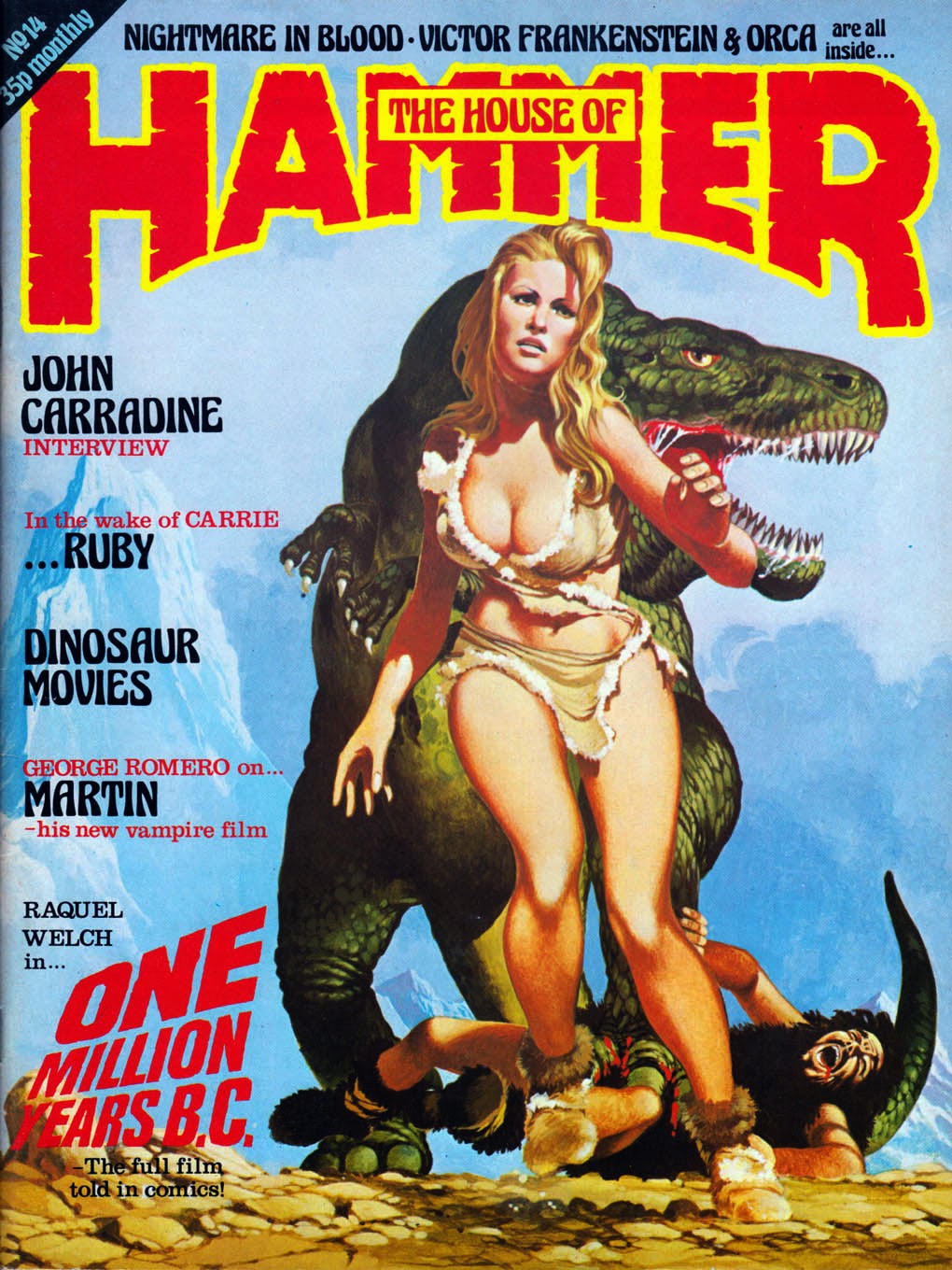 There aren't many comics I regret getting rid of during the times I've pared my collection down over the years but I do sometimes wish I'd held onto the full set of The House of Hammer that I'd bought on publication.

For the benefit of those of you unfamiliar with this title it was a British rival to the imported American mags such as Creepy and Famous Monsters and, in many people's opinion, was actually better than those magazines. Published by Top Sellers and edited by Dez Skinn, The House of Hammer (or Halls of Horror as it was later retitled) featured comic strip adaptations of classic Hammer films illustrated by top UK artists such as Brian Lewis, John Bolton, and Paul Neary, alongside a bevy of movie articles and reviews by people such as John Brosnan, Tony Crawley and Denis Gifford.

I recently bought a 1978 edition of The House of Hammer No.14 direct from Dez. Let's have a quick look at the contents.

The cover by Brian Lewis (above) was one of the most striking to grace the magazine. A wise choice by editor Dez because Raquel Welch was the first screen crush of many a young lad, myself included. Brian Lewis was an outstanding artist, able to turn his hand to both realistic paintings and cartoon humour work. (He drew many of the Charlie's Choice strips for Smash! in the sixties.) Sadly, Mr.Lewis passed away later that year, far too young at 49.

As announced on the cover, the strip adaptation for this issue was One Million Years B.C., Hammer's daft but fun 1966 movie of dinosaurs living in the same era as cavepeople with perfect teeth. Writer Steve Moore provided the comic's script and John Bolton illustrated it. 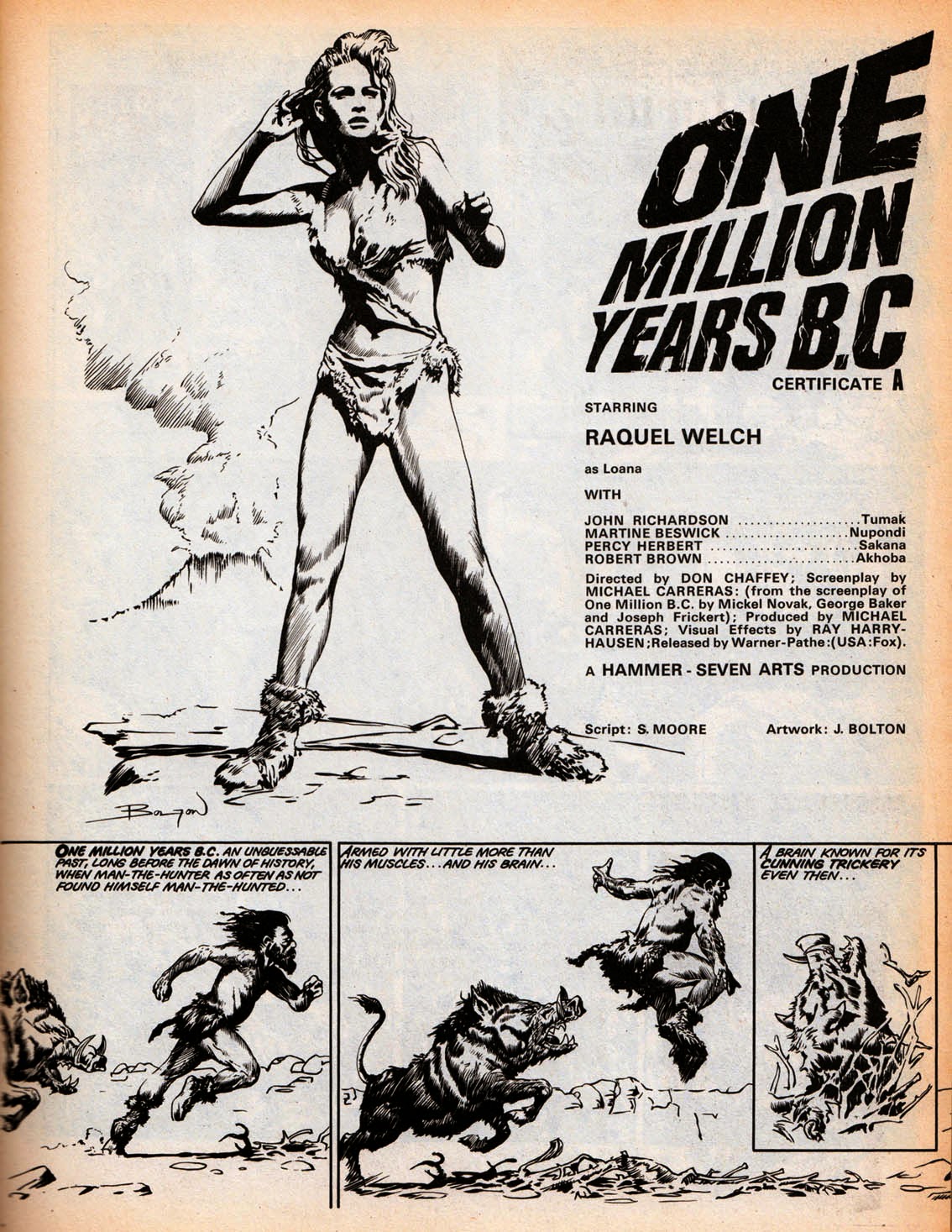 They did a fine job too. This was a case of the comic strip adaptation being superior to the movie script. The film was without dialogue, apart from primeval grunts and snarls, so Steve Moore had a bit of a challenge to make the story interesting for print. A challenge he rose to admirably by creating a descriptive narrative for each panel. 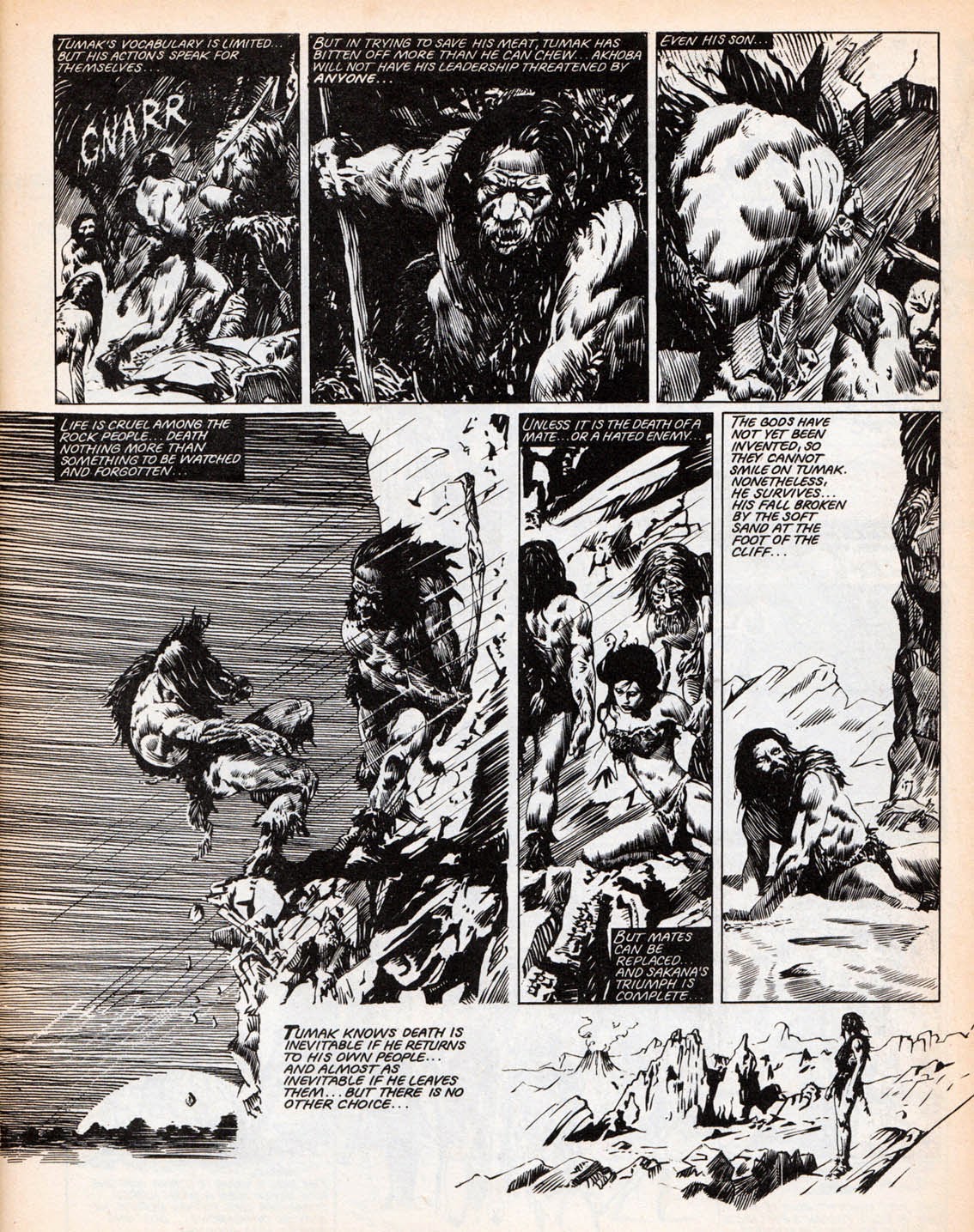 John Bolton also went above and beyond the call of duty to turn in some wonderfully detailed artwork. This was in the early days of John's career and the influence of Frank Frazetta's work was evident in several panels but Bolton's own illustrative skills definitely shone through. 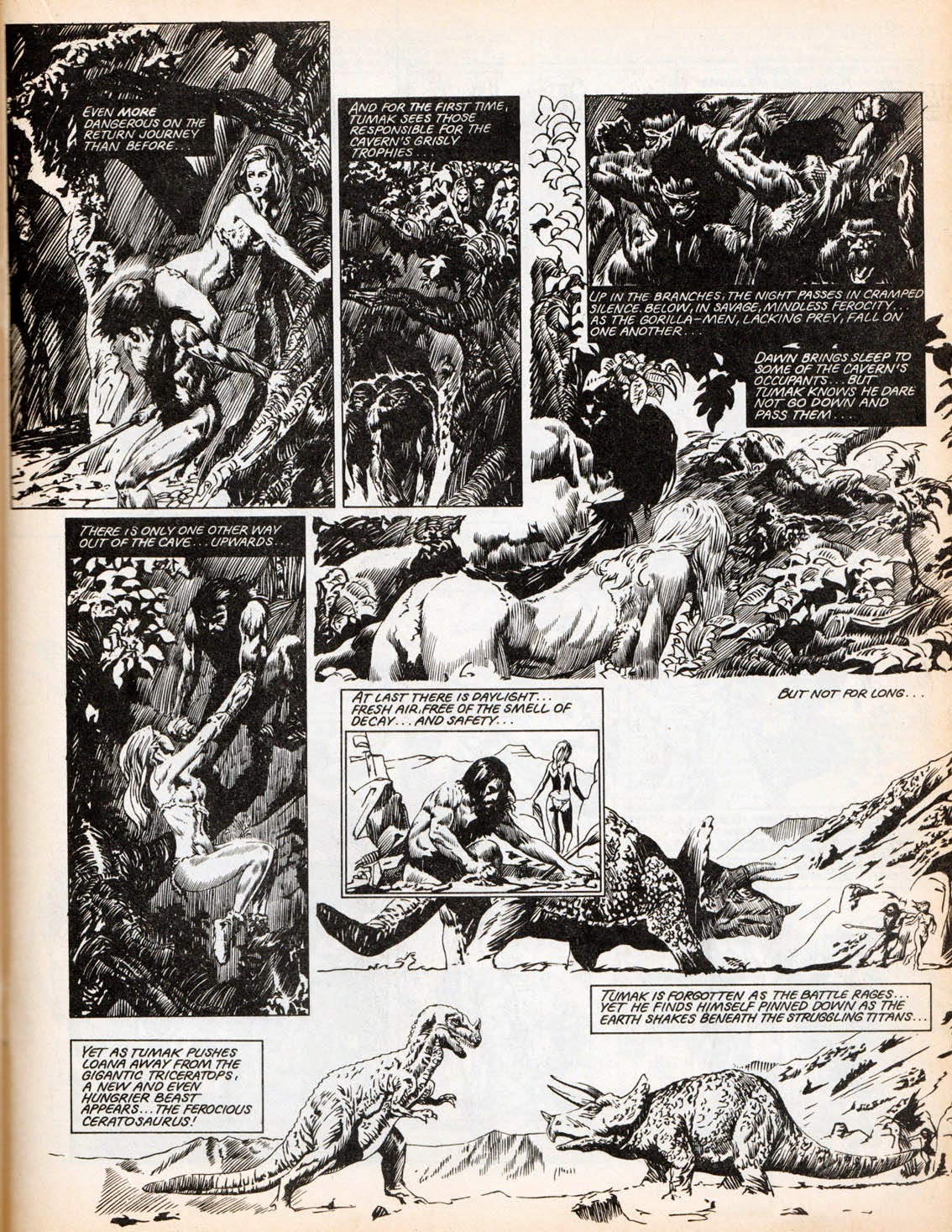 It can't have been that easy to adapt a 90 minute film into 15 pages but Moore and Bolton managed it and the strip runs at a good pace. It also managed to out-cheesecake the movie, which was no mean feat. As this was the 1970s, and comics were keen to be 'adult', a bit of nudity in the form of a 'nip-slip' was included, which certainly wasn't in the film. Quite daring for a British newsstand comic at the time. 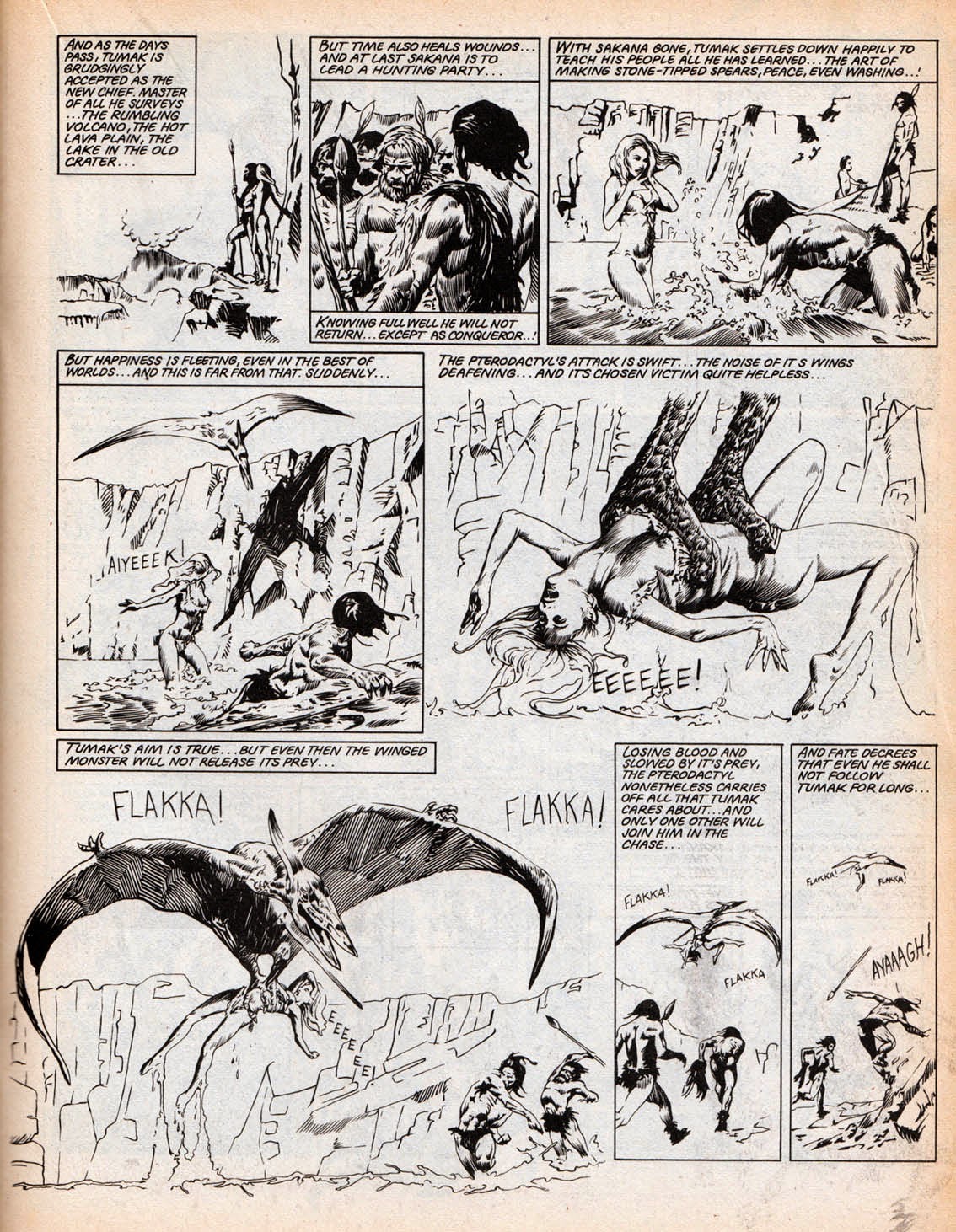 The rest of the 52 page mag was taken up with various articles, reviews and suchlike on movie subjects as varied as George A. Romero talking about his new movie Martin, an interview with veteran actor John Carradine, and a look back at 'Lost World' movies of the past.

For many of us back then, House of Hammer had the ideal mixture of comics and features all in one magazine. It was an excellent production by Dez Skinn and his team. Bear in mind that HoH was published before 2000AD and Warrior so it was quite groundbreaking (although Kevin O'Neill's Legend Horror Classics had beaten it to newsagents shelves by a year). 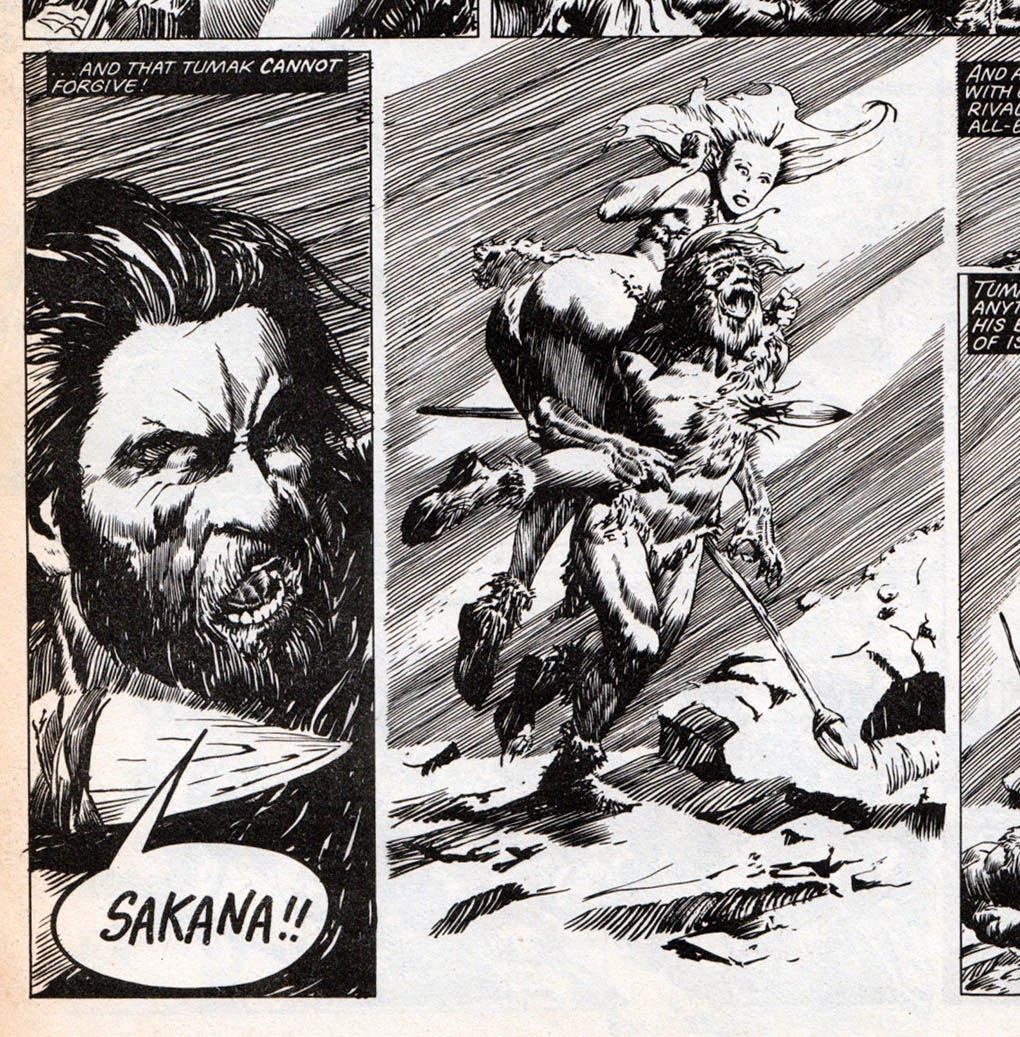 If you want to read more about the history and background of House of Hammer you can't do better than reading the words of the man himself Dez Skinn. Take a look at his fascinating website here:
http://dezskinn.com/warner-williams-2/
Posted by Lew Stringer at 00:49

Great memories! I had a full collection as well. There is a neat potted history of the magazine over on the page horrorpedia.com which your readers may find of interest.

Lew, I would buy a collection of this material in a heartbeat! I have never even heard of this. Thanks for showing us colonists what we missed.

You're right about HO. It was a good effort.I got my copies in the post because most things i wanted weren't easy to come by in my neck of the woods by that time .I didn't get them all but I've still got several copies buried away somewhere. I think I still have this one.That panel beside "SAKANA" is absolutely a Frazetta rip-off but then again why wouldn't he steal from one of the best. it's how everyone learns anyway. Wally Wood had this motto on his studio wall...“Never draw anything you can copy, never copy anything you can trace, never trace anything you can cut out and paste up.”..He also reduced his workload by inventing his sort of shorthand ..."22 panels that always work " ..which reminded him to try and cut down on his mad workload. I dare say Frank Frazetta had his own early influences too.

Kris, the later issues (titled Halls of Horror) had American distribution but I guess supplies would have been limited. It's worth looking out for copies. Dez's website gives a great overview of each issue so you can see which issues might appeal to you more. Dez sells spare copies he has on eBay UK if that helps.

Paddykool, I have a stat of Wally Wood's 22 panels. It doesn't always work for some of the humour comics I do but it's still a good guide.

You're not the only one to regret something like that.It didn't get to my neck of the woods till Warrior came out, by then it was Halls Of Horror. I did then get all of those, including the Dracula special. But, in MY last clear out in '96, I sold them all together with 2 complete sets of Warrior/MM special!

Regretfully I sold my Warriors too John, but I bought most of them again from Dez a few years ago. (I still haven't gotten around to re-reading them though!)

That issue (the first I worked on) had my favourite sound effect of all time - "Flakka Flakka!". I also thought the dinosaur behind Raquel on the cover was doing a pretty good Tommy Cooper impression ...

Ha! Very true, Alan. Good to hear from you.

I'm lucky I still have the complete set with the original release binder anyone interested?