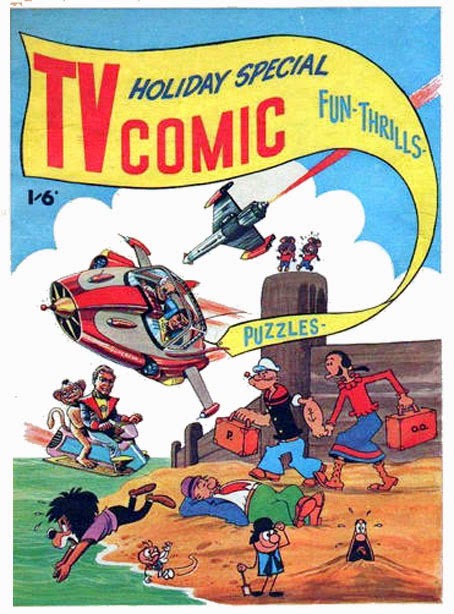 Firstly, my apologies for the poor quality of the cover image above. My second-hand copy of this special is unfortunately coverless so I've used an image from the GCD website which is the best I could find, albeit low resolution. However the rest of the scans are all from my edition. (Click on images to see them much larger.)

The TV Comic Holiday Special 1963 was the second in the series. It had 48 packed pages sized 300mm x 230mm featuring strips and text stories based on tv stars of the day.

The versatile Bill Titcombe was the artist on a two page Bootsie and Snudge strip. Titcombe would be a regular contributor to the TV Comic weekly over the following years on strips such as Ken Dodd's Diddymen and Tom and Jerry. 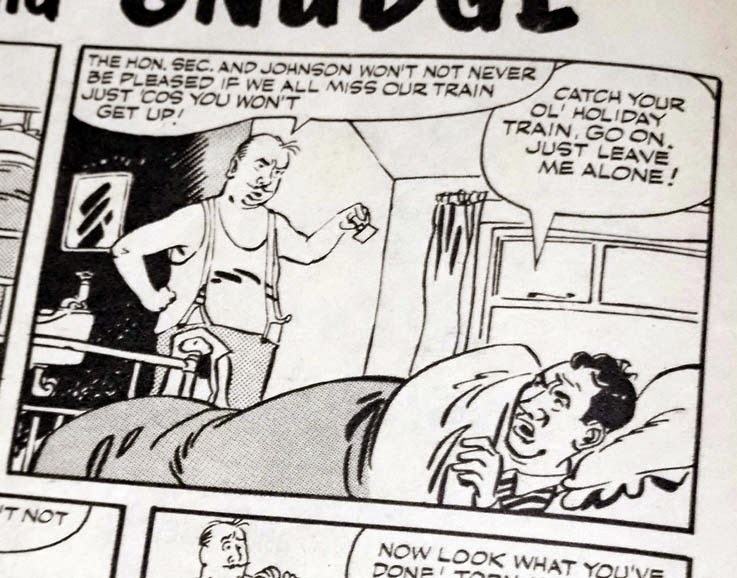 A Supercar text story ran across two pages, illustrated with stills from the show. 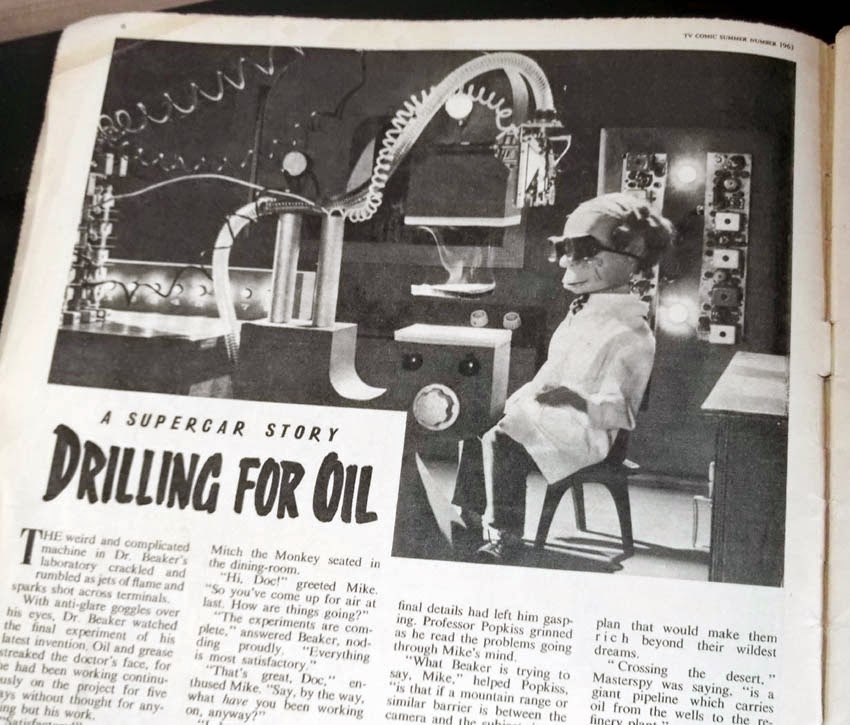 One of TV Comic's longest running humour strips was Popeye, featuring brand new stories for the UK market. Various artists worked on the strip over the years. In this instance, Chick Henderson, whose style I really like... 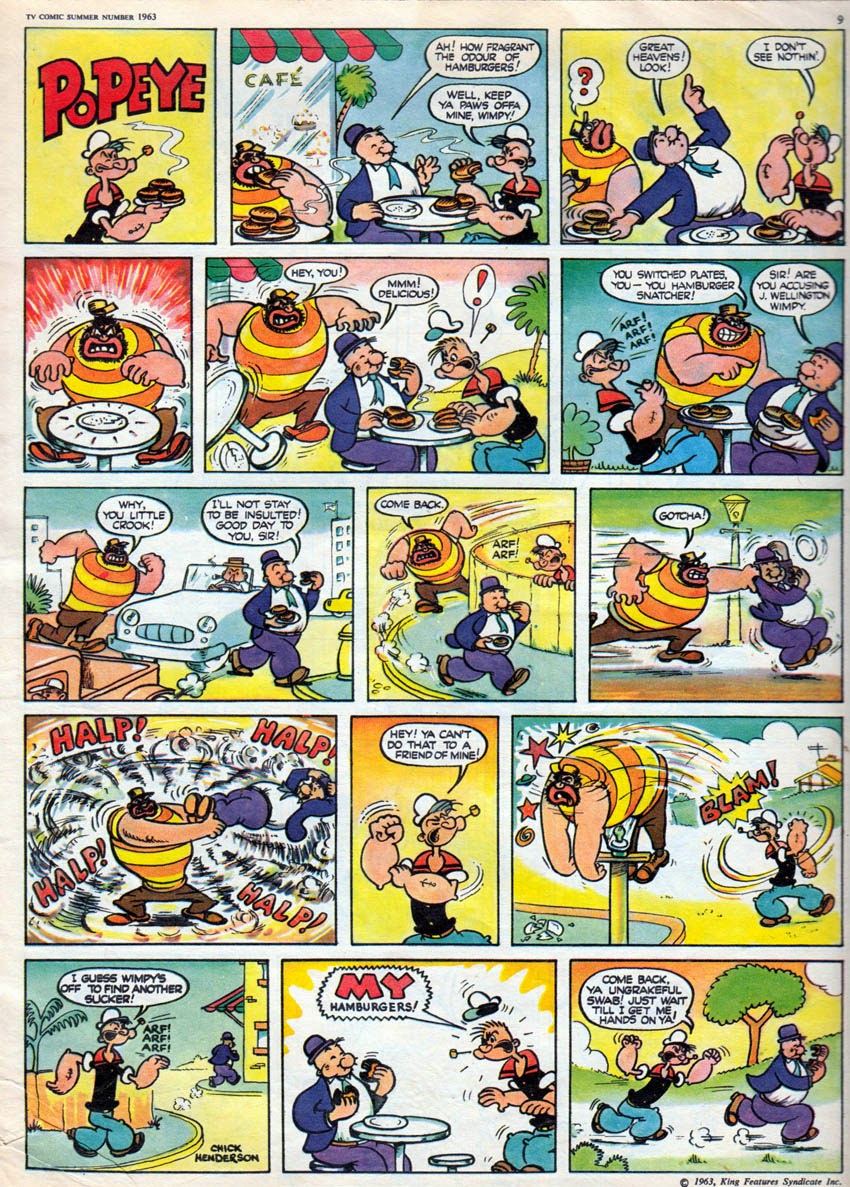 Foo Foo was a cartoon that rarely seemed to be on TV in my area, but perhaps it was shown when I was too young to notice. 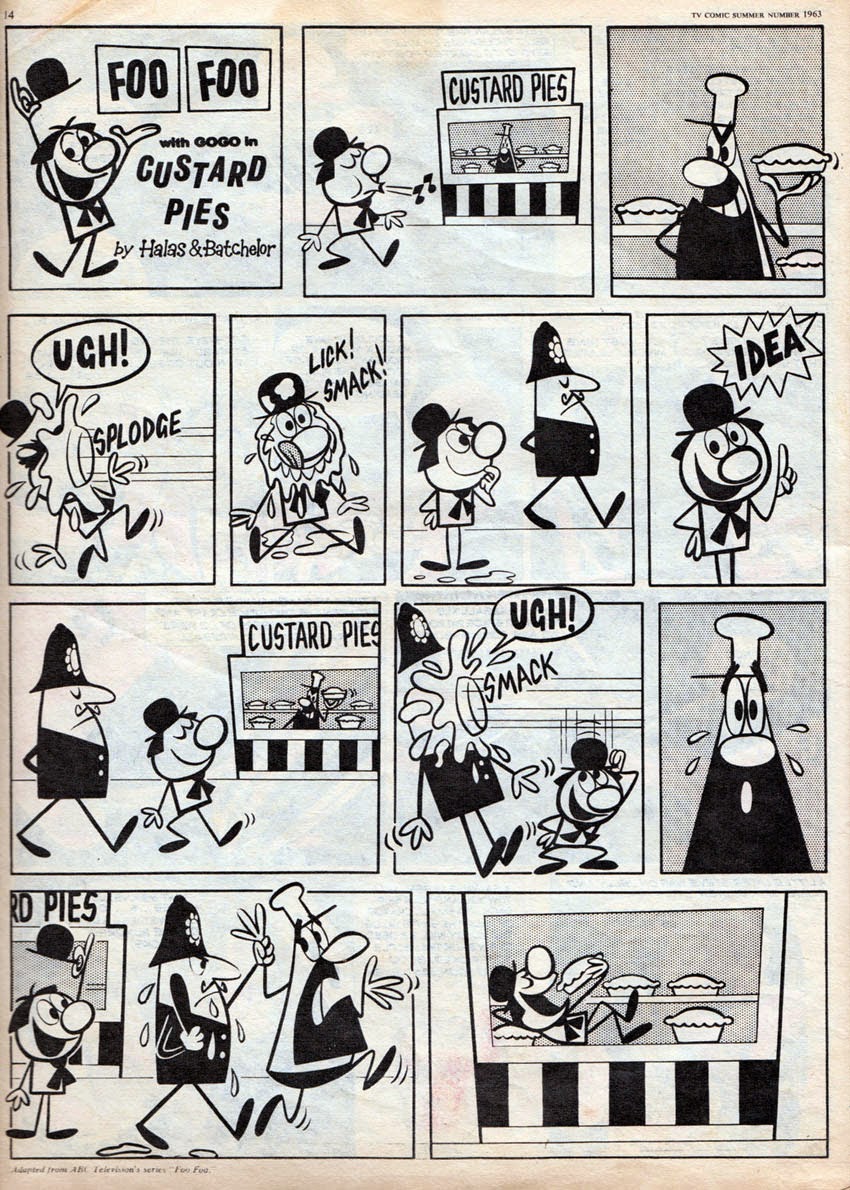 Lenny the Lion was a rather camp puppet used by ventriloquist Terry Hall. The strip bares little relation to the stage act (and no Terry) but it's nicely drawn by Bill Mevin... 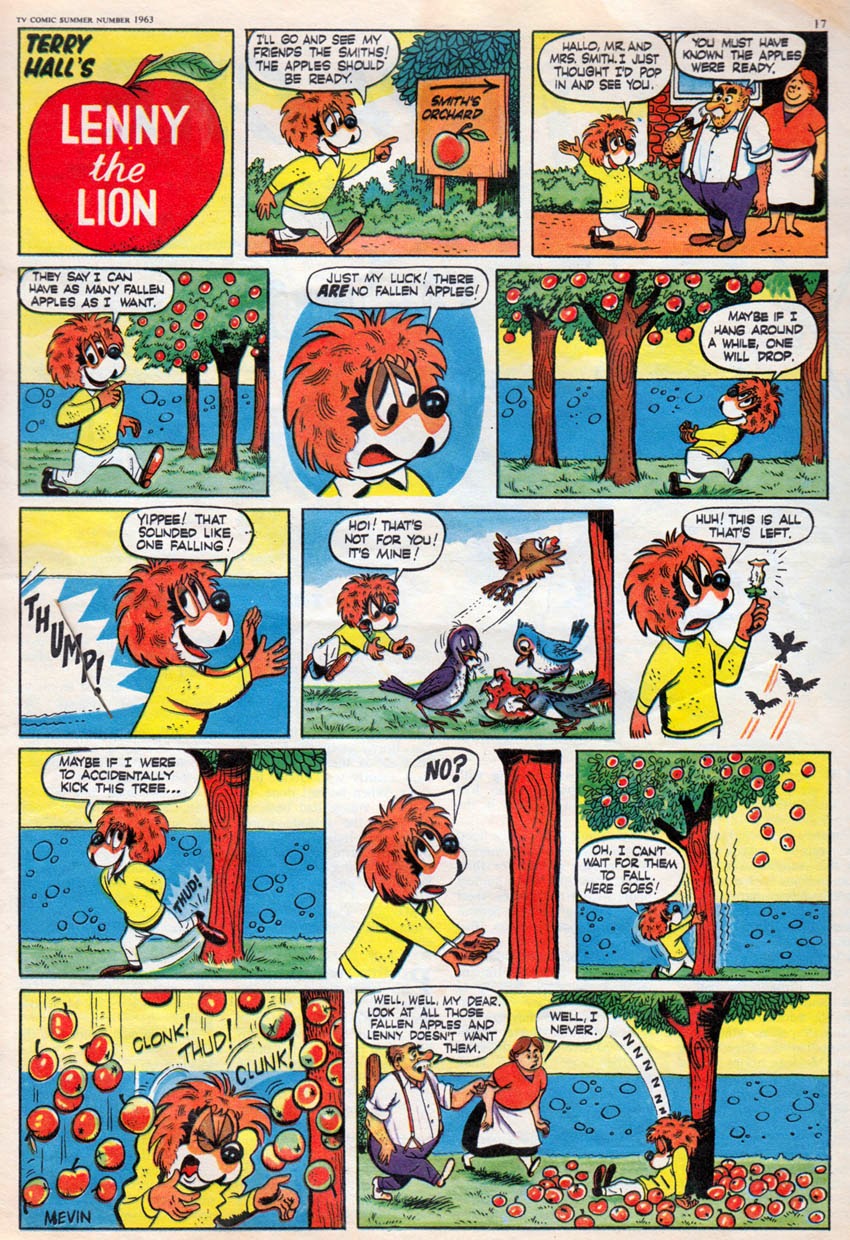 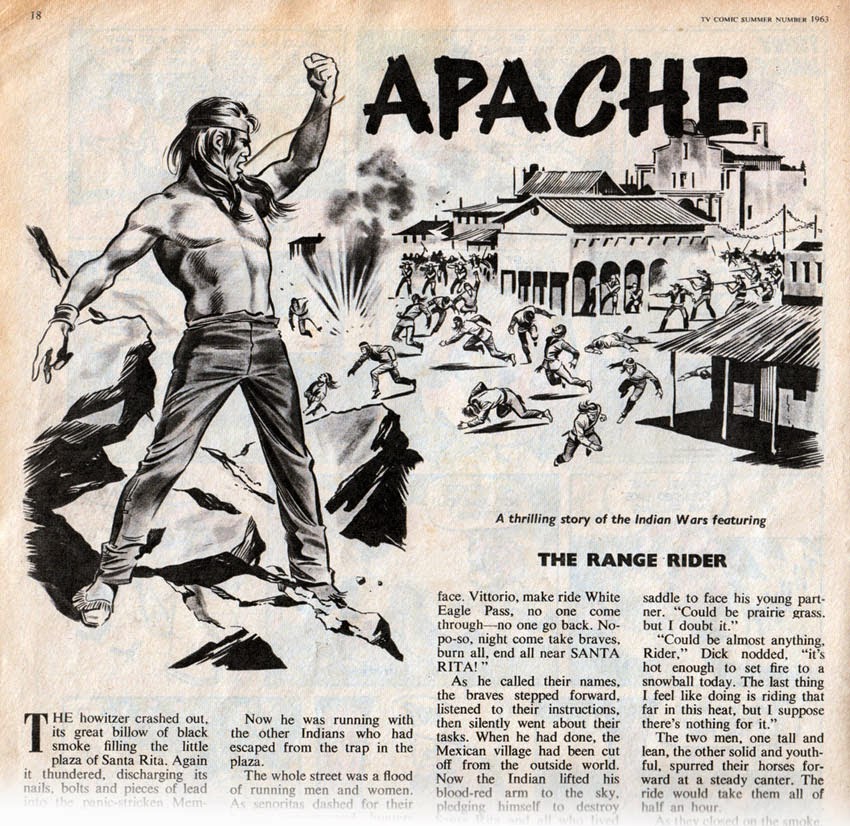 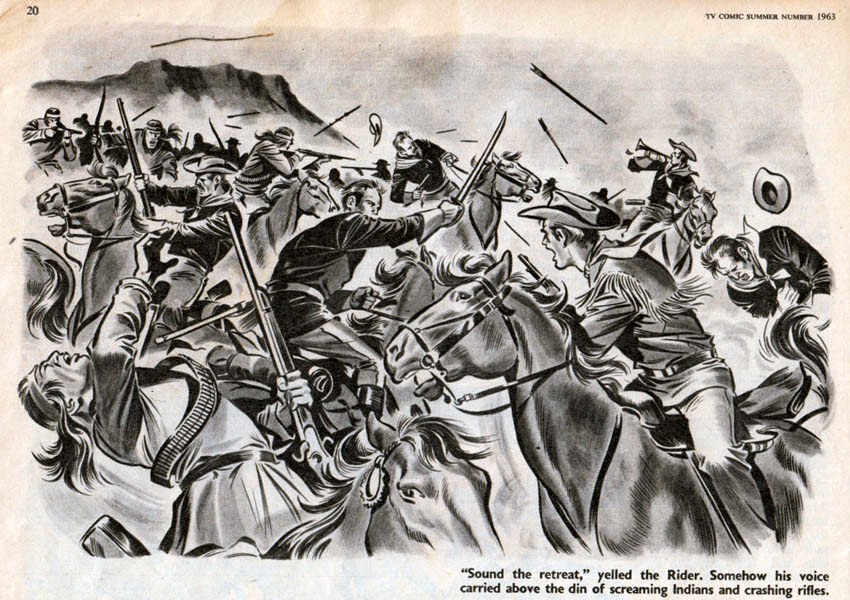 The centre-spread featured a full colour Supercar strip by Bill Mevin based on Gerry Anderson's early puppet series. Interesting that the TV Comic version is so dramatic, but when the strip moved to TV21 in 1965 it was treated as light relief. 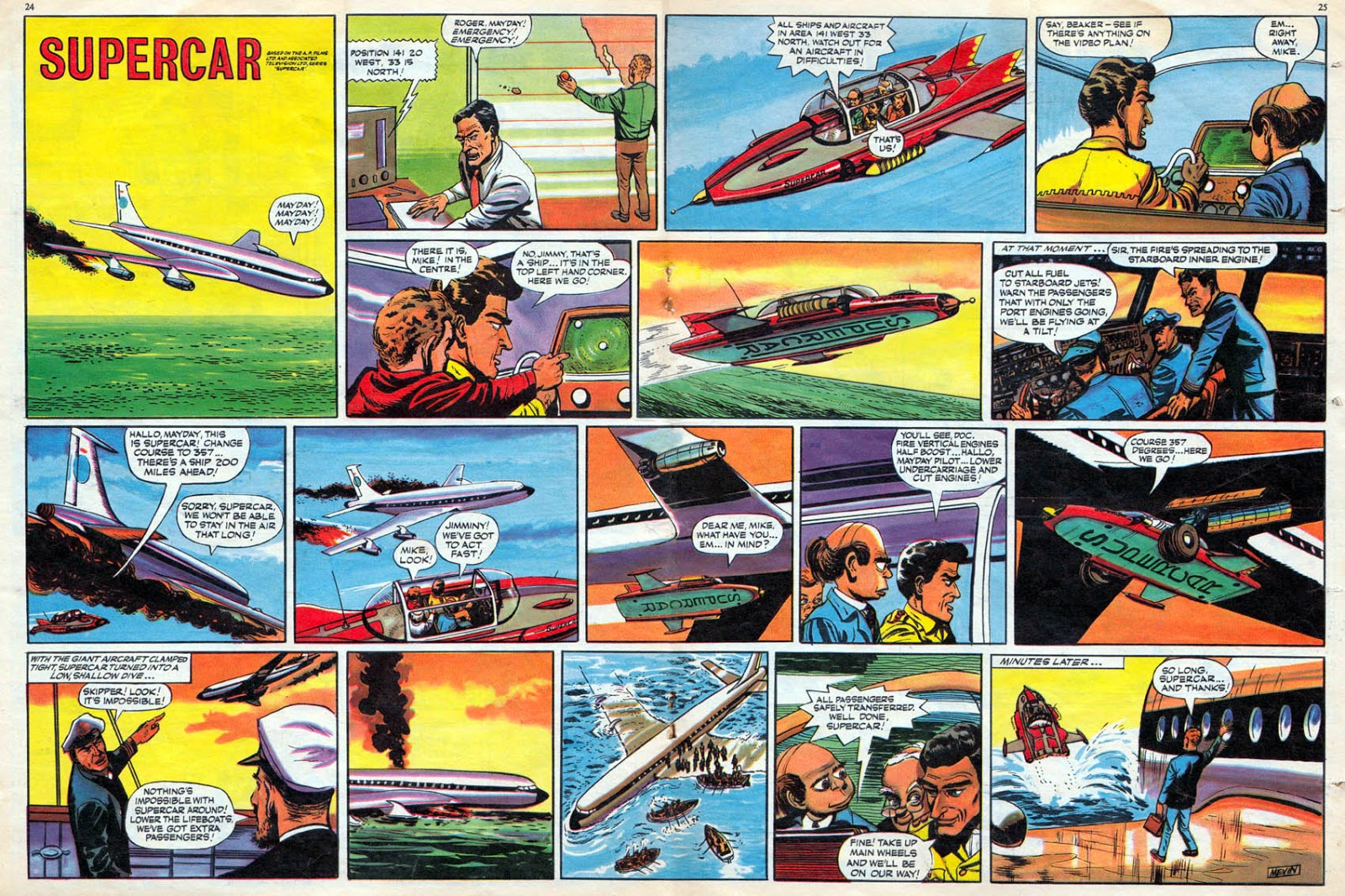 One of the original, non-TV based strips in the special was Super Nan, who seems to be TV Comic's version of The Beano's Pansy Potter. Art looks like the work of Dick Millington. 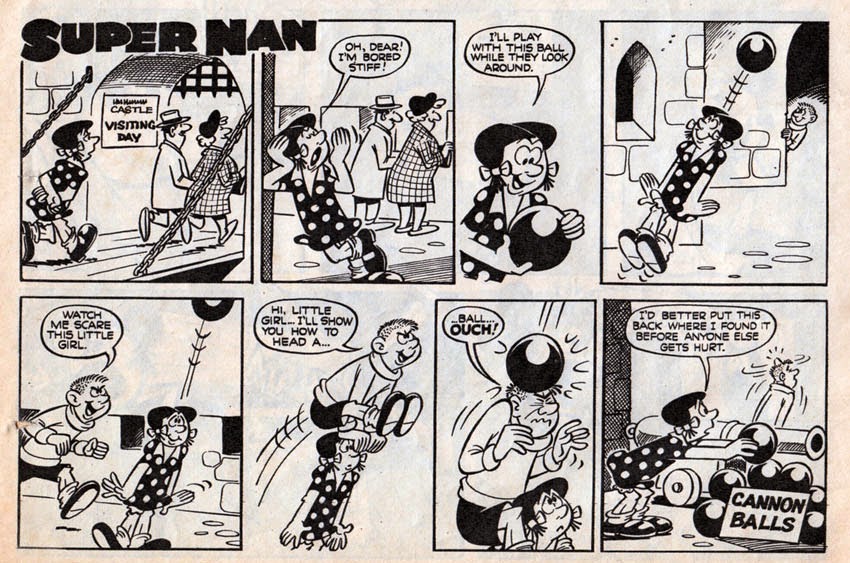 There were two Fireball XL5 strips in the special. Here's one of them. Artwork by Neville Main... 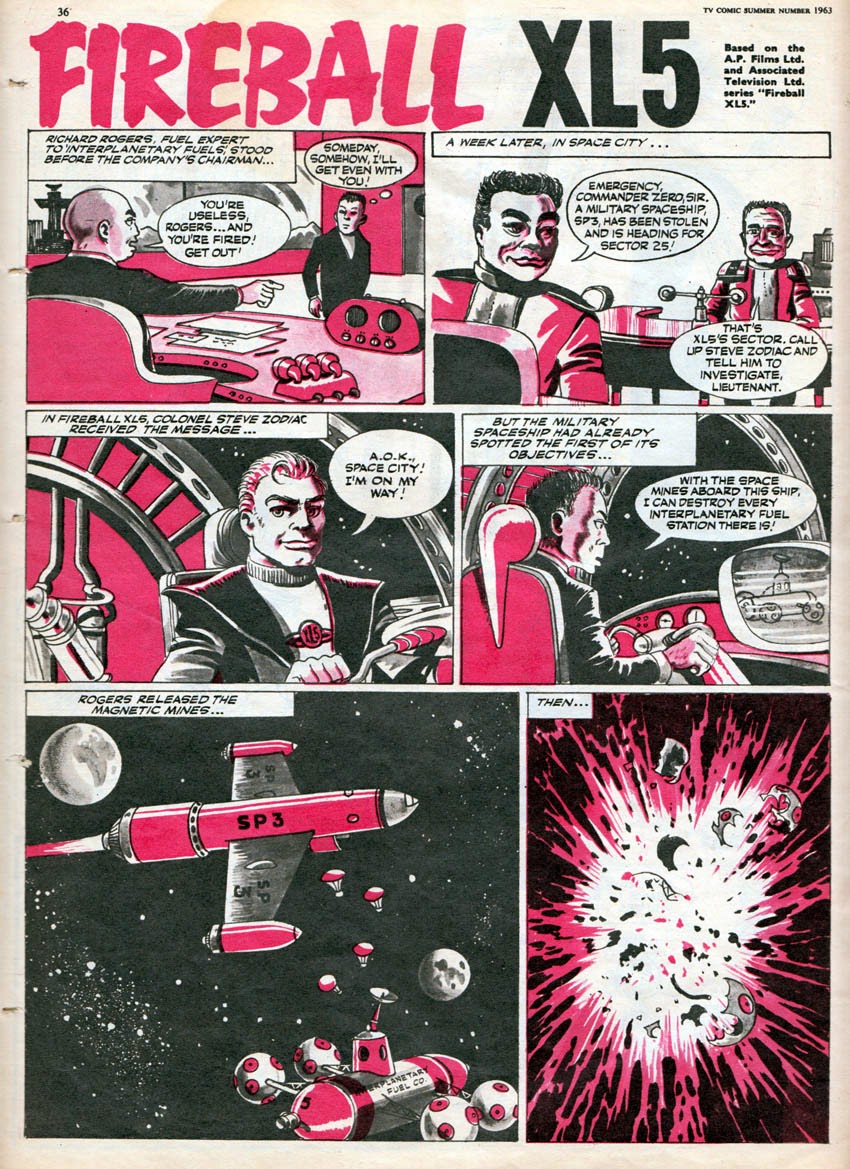 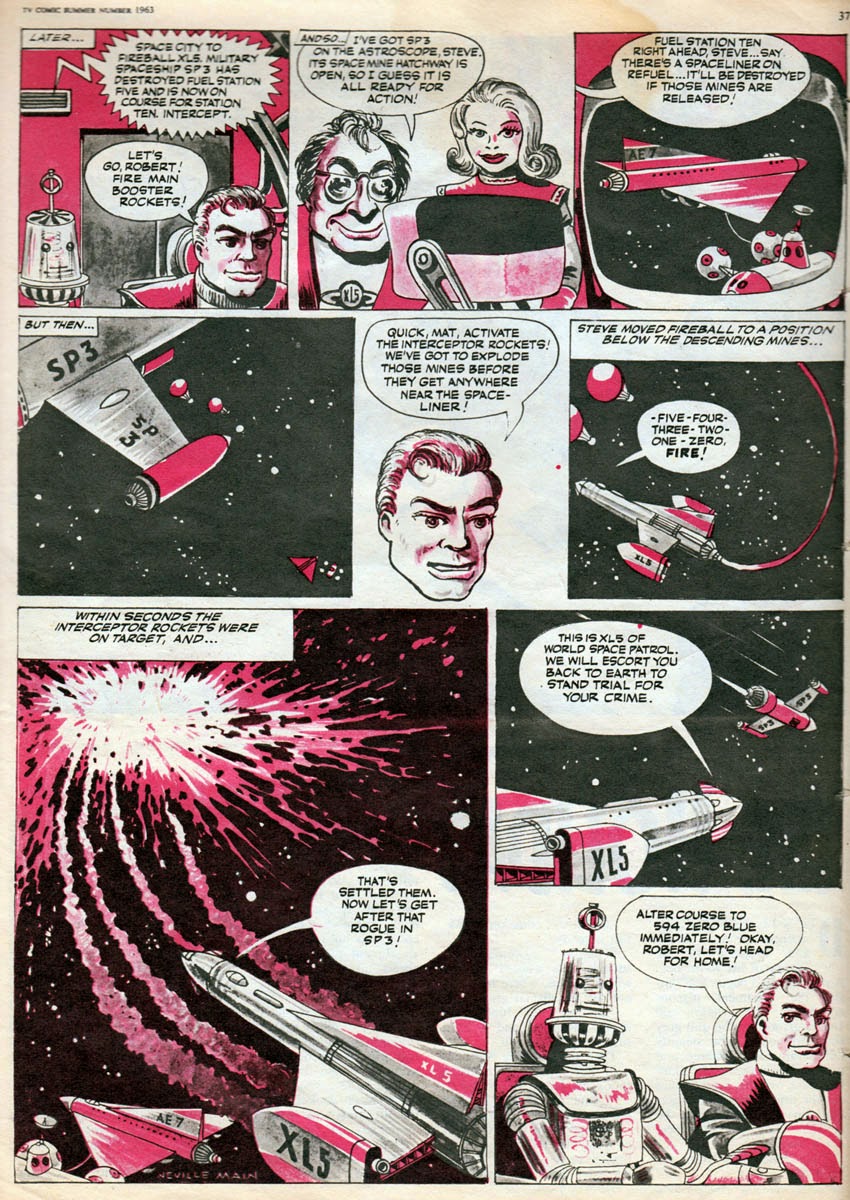 Dickie Henderson was a very popular entertainer at the time and had his own comedy show featuring a fictitious family. TV Comic saw The Dickie Henderson Family as ideal strip material, although in the Holiday Special they decided to run it as a text story illustrated with scenes from the show. 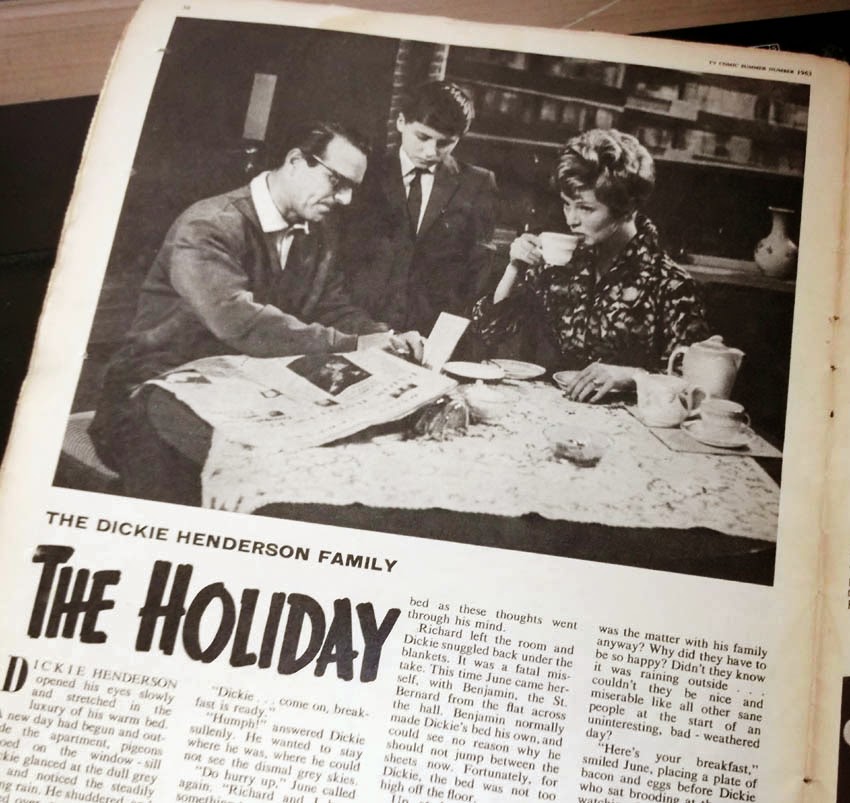 The rest of the TV Comic Holiday Special 1963 featured non-TV strips such as Mighty Moth, The Bakers' Dozen, Lochy the Funny Wee Monster, plus second helpings of Foo-Foo, Popeye, and others, along with a few puzzles and games. All in all a decent publication that I'm sure must have been a good holiday treat for many readers.
Posted by Lew Stringer at 18:24

Ah Foo Foo.. by the famous Halas & Batchelor studio.. They made the first British animated feature, in 1945, and in 1959, created Foo Foo. the First British cartoon to be broadcast in America. This lead, of course, to Dodo, the Kid from Outer Space, which was a lot more popular but made to be a lot more American in style and design.

And I found that most of the time, no comic writers knew what to do with Host-puppet teams. the Puppet was more liked by kids, so they always focuses (well, almost always) on the puppet and lead to stories quite far removed from the popular shows. This runs to TV really.. in the late 90s, they tried to do a Sooty Cartoon.. removing too much of the format, so everyone but sooty had to talk English, cause without a host, it wouldn't work well.

Some puppet strips featured the host. Tich and Quakers in TV Comic comes to mind, which included Ray Allen.

The Bootsie and Snudge tv programme is one of my earliest television memories ...

Same here, although I can't remember any specific episodes.

Can anyone remember Clive Dunn in Bootsie and Smudge, as the janitor?
(Lew, did my last comment on here get through?)

This was the only comment waiting in the inbox John. When did you post the previous one?

Monday night - it was nothing important, I complimented youbon another entertaining post and shared in Paddy and your reminiscences of Bootste & Snudge, adding that it was a spin-off from the even funnier Army Game, which was like a sitcom of Carry On Sergeant.

Strange. I definitely didn't see that comment John. I've just checked the spam folder to see if it was misdirected there but no sign of it there either.

The Army Game was before my time I think but I've seen clips on TV.

If it ever gets unstuck from whatever cloud it's on, just delete it.
That Fireball strip looks very similar in style to TV Comic's Four Feather Falls. I wonder if Neville Main drew that as well.

He did indeed. Here you go:
http://www.technodelic.pwp.blueyonder.co.uk/Upload01/4FeatherFalls1.htm

Crikey! There's TONS more stuff on that page now than when I last saw it a few years ago!

Hi, Lew. I am looking for samples from the Steed and Peel comic strip from 1966/67 to illustrate an article about the upcoming radio play and reprint from a British company. That means I will have to buy one of get a printable scan (300 dpi), preferably with Emma Peel in it. Can you help or do you know anyone? If so, I can leave contact info.

Hi Ger, I'm not even sure who owns the printable rights to that strip these days. Do you mean the one from Diana? There are samples of that on my blog and there's a book coming out soon reprinting those strips.

That's the book and strip I mean. I want to do a news story for the Dutch magazine Eppo and need a prinatble scan of one of the images. I will have a look at what you have here, but chances are it is too low res to be used in print.