The End of DC Comics in the UK? 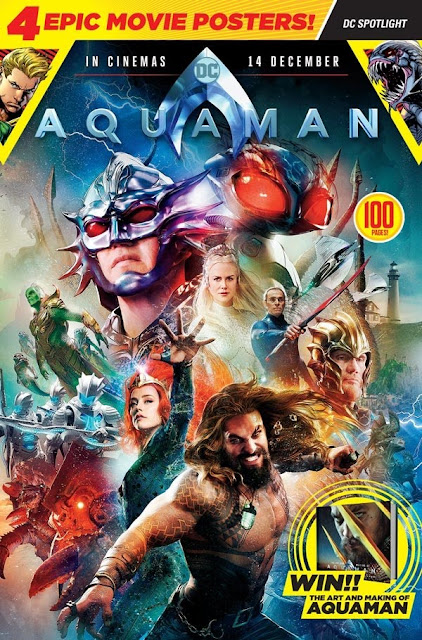 Titan Magazines have announced that the current crop of UK reprints of DC Comics are the final issues.

A brief e-mail was sent out to subscribers last week. See more info at John Freeman's Down the Tubes blog:
https://downthetubes.net/?p=103343

This isn't really surprising. Readers had expressed concern about the erratic nature of the comics for a while now, with titles being suddenly cancelled or changing title. (Suicide Squad became Teen Titans Go! of all things. Scooby-Doo Apocalypse has just become Aquaman.)

It's hoped that another publisher will pick up the licence for reprinting DC Comics in the UK. Ideally, such comics are good value compared to their US originals and help to attract new readers to comics. However, compared to Marvel reprints, DC haven't always fared well in Britain. They did OK in the 1950s, but when Super DC was launched in 1969 it only ran for 14 monthly issues. Likewise, The Superheroes Monthly in the 1980s didn't last too long either.

Although I am a new subscriber to Batman Superman Presents:, I never got notified of its cancellation. Just as I was getting into the new look comic too.

SID, at least they finished Man of Steel. You can pick up the TPBs of Bendis's Action Comics and Superman to continue the story.

Reprint errors
Next issue sale date errors
Lack of communication with subscribers
Titles morphing into others (imagine subscribing to the mature SUICIDE SQUAD, only to see it morph into the juvenile TEEN TITANS GO!)
Lack of updates on the forum/site
Constant relaunches/renaming

Someone on there was quite pissed off that the SCOOBY APOCALYPSE arc they were following morphed into a one-shot AQUAMAN issue.

In the 80s, I read Egmont's DC reprints (via London Editions Magazines/Fleetway). They were consistent. As was Panini's BATMAN LEGENDS (2003-2006).

Titan could have communicated better. I was enjoying their SUPERGIRL title. A fourth issue was announced. It never came on the advertised date. I drove to WHSmith, paying for parking, on a semi-regular basis. Eventually it was announced that SUPERGIRL was a three-issue 'mini-series' (why announce a fourth issue, then?). A Titan employee also told me they'd informed subscribers, but couldn't inform all readers.

Nothing but inconsistencies, which got worse over time. A contrast to how Panini handle the Marvel licence. And a contrast to how Egmont handled the DC licence in the 80s.

I am beyond angry. I don't mind titles being cancelled if they aren't selling - Panini have had to cancel three titles in the last 10-15 years or so - but honesty is best. Don't cancel something and then claim it was a 'mini-series'.

I honestly believe that if a decent licensee were handling DC, they could have at least made a Superman title work (and a Batman title, too).

It's a shame Panini lost the DC licence in 2006. Thanks for nothing, Titan.

Sorry for the anger here.

I'd like to add that I am not seeing the past through rose-tinted glasses.

Other titles, such as DC ACTION and ZONES lasted just a few issues. So I didn't feel anger, they simply weren't selling.

I just wish Titan had handled it better. SUICIDE SQUAD morphing into TEEN TITANS GO! would be like Panini's AVENGERS UNIVERSE morphing into Squirrel Girl or something. Subscribers were often very annoyed, if the comments were anything to go by.

Bleeding Cool reported on the anger and one guy did two YouTube videos, begging Titan to get their act together. They burnt through a lot of goodwill.

It's a shame but it's time to move on now. Anyone wishing to read more DC stories can easily buy the American comics either from comic shops or from sellers on eBay as soon as they're published every Wednesday. Graphic novels are also available. Yes, it'll work out more expensive that way but fans will just have to be selective.

Bear in mind that there are staff who might be losing their jobs due to these cutbacks, which is a more serious concern than being angry because people might miss what happens next in Justice League.

Good point about the job situation - since both Simpsons and Adventure Time have been cancelled in the US, that's two more that Titan will probably have to stop publishing soon. That just leaves Rick and Morty and Doctor Who in this format. I'd say we have reason to be concerned for those titles' future as well.

Well, we'll see. Hopefully Titan will launch some titles to replace them, or perhaps just distribute their direct-sale comics to Smiths in the same way that Rebellion have with The Vigilant and Sniper Elite.

Hopefully Panini will get the license for Batman again, I can't imagine it staying on the shelf for long.

Come to think of it, I wonder if this has anything to do with DC's deal to package similar titles for Wallmart in the US...

Possibly not. I just don't think there's much of a market for DC reprint comics in the UK. Titan had made most of them bi-monthly, which means they weren't selling very well.

It's crazy to think there isn't a Batman comic in the UK again! Legends had a good run really, 15 years in different forms. Titan just never seemed to care all that much, at least not openly. So many people complained (including myself) about their local Smiths all of a sudden not stocking the comics anymore back in 2016 yet Titan never seemed to bother doing anything about it. They didn't really engage the readers like Panini do either which makes Panini seem like they have some passion for the comics.

Very true, Rob. My Smiths always stocked them apart from a cock-up when one of the Batman titles was cancelled (Batman Arkham I think) and Smiths deleted the wrong title (Batman) from their database. (Then in typical arrogant fashion insisted they'd deleted the right one when I complained, even while I was showing them the advert for the Batman comic in another comic.)