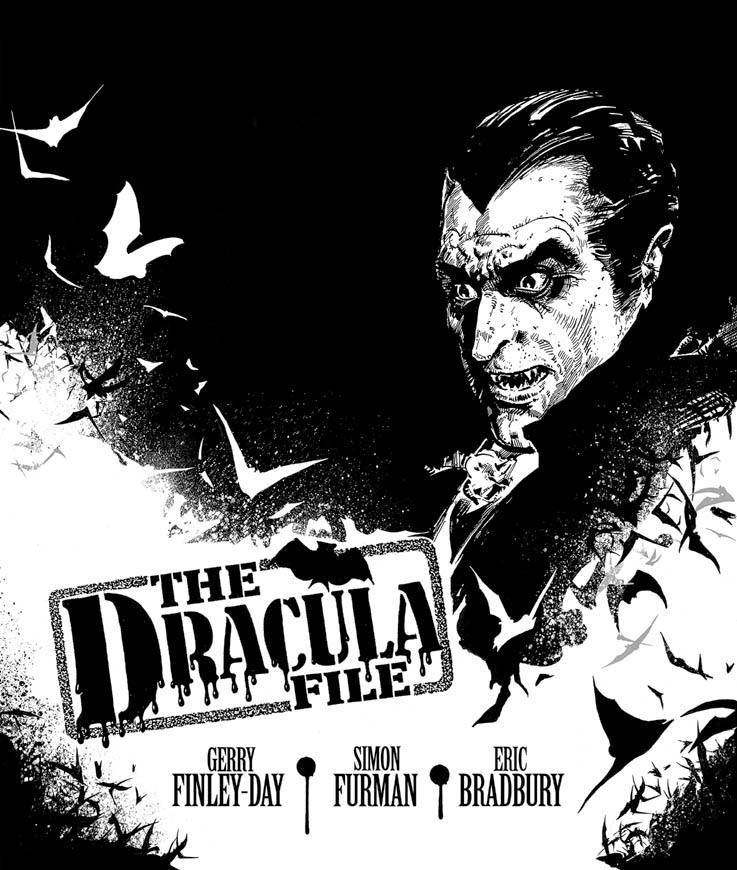 Ireland based publisher Hibernia Comics have produced another winner in the form of an 86 page collection of a classic strip from Scream! weekly. The Dracula File contains the complete run of the fondly remembered story from the 1980s written by Gerry Finley Day and Simon Furman and illustrated by Eric Bradbury and Geoff Senior. 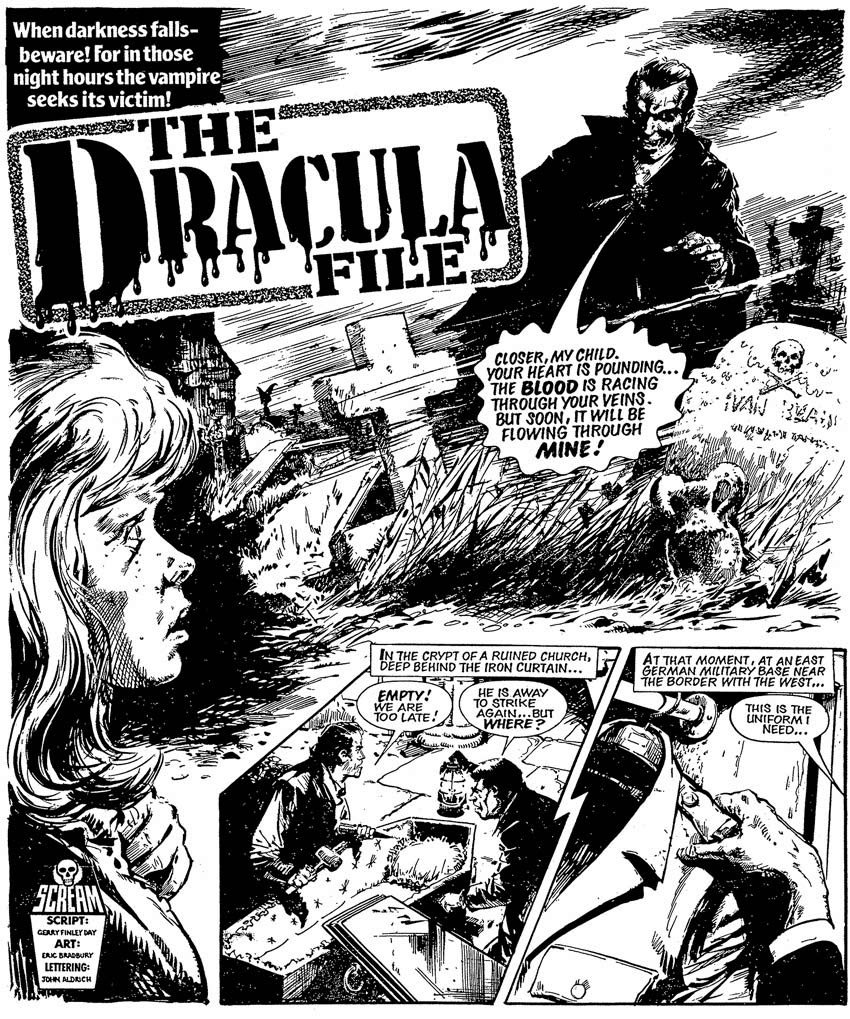 Scream! was a horror comic for boys published by IPC but sadly cut short after 15 issues by a strike. Even though it was only around for a fleeting time the comic has its fans who remember it well. The Dracula File, featuring Dracula in present day England, was one of the best strips in the comic, notably for the atmospheric artwork by the late great Eric Bradbury. Egmont now own the rights to the strip but have allowed Hibernia to publish the comic by special arrangement. 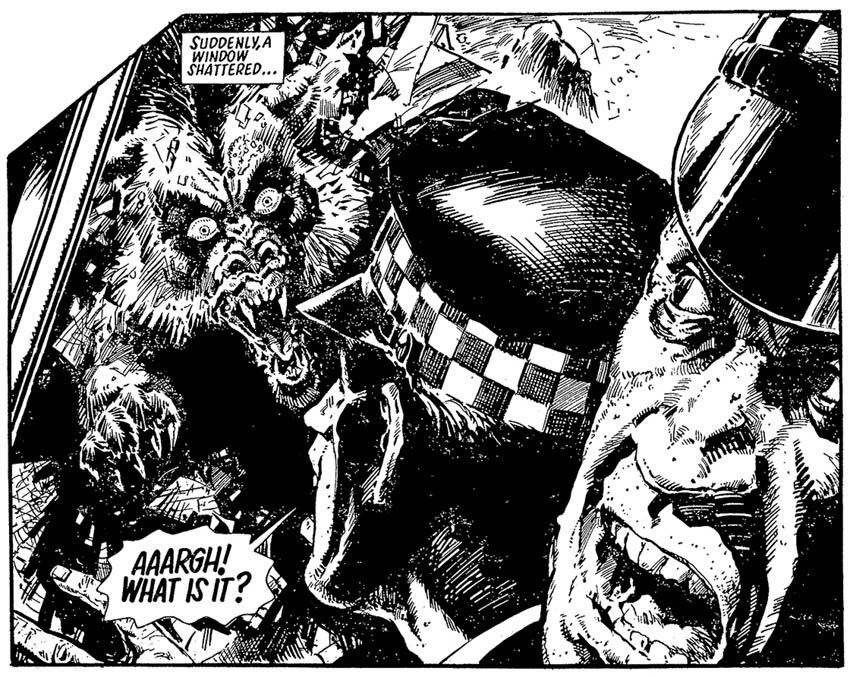 The Dracula File collects all of the episodes plus material from the Scream Holiday Special and bonus features. It's available to buy now directly from the publisher. Check out their other books too. I highly recommend all of them:
http://www.comicsy.co.uk/hibernia 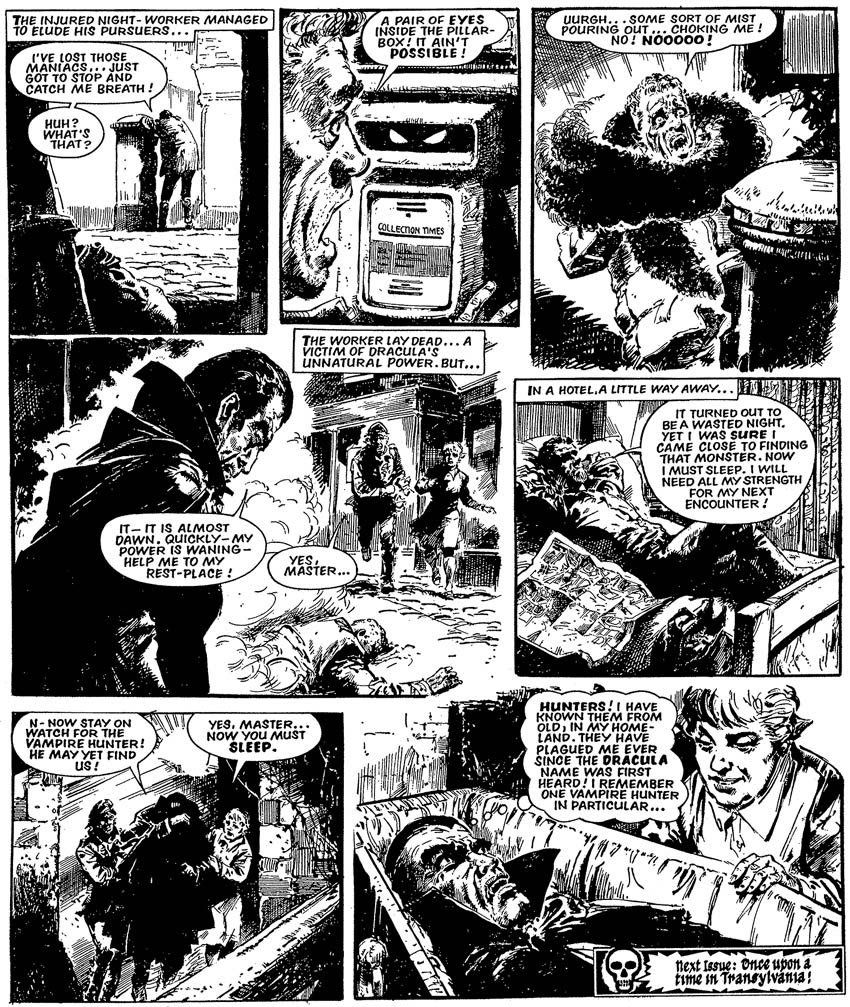 John, sorry I haven't approved your comment. It's my policy not to provide links to piracy websites or similar. I hope you understand. It's nothing personal and of course you're still welcome to comment here.

Anyone interested in this material can buy The Dracula File and the other Hibernia Books. They're cheap enough. #supportbritishcomics

Lew, no worries. I didn't realise it was a pirate site. I regard it as a fan site and didn't view it any differently than the Buster website, who both offer similar services. I am very naive in these matters and am grateful for
any comic sites.
Lew, did I say something wrong on your other blog as well, or have you just not seen it yet?
If I can clarify, by "unsavoury" I was referring to child pornography, terrorism, etc.
No need to print this.

I hadn't seen your other comment until now John. I've just published it.

Thanks for understanding about my anti piracy policy. The thing is that link led directly to the similar pages that The Dracula File reprints. Hibernia are only a small publisher and put a lot of free time and effort into getting permission from egmont, producing their books, etc so they deserve our support. That site you offered a link to states it's not official but carries complete issues to download, so I couldn't endorse it and keep a clear conscience.

Oh, I see, now! It could have affected Hibernia's sales. Sorry, it never even occurred to me! Duh!
All I was thinking was, "If you like Scream, you'll love this site!"
Sorry,Hibernia, I never thought it through!
Interesting thing about Scream is that there was supposed to be a #16, as #13-#15 featured three-quarters of a 4 part poster on the back page.

Thanks for the kind words, Lew.

John - I help out with design and repro work on the Hibernia books, and as it might give you an insight into what's involved here's a brief rundown of what happens to get the books out:

-- Negotiate a deal with the rights-holders to reprint, including settling on a licence fee
-- Re-scan every page from the original comics (or in the rare case it's available, from the original art)
-- Clean up each page for reprint. In some instances, this can be a matter of minutes, in others up to an hour. Multiply that by 80+ pages... :-)
-- Produce new cover designs, sometimes using existing elements, sometimes not.
-- Layout of the whole book, including typesetting, proofreading etc.
-- Secure new introductions from people like Barrie Tomlinson or Rufus Dayglo.
-- Go through final approval with the rightsholders.
-- All promotion, liasing with printers, handling orders etc.

As the books are a niche item, this is all unpaid work with the money from one release being fed into securing the rights to subsequent books.

I don't post this to make you feel uncomfortable, but rather because I think it's sometimes difficult on the outside to appreciate the amount of work and time that goes into even a small, niche release like this (I've certainly been guilty of doing the same at times!) and I think it's worth making clear that these aren't just raw scans slapped together and home-printed! ;-)

Sorry for the delay in approving comments. I've been out all afternoon.

John, no worries. I know you had good intentions, and I'm sure the guys running that website do too. I can understand the frustration of wanting comics that are no longer in print but in this case quite a few of those strips are now in print thanks to Hibernia's arrangement with Egmont. And at affordable prices too.

Richard, thanks for explaining the process behind your books. A hell of a lot of work. I'm sure everyone appreciates all the effort that you and David put into these fine productions. You're doing a fantastic job. I hope that everyone who was a fan of Scream and of the artists involved will buy your comics as the print quality is actually far superior to those old (often grey) newsprint comics.

John - Interestingly, there appears to have been enough material ready to take Scream! to somewhere around issue 18. In fact, in the Dracula File reprint we've included two pages of unseen & unused Eric Bradbury art for the story that were intended for issue 18 (a scribbled note on the art tells us that much) and the stories from the Scream! specials appear to have been linked to the ongoing story and may have been scripts commissioned for the weekly.

Despite legend, it appears that it was an industrial dispute that killed Scream! rather than parental complaints and a lot of material turned up later in other comics (Eagle, for example) or in reprints (the cover of a Scream! issue post-#15 was used on a Best of Eagle reprint).

Lew - No worries. I enjoy the work involved and seeing people enjoying the stories all over again, but there are times when it is very definitely Work-with-a-capital-W ;-)

Thanks for the heads-up Lew. I have just ordered both Scream reprint volumes.

I certainly appreciate all that hard work, Richard ( much more than I ever imagined ) and I certainly wouldn't want to hamper you in any way. I simply thought, "Oh, I remember a website about Scream ( nothing to do with me ), I'll share it with the world on the blogs, as is my way! Please accept my apologies, I just dived in without thinking! I fully support the work that you and others like you do to bring us high quality reprints and I would NEVER do anything to intentionally hamper your efforts. I am sure your books will far surpass anything that can be found online and thanks for the additional info about the lost THREE!! issues.
Best wishes and good luck in everything you do, Richard.
John.

Sorry to hear that Eric Bradbury has died. He was one of my favourite comic artists especially with Doomlord.

Mr.Bradbury passed away in 2001 Sid. Yes, a truly great artist and perfect for horror material. His Mytek the Mighty and Cursitor Doom strips were very atmospheric.

Great, I remember loving Scream in the 80s.
This is an interesting occurence, too. I wonder if Egmont would release the rights to some of the other gems they're sitting on. I emailed them once to encourage consideration of the Baxendale, Reid, Parlett (etc) humour strips as possible reprints. The reply stated that they have no interest in that stuff. Maybe another 'niche' publisher could do something instead of Egmont themselves.
Not having the resources to do it myself, I can but hope.

Yes, it would be great to see strips such as Clever Dick, Faceache, etc collected.

A reprint of humour strips - either an anthology or themed by artist - is one that's being considered at this end. There are a few other projects in the works first, but it's certainly on the list.

Yup, a collection of Humour strips is high on my wish list. Humour comics were my first intro to comics, and the Beano was my constant, weekly quality! IPC did zany and out there much better though, spread across different titles. I think Tom Patterson was probably the first artist I knew by style, then Ken Reid, Robert Nixon etc. These need to see the light of day again, my seven year old's favourite comic is Whooppee monthly, and Smiler is her favourite story! There is life in them yet. Richard has stated very well the work that goes into the books, but its a pleasure to do them and see new life and appreciation in these old stories. Cheers Lew for the support, along with DTT and a few others, its invaluable exposure.