Lion was always a good solid adventure comic and it produced some memorable characters such as Robot Archie, The Spider, and The Spellbinder. Some strips are less well remembered, but in some cases that was due to their short runs not for any lack of quality. One such serial was Flame O' The Forest, an excellent strip which ran in three page chapters from Lion dated 7th February 1970 to the issue dated 7th November 1970.

Flame O' The Forest was set in Norman England after Harold's defeat at Hastings. The hooded Saxon hero of the title fought against the invaders by using skills including magic tricks and archery. For an IPC strip of the time it was notable in its body count, with the Flame disposing of evil Baron Corbeau's men one by one. (Although any true violence happened off panel.) The artwork was by Massimo Belardinelli, several years before he'd be drawing Dan Dare, Inferno, Meltdown Man and Ace Trucking Co. for 2000AD. Belardinelli often poured a lot of time and energy into his work and Flame O' The Forest was no exception; dynamic and crammed with detail, dripping with atmosphere. 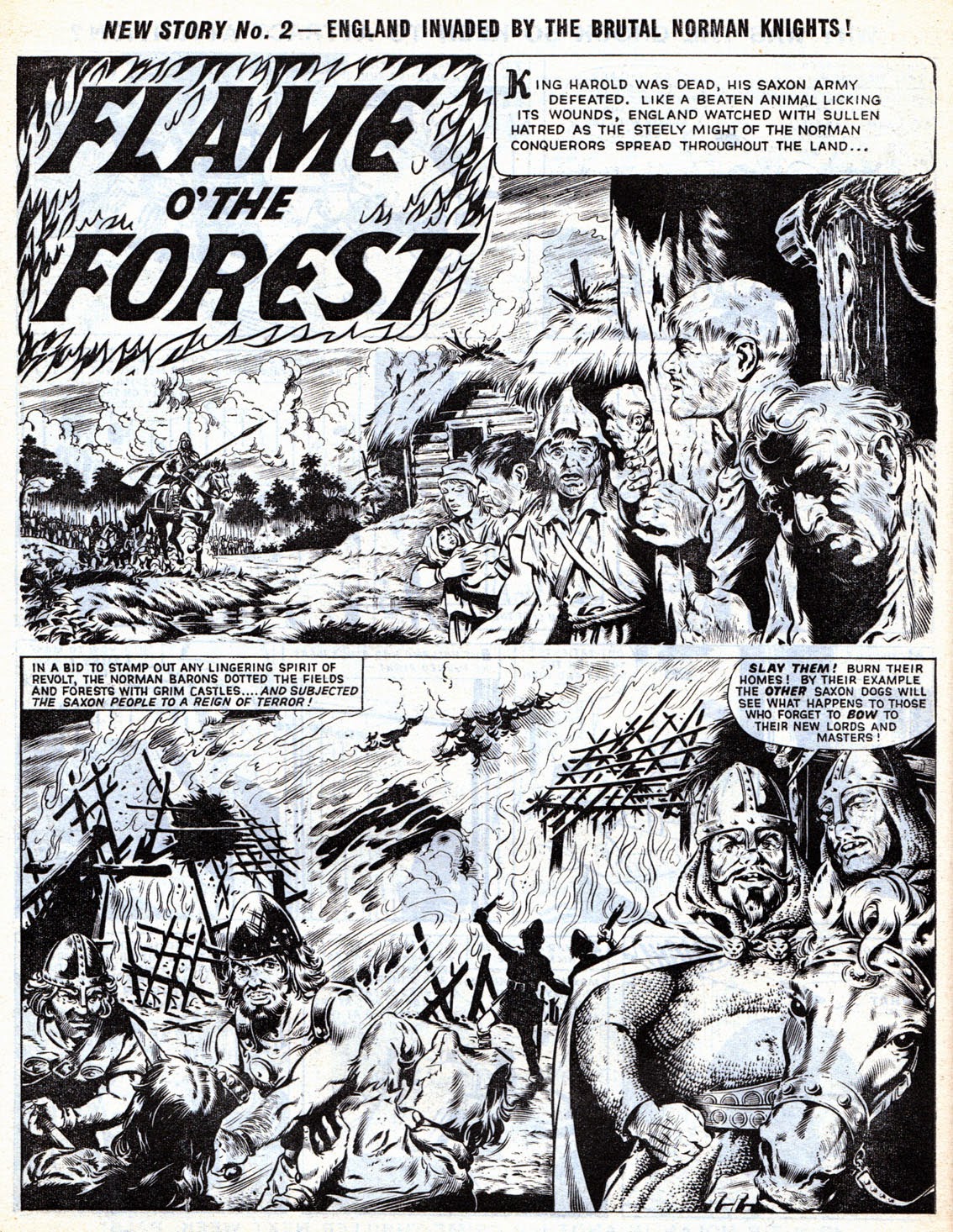 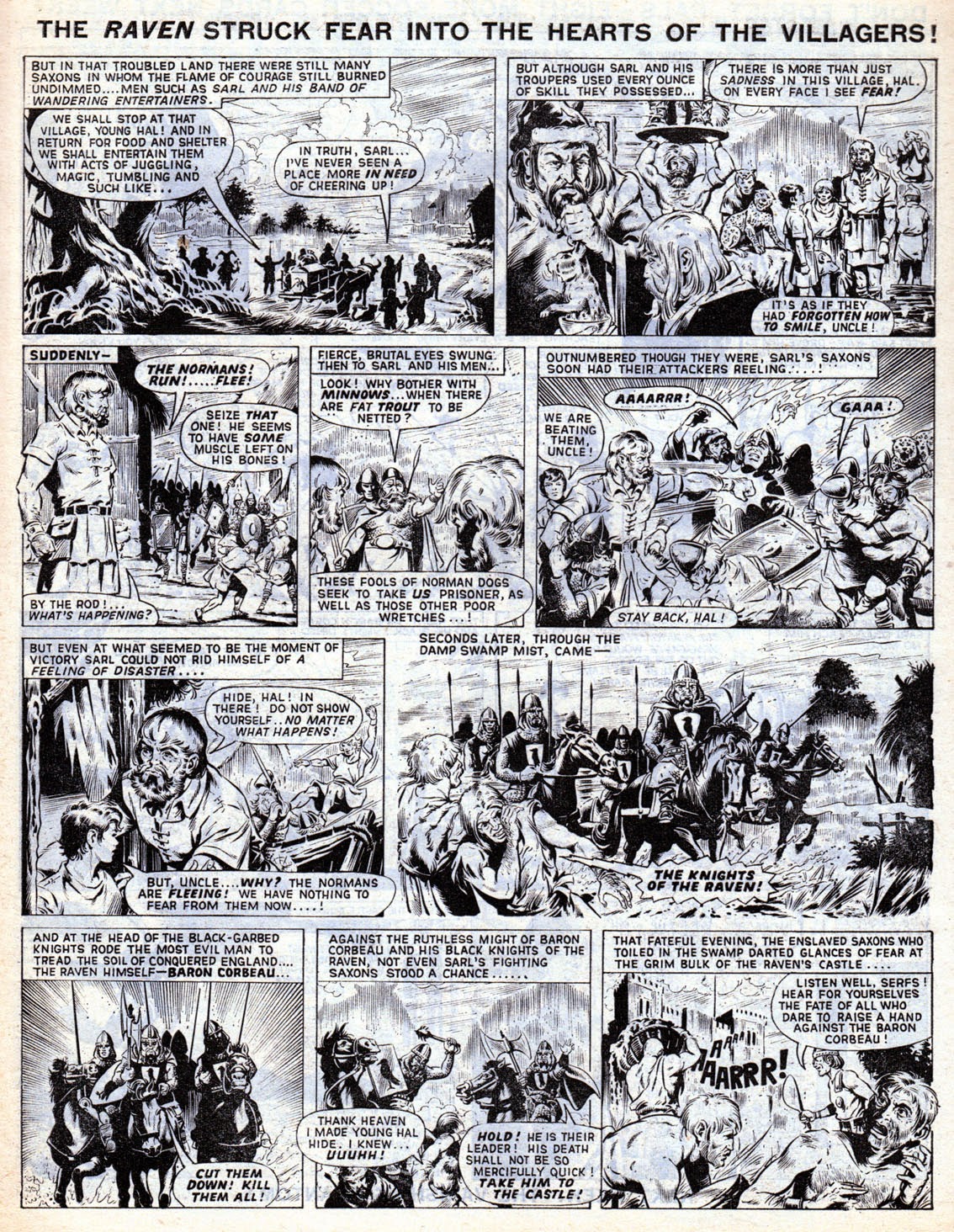 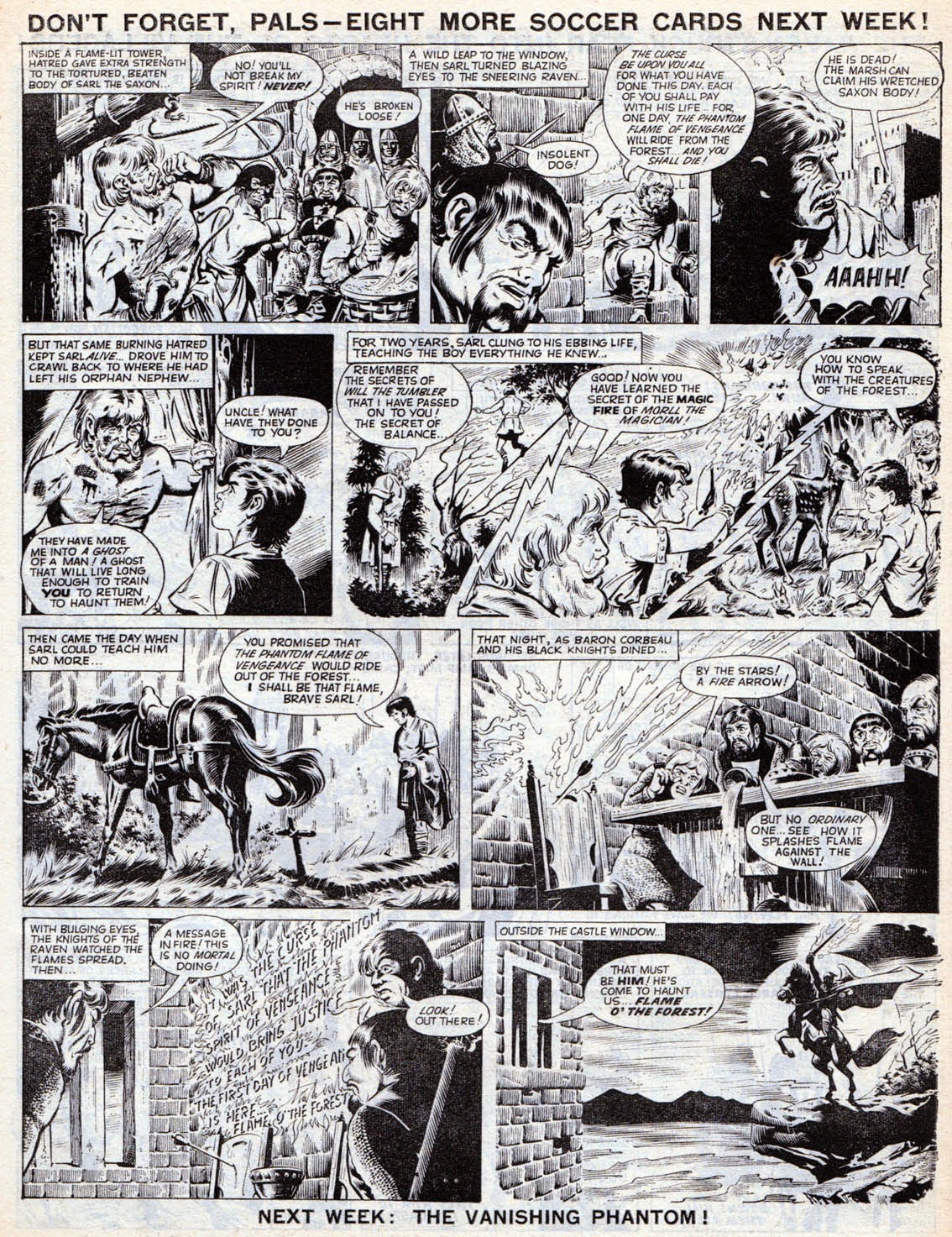 A few selected chapters from the series... 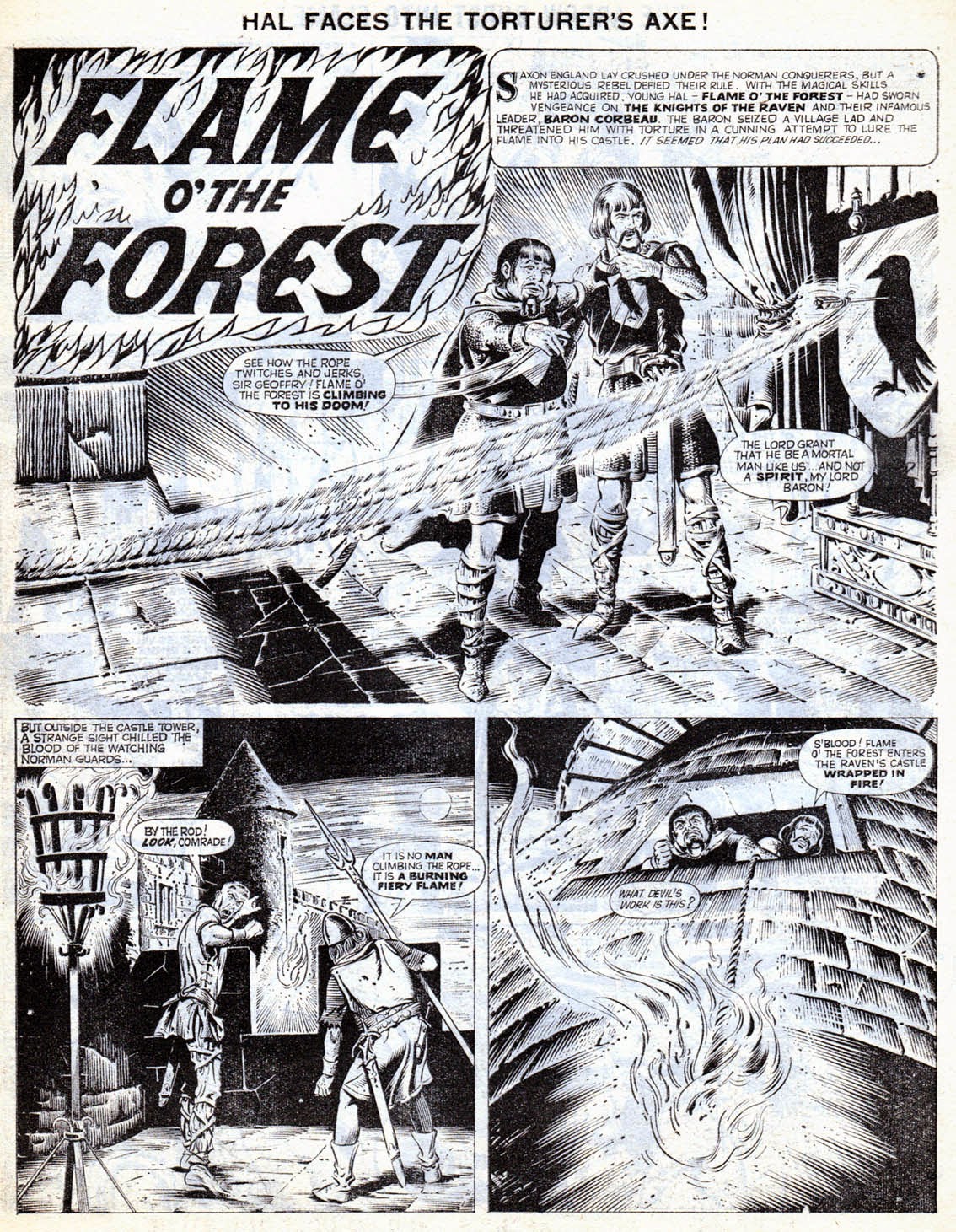 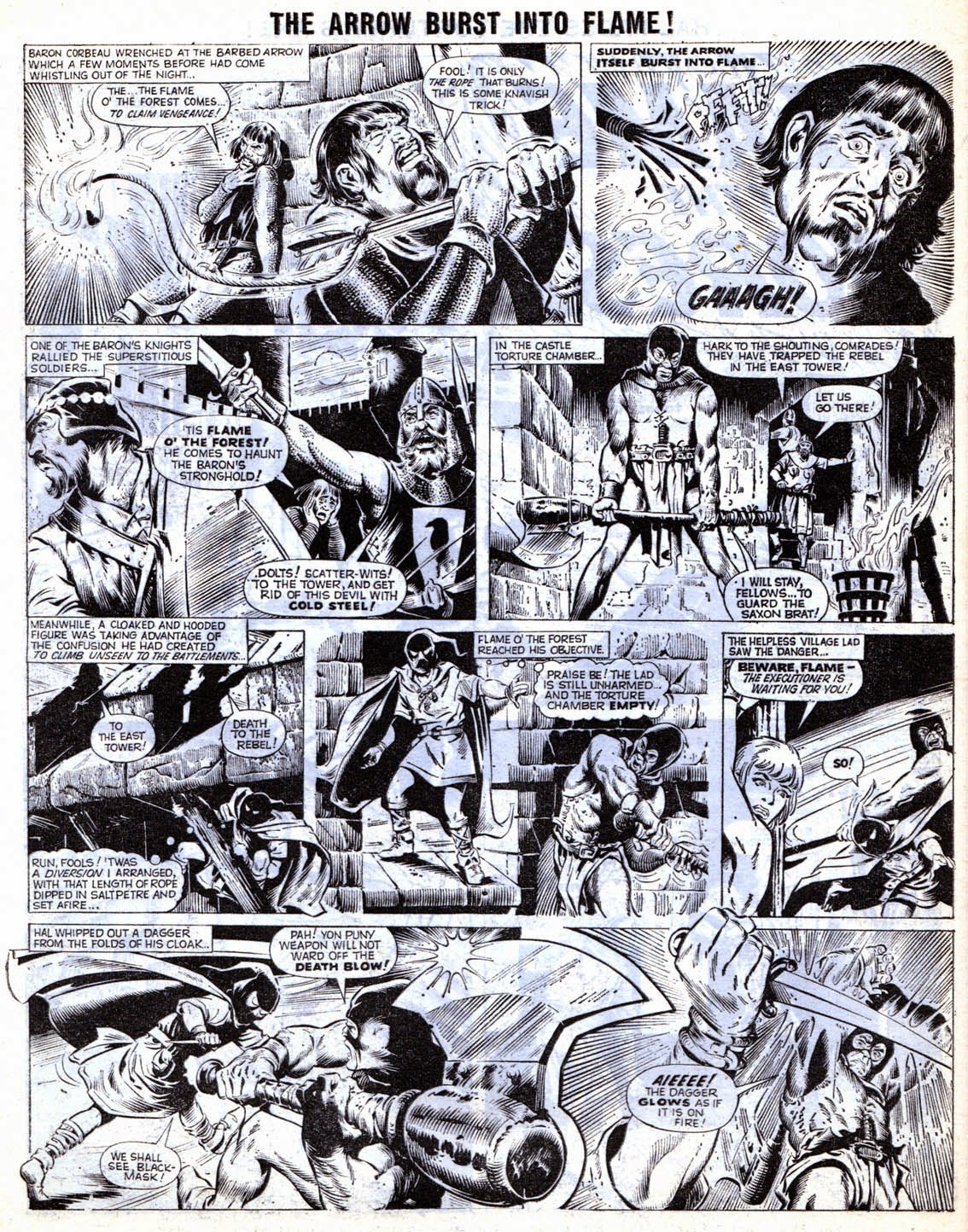 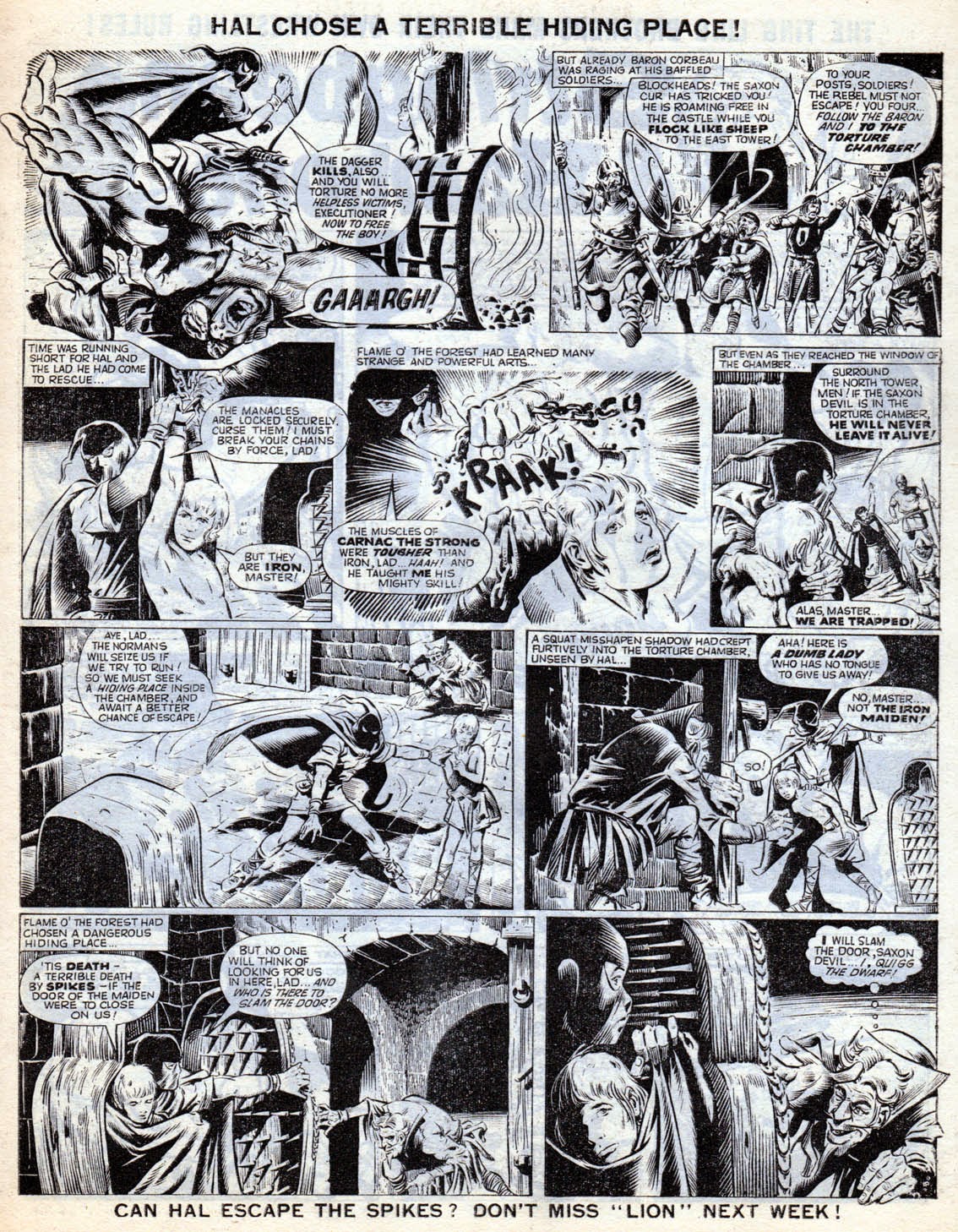 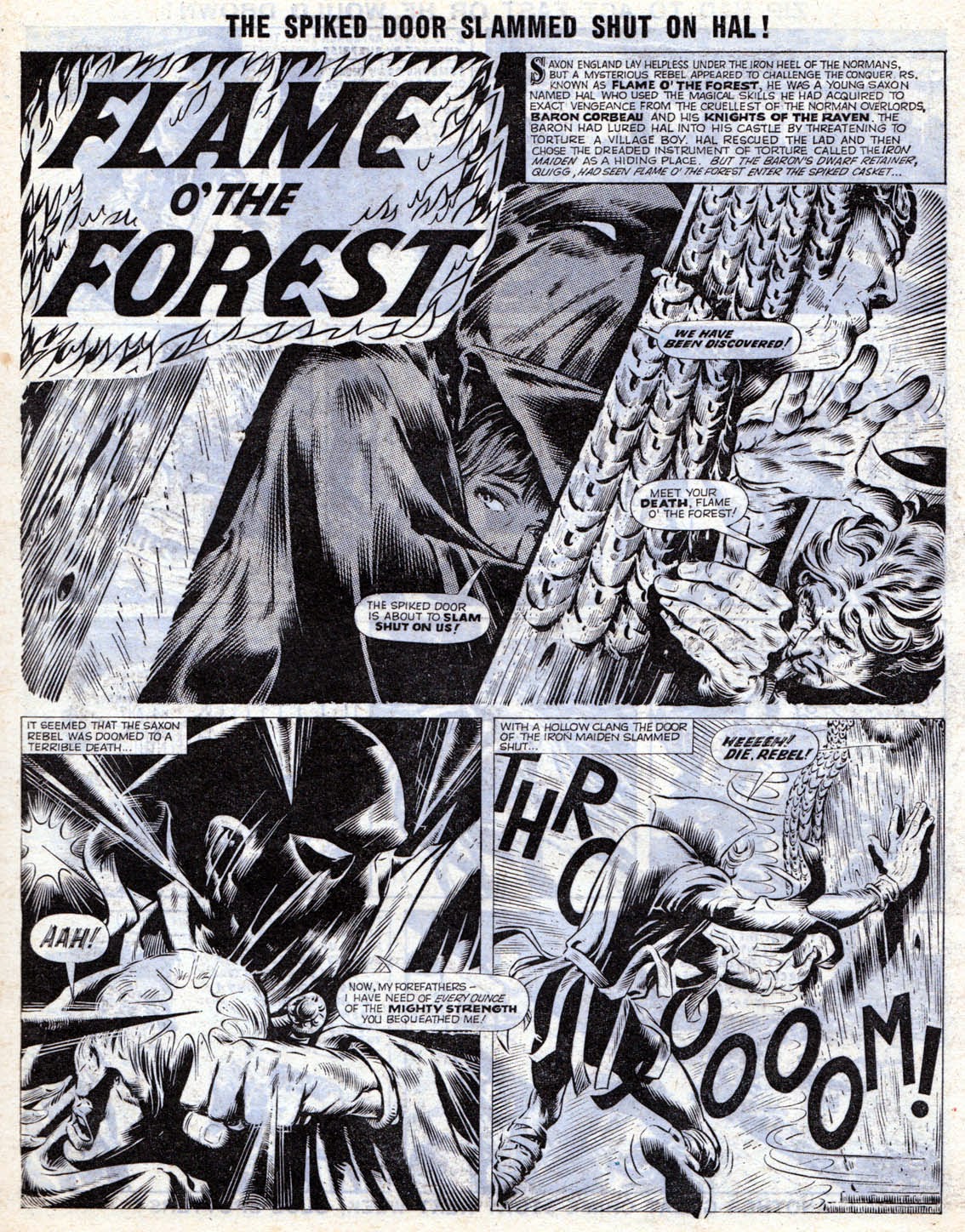 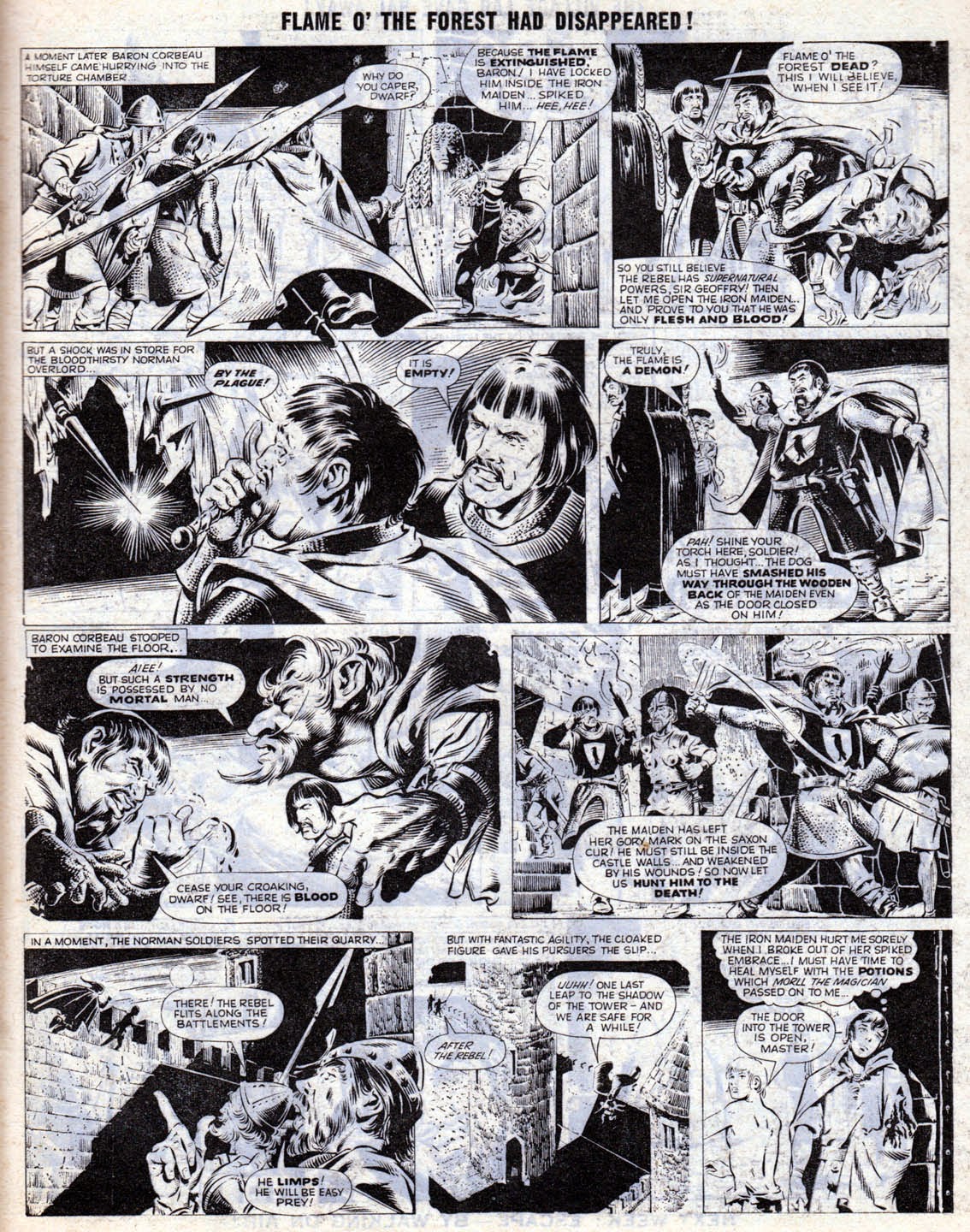 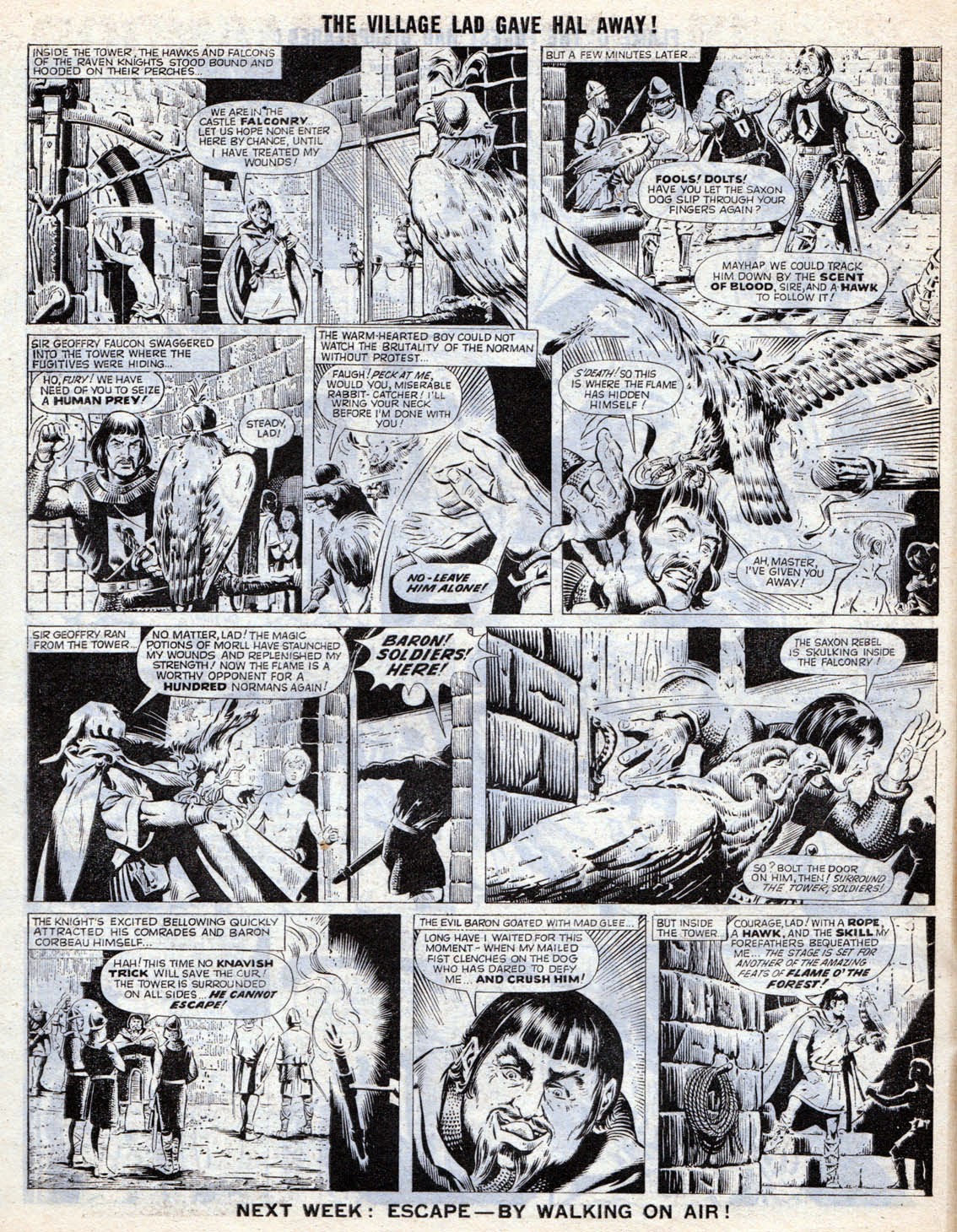 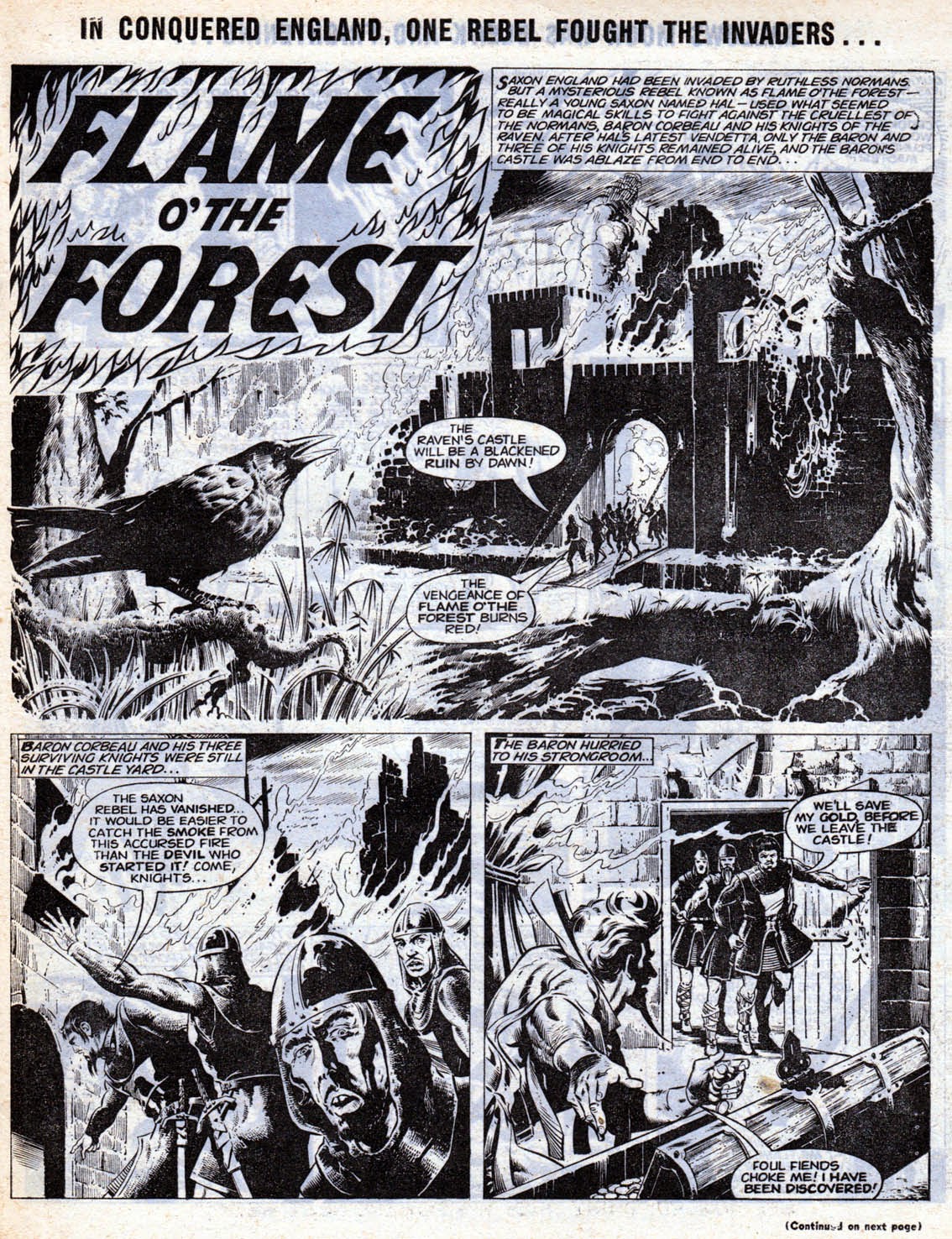 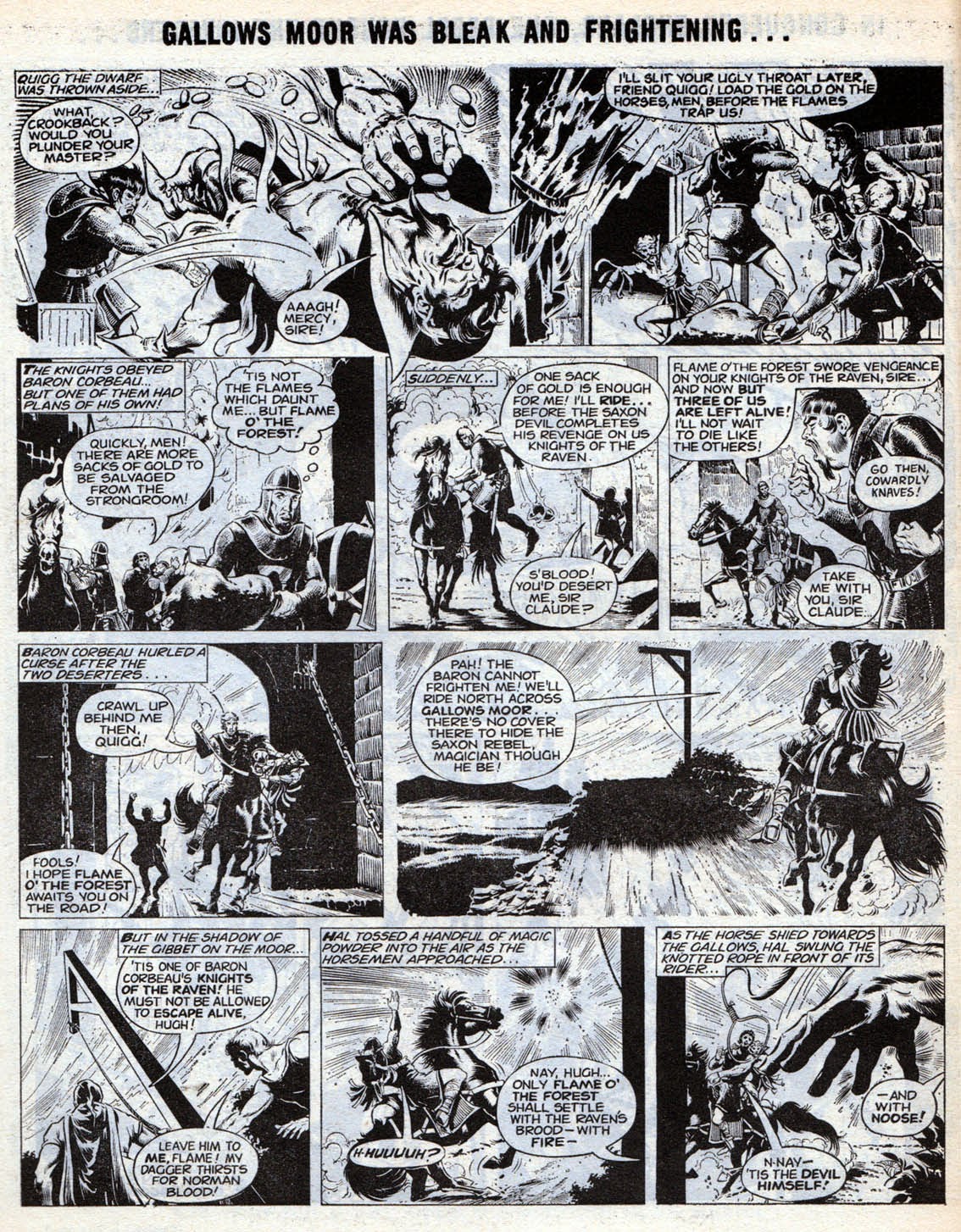 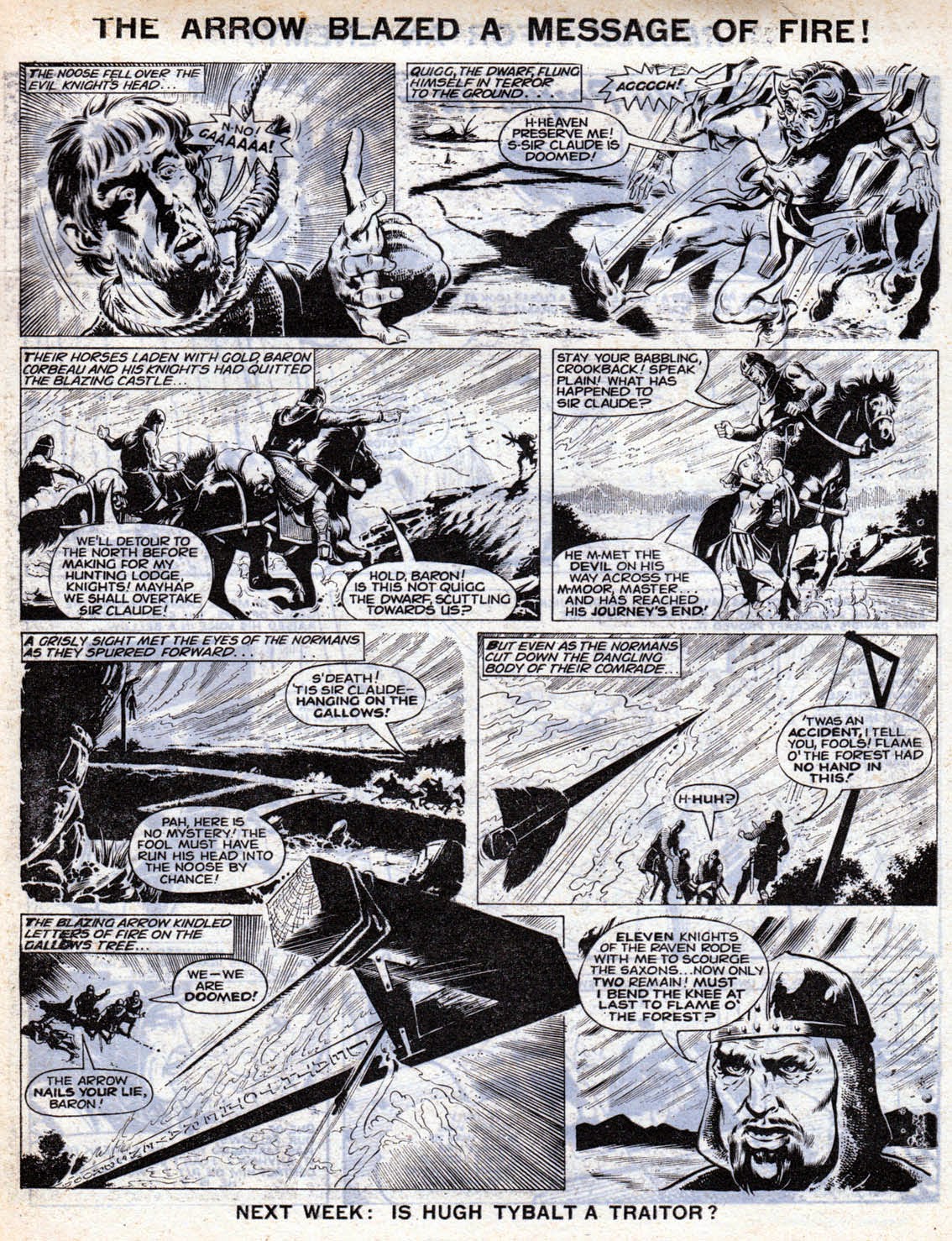 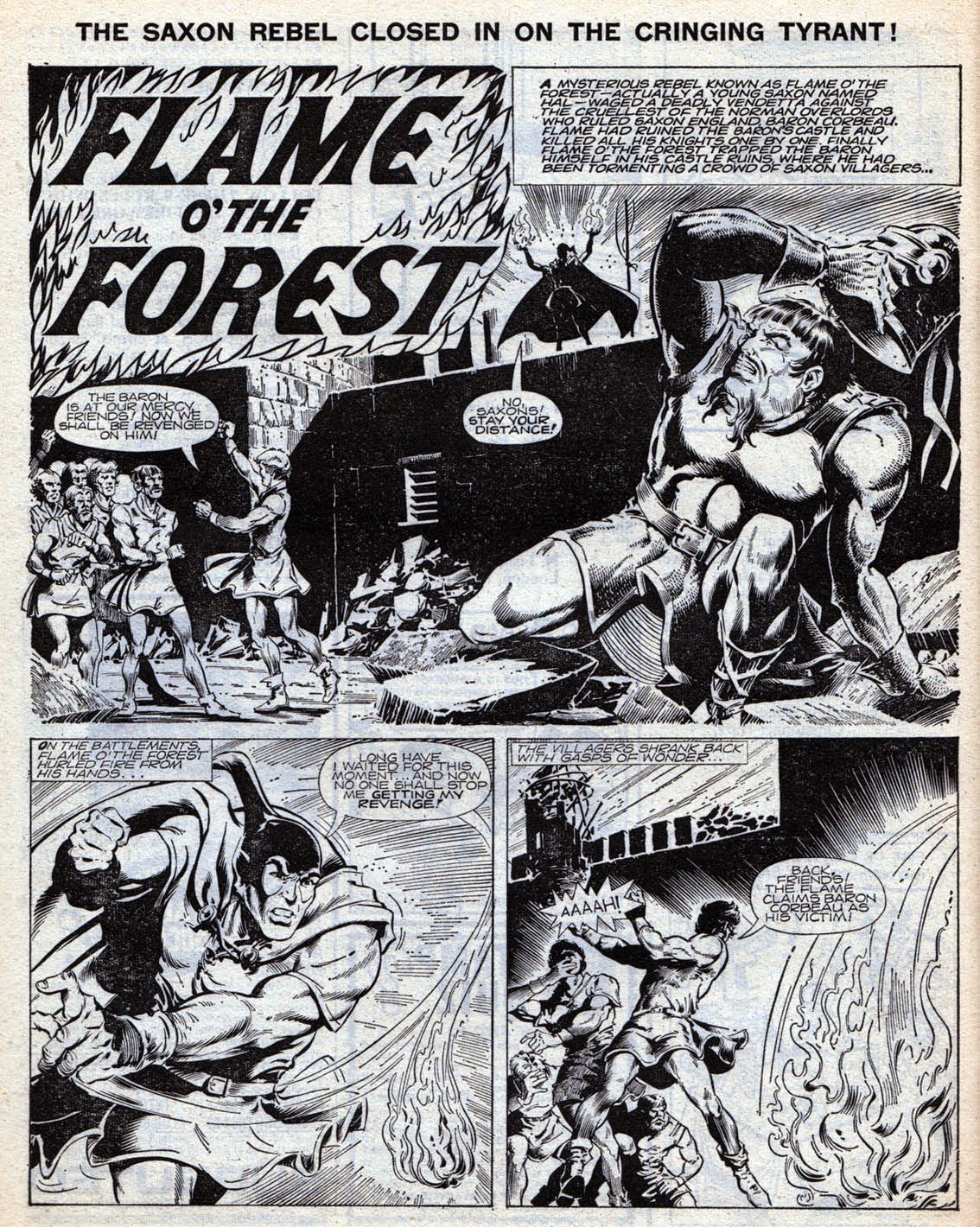 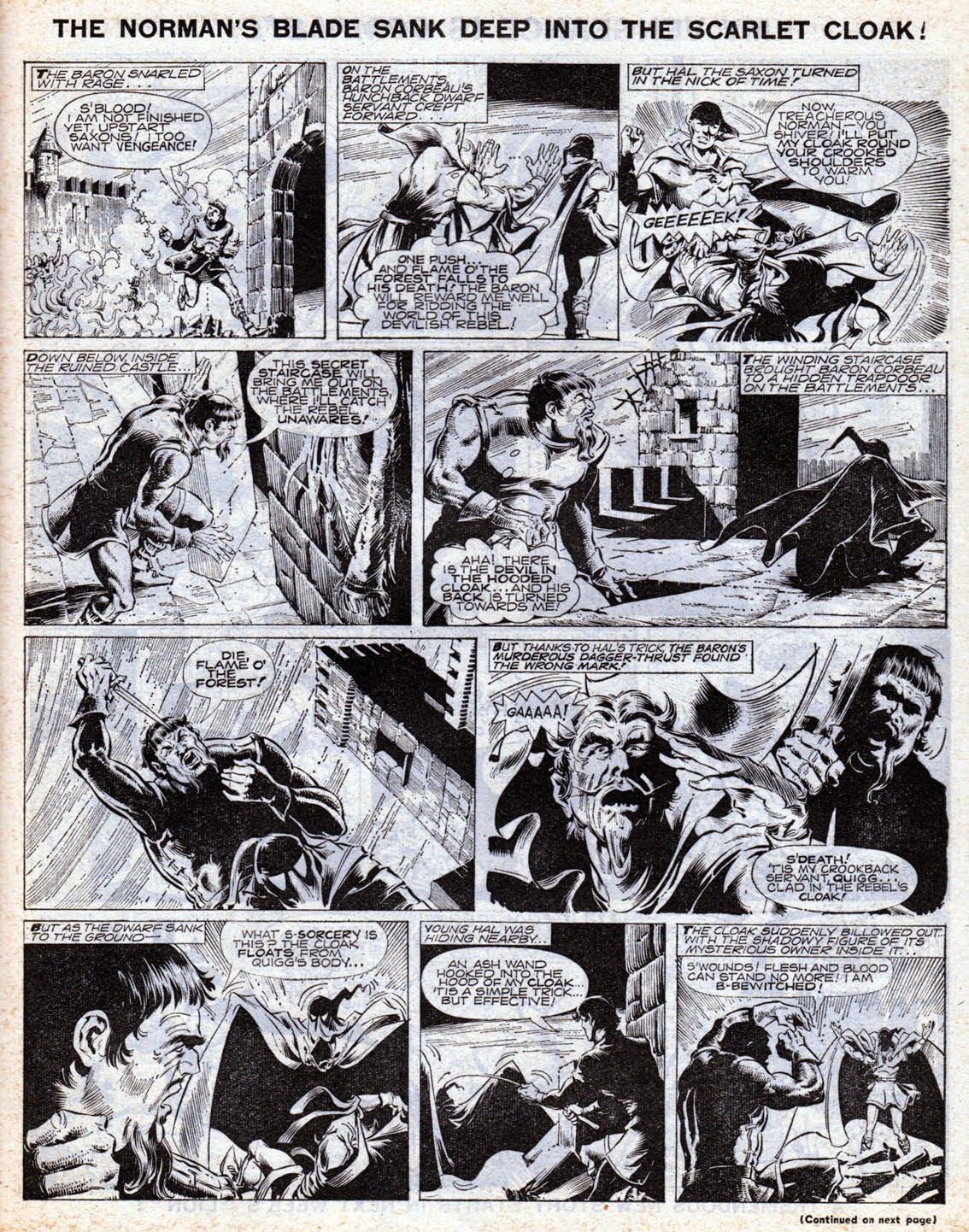 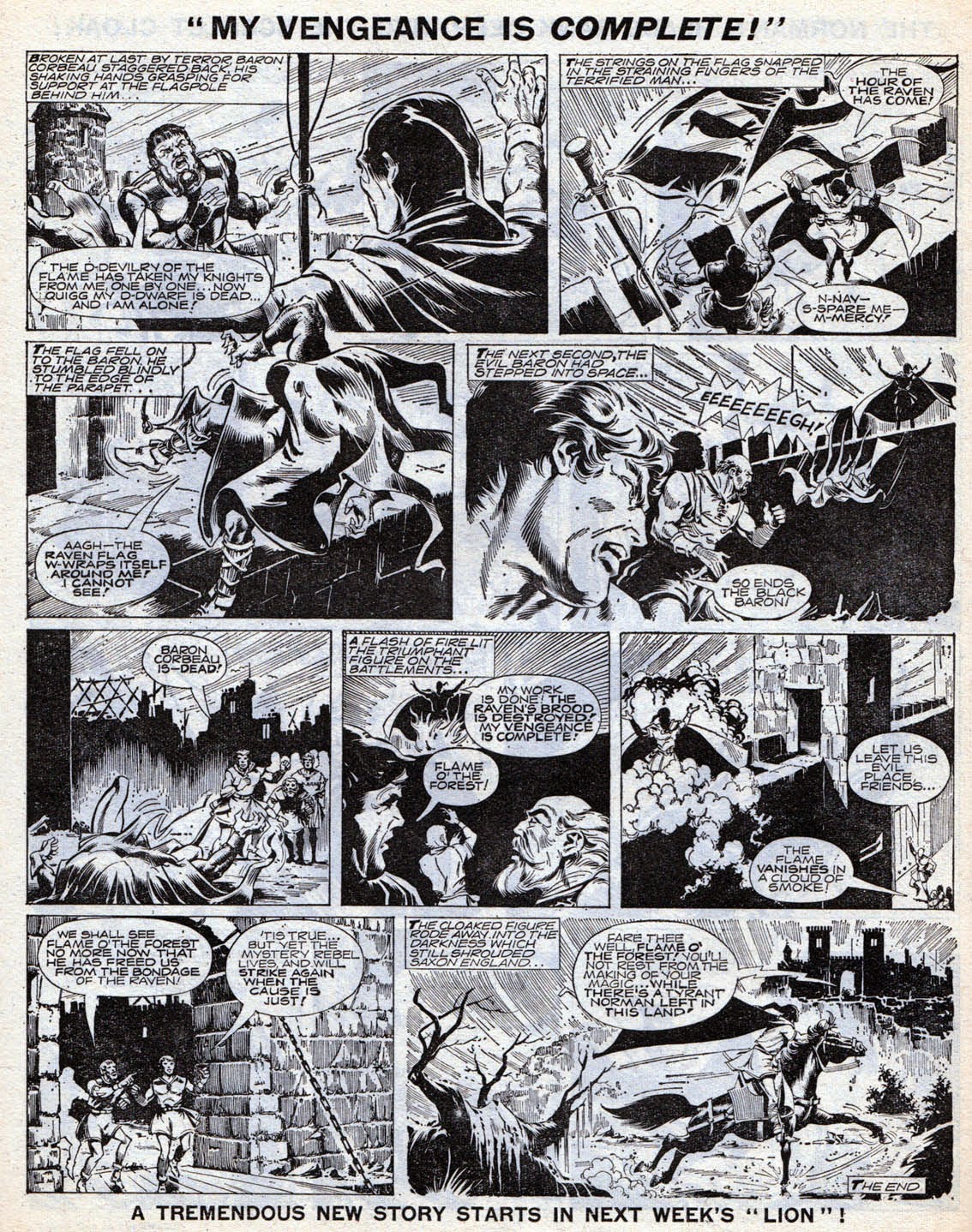 I always liked the strip as a kid. It seemed a bit more dangerous than most of the other stories in Lion. The theme of the lone freedom fighter against oppressive establishment has always been a good one to use since the days of the Robin Hood legend, and later developed by Alan Moore and David Lloyd in V for Vendetta of course. In Flame O' The Forest it's more of a traditional boys adventure yarn but it still had an edge to it. Definitely a classic.
Posted by Lew Stringer at 22:30

Belardinelli's fantastic inking really blew me away on that series, but at the time I can remember being intensely frustrated by the fact that there were so many artists like him in British comics that were never, ever named - even though their styles had become instantly recognizable to me. It came as a genuine revelation when 2000AD started to include credit boxes.

Nice find Lew, I'll have to dig out the Lion's! I probably have the issues, but dont ever recall reading it.

I love blog posts like this...very gripping and amazing what I've read so far...will read them all..

Now that's a series which definitely deserves a reprint collection!

Sadly. by 1970 I was neglecting comics a bit...and unfortunately UK comics had been left in the slipstream of Marvel and the undergrounds.I was 18 and at that moment the UK comics seemed like kidstuff.Of course , later on I was to look at it all again and re-discover the quality of all these great artists.

I know the feeling, Paddykool. I stopped buying UK humour comics between 1975 and 1980. Although I don't think I missed a great deal that would have appealed to me really.

Richard, it'd fit nicely into a single volume. However I think IPC/Time Warner own the rights to Lion material so I doubt it'll happen unfortunately.

This is completely new to me. I really didn't buy/read anywhere enough Lions, (I wish I had them NOW!)
I loved Bellardinelli's work on Ace Trucking and I THINK he did some early Slaines as well, if I remember rightly?

That's right John, and he drew Blackhawk as well.

Lion was my favourite IPC comic in the early seventies. Some really nice material in there.