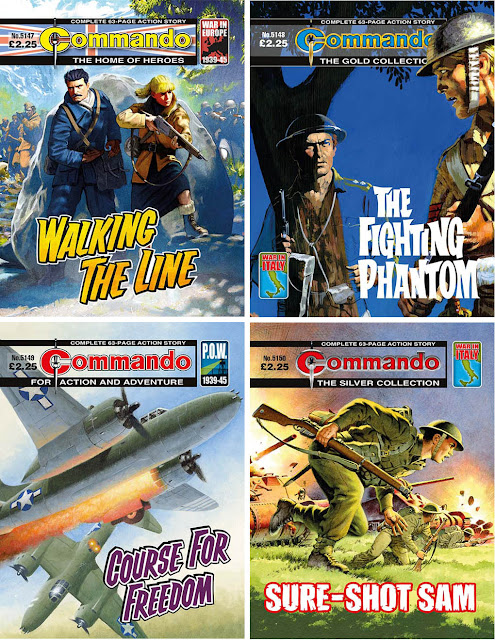 Here's the info on the latest batch of Commando comics, in shops today...

Bailing out of his Stirling Mk. III bomber over Nazi-occupied France, Flight Lieutenant Alan Freeman knew his wits would only get him so far. But, lucky for him, the French Resistance were ready to lend a hand and get him back to Blighty. However, not everything was rosy in the Resistance, and there was talk of a traitor in their midst.

Would Alan make the journey to Spain in one piece? Or would those helping him turn him over to the Gestapo?

First taking us over the trenches in World War I, then across the Spanish border in the Napoleonic Wars, Andrew Knighton’s third issue for Commando is every bit as exhilarating, this time tackling a French Resistance escape line! Matching this with bold interiors from Morhain and Rezzonico, and a marvellously tense cover from Neil Roberts, this issue will keep you guessing until the final pages!

Bert Graham is 50. Serving as a major in the army, he’s nearly as fit and tough as he was way back in the war when he was a sergeant.

He has some really great stories, but none match the one when he and his mates were stranded behind enemy lines – and Bert took his orders from a ghost!

It’s always a pleasure to find an other-worldly issue of Commando, and ‘The Fighting Phantom’ is no exception. With a cracking story from Allan, dynamic art from CT Rigby and a truly spectral cover from Penalva, when we talk about the best supernatural issues of Commando, this one ranks high every time!

5149: Action and Adventure: Course for Freedom

When Jurgen Schwer joined the Luftwaffe in the Second World War, he had no idea that he would become a prisoner of war in the barren Nevada Desert, or even still — a fugitive on the run in Mexico and Colombia!

It seemed that the only way Jurgen could get back to Europe and his family was to help pilot a rogue mission to destroy the Panama Canal. Only then could he begin to plot his course for freedom!

With a quintessential combination of a classic George Low story, with an Axis hero whose conscience takes his arc beyond borders, expressive illustrations from Jaume Forns, and an instantly identifiable Ian Kennedy aircraft cover, this is one heck of a Commando for any collection!

Private Sam Smith was a bit of a misfit. Nobody in his infantry company pushing up through Italy in 1944 knew quite what to make of him — but nobody could say that he wasn’t a crack shot with his beloved Lee Enfield rifle!

And when some petty crooks tried to frame him, they soon discovered — like the Germans — that it wasn’t safe to fool with sure-shot Sam!

The titular Sam Smith is one of Burden’s greatest creations: a seemingly cold-blooded killer, whose only pleasure is from his rifle — but just what is his game? Find out in this silver era reprint with art from Vila and a cracking cover from the great Ian Kennedy!