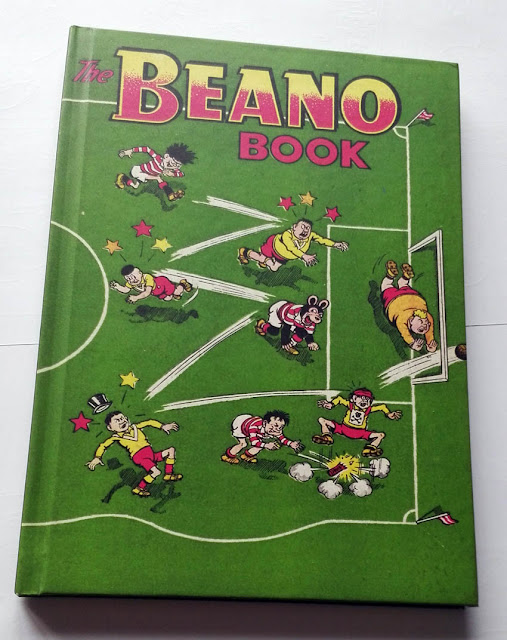 As I mentioned several days ago, D.C. Thomson are now offering readers a chance to obtain facsimile reprints of every Beano annual from the very first one (1940) up to 2013. A dream come true for collectors, and as an incentive for the general reader, each book comes inscribed with a message of your choice. 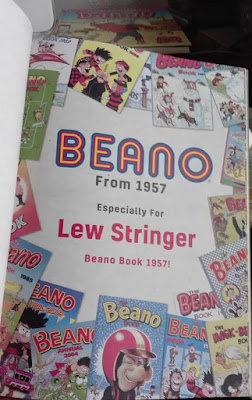 I'd ordered the 1957 annual, not out of nostalgia (it's from a couple of years before I was born) but out of curiosity. It contains some very early work by Leo Baxendale, along with pages by Ken Reid, Dudley Watkins, and many more. What's not to like?
The book arrived today, and I'm very impressed with the quality. All of these facsimile books are scanned from the old annuals, so may contain images of any flaws (such as rips or smudges) picked up from the scan, but the 1957 one doesn't appear to have any. Reproduction is very good indeed, and as close to an accurate reprint as you're likely to get. 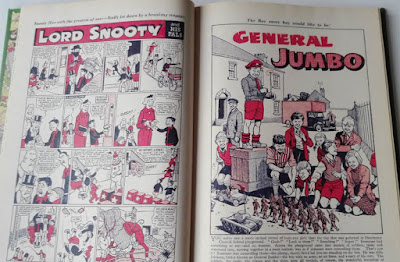 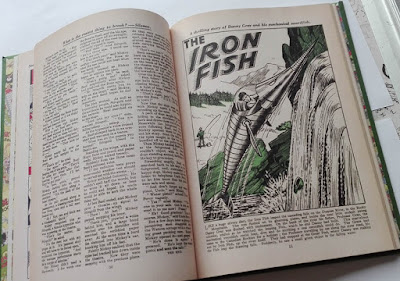 Nitpickers might complain that the books aren't 100% faithful to the originals because they feature a new spine. I think that's fine, and should prevent any dodgy sellers from passing them off as originals. The paper texture is different too; smoother and a bit thinner than the original stock, but still top quality. The binding is glued, rather than stitched, but it still seems sturdy. There are new endpapers too, in addition to the original endpapers, and of course the dedication page is new. Apart from those small irrelevant differences, it's a very nice facsimile indeed. 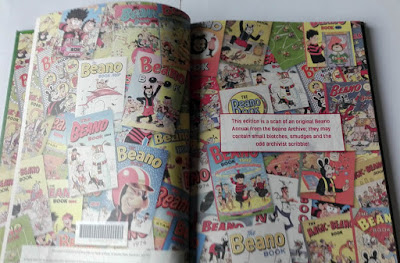 One thing I wish they'd done is to have used one of the additional pages to credit all the artists and writers. Every contributor was anonymous back then so it would have been a chance to rectify that.

I'll definitely be ordering a couple more from different years. I missed out on the 1965 book when I was a kid, so I might rectify that, - and having a reproduction of the first Beano Book from 1940 is tempting too. 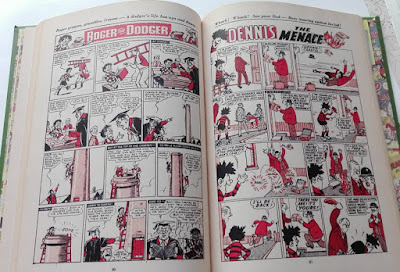 You'll have your own favourites no doubt. The books are produced under license by Signature Book Publishing. I don't know how long they have the licence so if you're interested, here's the place to order your books:
https://shop.beano.com/gift-ideas/classic-beano/personalised-beano-annual-from-your-year.html

It all looks good shame about the spine...ironically the spine is very good on your book...footballers with letters on them saying Beano Book... eeek hope there isn't a time limit on the offer...

I think I'd rather focus on all the good things about it than worrying that the spine was changed. These facsimiles are the sort of thing fans have been wanting for years. Let's celebrate the positives!

Of course...will aim for the 40's and early 50's once money is better...
Great DC Thomson are doing this and the printing inside looks very good and crisp..

I got the 1976 one, arrived yesterday. Not bothered about spine, the nostalgia is worth it! How I remember the Bash Street cut out puppets. Shuddering as I think back to when I cut things out of comics and annuals!

I'd stopped buying the Beano Book by 1976 soI never saw those puppets. I wonder though if they were reprints of the ones in the weekly in the1960s? See here:

Exactly the same ha ha! How history repeats for the next generation!

Reprints in a Beano annual? I thought the only time that happened was that Bash Street story in the 1995 annual which included a few 1940s and 1950s strips (which did seem unnecessary as this was after the Classic Beano and Dandy annuals launched that are dedicated to reprints).

I think there have been a few pages of reprints over the years in the old Beano annuals, James. It doesn't happen now, as far as I know.

My 1955 annual arrived this morning, what a superb job they have done. The spine is right in my view, will look good with a few of them in a row. 😊

The scanning appears to have been done very well, had this rush of excitement when I realised what I was holding, something I had almost no chance of seeing an original, let alone afford one 👍

Yes, buying an original book in that condition would cost a pretty sum these days. These reprints are a great idea.

A quick scan through it and I found two stories about a Ostrich called Big Bazooka. Any relative to the more famous Big Eggo ?

Yes, strange that. He's in the 1957 book too. Someone in editorial must have liked ostriches.