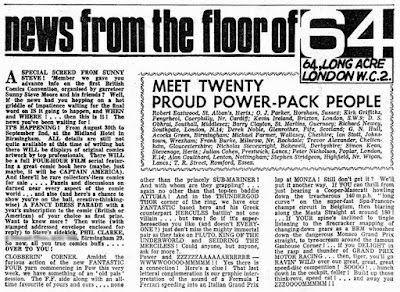 This almost slipped my notice, and sadly I don't have time to post anything but this brief mention, but comics conventions in the UK are 50 years old TODAY!

The very first one was held in the Midland Hotel, Birmingham, from 30th August to 2nd September 1968. Organised by Phil Clarke and the late Steve Moore it was a small event but it had guests including Mike Higgs. The image above shows how it was announced in the pages of top comics Fantastic, Pow! and Smash! back then.

From small acorns, great oaks grow, and these days there are numerous conventions virtually every weekend of the year! In fact I'm off to one this weekend. Join us at NICE 2018 at Bedford Corn Exchange on Sept 1st and 2nd!
https://nicecon.co.uk

Email ThisBlogThis!Share to TwitterShare to FacebookShare to Pinterest
Labels: convention

I went to the first British Con and thoroughly enjoyed meeting other comic collectors. The only way we could contact each other in those far off days was through ads in the Exchange and Mart. I have a couple of photos that Phil sent me later of some people including Phil wearing super hero costumes, I had never seen anything like this before and that was before my first " Dum Dum" - all told it was a great event!!

Yes, Phil told me about that first fancy dress parade. Phil as Captain Marvel, Nick Landau as Captain Cold, Carl Brookes as the Black Terror. I was having a drink with Carl, along with Mike Higgs last night in Birmingham, 50 years to the day of that con's beginnings.

My sister died in 1988, aged 19, but she was born on September 1st 1968. What a strange coincidence that she was born while the first ever UK comic convention was occurring!

19 is far too young to pass away, Colin. My condolences.