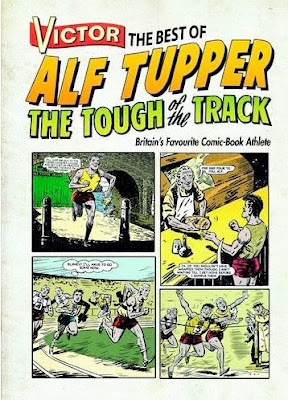 Over the last few years DC Thomson have given us a Best of Black Bob collection, The Best of Bunty,  and two books reprinting classic stories from The Victor weekly and annual. Now there's to be another vintage collection, and this time the focus is on The Best of Alf Tupper, The Tough of the Track.

Here's the publicity information that I spotted in the current issue of the Previews catalogue for comics and books to be published in October:

"The Tough of the Track" was The Victor's most popular hero, having instilled the competitive spirit into millions of British lads for over 50 years. A welder who worked under railway arches, Alf Tupper survived on a diet of fish and chips. He was always the underdog, running against posh toffs who devised underhand ways of keeping him off the winner's rostrum. Although Alf often looked beaten, he nearly always came through in the final few strides, exclaiming "I've run him!" as he breasted the winning tape in a photo-finish. Published in the year the Olympic Games returns to Britain, this nostalgic anthology will not only be the perfect gift for the millions of men whose love of sport was kindled in their youth by Alf Tupper, but will also enthral and inspire a new generation of boys to go and win against all the odds.

Used to love the Victor comic and Alf Tupper was my favourite part of the comic....was still buying the comic when I was in my 20 's....Must get this book....

interesting anyway.. i'm not really a sports guy though.

Alf was always a welder, Manic Man. At the end of the third paragraph of the opening instalment of the first ever series of The Tough Of The Track in 1949 it says, 'His hands were blackened and hard as a result of his job in Ike Smith's two-man welding shop under a railway arch in the town.' Incidentally, as all the serials in The Rover were in text form rather than in pictures, they should not be referred to as strips.

okay, i got confused with another character for the job BUT it was a strip. Just because it was MOSTLY a Text strip, doesn't stop it from being a strip.. Also, not only did they have 1 large image, but a series of 4 or so 'comic strip' like images. A Text strip is a Strip. Don't confused Comic strip with just the word 'strip'.

I'm afraid you're more confused than you thought Manic Man. The Alf Tupper stories in Rover were, as Phoenix said, in text form. Prose stories. I'm not sure what you mean by "text strip" but those early Tough of the Track stories were in the written word with a couple of illustrations to brighten up the pages. (The most similar surviving examples today would be the stories in The People's Friend.)

I should think a "Text Strip" is those stories where it's a series of captions under images, of the kind that ran on the cover of Adventure in the late 50's. I'm not sure Alf ever appeared in this form, jumping from three-column text stories in The Rover to 'pure' comic strips (with small captions and bubbles) in The Victor.
Either way, can't wait for the book! There's an Aussie/Dutch runner at my work who will love to see it. He's going to be running in a world championship (for Holland) in the not too distant future.

Really? I always took Text stories as Strips but text...

probebly getting confused as i take the japanese style kids text strips, where a story can be carried on as text, with a number of pictures, but still often seen as a strip. Just not a Comic strip.. a bit like how the chinese Lianhuanhua are still called comic strips, yet they aren't comic strips as most know them.. that's the problem with terms.. very confusing.. I still laugh when someone seams to think a floppy disk is badly named cause it's hard ^_^

Text stories are just that; stories told in text, or prose if you prefer. I've shown a few on this blog from time to time.

There's one on this post if you scroll down to see it, The story 'I hope Your Plum Duff Chokes You':
http://lewstringer.blogspot.co.uk/2010/12/christmas-1937-skipper.html

Kind of reminds me of the protagonist of Alan Sillitoe's story "The Loneliness of the Long Distance Runner."

There are similarities although Tough of the Track predates Sillitoe's story by ten years.

I'd love to see DC Thomson reprint something like V for Vengeance from Hotspur - sure Alan Moore used this as a partial inspiration for V for Vendetta.

The real thing is here ;-)
http://www.toughofthetrack.net/chapman_textC.htm

I used to love this strip when I was a kid and the book was a fun trip through memory lane. The W.H. Oami story especially
I vaguely remember a story where somebody from a running club found out a young Alf was wearing their club vest without leave so they had...no surprise... a race to settle it.
Thing is, the other runner was a girl.
Anybody else remember this one or was it a figment of my deranged imagination?

If you haven't bought this book yet, Bargain Book Time has it at the bargain price of £3.99. That shop sure lives up to it's name! They also have some of the Commando compilations.

I think the plumber was Bernard Briggs whose sport was football.

I think that W H Oami ended up being twin brothers who cheated to beat him in a race, but were found out in the end.