The return of Julius Sneezer! 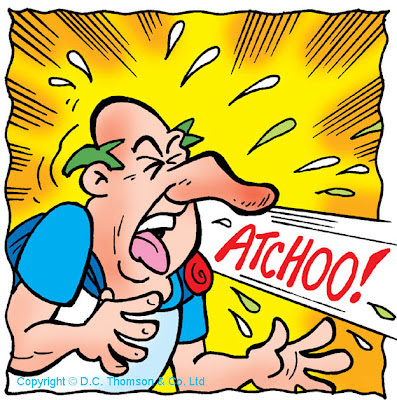 According to Amazon, The Dandy Annual 2013 should be available today, and I understand it should be out in shops this weekend too, weather, distributors, and shop staff willing. (Or not, see update at the foot of this article.)

Anyway, as the books are supposed to be out today I'll now reveal that one of the strips I've drawn for The Dandy Annual 2013 is... Julius Sneezer, The Sneezing Caesar! This character originally appeared in The Dandy Nos. 332 to 348, waaaay back in 1946/47! The artist was the brilliant Allan Morley.

I drew three single page Julius Sneezer strips, from scripts supplied by editor Craig Graham. Reviving a character from the golden age of comics was an engrossing but very enjoyable experience. I was free to use my own style although I tried to "ghost" the character design of Allan Morley as best I could as his original version was so perfect. I didn't have any examples of those 1940s strips but Craig (and, presumably, D.C. Thomson archivist Morris Heggie) kindly sent me scans for reference.

As mentioned on this blog two months ago, the other character I've drawn for the Dandy Annual is The Smasher. In that instance I wrote the scripts as well, and I tweaked the character design to bring my own approach to the strip. It seems to have divided opinion from the brief glimpse I showed before, but I hope the readers will warm to it. 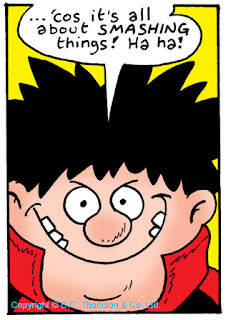 The Dandy Annual 2013 celebrates 75 years of the world's longest running comic by bringing back loads of old characters, drawn by today's artists. I haven't seen a copy myself yet, but I'm really looking forward to seeing my fellow Dandy pals putting a new spin on such favourites as Greedy Pigg, Winker Watson and Keyhole Kate. I'll be looking out for it in the bookshops from today.

Alternatively you can order it from Amazon. (Which I've done, to make sure of a copy.)

UPDATE 7th July 2012: Unfortunately the annual wasn't released on July 6th, and Amazon are now claiming it's not in stock. Hopefully shops will have copies soon. My apologies if I wasted anyone's time. In future I'll ignore proposed publication dates and will only promote items that I physically have or those I know have definitely been published.
Posted by Lew Stringer at 00:00

I just checked my account at Amazon, and the listing itself, abd it still says that it won't be despatched until 1/9/12. Unless something happens in the next couple of hours, I'm not expecting this until September.

Amazon.co.uk is still listing it as being published today. Could it be that your Amazon branch down under is getting it later?

To be honest, I'd be surprised if it DID come out today but the Dandy and Beano books have come out in the summer for the last two years so hopefully it'll be out very soon.

No Lew, I ordered it through amazon.co.uk (as I do with all DCT annuals)

Sadly, we don't have an Amazon office here in Australia.

As it's still early days yet, I'll check later on. (I wouldn't be surprised if it does get shipped today however. :) )

I'm looking forward to seeing your take on the Smasher :)

Oops! they have changed the date (I didn't see that this morning.)

I remember last year about the annuals coming out early.

Looking forward to seeing this (and the Beano and Dandy compilation book) in a few weeks.

I can't wait to get a copy! It looks smashing! (No pun intended)!

siiigh, I despair of the Dandy I really do. Now they're taking old characters and rebooting them with snot jokes. One word. WHY??

Julius Sneezer is NOT about "snot jokes".

Or should that be SNOT about snot jokes!

I'm sorry that was SNOT funny.

I'm going to BOOGER off now.

While you said that Juilius Sneezer was from 1946/47, wasn't he in the Dandy book 1953? (the year it changed title from 'Dandy Monster Comic' to 'Dandy Book'.

And lets be fair to the guy that didn't want to put a name to his comment.. He would be wrong from what I known, but he might be talking about Keyhole Kate ^_^

Its a character named Sneezer, he sneezes with snot shooting out of his nose. My guess is it's supposed to be funny. So... snot jokes.

There's also beads of sweat flying off him, but I assure you the plot doesn't involve "sweat jokes".

Such visual effects are just there to emphasize the impact of the image. I assure you the jokes are about the sneeze, not what's up his nose.

I buy my copy off the book depository. It's pretty good value. I just can't wait until it arrives! It sounds super, and I can't wait to see the classics return!

I looked in Smiths yesterday and the new annuals were not there, but they were selling off all of last years annuals so they must be imminent. I'm really excited about all the old characters coming back. Julius Sneezer appeared in some of the 50s Dandy annuals I think. Certainly a good choice to come back.

I just looked on Amazon, both the Beano and Dandy are out of stock.

You jumped the gun on this one Lew. Shop assistant said they won't be out for another 2 months. That'll be September as usual then.

What made you say July? LOL!

I was repeating what I'd been informed by Amazon and other sources.

Annuals have been published earlier than September for a while now. Last year's books were out in July:

I had this e-mail from Amazon:

"We regret to inform you that your order will take longer to fulfill than originally estimated. Our supplier has notified us that there is a delay obtaining stock for the following items you ordered on July 5 2012.

We are awaiting a revised estimate from our supplier, and will email you as soon as we receive this information."


Please make sure of your "information" in the future Mr Stringer.

Some days I don't know why I bother.

According to your e-mail you ordered the book on July 5th, which was a day BEFORE I wrote my blog post, so you must have noticed that Amazon claimed the book would be in stock on July 6th.

I published the info as it was then in good faith. I can't be held responsible for delays by the publisher and/or bookseller.

You WORK for the publisher. You should have checked.

I've already apologized if my posting led people on a fool's errand. What do you want, blood?

"You WORK for the publisher. You should have checked."

boy, some guys are nasty-nasty.
anyway.. You said the matter is closed with, so fair enough for me.

lew,
i read all these comments about julius sneezer that he was around in 40s/50s, a character from way before my time... but why did i think that definitely had heard of him?
then i realised it was a character called JULIUS CHEESER!!! that i remember vaguely, he was a cat from the '70s comics i believe...

just to let you all know that the dandy annual 2013 is on sale NOW from play.com. Sadly its a little bit more expensive than amazon.

its okay Lew, really looking forward to this one! should be good :)