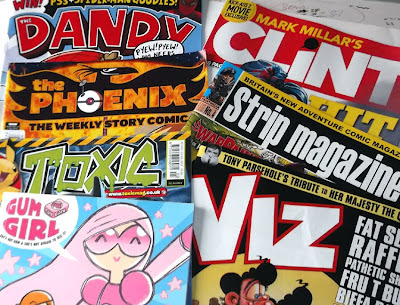 Last week, The Spectator featured a well-intentioned but surprising article by Paul Abbott bemoaning the apparent lack of a UK comics industry:

Today, James Hunt responds for The New Statesman explaining that we do actually have a comics industry thanks very much, if people take the trouble to look:

Unfortunately there's been a handful of people online over the past year or two claiming the British industry is either failing or already dead. Sometimes it's just the rants of bitter individuals who are no longer working in the industry, or nostalgic people who wish the type of comics of their childhood were still being published. Unfortunately their comments can influence a few people who, without checking for themselves, go on to repeat the myth that UK comics are a thing of the past.

To a certain extent the critics do have a point. The mainstream UK comics industry is far less healthy than it was 40 or 50 years ago and I doubt we'll ever see a return to those glory days. But it's certainly not dead. Comics have broken away from solely using the traditional weekly-in-newsagents format and branched out as graphic novels in bookshops, subscription-only comics, or online models. Just because WH Smith no longer has shelves creaking under the weight of dozens of comic titles doesn't mean they're not out there.


Check out the sidebar on the right for the websites of all the mainstream comics currently available. For up to date news about other exciting developments in British comics visit Down the Tubes and the Forbidden Planet International blogs to name but two.

I'd say more but I have some pressing deadlines for all those comics that apparently don't exist. Back to the drawing board...

I'd also dispute that the US market is as healthy as it's made out to be. As far as I can tell they're both suffering from the same problems: a decline in relevance and utter domination by the main stable of books at both Marvel and DC, properties dating back to the 1960s in one case and the 1930s in the other. The market is barely sustaining itself either side of the Atlantic... but nonetheless, it IS sustaining itself.

when i was a kid there were few breakfast cereal brands to choose from; weetabix, rice krispies, corn flakes, etc, we all know them well. but, now there are so many subtle different varieties of weetabix and others, the supermarket shelves are full of them....
the opposite has happend with the uk comics industry, back in the day there were a variety of comics covering the genres of fun comics, boys adventures comics (war, soccer, sci-fi etc), girls love/pop/fashion comics, etc - but now there are only a few traditional uk brands; dandy, beano, 2000 ad, being the most prominent...

One problem is.. well.. people are idiots. They like to say there is a HUGE difference between something that is 100% drawn story comic, and a magazine that has the odd articles, games etc, as well as comic strips. But if you go back to the origin's of comics, the ones with text stories, activities etc, are the 'real' comics, if you like to use that word.. Personally, I don't. So what if there are two different types of Comics (at lest), they are both Comics. Simple as that. When i went into Tosca the other day, there must have been at lest 20 different types of comic/comic magazine. And that's without a full count. Also, digital comics don't seam to count.. Else the American comic trade, the European Comic trade and Japanese (comics are still bloody big there) would be more healthy then anyone wants to admit. Sadly, people think they are no longer 'relevant' because they aren't to them.. Maybe they should truly look around at the huge range on ofter these days by tons of smaller (or often, big but not heard of out side some circles) companies.

@Anon, Thing is, comics have changed, just as they always did. The type of girls comics you mention were really only popular for a few decades.

Traditional boys' comics, for want of a better term, died out because they didn't move with the times. (Look how tired and old fashioned Tiger and Victor looked before they folded, despite several cosmetic revamps.) However competition from video games also played a huge part simply because playing a computer footie game had become more exciting than reading Billy's Boots.

Comics per se are still around, albeit evolved.

No one's denying that the superb variety and volume of comics we used to have is greatly diminished, but critics who write off an entire industry just because it hasn't stood still need to have another look around. (Not having a go at you Anon. That's just a comment about harsher critics.)

I always look to see if Dandy and Beano are on the shelves after reading what you said about distribution problems, and sure enough, the Dandy especially is very very hard to find in newsagents, comic stores, supermarkets etc in central London. As far as I can see none of the big comic stores (Orbital, Forbidden Planet, and Gosh) stock any of the DC Thompson titles, which seems to me a bit of a shame (they seem to have everything else).

I'm sure comic shops could stock Dandy and Beano if they wanted to. Some do (such as the excellent Nostalgia & Comics in Birmingham) but most don't sadly.

Yes, distribution in the High Street is getting worse, no thanks to poor displays and comics being stuffed in small shelf areas back to front, upside down, obscured by other comics, etc. Kids can't notice comics in that sort of situation and as older readers leave it becomes harder to attract new ones.

If it gives you any heart Lew, the children's comics sections are always well-stocked, tidily arranged and at ground level in the two South Manchester newsagents I regularly frequent - your blogs have made me make a point of keeping tabs on them! ;-)

OK. Time for me to de-lurk. A few words about your choices.

CLINT is American reprint.
STRIP seems to have vanished, no new issue for months.
The last time I looked TOXIC was a magazine NOT a comic.
PHOENIX? Where? Never seen a copy.
GUM GIRL??? Ditto. Small press?

Doesn't leave much left does it?

There IS no British comics industry, just a handful of comics hanging on, surely doomed. The small press is thriving but non profit making. No one can make a living out of comics in the UK now.

I'm sorry "S" but you're talking nonsense. Myself and others have been earning a living in UK comics for years.

As for the rest of your comments, just because you haven't seen various comics doesn't mean they don't exist. I reviewed Gum Girl on this blog a while ago. Look it up.

Toxic may be mainly magazine based but the current issue had 8 pages of strips. Should they not count, just because the rest of the mag is feature based? In that case, perhaps Eagle, TV21, Look-In, and all other titles that were never 100% comics should be written out of history as well?

S, did you even read all the way to the end? As Lew said in the original post, there are links in the sidebar to some of the current titles - including Strip Magazine. If you look at their site, you'll see that they're about to have a revamp. The website also explains the reason for the gap between issues. And as for Phoenix, that's only available at Waitrose or comic book shops, or by subscription - again, information you can obtain from their website. You've never seen a copy because you've been looking in the wrong places.

Thanks for this and all the other blog posts. However big the UK comics industry is it should thank you for being a great advocate and ambassador. Scott

Thanks Scott. I'm no Denis Gifford or Paul Gravett but I do my bit. Every little helps I hope.

Certainly not dead - you're spot on that the model we grew up with has largely vanished, save for stalwarts like the Beano and the Dandy, but they are different times, piles of weekly Brit comics were essential to us as kids before home video, multi channel TV, video games and easy web access. But over on the Forbidden Planet blog we struggle to get enough free time to cover just what's going on in the UK scene right now, it's pretty damned vibrant, both the self published small press (and the events they organise themselves too) through to such a welcome resurgence in professionally published comics work here from Nobrow, SelfMadeHero, Knockabout and Blank Slate. Every year after the series of guest Best of the Year posts I post my own picks of the year and I've been really delighted that I had so many comics works published here that I wanted to squeeze into that list. Don't get me wrong, love comics from anywhere we can get them, but still makes me happy that I read more good ones produced here than I could fit into my Best Of post and I don't say that out of rah rah, support British publishers loyalty but because they put out some damned fine reading. Long may that trend continue...

Thanks Joe. Experiences like yours are exactly what we need to counter the negativity and pessimism from some quarters.

The small press might not make profits, but it's still making comics! Some of them damn near professional - like Spaceship Away and Sweatdrop Studios.

Spot on, Mike. Some of the artwork in small press comics is exceptionally good, and production standards these days are often on a par with mainstream comics (or better in some cases).