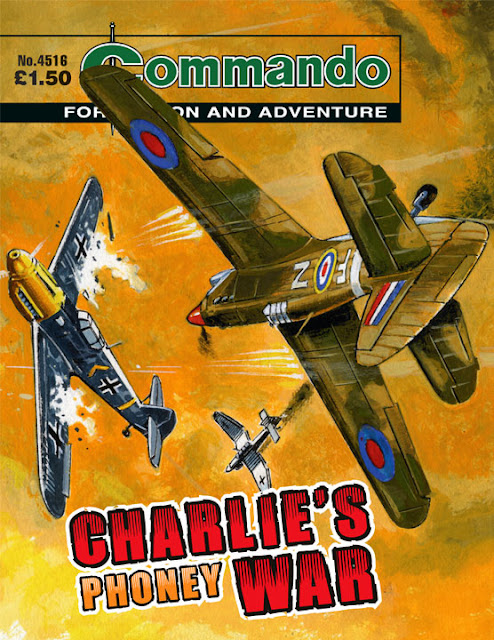 In the shops now are the latest batch of four Commando comics. Here's the PR, kindly supplied by Scott Montgomery at DC Thomson. 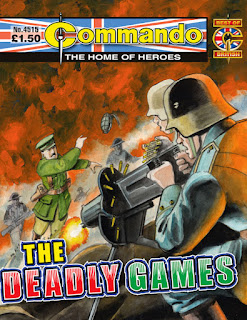 In 1920 the Belgian city of Antwerp hosted the Summer Olympic Games. Russ Wynn and Dave ‘Bunny’ Hare were two of many accomplished yachtsmen there, but a chance encounter with a shady figure from Russ’s recent past brought to light a thrilling adventure from the First World War…and a blood debt that was still to be paid!

Charlie Hutchins reckoned he was the most frustrated Hurricane pilot in the RAF. He was champing at the bit to get at the Luftwaffe kites he could see over the German border but standing orders at this early stage of the Second World War stopped him nipping over to knock a few down.
What he couldn’t know was that the so-called Phoney War was just about over. Soon he’d have his hands full dealing with all the Jerries he could possibly have wanted. And a few more for good measure. 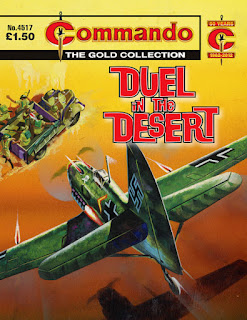 From Nazi High Command the order went out — “All men and vehicles of the Long Range Desert Group must be destroyed — at any cost.” And the LRDG men smiled grimly. They were marked men. Rommel was out for blood.
So they sped out of their desert lairs to take up his challenge.
This is the story of a handful of daredevils in a lone truck, on a mission with no return tickets…

In the year of the 70th anniversary of the battle of El Alamein, this story of desert raiders paving the way for the advance with a daring night attack behind the lines is very appropriate. Men like the crew here risked everything so that the men of the infantry in the van of any advance had the best chance of success possible.
But don’t think this is a history lesson. Ken Barr’s cover sets the scene for a tale of adventure and action that starts as a slow-burner which explodes into crackerjack action in the hands of Dorward and Martin.
Speaking of burners, check out the interrogation scene…

Duel In The Desert originally Commando No 38 (September1962)

After barely escaping from the blazing wreck of a shot-down Anson, Ray Lyall was constantly haunted by the memory of that terrifying experience.
As the newly-appointed navigator of a Lancaster bomber Ray was responsible for the safety of all the crew — and his nerve could crack at any moment! 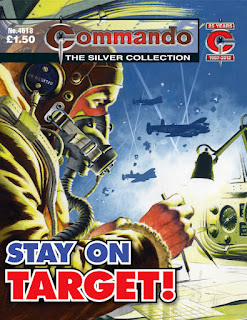 Commando air stories usually feature dashing pilots and daredevil action. So, at first glance, Stay On Target! — with nervy navigator Ray Lyall as its main character — might sound a little underwhelming. This couldn’t be further from the truth, however, as the story is subtly different from the perceived Commando norm, while still delivering the expected aerial thrills like dogfights and bombing runs. This is an understated gem, with an engaging script and dynamic art. You’re on course for a cracking read!

I think the writer of Charley's Phoney War might have had a swift read of Derek Robinson's excellent novel "Piece of Cake" as a number of the plot points are very similar. Still its a rollicking good read and Carlos Pino is as good as ever on art so can't complain really. Overall a good crop of books this week