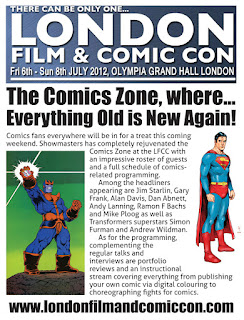 This coming weekend (Friday 6th to Sunday 8th July) sees the annual London Film & Comic Con at the Olympia Grand Hall London. This year the organizers Showmasters has given the Comics Zone part of the event a facelift, with Mike Conroy bringing in top guests from the UK and USA such as Jim Starlin, Alan Davis, Mike Ploog, Simon Furman, Gary Frank, Dan Abnett, Andy Lanning and more.

Guests from the worlds of film and television include Gillian Anderson, John Simm, Bernard Cribbins, Jeri Ryan, and Karl Urban who's playing the title role in Dredd, the forthcoming new Judge Dredd movie. Sounds like it'll be a great weekend!

For more info visit the website at http://www.londonfilmandcomiccon.com
Posted by Lew Stringer at 23:00