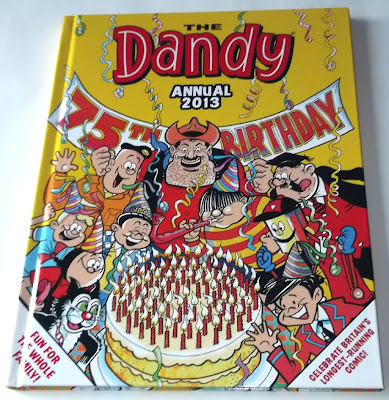 Here it is! The Dandy Annual 2013 with a great cover by Nigel Parkinson. Time was when comic annuals came out in early September, but now they have a longer shelf life to hopefully maximise sales. (It's certainly worked for The Beano Annual, which has been the top selling annual for the past couple of years.)

Traditionally, annuals were given as Christmas presents, and I know some of you won't be receiving yours until Christmas Day so I'll only show a brief glimpse of some of its pages here to avoid too many spoilers.

This edition of The Dandy Annual is somewhat special as it celebrates the comic's landmark 75th birthday (coming up in December). To mark the event the book brings back a load of classic characters in brand new stories, - Brassneck, Winker Watson, Greedy Pigg, Owen Goal, The Jocks and the Geordies... and even a new adventure with Black Bob!

The Black Bob story is drawn by Steve Bright and he does a fantastic job of ghosting the style of Jack Prout, the original artist. The story is in four single page chapters scattered throughout the book, so each chapter ends on a cliffhanger as the original series often did.

...and I've done a couple of characters too, - The Smasher and Julius Sneezer. 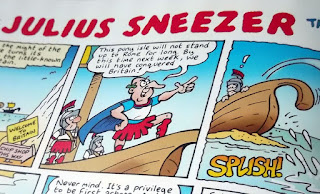 All in all it's a very good annual. Packed with strips that often have around 10 panels a page, which gives a bit better value for money than the average 6 panels a page that many annuals used to offer.


Despite the plan to get it in the shops early, I haven't actually seen it on shelves yet, but it is available to buy from online booksellers Amazon, Speedy Hen Ltd. and The Book Depository (and hopefully others soon). Follow this link to buy your copies (and The Beano Annual, which I believe is also out now):
http://www.amazon.co.uk/Dandy-Annual-2013-Annuals/dp/1845354877/ref=sr_1_1?ie=UTF8&qid=1342643880&sr=8-1

Today also saw the beginning of my new six-part strip in The Dandy weekly. The Dark Newt tells the saga of the Protector of the Pond and this week's issue features his origin. That's in The Dandy No.3590, on sale now! 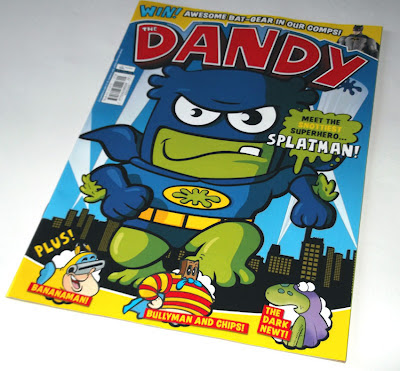 Unfortunately, last year's Dandy Annual turned up in the discount bookstores and pound shops. I've noticed the same with the Dennis annual a couple of years ago, and that ended up axed. Let's hope this year's Dandy Annual fares better. No sign of it in WHSmith or Waterstones yet, as you said, I wonder why that is? Are Egmont and Pedigree's annuals also already supposed to be out? If not, I suspect the shops will be waiting for their release dates and just putting them all out at the same time.

That is a lovely cover. Might not be able to wait until Xmas

@James I think that may be the case. A couple of years ago Waterstones in Birmingham told me they were waiting until later in the year to display them, even though Borders in the same city had them in stock in July. I think it's only Dandy and Beano Annuals that are out this early. Other ones are due August/September, so yes, some shops may be holding them back, defeating the object of the exercise.

That said, on this very day last year the 2012 annuals were in Smiths so keep looking! :)

Greedy Pigg was always one of my favourites - I might take a quick gander at the annual in Smith's to see what he's up to now.

Must say that the release is very early though - the kids won't have finished their Summer specials yet!

Unfortunately there are no summer specials anymore, except for a couple of Beano softback books that were published recently, reprinting old strips.

The weekly comics are glossier and more colourful than the summer specials used to be so that, plus falling sales of the specials, made them redundant.

it all looks great and nice to see old characters back..hope this will be an annually idea..

Lew, there's been three of those specials, titled The Ultimate Beano Summer Special. No.1 came out last year, No.2 in April this year, and No.3 last week.

That's what I meant when I said a couple were published recently. My local Smiths has nos 2 and 3 on sale together.

It looks great, I will have to buy it now rather than waiting until Christmas. So many of my old favourites have returned.

Oh! Thanks James (and Lew).
I had no idea that there was a third Beano Special out.
I'll have a trip into WH Smith's tomorrow and try and grab a copy.

Brings back great memories of buying all the Fleetway Annuals. I recall them being released during the summer and constantly plaguing my parents for them. By the time Xmas came round there were none left to buy (I was a spoilt git).

I was happy to wait until Christmas Day but I did go into Smiths every week to have a browse through some of the annuals. Although there were so many published back then it was only a quick look to see what appealed.

Why do I think that last years Dandy annual was supposed to be the last one. I am sure I was told that at my local Waterstones?

That sounds more like your local Waterstones deciding not to stock it again. I remember some newsagents used to say "They've stopped making them" about certain comics, when it really meant those shops had chosen not to stock them.

Well that certainly isn't a national decision, as the Dandy Annual 2013 can be found on the Waterstones website - although with no cover art, which is strange considering it's already on sale.

Yeah, I noticed the Beano summer specials were reprints. Wasn't entirely sure if they were worth a fiver either. I did buy #1 but put back #2 on the shelf in Smiths at the weekend. Didn't realise #3 was out too!

I just got this in Smiths two days ago and whoever did that awesome inside-cover picture of the editor's office, I want to shake his hand. (I thought that was a real 50s reprint until I suddenly realised "hey, that's Nuke Noodle about to bomb the Jocks & Geordies"...)

Loved seeing the modern updates of Smasher, Julius ("I want to go home now, Brutus" cracked me up), Katie and their mates, and the pretend-vintage stylings of Black Bob and Winker Watson. (If not for some very postmodern gags, I'd swear Winker was a repeat) It's a pity there weren't room for some of the more recent strips in there though.

The really weird thing is that Clott, Brassneck, and Keyhole Katie have been running in the Dandy recently and as completely different modern versions. They're a pretty versatile bunch.

Yes, that frontispiece is a great opener to the book. It was drawn by Wilbur Dawbarn, who does Mr.Meecher in the weekly.

The current Brassneck and Keyhole Kate strips in the weekly are reprints from a few years ago. It's good to see different interpretations of the characters though.