50 year Flashback: A hint of SMASH! 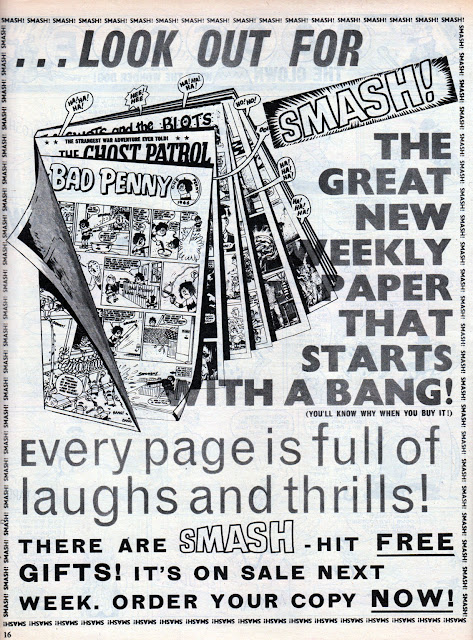 On this day in 1966, in the pages of Wham! No.85, lay the first glimpse at a brand new weekly. This was the first advertisement for Smash!, which made its debut a week later. I've shown you pages from that first issue here before of course, and it'll be time to celebrate it again next Monday, but for now here's that first preview of a great sixties comic!
Posted by Lew Stringer at 22:05

And we've already had a hint of Wham! in the Today magazine.
Perhaps we may one day see an in-house ad for Pow!?

I was sure I'd already shown the ad for Pow! No.1 but perhaps not. I'll rectify that soon.

personally.. I don't like how the text runs over the image.. makes it a bit harder to read.. Sure, it's only a W, a P, and another W which runs over, but I'm not keen on that.

Also I do like how people moan all comics come with free (mostly not free though) gifts when they kinda always did.. it was just the old ones were flatter at times.

Also interesting that Bad Penny seams to be the focus of the advert. Sure you can see Ghost Patrol and the Swats and the Blots are in there, but Bad penny gets the main focus

The designs of the Odhams house ads were often sloppy but that was part of their charm. It didn't matter when we were six anyway. The excitement of a new comic eclipsed any design flaws.

Free gifts were only in the first three issues, or used infrequently to give the comics a boost, slipped inside the comic. I think what annoys collectors today is that the gifts are plastic toys bagged with every issue. Then again, it seems to attract the readers they're aimed at, and that's the main thing.

I suppose it made sense to show Bad Penny as the main character. She was the most traditional, and they were trying to attract readers away from The Beano, etc. She did prove to be one of the most popular characters in Smash, along with The Swots and Blots.

part of the comment with free gifts was more towards people that seam to say "We never had or needed this gifts when I was a kid" which is wrong.. but yes.. too many comics seam to have every issue with a gift.. most new comics did have it for the first X number of issues. I always prefer gifts that DID tie in with the comic. a free pack of sweets more annoyed me then when it was a cheap plastic keyring featuring a character from the comic.

the old snappers/bangers/whatever you want to call them cardboard flick toys that went bang were fun and often cause they were cheap, did tie in with the comic. Tied in with Smash (and that cover was all about them. the one dinosaur comic I had years ago had one with a T-Rex on it so it was his 'roar' so again, it tied in with the theme. These toys are also more collectable.. though, and no offense to anyone, I think the collectables market has killed too many things.. every so often someone will bring out 1970s or 80s issues of UK comics or American, say about how much some old comics are worth, and then people will sell there year old beano's for 3 or 4 times the price.. well, I don't bother with many bootsales these days but you'll see it on online sales too.. something is deemed to be worth more so someone will try to sell it for more, and some rich person will buy it to keep a few years and then sell for even more..

okay.. too off topic now.. Bad Penny is a good choice. lasted some time and you just can't complain with a Baxendale character ^_^