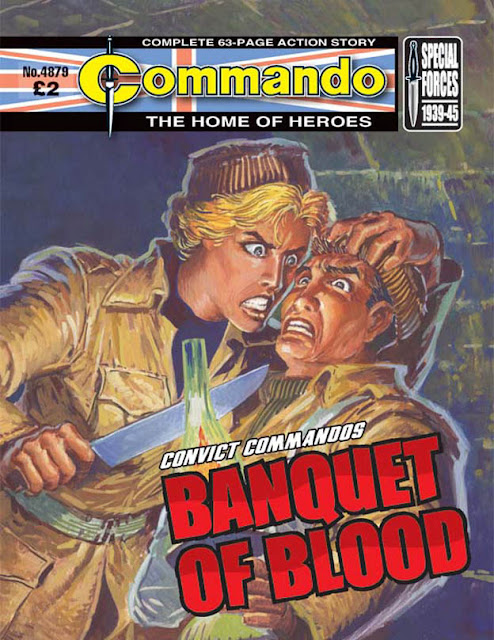 There's another stack of British comics out this week, including four issues of Commando. Here's the info directly from publishers D.C. Thomson...

Commando No 4879 – Banquet Of Blood
Budapest, 1945.
Why is Doctor Jane Mallory poised to attack her cowardly colleague, “Jelly” Jakes?
The answer is at the heart of the latest mission for the Convict Commandos. They must uncover a dangerous secret which turns normal soldiers into crazed, ravenous hordes capable of killing anything — or, indeed, anyone — who gets in the way of their desire to eat.
Is this the Commandos’ most terrifying adventure yet? Jelly definitely thinks so!
Story: Alan Hebden
Art: Manuel Benet
Cover: Manuel Benet
Preview: http://www.commandocomics.com/latest-issues/14th-january-2016-collection?issue=4879

Commando No 4880 – Showdown!
Everybody had thought a lot of Inspector Harry Andrews of the Malayan Police. He was a real man, all guts. Pity he had been captured and probably killed by the Japanese when the invasion over-ran his outpost. He’d put up quite a fight, though.
Then, there was his brother, Colin — just a war correspondent, not a fighting soldier. He’d never be half the man Harry was, they said. Even though he got himself on a desperate mission to the district in Malaya where his brother had disappeared…but they didn’t really know Colin Andrews…

Introduction
Our premier Gold Collection title of 2016 kicks things off in spectacular style, with a reassuringly gritty jungle tale. This book is brimming with action and intrigue which never lets up.
Spence’s script is expertly drawn by C.T. Rigby with his usual aplomb, while Lopez Espi’s cover is a masterclass in pulp illustration.
I hope you enjoy this story and are looking forward to many more like it throughout the year.
Scott Montgomery, Deputy Editor
Showdown!, originally Commando No 227 (September 1966)
Story: Spence
Art: C.T. Rigby
Cover: Lopez Espi
Preview: http://www.commandocomics.com/latest-issues/14th-january-2016-collection?issue=4880

Commando No 4881 – Death Drop
In 1944, Allied forces in Southern Italy met fierce resistance from the German defenders who fought bitterly from the cover of the mountains and hills.
When a British airborne unit were tasked with landing behind enemy lines and hampering the German escape, this seemed straightforward.
However, Captain Roy Hopkins soon found out the hard way that nothing ever went according to plan. He and his men would have to fight every step of the way if they were to complete their mission…
Story: Ferg Handley
Art: Keith Page
Cover: Keith Page
Preview: http://www.commandocomics.com/latest-issues/14th-january-2016-collection?issue=4881

Commando No 4882 – Another Tight Spot…
Andy Leslie had known all along that he would have to face danger when he volunteered to serve with the Parachute Regiment. That had turned out to be the way of it, Andy battling his way clear from one tight spot after another with the famous Red berets.
Nobody had ever warned him that he might end up in the sea, bobbing about in a dinghy. There was nothing predictable in any day of Andy’s war…

Introduction
Welcome to the premier Silver Collection issue of 2016.
This fast-paced tale of the continuing adventures of a Parachute Regiment soldier was drawn by the late Ricardo Garijo. Another Tight Spot was actually his first Commando book – the first of over 90 issues that he completed before his death in October 2009. His final book, The Winter Warriors (No 4257), was published posthumously in December of that year.
An exceptional talent, this influential and hugely popular Argentinian artist is much-missed to this day.
Scott Montgomery, Deputy Editor
Another Tight Spot…, originally Commando No 2469 (May 1991)
Story: Alan Hemus
Art: Garijo
Cover: Ian Kennedy
Preview: http://www.commandocomics.com/latest-issues/14th-january-2016-collection?issue=4882
Posted by Lew Stringer at 16:37

I must admit I love the Convict Commandos.