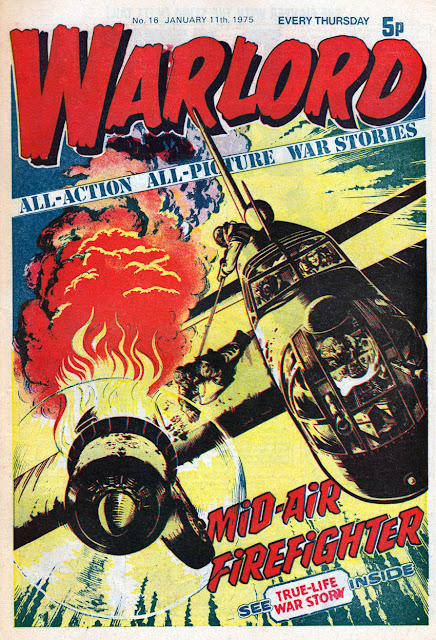 Unless they're bagged with a bundle of gifts obscuring the comic (as many today sadly are) the front cover of a publication is vitally important to attract attention. D.C. Thomson have always understood this, and have produced many striking full page illustrations over the years to grab the interest of readers. To my mind, this was even more evident in the 1970s, when Warlord debuted with a more dynamic attitude than its companion comics such as Victor or Hornet. 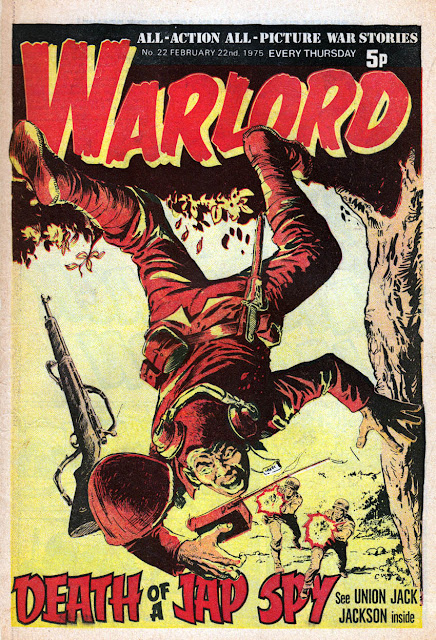 Warlord's more vibrant style was evident on its covers. Often only printed with variations of red and yellow (no doubt partly to cut costs) it gave them a fiery look that combined very effectively with the striking cover artwork and the direct tone of the excellent lettering. We often look to IPC's Battle, Action, and 2000AD as pioneers of the modern comic but Warlord got there first. Admittedly the content of those IPC titles was more street-cred and radical, but Warlord's melodramatic cover style and page layout started that new approach to comics of the seventies. 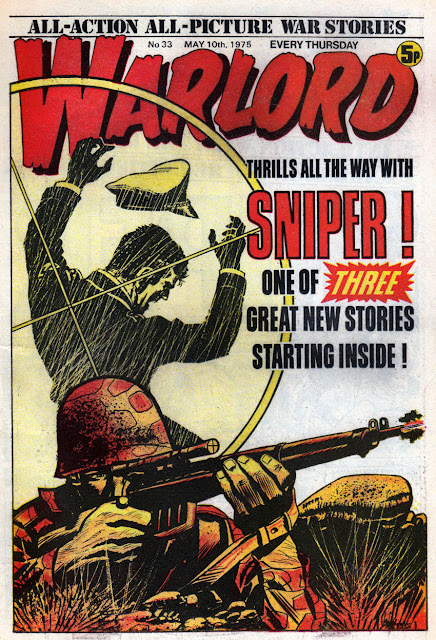 As well as influencing its rivals, Warlord also inspired a change in the comics that followed, with Bullet and Crunch also adopting the more dramatic cover style. Anyway, enough talk. Let the pictures tell the story with this small selection of D.C. Thomson covers scanned from my collection. 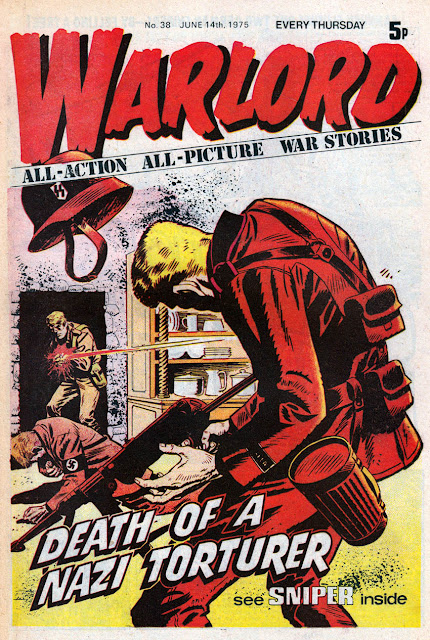 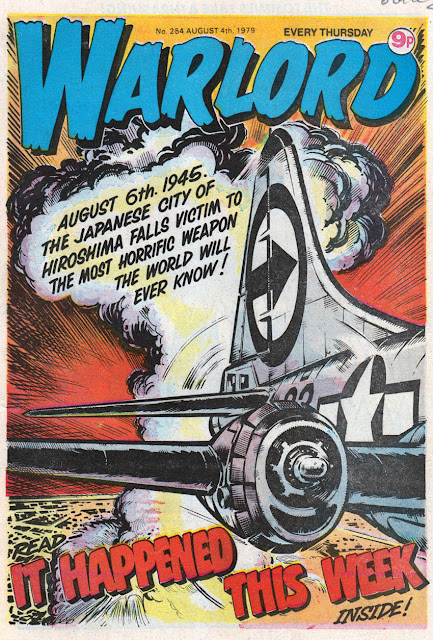 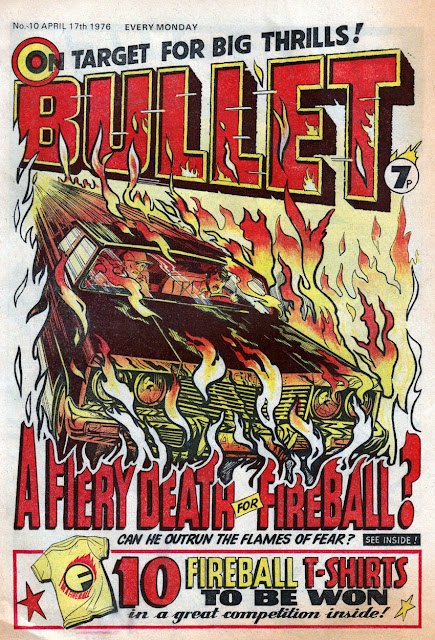 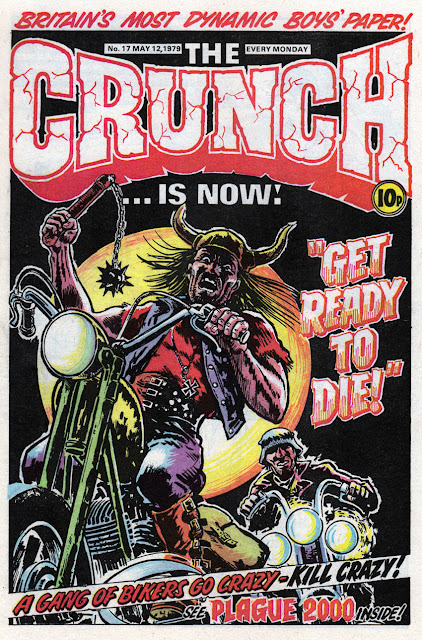 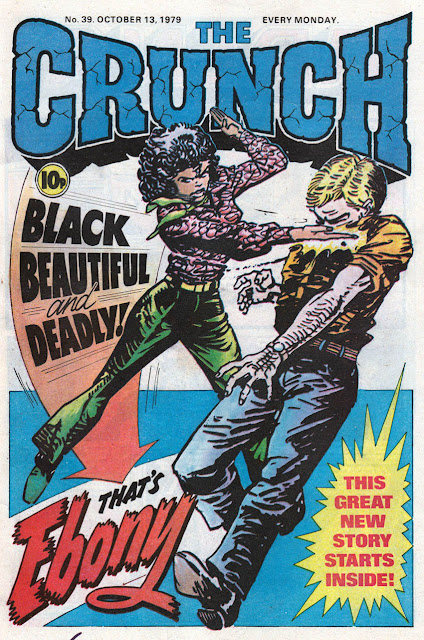 Email ThisBlogThis!Share to TwitterShare to FacebookShare to Pinterest
Labels: Bullet, The Crunch, Warlord

I am guilty of overlooking DCT adventure titles a bit, great cover selection, and the Crunch was a very good comic too! lots of Mike Dorey artwork.

I remember Warlord (I was between 6 and 10 at the time of the covers you show), but have no memory of Bullet or Crunch, and was collecting 2000ad at the time of those covers, so they would have been in the newsagent! Any previous articles on them anywhere?

Matt, click on the tag for The Crunch underneath the post and it'll take you to a post I did about issue 1 a year ago. There's also an old post about Bullet on my blog somewhere. Type Bullet into the search bar and you'll find it.

HC, I overlooked the Thomson adventure comics when I was younger too. They seemed too formal compared to Fleetway, and I hated war comics anyway. However, I bought a stack of them a year or so ago, including a complete run of Crunch. I liked the way they loosened up and became more dynamic in the mid to late 1970s/80s.

Carlos did freelance for DC Thomson (and I'll show some of his stuff soon) but that cover isn't by him.

A brave try but sad that they didn't last and the new boys eventually got merged into their more established sister publications.

Warlord lasted for 12 years which was a very successful achievement compared to many other titles.

Don't remember The Crunch at all.
Bought The Warlord for a few years, I even had a letter in it once.
Managed to pick up a dvd with the issue on it from eBay a couple of years back.

Cheers Lew, ended up looking at, and clicking on, the tags so found the article. It does look an interesting read, though as you say, perhaps not as dynamic as Fleetway.

Marvel UK, in a rare moment of following a trend rather than merrily doing its own thing, really aped the WARLORD/ BATTLE formula with the short-lived FURY. The new covers, and even the format, were very similar to its war-themed rivals even if the contents were tired imports from the US line.

It ran for 25 weeks during the Spring and Summer of 1977 before folding into the pages of THE MIGHTY WORLD OF MARVEL (so often a dumping ground for Marvel's failures).

Improbably, it was edited by a Pet Shop Boy.

That's right. I blogged about Fury a couple of years ago:
http://lewstringer.blogspot.co.uk/2014/05/neil-tennants-fury.html

Great selection of covers. Old as I am, I think they look cool and me aged 10 would have been blown away.
It's a shame there isn't any collections of Warlord strips around at the moment. I live in hope.

I think the market shrinks every year for WW2 themed strips I'm afraid. I've never been keen on them myself but it would be nice to see the work remembered. Same goes for any old UK strips really. Again, sadly, the potential audience shrinks with each generation. I think the only likelihood of it happening is through a licensed publisher, in the way that Hibernia and Bear Alley have produced books, with small print runs for the collector.

I used to love Bullet. I was a member of the Fireball club too. Hardly anyone seems to remember it, but it was a great comic.

I think perhaps some Thomson adventure comics are overlooked in favour of IPC because the IPC titles seemed more dynamic with the focus on the visuals. Thomson's approach was usually quieter and more story-led. However, the story structure of Thomson's comics seemed more sound and considered. If you read a run of IPC serials in one go the plots often contradict themselves and come across as each episode being written as they go along with no direction. (Then the conclusions seem rushed.) At least that's how it seemed before the new wave of Battle, Action, 2000AD.

I must admit I tended to ignore the Thomson adventure comics, but having bought a stack last year I now appreciate how well constructed the stories are.

My younger brother bought Bullet,while I bought Action.
Although Bullet seemed more "old fashioned",I still have fond
memories of Smasher,Werewolf,Solomen Knight and of course
Fireball.Ah, the summer of '76.

any idea who drew the cover for Bullet #6?

I don't have that issue, Dennis. Sorry.