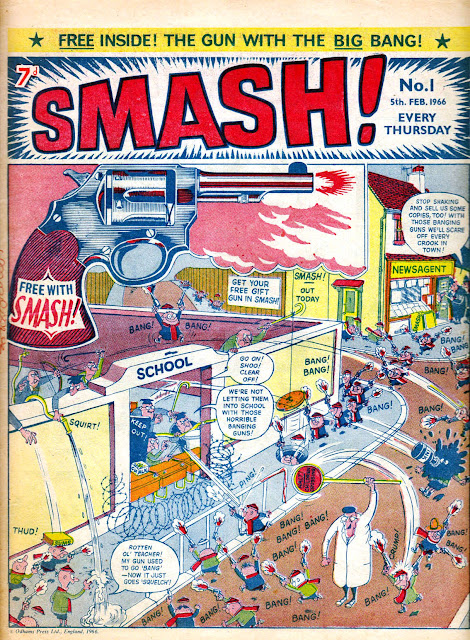 Half a Century ago this week Odhams Press launched the second title in what would soon collectively be known as their 'Power Comics' weeklies. I enjoyed all of them but Smash! was the clear winner for me, with its content being a great balance of humour, adventure, and Marvel reprint.

The Marvel material wouldn't actually begin until issue 16 (when The Hulk arrived) but the contents of issue 1 were still a great line up. Here's what Smash No.1 contained...

As you can see, Smash! had quite a collection of top artists of the day. As time went on, artists would be changed around or replaced but Smash! always had some quality people working on its pages. To correct a few myths: Leo Baxendale never drew The Swots and the Blots until 1969, the year he totally revamped the strip for the second series of Smash! published by IPC. Nor did he ever draw The Nervs, which was mainly by Graham Allen and later by Ken Reid.

Anyway, enough from me. Here's a selection of pages from that very first issue of 50 years ago. One of the best comics of the 1960s.... 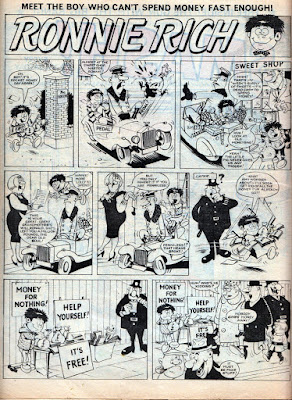 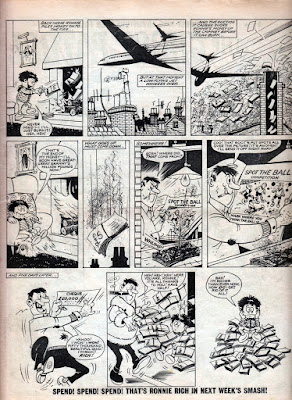 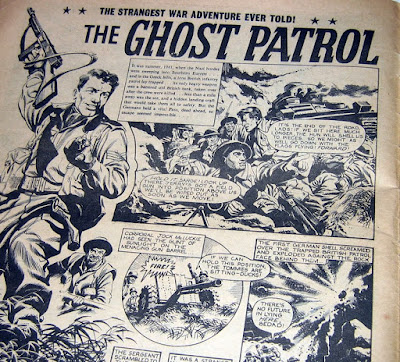 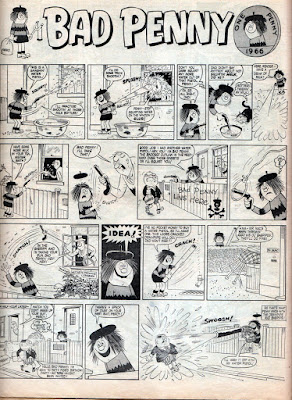 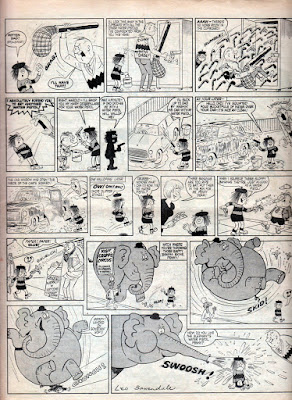 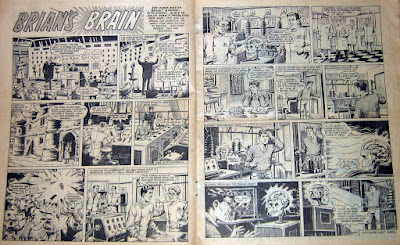 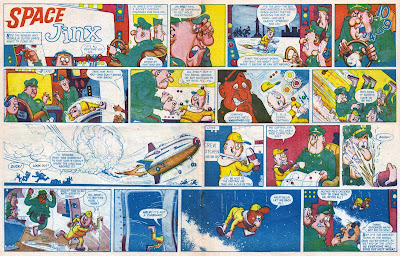 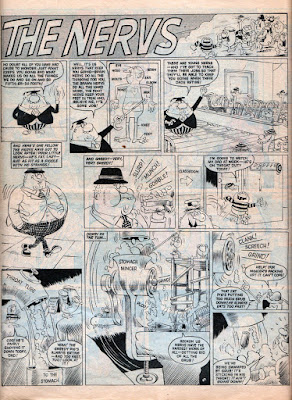 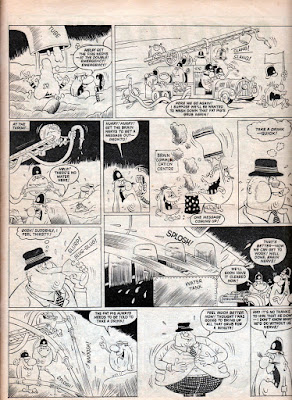 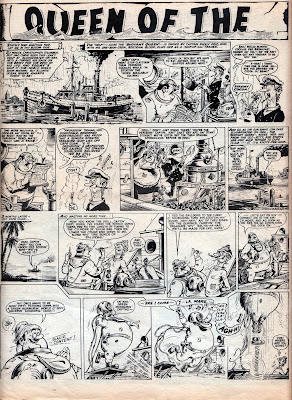 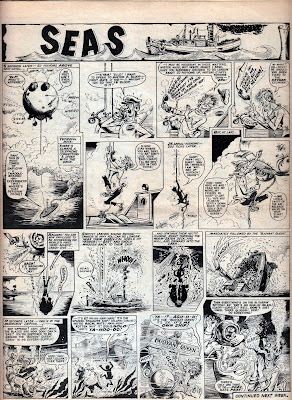 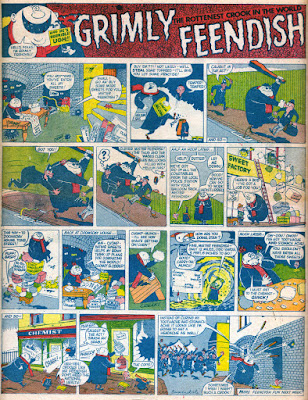 Finally, here's the house ad for Smash! No.1 that appeared in that week's issue of Wham! 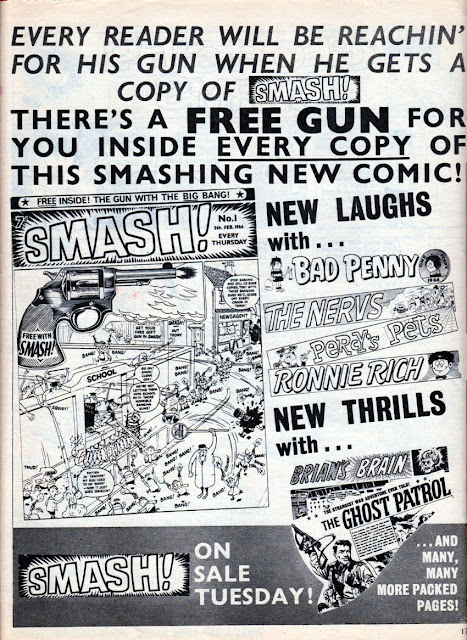 Interestingly, the idea of Space Jinx came from Ken Reid! He suggested it at his own initiative and even provided a finished introductory 2-page set in b/w. The reasons behind editorial decision not to use it and give illustrator’s duties to Brian Lewis are a mystery to me. But Odhams did send Ken his check for the work.

I never knew that. Thanks Irmantas! Have you seen his unpublished artwork for his version? Perhaps it might have run longer than the one they used.

No, I haven't seen it, unfortunately.

Although Ken was busy as it were drawing ‘Frankie Stein’ and ‘Jasper the Grasper’ for Wham! at the time, he threw quite a few story ideas at Odhams when they told him about their plans to launch yet another comic. In addition to ‘Space Jinx’, he came up with ‘Percy Pluvver Animal Luvver’, which eventually became ‘Percy’s Pets’ in Smash!, drawn by Brian Lewis, and ‘Davy Jones’ which Odhams rejected. IPC found the sketches in their archives nearly a decade later and asked Ken to draw two sets of ‘Davy Jones’ Locker’ that can be found in Buster Book of Spooky Stories 1976.

Fascinating! Thanks for the info. Percy's Pets had a good long run anyway. (Drawn by Stan McMurtry for the most part. I don't recall Brian Lewis drawing any but will have to check.)

My mistake re. Brian Lewis on Percy's Pets. It was mostly Stan McMurtry indeed, although 'The Index of the Power Comics' by Steve Holland says the artist was Cyril Price...

There's a few mistakes in that book unfortunately, such as crediting Leo Baxendale with some of Graham Allen's work. Cyril Price did draw Percy's Pets later, notably for annuals.

Fascinating to hear about Ken Reid's early involvement with Space Jinx. For what it's worth Brian Lewis was subsequently paid as scripter and artist. On Ghost/Phantom Patrol, it's not always easy to tell (and supposedly they did work together on occasion, but I'm pretty sure the series was drawn by Ron's brother Gerry.

You're quite right, Phil. I'd even credited Gerry in earlier posts about the strip. Thanks for the correction.

It was strange how Brian's Brain got dropped for ages quite early on before making a successful comeback.

I must admit I never liked the strip and presumably it wasn't popular with readers originally but I recall they had letters asking for its return after it was dropped. I felt the scripts often let it down.

Smash had the short lived but incredibly bizarre "Moon Madness" from issues 9 to 15 I think. Also had "The Legend Testers" whose first story (Climaxing in a Torture chamber) must have been right on the edge of permissible violence in any comic of that era. It also became the longest lasting of the Power comics and underwent a near total overhaul in March 1969-becoming a virtually different comic.

Yep, I've covered the changes to Smash on various past posts, Alan, along with Moon Madness: