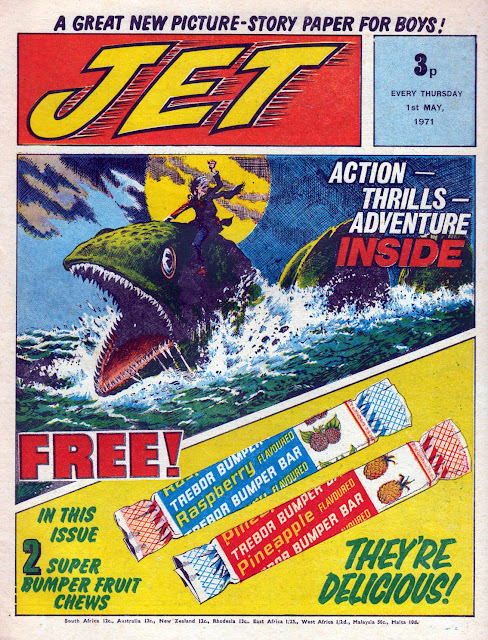 In the 1970s IPC Magazines were determined to become the dominant force in British comics and produced numerous titles to achieve that aim. Sadly, many were relatively unsuccessful and short-lived, such as the boys adventure weekly Jet which managed just 22 issues.

Launched at the end of April 1971, Jet is perhaps most memorable today for being the comic where Ken Reid's excellent Faceache strip began. However, it's arguable that the fantasy serial Von Hoffman's Invasion was another very notable strip. Here's the first episode, with great artwork by Eric Bradbury... 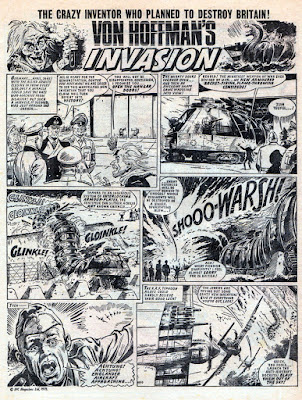 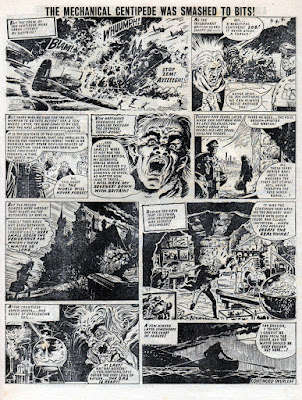 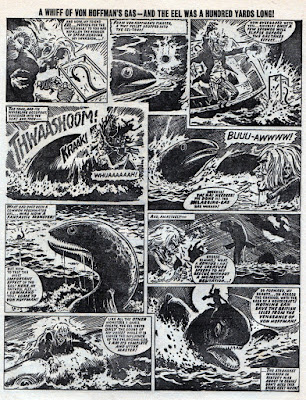 Jet's 40 pages were a good mixture of adventure and humour strips, with the emphasis on the former. The strips were fairly traditional fare for the time, featuring sport, war, and suchlike. Here's the first page of football strip The Sludgemouth Sloggers by Douglas Maxted, another IPC regular... 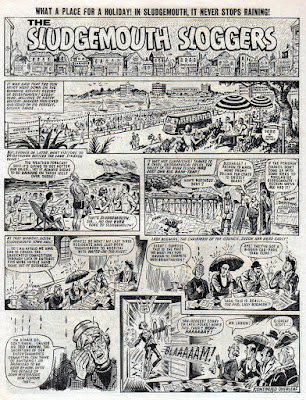 Partridge's Patch was a gentle detective story about a rural copper. Art on episode one by Mike Western... 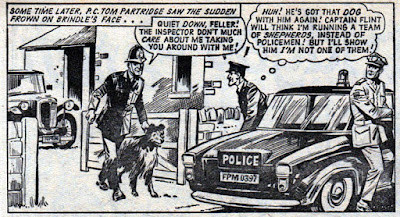 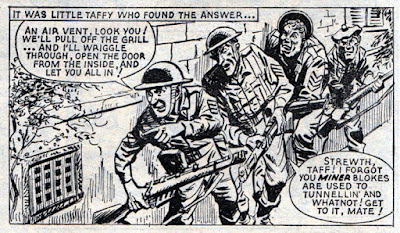 Paddy McGinty's Goat, taking its name from a song popularised by Val Doonican at the time, featured a shape-shifting alien who spent most of his time as a goat. Not IPC's finest hour... 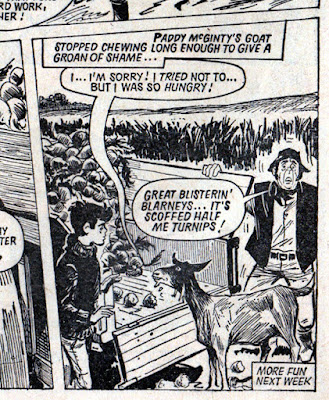 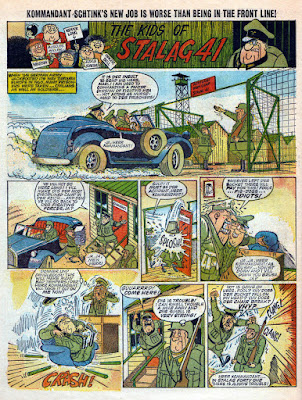 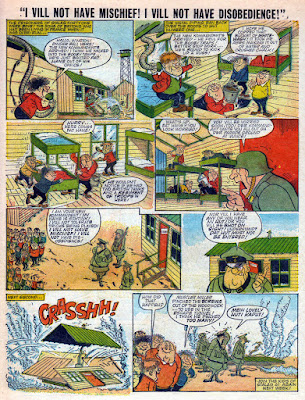 Crazy Car Capers was clearly inspired by the Hanna-Barbera cartoon Wacky Races that was on TV at the time. Artwork by Solano Lopez... 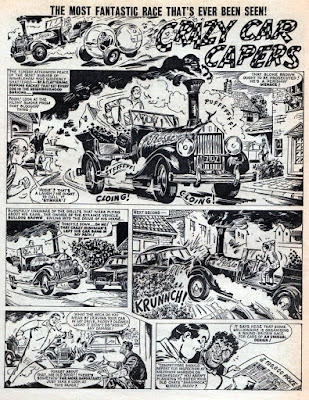 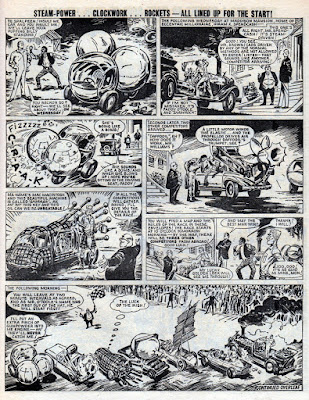 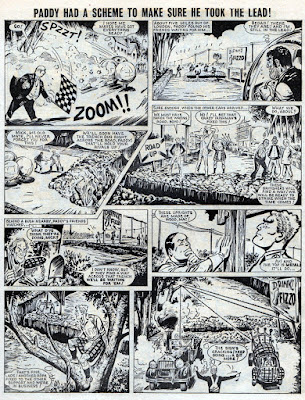 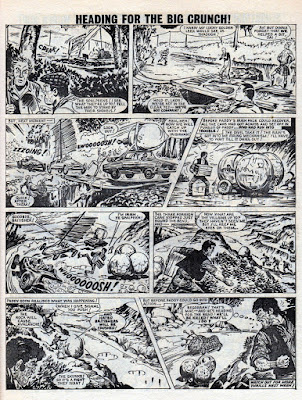 Ken Reid's Faceache was the strip that proved to have longevity, continuing into the merged Buster and Jet and remaining a favourite in Buster for many years afterwards. Here's the very first story from Jet No.1. It's evident the page was originally drawn for the narrower IPC size (like Cor!! and Tiger) or someone gave Ken the wrong dimensions. There's been some resizing by an art assistant for Jet's wider page format and it throws the composition off a bit but it's still classic stuff... 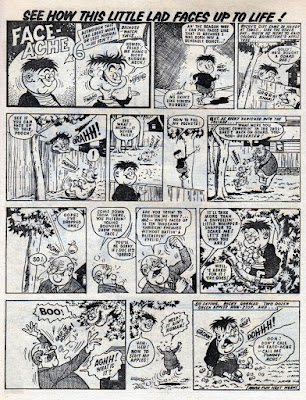 Bertie Bumpkin, by Terry Bave, was the other single page humour strip in Jet. Much of the humour came from Bertie's exaggerated accent and phrases, which were translated in footnotes... 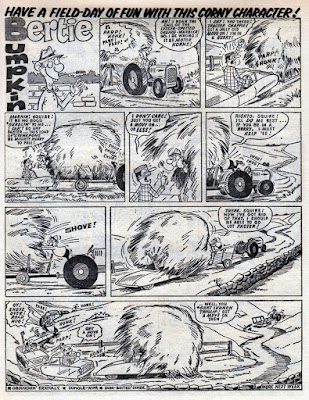 Bala the Briton was a rousing historical/mythological saga in the style of Jason and the Argonauts. I'm unsure of the artist on this. Here's page one of the first four page story... 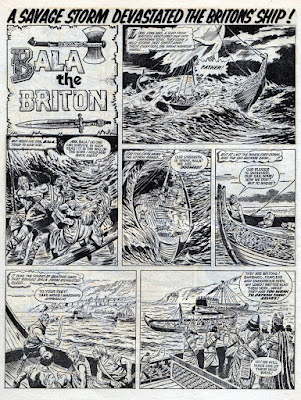 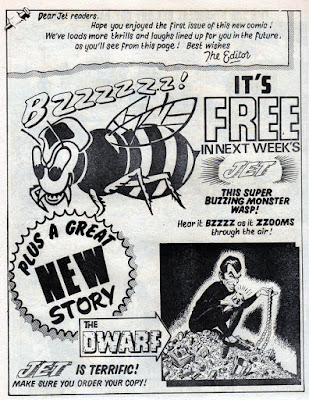 Personally, I never found Jet that inspiring. I had every issue, as I bought just about every new IPC comic back then, but I didn't keep them for long. (I recently purchased this issue again.) Obviously the intended readership didn't care too much for the comic, as it merged into Buster after 22 weeks. It always felt like a diluted version of Valiant to me, (as did Thunder, another short-lived IPC weekly). Apart from Tiger, and to an extent Scorcher, I felt that IPC never really got to grips with boys adventure comics in the 1970s until the new wave of Battle, Action, and 2000AD came along. It took editors with vision, Pat Mills and John Wagner, to bring IPC up to date to reflect a changing culture.

That said, I know Jet was appreciated by some, and despite any weaknesses in its scripts and direction it did contain some top class artwork. I hope you've enjoyed this glimpse through the the first issue.
Posted by Lew Stringer at 22:22

Great to see this one again Lew (after 45 years!) - Like you I wasn't that keen on Jet (although I did like Thunder) but I dropped it after about issue 3 (probably when the free gifts stopped). With the exception of of "Hoffman's Invasion" and Ken Reids brilliant "Faceache" the rest was err a bit too quirky for me. Still I can see why some folk might like it - do you know if "Jet" had an annual??

Yes, there was just one Jet Annual. I'll show some pages at a future date.

Great article, it got me thinking. Thunder, Tornado & Star Lord also finished after 22 issues. Is this just a coincidence or was there a reason behind it?

It may be coincidece but it is strange. I suppose 22 weeks covers the time they receive the low sales figures of the early issues and then the planning to end stories and merge the comics. Although I could be cynical and think that it was deliberate just to "hatch, match, and dispatch" with no intention of going past 22 weeks unless they proved successful.

Ah yes, that would make sense. Many thanks for the blog btw.

You're welcome. It's always good to hear from new readers!

I have collected most of the Jet at this stage and they are a disapointment, especially as they can be quiet expensive. It felt like an attempt to bridge the gap between Buster and Valiant. Thunder, while not brilliant was a much better attempt. IPC did not release a new Adventure comic after that until Battle.
The 22 issue thing, from what I can gather talking to IPC editors was simply down to sales figures.
It took a few weeks for sales figures to come in, and then wait for the first six issues sales to see if the sales dropped and how quickly.
A decision would then be made to merge with another title which took some time, so that decision would be made by around issue 14-16 of the new title.

Yes, Jet was a fairly weak comic. I stuck with it out of habit and perhaps because I knew it wouldn't last long, but it wasn't a patch on Valiant or the 'Power Comics' of the sixties.

It's interesting that they didn't launch another adventure title for four years until Thomson's Warlord shocked them into motion. I think there were some editors at IPC who didn't really understand comics and were probably hoping to move into upper management or over to Angler's Mail or Shoot! or something. Thank goodness for people like John Wagner and Pat Mills who came along to shake things up. (I liked John's revamp of Valiant but it was too late to save that comic.)

I loved Jet, probably I was just the right age, seven. I assumed everyone else liked it too, cancellation apart! I fully expected to read affectionate words about Paddy McGinty's Goat...

I've never forgotten Von Hoffman, the Dwarf, Bala and co, to me they're right up there with Adam Eterno, Captain Hurricane and the Spider.