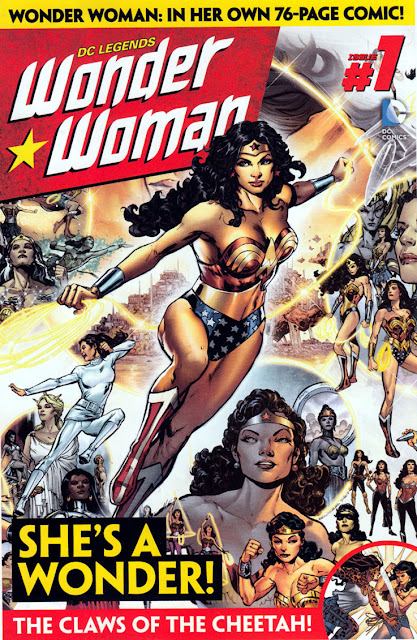 In her satin tights, fighting for our rights, Wonder Woman debuts in her own British comic on February 18th as Titan Comics continue to expand their line of titles reprinting contemporary DC comics.

Following the format pioneered by Panini UK for their Marvel reprint monthlies, Titan's 76 page title will feature three stories for £3.50. I must say, that's a striking cover and a great logo! 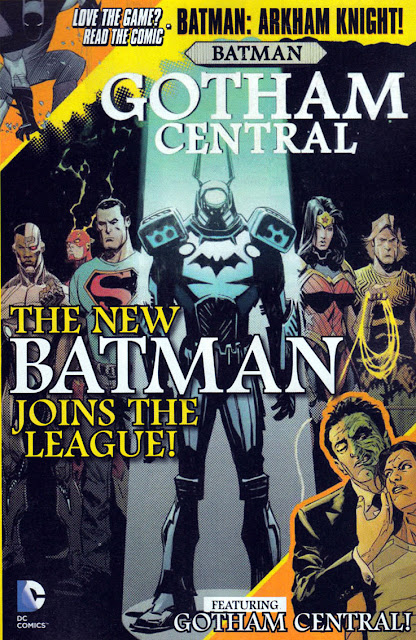 Another first issue next month is Batman: Gotham Central, which is basically a relaunched version of Titan's Batman Arkham under a new title, clearly intended to catch the attention of fans of the Gotham TV series currently airing on Channel 5. (Note: This may not be the final cover design.) Batman: Gotham Central No.1 arrives in newsagents on February 4th.
Posted by Lew Stringer at 22:52

Will be interesting to see which strips they choose to reprint.

Good to see there are now two female led books from Titan, alongside Supergirl.

It's going to contain reprints from Sensation Comics and Woner Woman from the last few years. It seems to be another fast track comic from Titan as they've only just started reprinting Wonder Woman in the back of their bimonthly Justice League comic.

The timing is certainly surprising. The market is already crowded with US reprint titles, so launching this off the back of the Wonder Woman movie next year would have made more sense.

I suppose Titan thought it would be good to launch it now because WW is in the Superman/Batman movie, but, yeah, 2017 might have made more sense. The other aspect is perhaps because Titan seemingly want to dominate that comics section. They now have more comics titles in that format than Panini, and, I don't know how they've pulled it off, but WH Smith in Birmingham's New Street Station has dropped all the Panini comics in favour of Titan's superhero titles. (Thankfully the main Smiths branch, just five minutes walk away, does stock Panini and Titan comics.)

Certainly a lot of DC reprint titles on the shelves now! Not saying that's a good or bad thing, but wondering how successful they will be. I question whether anyone other than Superman or Batman (or Justice League) can really sustain an ongoing title.

I think what helps Panini is the passion the editors have (having chatted to them at the Bristol Comic Con over the years). I often see different names editing the DC titles and I wonder if it's a steady, consistent hand.

I can't see the UK market sustaining 15 or so superhero comics, but who knows? I know what you mean. The Panini comics do feel more consistent. The editors are a great bunch.

Another reason why the timing is surprising - apparently DC are making some of the comics come out every two weeks instead of every month in the US. That's going to cause Titan to slip further behind (looking at the cover, Batman Gotham Central is printing an issue of Detective Comics from only three months ago, so they are almost caught up on that one, but that's not true for the non-Batman titles). So perhaps some of the existing titles - especially the ones that are only every two months such as Justice League - will end up increasing their frequency.

As for Panini, I'm surprised they don't get in on the act - there's no Guardians of the Galaxy title yet for some reason despite them having a successful movie (they've had a few issues reprinted in Essential X-Men though due to being a crossover). Wolverine and Deadpool will probably be retitled soon because they've almost reached the Death of Wolverine storyline, so that'll probably mean a new number 1.

The Guardians ran as a strip in Mighty World of Marvel for several months at the time of the movie's release, James.

I wish all these titles were back in the UK section of Previews.

But outside yourself I don't see much news about the new DC titles from Titan.

As I understand it, Diamond stopped distributing the Panini and Titan UK comics so that's why they're no longer in the catalogue. Comic shops still have them though, so they must have found another channel, probably using the same distributor as newsagents.

I promise I am not here to make digs at Titan (I *want* these titles to succeed), but Titan really need to update their sites better. This is another area where Panini is superior.

I mentioned the Wonder Woman title to someone who was interested. Thank goodness for Lew's blog entry because there was nothing on Titan's own site. Both their magazine and comic sections can be out-of-date. I've known issues on the shelves for 1-2 weeks whilst the websites have nothing.

I want Titan's DC titles to succeed (the last thing we need is that period, circa 1994 to 2003, where there were no UK DC comics on the shelves). They really need to buck up their ideas, though (sorry). They need a consistent hand on each of their titles, they need to market things better and need to ensure their website is fresh and up-to-date. I will support these titles by buying them, but Titan has to do something, too.

I just see a world of difference between the way Panini and Titan do business. Panini update their website regularly, they have had steady hands on each of their titles and they know how to market.

Good luck to them.

Titan usually send out press releases on the day of publication but I agree that more advance listings would be useful. I took it upon myself to scan that WW cover from the latest Doctor Who Comic. I sometimes wonder if I'm being too generous with my time to certain publishers who never show any gratitude but I think it's important to keep people informed that there are plenty of comics still out there.

Hi Lew. Are you being too generous? Perhaps, sir, but I am grateful.

It's not the same, but you may be familiar with WWE (once known as the WWF). They once had a competitor wrestling organization known as WCW. The WWF/WWE were kings at marketing, branding, advertising - whilst WCW didn't seem to know the meaning of the word. Whenever the WWF did a tour in the UK, they practically threw the advertising in your face; when WCW initially toured the UK, you often only found out too late. It showed the mindset between two companies.

It isn't the best comparison, I admit, but Panini practically shout from the rooftops about planned titles, new titles, etc.

Also, what about letters pages? Panini do get letters (or, to be or accurate, probably e-mails). Titan's comics rarely get them. Does that mean people don't e-mail Titan but do e-mail Panini?

I don't want to seem like I'm having digs at Titan for the sake of it (I want their superhero range to succeed). It's the little things, though. I sent an e-mail (tried twice) to the e-mail address advertised in their Green Arrow comic. It came back undeliverable whilst e-mails to other publications were fine. If they can't get the small things right - it was obviously an incorrect e-mail - how can they get the big things right?

It's likely that Titan struggle to get letters of comment. Panini certainly do, as they often put the call out for mail but have to replace letters pages with ads when not enough arrive.

Titan have increased the number of comics so fast that it's bound to cause some problems unfortunately. I agree that Panini seem more structured and plan out their titles well in advance. They've just announced that all the Collectors Editions will relaunch from new first issues after they've reprinted Secret Wars, even though that won't be for several months yet.