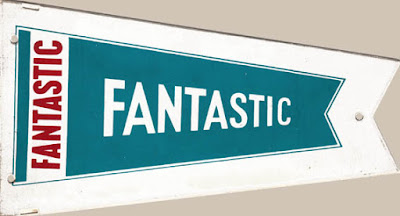 As I showed you pages from the first issue of Fantastic the other day for the comic's 50th anniversary I thought you might like to see what free gifts were given away during its run. Back then, free gifts in comics were a rare treat, so there weren't that many over Fantastic's 89 issues but here's what we got... 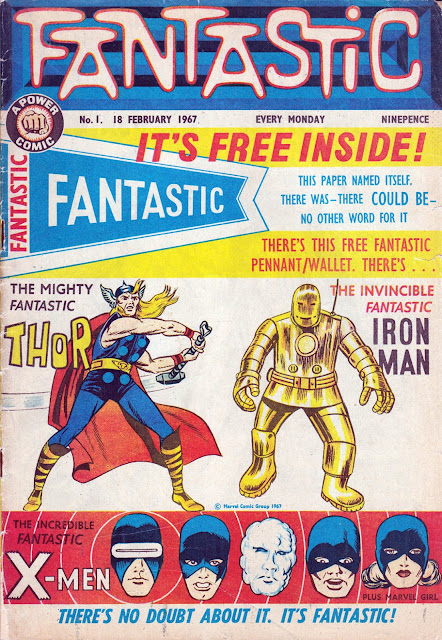 As I showed a few days ago, Fantastic No.1 gave us a free pennant/wallet. An unusual but interesting gift.

Inside the comic it explained what to do with it. I never had a bike, and we didn't have a car, so I used it as a pen case... 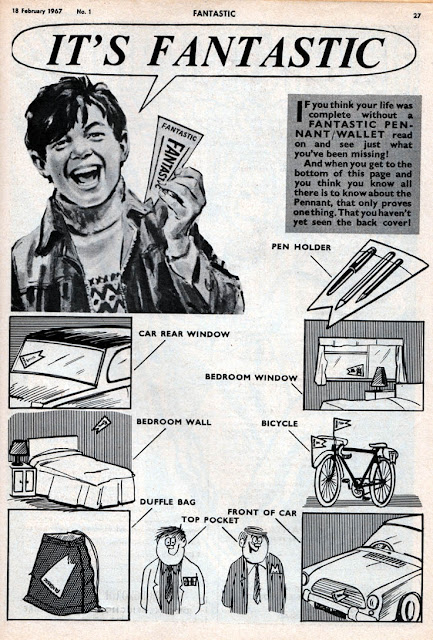 Images for the pennant were on the back cover for us to cut out... 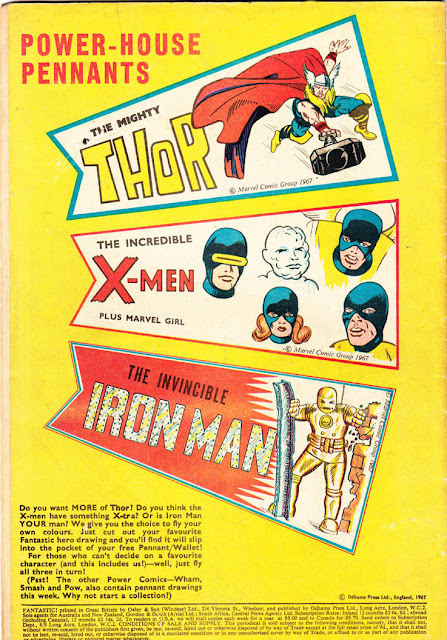 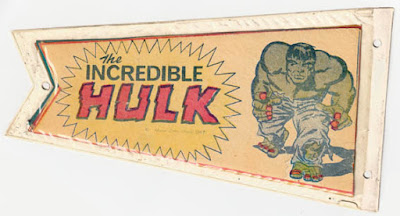 Fantastic No.2 gave us a set of stickers which were images of painted scars, plus an image of a 'cyclops eye'. My set are long gone, but you can see what they looked like from the cover... 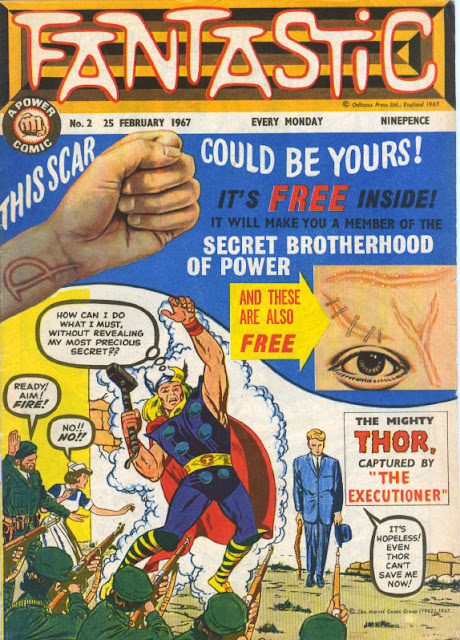 Strange as it may seem today, confectionery wasn't used as a free gift that often in the sixties. However, in Fantastic No.3 we had a free flat piece of bubble gum. Again, long gone, but you can see what the wrapper looked like from the cover image. I doubt it survived five minutes after I bought this issue. Yum! For me, that was the taste of the sixties! 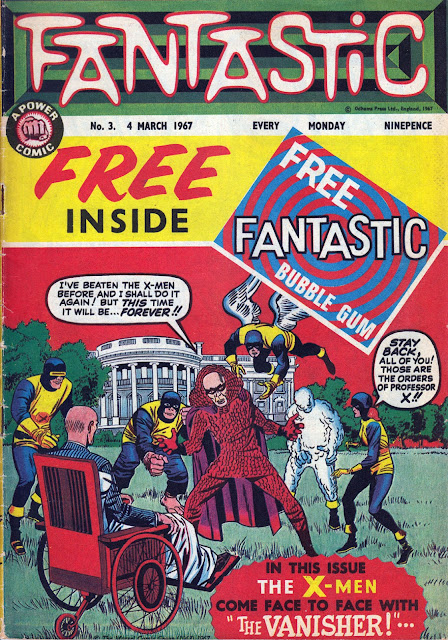 The next free gift wasn't until the first merged issue of Fantastic and Terrific in 1968, where we were presented with a free cardboard gun, flat card pellets, and targets.... 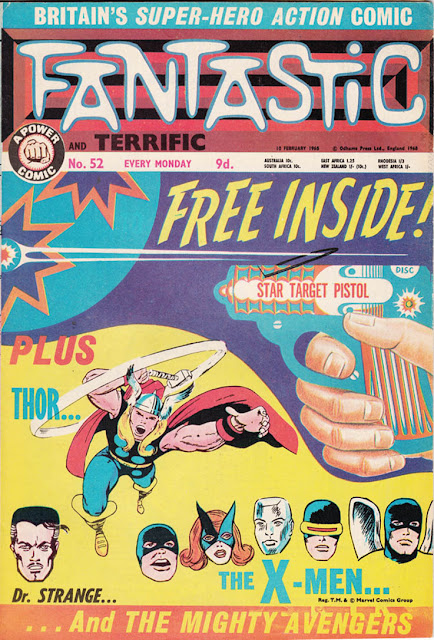 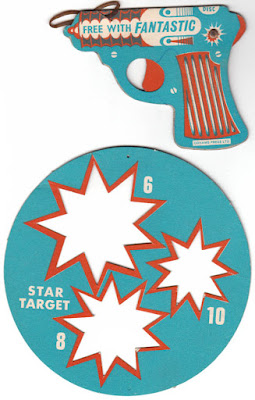 The week after gave us this interesting Apollo Moon Capsule. Again, just made of paper, but when assembled it showed us the details of the capsule in different layers. My thanks to Rob Hansen for sending me the image with the text on it. The rest of the images are of my gift. (You can see Rob's own blog here: 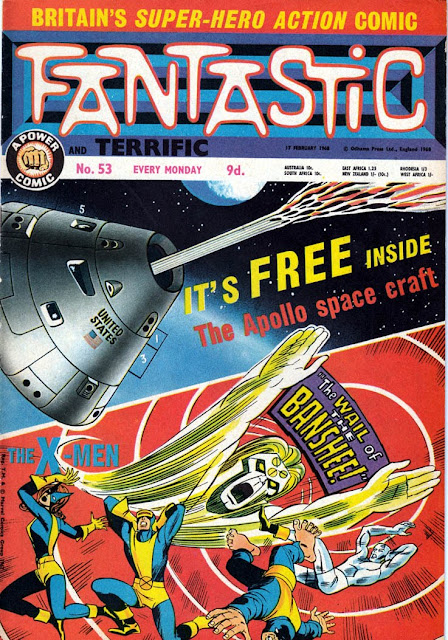 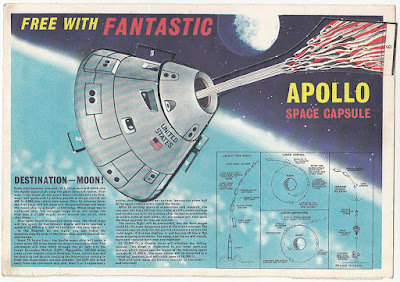 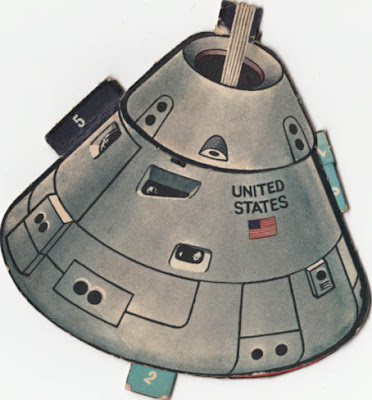 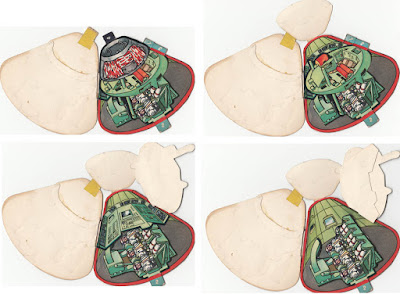 Finally, in Fantastic No.54 we had a free metal badge! This was my favourite I think. (Badges were great when you were 8.) It came with four superhero stickers you could interchange by sticking them over the badge. To be honest, they tended to rip after one use. Stickers are long gone, but I still have the badge. 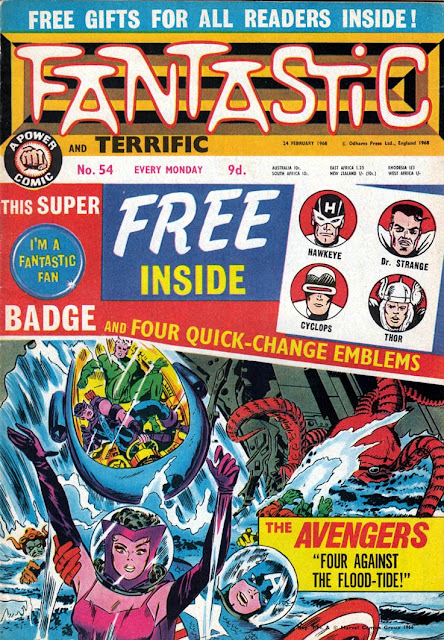 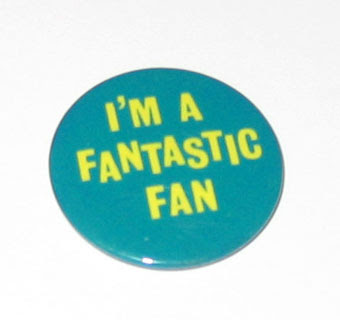 It's just occurred to me how often Odhams used turquoise as a colour on those Fantastic gifts. Strange. Ah well. Simple gifts, but they meant the world to us back then! Yes, we thought they were Fantastic!

And for many a year, I kept all the free gifts flat and unopened inside the comics. It was only when I handed my Power Comics down to my brother that they eventually came out. He got our Mother to iron the Iron Man transfer from Terrific #1 on to a T-shirt and unbeknown to us, she had kept hold of this little T-shirt, as he discovered it after we lost her, whilst going through her effects. He kept it and put it on his grandson!

Nice anecdote, John. Thanks for sharing it.

I have the badge....but had forgotten where it came from!

Ah, so maybe you were thinking the emphasis was one the fan, not on fantastic? Reminds me of the time I wore it at junior school. A lad looked at it and said "Huh! You think a lot of yourself don't you?". I explained it meant I was a fan of a comic called Fantastic, not that I thought I was fantastic!

Later issues had "The Fantastic Book of Soccer Stars". These were cut out and keep pages, so whilst not a free gift as such it still may be worth a mention.

True, but cut-out booklets were never free gifts, even though some regard them as being so. Pow! also had one. I might cover those as a new post later.

The Apollo diorama is one of those things I still wish I had. It fascinated me back in the day. I wonder what the modern equivalent would be? The comic lurks in a box upstairs.

I can't think of any modern equivalent that would stir such excitement and imagination as the Apollo diorama did for us, Simon. Even if a comic came up with something, a 3-D equivalent would exist on the Internet I guess.