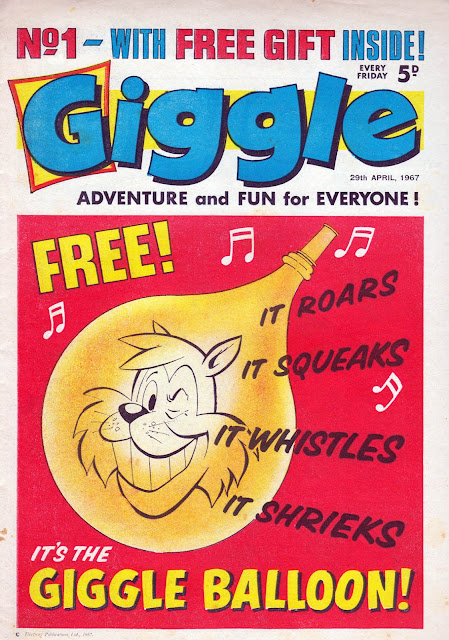 Those of us who were reading comics in the 1960s will remember all the classics; TV Century 21, Sparky, Wham!, Smash!, Pow!, Valiant... and then there was Giggle.

Giggle seems to be a comic that passed some of us by. I certainly wasn't aware of it back then, not until it had been merged into Buster for a few months. Giggle was published by Fleetway Publications Ltd and its first issue was dated 29th April 1967. Priced at 5d (2d cheaper than its Fleetway companion comics), it was evident that it was trying to directly compete with the D.C. Thomson comics. Even Giggle's logo, with the framed 'G' had similarities to the logo used by The Dandy at the time, and the character Giggle the Playful Cat (who soon became Giggle's cover star) was evidently trying to mimic the popularity of Dandy cover star Korky the Cat.  Despite some nice lively art, he was no Korky... 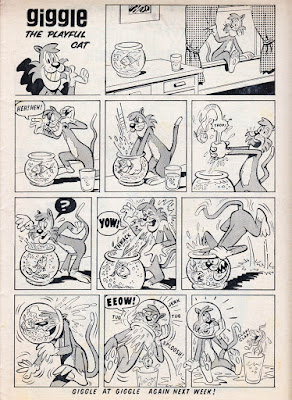 Unfortunately, the reason that Giggle isn't as well remembered as most other '60s comics might be because it wasn't very remarkable. Clearly having a lower budget than other comics, most of Giggle's content was either reprint from old UK comics or translated European reprint. I'm not sure of the sources of all the European strips but Buck Bingo was clearly Lucky Luke. His ever-present cigarette was erased from his lips for the UK reprint, turning it into an ever-present pout instead! 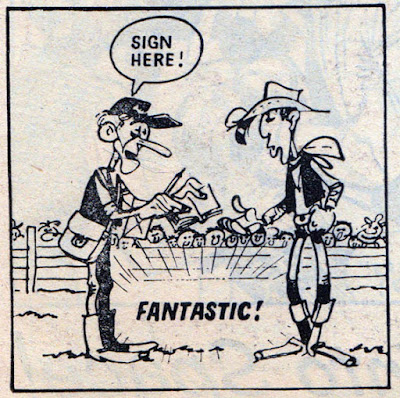 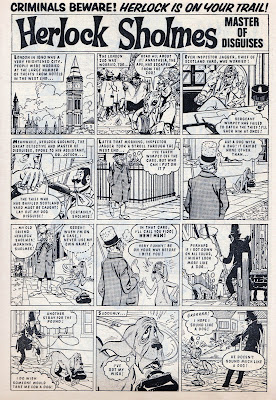 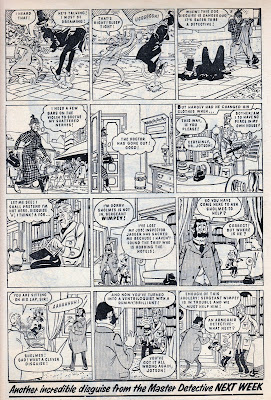 Dim Dan, The Film Stunt Man was evidently European, and drawn in a nice style but I can't quite place the artist. It looks Spanish to me. Can anyone provide more info? 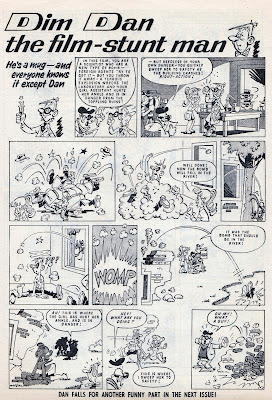 The reprints from old British comics included The Gremlins from Knockout retitled as The Chuckles (art by Fred Robinson I believe)... 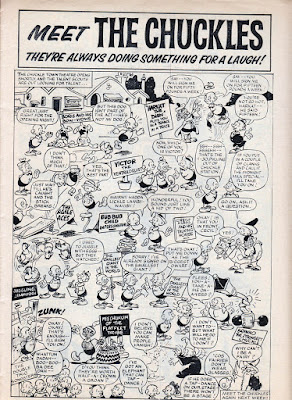 Niblo Nibbs by Eric Roberts, was originally from Film Fun (I have the original art for this page from when it was renamed Nippy Nibbs for a further reprint in Cor!!)... 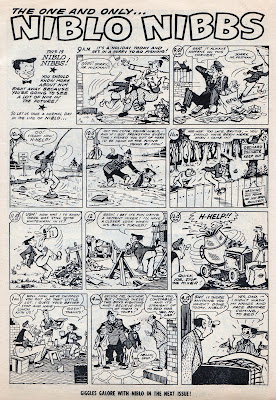 Castaways to Danger is a curious reprint from somewhere, but I don't know where. I'm guessing it may have originally appeared in a girls' weekly. Furthermore, I think the art has been altered to change the gender of the native who steals the necklace from a girl to a boy, perhaps to appeal more to Giggle's mixed readership. Can anyone confirm this? 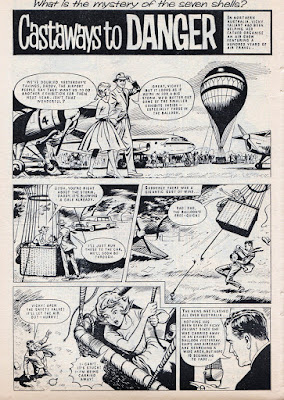 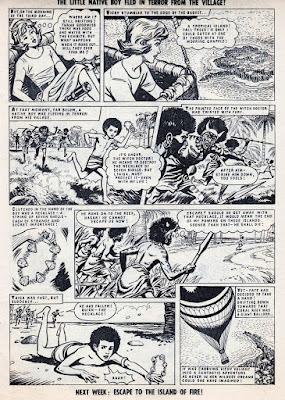 I think a few of Giggle's strips were brand new. I don't know who drew The Wild Bunch but I'm positive it's written by Roy Davis, a prolific Fleetway/Odhams scriptwriter. As Roy was also a cartoonist he used to supply his "scripts" as rough penciled comic pages. He wrote many of The Vampire Brats stories I drew for Buster and I recognise the distinctive rhythm of his storytelling and style of dialogue in this page... 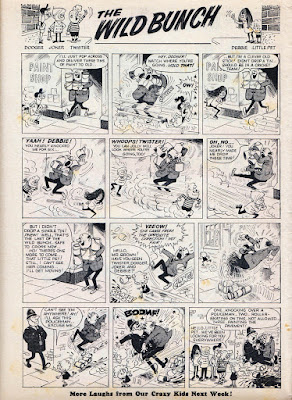 I think The Space Travellers was new too. The art looks a bit like Mike White's work but I don't think it is by him. 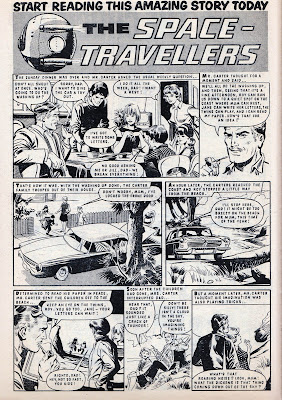 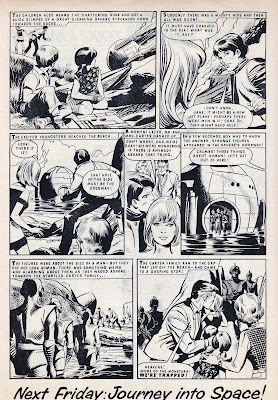 Helpful Hettie is either brand new or a reprint from a girls' comic. The art is definitely by Reg Parlett... 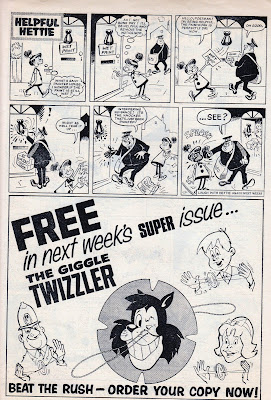 Giggle lasted for just 38 weeks before merging into Buster, so it wasn't a success by any means. Why did it fail? There was an increasingly crowded market for comics in the mid-sixties and inevitably not all could survive. Perhaps the mixture of European content and old-fashioned looking UK reprints didn't help, and the fact that, compared to its colourful rivals at D.C. Thomson, Giggle looked very dull with 28 pages and only the front cover in colour. I'm only judging it by my perspective as an adult, as I never read it 50 years ago, but it seemed to lack the excitement and polish of its companion comics such as Valiant and Buster. For a comic calling itself Giggle it simply wasn't a great deal of fun.
Posted by Lew Stringer at 20:05

Giggle, what I know about it, was very interesting in the wide range of world wide cartoonists. As well as old British, it got Yugoslavian, Spanish, Belgium, Argentinian and French. (and still no Pierre Seron ¬_¬.. I really need to improve my very basic just about passed grade French).. of course, a good question is just how much was translation and how much was just 'lets think of new text to match these pages'.

the Castaways to Danger doesn't look like an English Artist, but there were a lot of Spanish ones working in British comics at the time.. of course (and more so these days) there are many an English artist drawing in the style of a non-English artist.. so it can be tricky.. Though why do I think "Girl" might be a good place to look for it.. there don't seam to be many archives for the girl comics though.. but then, Giggle was by Fleetway.... Girl library was IPC at the time I believe..

Fleetway and IPC were the same company. "IPC Magazines" started appearing as the company name in 1969 on the comics. Here's the history:
http://www.referenceforbusiness.com/history2/4/IPC-Magazines-Limited.html

Giggle also featued Peyo's "Benoit Brisefer" as "Tammy Tuff", where some poor soul had to draw a pompom on Benoit's beret in every frame.
Internet says "Dim Dan" was by Reg Parlett, but gives dates later on in Buster...

Yes, I didn't bother showing any Tammy Tuff. (Can't show every page of a comic due to verbal agreement with IPC.)
Reg Parlett's Dim Dan was a later version.

No worries, Manic. It's a complicated history of the company.

Another great post Lew! I don't have a copy of Giggle #1 myself, but one interesting thing about The Space Travellers is that it appears to be a redrawn version of the 1950s Knockout strip Space-Family Rollinson. Like you I was reminded of Mike White by the new artwork, though it's hard to be sure.

Cruncher 'the tiny termite with the big appetite', was one of the home-made strips by Frank McDiarmid. I also like Captain Swoop 'Half Man, Half Bird, Half Wit'. Both transferred to Buster after it absorbed Giggle. Buster index says that Captain Swoop was a reprint from France.
In general, I get an impression that Giggle is quite hard to come by. I have seen first issues on eBay on quite a few occasions but finding later numbers is quite a challenge. I still need 6 to complete my set.

I don't remember ever seeing Giggle in 1967, the first I knew of it was when it appeared on the masthead of Buster! Maybe it wasn't even distributed everywhere.

Good point, Nigel. I think distribution could be lacking on some comics though, even back then. I had Pow, Fantastic, and Terrific reserved at the newsagent, but not Smash or The Dandy, so perhaps some were harder to come by in some areas. I don't recall any TV ads for Giggle though so maybe it was deliberately low key.

Cruncher wasn't in issue 1, Irmantas. He came later. Yes, I was surprised to see Giggle on eBay. It was in an auction as a job lot with first issues of two other comics, and didn't actually cost that much, surprisingly.

I actually do remember buying "Giggle" but my memory of most of the comic is pretty much limited to the cat on the cover (Giggle) who I thought was really well drawn as a kid. I do seem to recall "Cruncher" so perhaps thats why I remmebr the comic as "Cruncher" was a favourite of mine when I was a kid.

The most interesting thing for me here is seeing Herlock Sholmes as I didn't realise how old it was. I remember many years ago now preordering a collection of HS strips that was to be published by Print Media, the publishers of Strip magazine. It never appeared of course.

You're right, Reuben. I knew I'd heard of Herlock Sholmes before. I'd forgotten it was scheduled for a modern day collection! I'm not sure if that style would have engaged British kids that much but we'll never know now.

Hey Lew, The Space Travellers is by Leonne Frollo who worked for D'ami. I have a page of this and it is the only one I have ever seen (in the UK anyway). Believe he may have done Space Family Rollinson for DCT for a while when working for the V.V. agency at the time and a few other things for DCT besides.

You're wrong - chuckle. Giggles ran for 42 issues.
I saw a Vampire Brats strip and was actually impressed with the writing (not the artwork). No wonder! It was written by Roy Davis!

Nope, it ran for 38 weeks, Steve, and as the cover clearly shows it was called Giggle (singular).

As for the rest of your spiteful silly comment, seems odd considering that years ago you called me "brilliant" and begged me to put a good word in for you on Buster. Pity I wasted my time doing that.