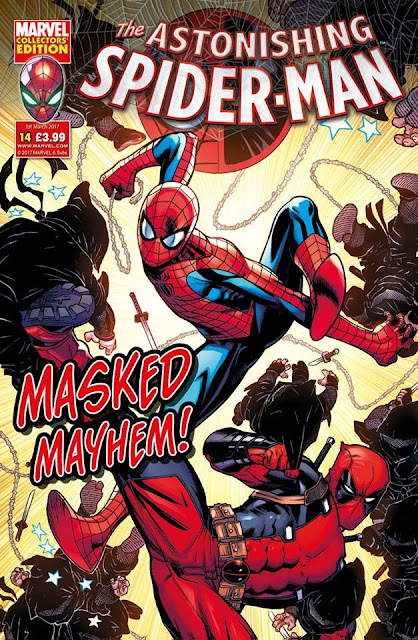 From his debut in 1962, Spider-Man has proven to be Marvel's most popular character. That goes for the UK too, ever since his appearance in British weekly Pow! in 1967.

The modern-day home for Spidey strips in the UK is The Astonishing Spider-Man which has been running for over 20 years. It's published fortnightly and has 76 pages for just £3.99. A great bargain!

Here's the contents of the current issue...

Email ThisBlogThis!Share to TwitterShare to FacebookShare to Pinterest
Labels: Spider-Man

Why are they still calling Miles "Ultimate Spider-Man"? The American solicits never do that now that he's moved to Earth-616.

It's just to distinguish him from the more established Spider-Man as they're in the same comic in the UK.

I remember buying a Spidey reprint (#666) in the 80s. Can't recall the exact name of the title.

I drifted away from superhero reprints in the late 80s/early 90s, but I remember THE COMPLETE SPIDER-MAN (1992, perhaps?) which morphed into THE EXPLOITS OF SPIDER-MAN.

As for ASTONISHING SPIDER-MAN, wow. I wish the market, and my wallet, could support a second Spidey CE. With various Spider-characters, one-shots and classic tales, one UK Spidey title seems not enough.

On an unrelated note, I wish Titan would have the consistency that Panini has (with scheduling, numbering, informing readers of changes, etc.).

I'm not sure a second Spidey comic is necessary really. As Astonishing is fortnightly it manages to reprint most of the American titles by changing the content around every few months. Of course, that might change now that Spectacular Spider-Man and Scarlet Spider are being added to the schedules.

Yes, I'm afraid I've given up on Titan's DC comics for the reasons you mention. And my local Smiths still insists there isn't a Batman comic! (They must have accidentally deleted it from their ordering system but won't admit that.) To be honest, most of DC's Rebirth output seems to me to be treading water until they do the ill-judged Watchmen tie-in so I've lost interest in the company.

Renew Your Vows, Scarlet Spider and Spectacular Spider-Man's additions to the line are counteracted by the demise of Spider-Woman (next month), Silk (seems to be ending in April), Spidey, Web Warriors (those two are already over), and I think 2099 will also be gone shortly (low sales according to the charts on Comichron). So they're not going to have any more content to squeeze in a year from now than they do presently.

WHSmiths have told me the same about Batman. I can't subscribe as it's a communal mailbox where I live and there have been many instances where my parcels have gone missing - or gone elsewhere. So I have to buy from stores.

I did try ordering individual issues of Batman on Titan's site a few months back - but when I found the specific issues, I clicked on them and was directed to "page not found..." I really give up with Titan. Compared to previous UK reprint publishers, such as LEM and Fleetway, Titan are doing a poor job at communicating and informing readers.

My worst moment was when the Supergirl comic just stopped. Months later, Titan, on FB, told me they'd informed subscribers but can't inform all readers. Can't inform all readers? Really? Not heard of social media, websites or editorials in other titles, then? I lost goodwill when they then told a lie (I thought it was a lie) and claimed Supergirl had only been a mini-series. Just be honest. Why subscribe and invite letters if it was a mini-series? Wasn't advertised as one as far as I know.

It's part of a wider problem. Sounds like Titan's DC titles are an afterthought - and they often provide incorrect "next issue dates" or reprint errors. Really does look amateurish compared to Panini's Marvel licence.

And on a final note pertaining to Titan, look at their FB feed: almost all the visitor posts are complaints about not finding titles, not getting the Batman title in Smiths, missing subscription issues, etc. I wish they'd get their act together.

Ending on a positive note, right now is a good time to be a Spidey fan, in my view. So much happening!

Yep, I tend to agree with you there, Stephen. I still think Titan do some great comics for the direct market though, and full of original material. It's their DC reprints where they fall down.