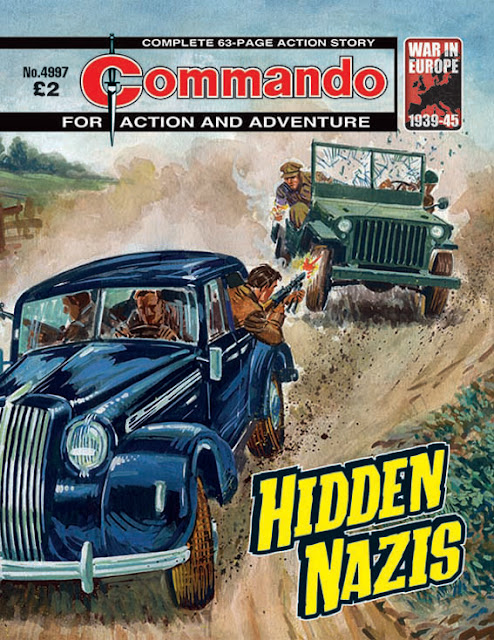 Thanks to D.C. Thomson for the latest info on the four issue of Commando that will be in shops this week...

Commando – 4995 – The Village
By spring, 1945, the Reich’s forces were in full retreat and Allied troops were pushing into Germany. So when Sergeant Matt Geary and his small squadron moved into the small village of Langhirten, he wasn’t expecting much resistance.
They took the village from the S.S. battalion easily and they repelled the German’s counterattack with little issue. But after the S.S.’s third attempt to seize back the village, Matt became suspicious. Langhirten had no strategic value and the Germans were supposed to be retreating… So what was so important about Langhirten?
What secrets were hidden in… The Village?

Commando – 4996 – Hurricane!
Imagine a Russian squadron whose ancient biplanes have been swept out of the sky by speedy Me 109s. They’re thirsting for revenge.
Then comes along Kirk Roland with a trainload of superfast Hurricanes, ready to risk his life in teaching the Russian pilots how to hit back hard. You’d have thought they would welcome him with open arms!
But they didn’t. They hated Kirk, and his planes, from the moment he arrived.

Introduction -
Prepare for take-off with another high-flying adventure from the Commando archives! Newark explores the winning, but often tense, relationship between Britain’s R.A.F. pilots and Soviet Russia’s air force in this tale of team work. Steeped in history, Newark celebrates the collaboration between the allies, but also confronts the differing opinions held during this time. It is particularly interesting to see Soviet Russia’s female pilots (the first women pilots in the world to be allowed to fly combat missions) being represented and well-respected in this issue.
Accompanied by Repetto’s astonishing artwork, Hurricane! is a fast-paced air adventure, worthy of another outing.

Commando - 4997 – Hidden Nazis
In 1945, after the German surrender, Nazis guilty of heinous war crimes attempted to flee or conceal themselves in post-war Germany. Lieutenant Sam Watling’s job was to find them.
But he had help. An unknown hand aided Sam in his quest for justice, unmarked envelopes and tips were left at his desk – behind them a secret informant.
Someone was helping Sam catch Hidden Nazis.

Commando - 4998 – Jailbreak Heroes
Three men on the run – but running into danger instead of away from it. For when ex-Sergeant Mike Stone got the chance to escape from Polworth Military Prison in England, he decided to head back to the front line in France to seek revenge on the cowardly officer who had betrayed him.
And the honest ex-Sergeant was surprised to find how glad he was when two other jailbirds, Alf Barstow and Lefty Briggs, insisted on tagging along too…

Introduction -
Nothing propels a storyline better than a personal vendetta. Forlorn and bitter, Mike Stone is desperate to clear his name after being falsely imprisoned for cowardice and striking an officer. The urgency of Veteran writer, Alan Hebden’s plot is coupled perfectly with Keith Shone’s masterful interior art.
Ian Kennedy shines once again and provides a dynamic cover illustration which does its job splendidly, framing the tone of the action contained within this Commando’s pages.

"Hurricane" sounds right up my street. Would it be churlish to mention Johnny Red at this point?

It's a press release, you pillock.