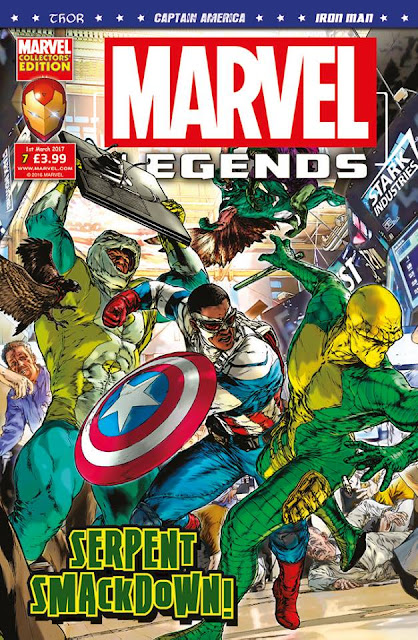 However, it's not all about nostalgia. Like its companion comics in the Marvel Collectors' Edition range, Marvel Legends appeals to modern readers too. Now that Panini's reprint comics are only a year behind the U.S. Marvels, it's a great economical way to read these stories.

Here's the info on the latest issue, out today, on sale in WH Smith and selected newsagents...

http://www.paninicomics.co.uk/web/guest/home
Posted by Lew Stringer at 15:37

It's a tenuous link between Fantastic and this comic. Fantastic reprinted classic old stories by the masters from the sixties. This looks like it only reprints modern comics.

Those classics WERE modern in the 1960s when Fantastic reprinted them! If Fantastic had survived to today, it'd be reprinting the same stories that Marvel Legends does.

After loads of spamming and some trolling, anonymous comments are now disabled.

Panini should be applauded for keeping the Marvel franchise going in Britain and Europe. It's so important that we still have comics for all ages in our newsagents. Now if they could only restart the UK-originated content again...

They'd do it tomorrow if they could, Will. Sadly, Disney won't allow it now. Very shortsighted, I think.

I feel sympathy for editor Brady Webb, though. It used to be so simple: Cap, Iron Man and Thor probably only had one US title, making reprints easier. Now, in the US, there are - what? - two Iron Man titles, two Thor titles, two Cap titles. Must be tough for Brady to decide what to reprint.

In his position, I'd be wondering, do I reprint the "Doctor Doom as Iron Man" US title or the Iron Man title featuring young Riri Williams? Do I reprint Jane Foster's Thor or Unworthy Thor? Do I reprint Steve Rogers' Cap or Sam Wilson's Cap? If only we had two issues of Marvel Legends a month, it could be so much easy. ;-)

Brady does a good job, as does Scott Gray, but I don't envy a guy who has so much material to choose from.

You're right, Stephen, the additional series do present a problem. I've no idea which ones Brady will choose. The Steve Rogers series is essential to upcoming Marvel stories so that will probably be used. Unworthy Thor is only five issues, so I guess that could be used for five months but then it'd put the other Thor series back a bit. Yes, ideally, a fortnightly schedule would be good but I don't think sales justify it at the moment.

Personally, I'd put one of the Iron Man series in MWOM (replacing Ms.Marvel for a while), whilst retaining the other in Marvel Legends, and one of the Cap series in Avengers Universe, but there may be practical reasons why that wouldn't work.

I've been buying Steve Rogers as Captain America, but I'm a long time fan. What they're doing now with his character - which looks like a full year's storyline, and which is apparently not discussed in most other titles (ur'f orra phor-jnecrq gb znxr uvz n yvsrybat ntrag bs ulqen) -makes it a "not Captain America" story from the point of view of casual readers.

Sam Wilson on the other hand gets the public racial prejudice which is just copied from the recipe for "X-Men". :-) It's a new-ish direction for the Cap franchise but I am not entertained by that element. He doesn't seem to be winning the public over - not inside panel borders anyway.

As for antique material in these titles - we've had some very early Dr. Strange and Incredible Hulk stories in the appropriate titles. Adult readers have almost certainly seen these before - Nightmare, The Toad Men, etc. But it's nice to see them again. Well, presumably the shorter 1960s adventures of Steve Rogers are in the archive, and there's "Tales of Asgard" which could come out yet again.

The Steve Rogers storyline will soon have an impact on the other Marvel titles once 'Secret Empire' begins, so it's probably essential to keep that in Marvel Legends. (If you haven't yet seen it, I'd suggest picking up Civil War 2: The Oath, a one-off epilogue to Civil War 2 which is a vital part of this Steve Rogers story arc.)

As for the classic back-ups, they're just really fillers to pad out the comics, much as I'd like to see more of them. Marvel Legends tends to pad out its pages with the pull-out pin-up instead, whereas Essential X-Men, and Avengers Universe tend to give extra story pages (so, for example, one might get several pages of the next chapter tagged onto the end of the 20 pages of a story).

You're right, a fortnightly schedule wouldn't work. I can just about afford the current 7 CEs out of my ever-diminishing disposable income. ;-) Another CE, no matter how compelling, would be out of my price range.

I suppose a few 100-page specials might allow some room to maneuver.

As for classic tales, I used to enjoy seeing them in the CEs, but they are so accessible now, thanks to reprint books and comiXology. Space is already at a premium so unless they are absolutely running out of material or catching up, I'd rather the CEs were modern material 95% of the time.

They definitely have a problem on their hands. They got burned with Secret Wars, having not run the Hickman Avengers and New Avengers books. Iron Man will be non-essential after Civil War II, I think. Neither Doom nor Riri have an obvious role in Secret Empire. Maybe they should sacrifice it to make room for both Captain America books, which are definitely essential to that event.

If they need to shuffle the CEs, Incredible Hulks looks totally irrelevant and is ripe for replacement. Two of the three titles in it are cancelled already.

I don't think Hickman's stuff was that essential to Secret Wars. I avoided his FF etc and still understood S.W.

We don't know who will figure in Secret Empire yet, but it looks like a big enough event to affect several comics, if not the whole line. As for Incredible Hulks, they won't cancel it as long as it's selling. The two back up strips will be replaced by Champions and the new She-Hulk series (Hulk) in due course.

Another likely contender for Incredible Hulks is U.S.Avengers which features the new Red Hulk.

I have the answer, guys.