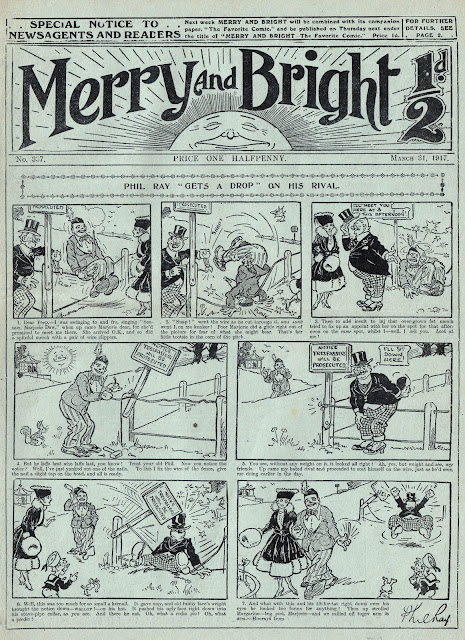 Merry and Bright was a weekly comic published by The Amalgamated Press from 1910 to 1935. It was printed with black ink on green paper, and, like most A.P. comics, had just 8 tabloid sized pages.

I bought this issue from 1917 recently, in fantastic condition proving, as I've always said, that if comics are looked after they won't fall apart after a few decades.

The cover strip features Phil Ray, a music-hall comedian of the time. Decades before Look-In, it was a trend to feature celebrities in strip form. (A.P. would emphasise this even more when they launched Film Fun three years later in 1920.) Artwork by Swedish-born cartoonist Alex Akerbladh.

As you may have noticed from the cover topline, Merry and Bright was about to absorb The Favourite Comic. Page two went into more detail in an editorial tucked away in the corner. (As always, click on the pages to see them full size.) 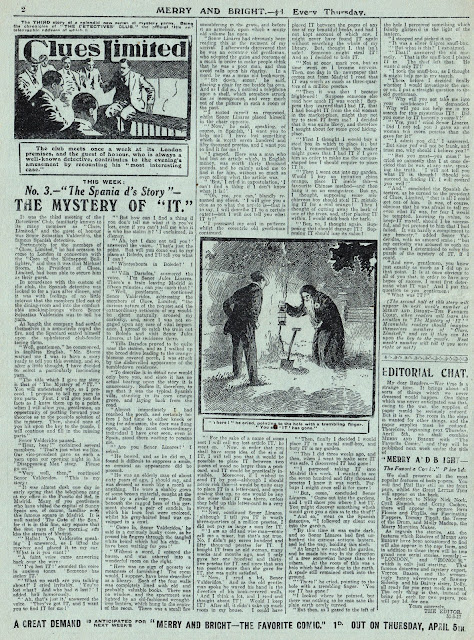 It's refreshing how honest the editorial is about the reasons for the merger. Here's a larger version to save you straining your eyes...

Merry and Bright had the usual equal division of strip pages and prose story pages. Here's another page of strips. Corny Cachou is by Bertie Brown. 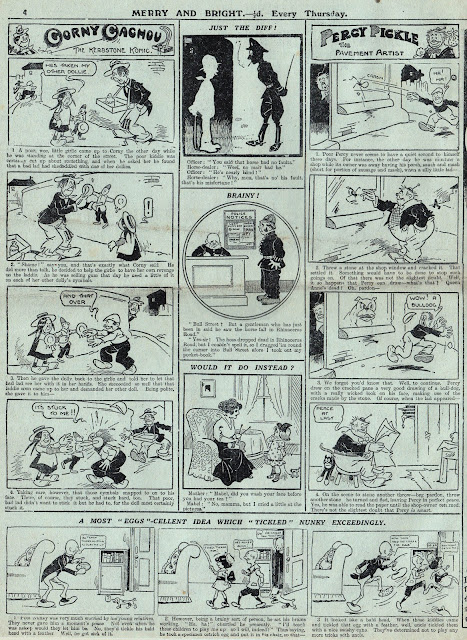 On the back page was Curly Kelly, drawn by G.M. Payne. I suspect that Curly may have been another real-life comedian of the day considering the strip uses a signature like the cover strip. Any info welcome. 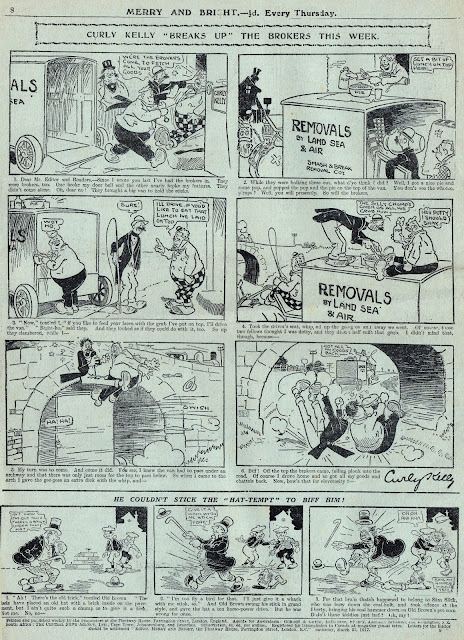 I hope you've enjoyed this look back at what kids were reading a century ago. Please post your comments below if you're inclined.

Thanks Lew it really shows the era...

What a strange creepy clown type man for the cover...

I also always love the comic heading they had in those days..

Yes, those old comic logos were really nicely designed. They reflect the times, when signwriting was more ornate. Design is more basic these days, but time moves on.

I notice they are using the US spelling, ie "Favorite" comic. Perhaps back then it was more common in the UK, as was hyphenating to-day and to-morrow

Well spotted. I hadn't noticed that. Interesting! Perhaps before the war, copies had been exported to America?

I've never heard of Phil Ray. He must have been a big name to feature on the cover but I just had a quick Google and could hardly find any information about him.

I noticed one speech bubble creeping onto the cover. Any idea when the first speech bubble appeared and why do you think they overtook the written narrative at the bottom of a frame?

There's a couple of speech balloons on the cover and, as you can see, they also feature in the other strips too. Speech balloons have always figured in comics, and actually pre-date comics. More info here:

The written narrative was mainly to give comics some literary merit but it gradually dropped out of favour over the years. It was still being used in comics such as Comic Cuts and Chips even in the 1950s though, and is still used in nursery comics to this day.

I know about Phil Ray but like 'Steve' said, there is little on old UK acts.. Sad to say America cares more about it's heritage in that respect then the UK does, even though ours is much longer.. sigh..

anyway, East London theatre Archive which isn't too bad but with an almost impossible search feature, might have some information to say if he was real or not, but like I noted, the search feature is impossible. For example, an 1904 programme for the London Music Hall features Phil Ray (Quaint Comedian) as one of the acts yet his name doesn't appear to find anything in any Search...

but you might be better off with the British newspaper archive. though it's a pay service outside of libraries (not all have access).

though I can find a popular Jack Kelly as a Comedian, or a Scottish 'Scotch Kelly' (very popular it seams).

kinda makes me think that maybe the signature was just used as part of the 'letter/diary' format of the strip..

I'm sure that the info on Phil Ray is out there in books, and possibly discussed in documentaries on the music hall acts. It's just not on the web. Actors and historians such as Roy Hudd would know of him, I'm sure.