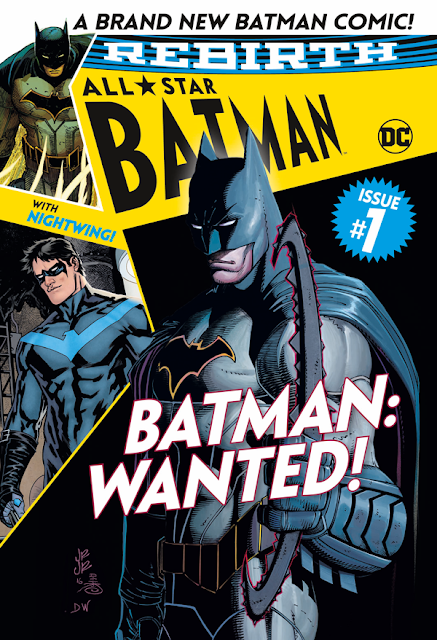 Titan Comics are launching a new Batman title to be sold in newsagents. All-Star Batman No.1 will reprint stories from DC's All-Star Batman and Nightwing titles. There'll also be a double-sided pull-out poster in every issue.

According to their PR, All-Star Batman No.1 is out now. Here's the content info for issue 1...

‘My Own Worst Enemy' - Parts 1 and 2
Batman is taking one of his most duplicitous villains out of Gotham City to a mysterious destination, but when a bounty is put on Batman’s head, any villain with something to hide is on their tail. The scene is set for a cross-country chase, with everyone gunning for Batman! 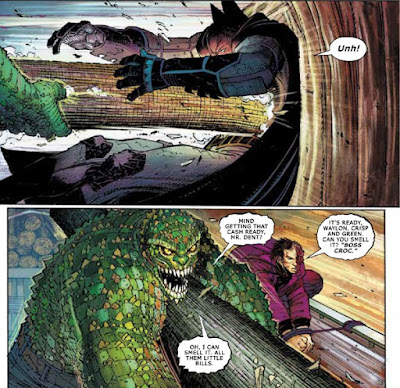 After the events of the 'Robin War', Dick Grayson tries to decide on who he really is – is he Robin, Agent 37, or is he Nightwing? With a little help from Damian, Batmanand his ‘arch-frenemy’ Midnighter, Dick has to find a new purpose in life! But what are the Court of Owls planning? 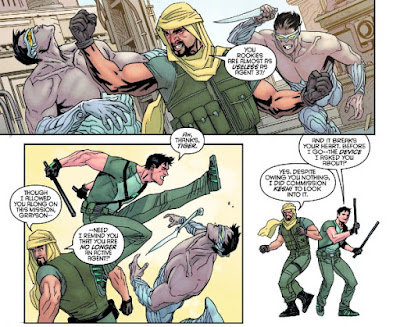 Titan also publish a long-running Batman comic... if you can find it. Some branches of WH Smith (such as my local one) haven't stocked it for about a year, and claim it doesn't exist! I can only assume it's been wrongly deleted from their database. Hopefully All-Star Batman won't suffer the same fate, but to make sure of your copies you can always subscribe directly from the publishers at this link:
https://titan.subscribeonline.co.uk/subscriptions/all-star-batman?offerCode=DCNEWS 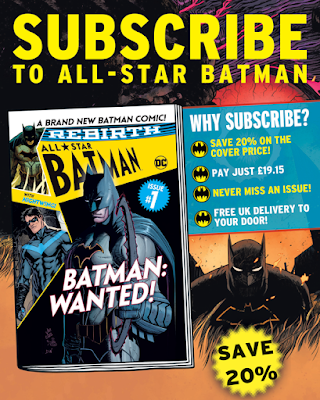 Sorry to be cynical, but I expect, in time, this'll have a reboot/relaunch/revamp - and then become unobtainable in WHSmith.

What's with the lack of letters pages in Titan's DC titles? No-one writing in? Or them not being bothered? Their CEs do feel like an afterthought (the constant reprint errors and incorrect next issue dates show that). Panini's CEs are rarely without letters pages, but Titan's CEs have them sporadically at best. Folk must be buying Titan's CEs - some have been published for a while - but no letters. Perhaps the Titan editors could put out a call for letters/e-mails. It'd be nice to read other people's views.

I apologize for the cynicism, but Titan continue to disappoint me. Their Facebook page visitor posts are 99% complaints about not finding issues, complaints about issues stopping, lack of updates, etc. I actually pray that some other company gets the DC licence soon. Panini probably wouldn't want the responsibility of several DC CEs, but surely someone must?

I'm not sure if a different UK publisher would make any difference to sales. Marvel characters are simply more popular than DC in this country, with the exception of Batman, and WH Smith's ordering system seems to have cocked that one up. Hopefully All-Star Batman will fare better, but a bimonthly schedule for a comic featuring continued stories isn't going to help.

There are some things that Titan could do to make their comics more accessible to new readers though, such as having a resumé of the stories on page 2, like Panini do with the Marvel titles. As for letters pages; even Panini struggle to get reader feedback some times, and one or two readers seem to dominate their letters pages. Last time I looked, Titan's comics did have the occasional letters page but presumably they're just not receiving enough. Kids today, eh?

It's a tough business getting comics to reach their audience in the UK these days. The Marvel and DC reprint titles are not available in most shops as you know. My corner shop has recently resumed stocking some (not all) of the Panini comics but I'm the only person buying them so it wouldn't surprise me if their suppliers decided to drop that order, as they did before. (Crazy isn't it? Having the supplier dictate what a newsagent stocks.)

There's also the bigger problem of Smiths putting these comics behind the counter "because they get nicked" which immediately prevents any new readers jumping on board and puts off more reserved readers because they don't like to ask for something that's out of reach.

Thanks for all the nuances, Lew. Makes sense. Lots to consider.

I regularly get letters published in Panini's titles. I try and have a break from doing it now and again as it would be nice to read other people's views; but then when I, and others, do have a break from writing letters, we then get blank letters pages. Frustrating.

I really can't understand why WHSmith can't sort out the Batman issue.

On a personal note, many have asked me why I don't subscribe. I live in an apartment block with communal mailboxes - and on three occasions in 18 months, parcels have gone missing or ended up elsewhere. Whenever we get a new postman, he seems to just throw the mail in whatever boxe he fancies, even if it doesn't match the numbered address (I often end up with people's mail). I don't subscribe to any publication for that reason.

So for that reason, I really do need the likes of WHSmith to sort out the Batman issue. Surely Titan and WHSmith can sort it out.

Regarding the bimonthly schedule for ALL-STAR BATMAN, it's frustrating. The first issue is very good, I like the idea of numerous supervillains pursuing Bats. But I don't particularly want to wait until 27th April for the next instalment. I want to support Titan's CEs, but a bimonthly schedule is too long.

Smiths won't sort out the problem until Titan tackle them about it. When I challenged Smiths on it they just insisted Batman comic didn't exist because their database had no record of it. I'm not going to bother again because you end up looking like some sort of nutcase in the shop. Titan have been informed a year ago. It's their problem to sort out.

I don't really go in for DC myself, but then you put that page up. John Romita Jr's work is so distinctive and a particular favourite; I may have to battle with my local WH Smith's for All-Star Batman for that alone.

Stephen, you're probably better off buying the trade paperback then. Both All-Star Batman's and Nightwing's should be out soon if they're not already.

And yeah, the bimonthly schedule sucks, but it could be worse. As of last month, their Doctor Who title no longer has a regular schedule at all. Apparently this year's issues are out on 12th January, 30th March, 27th April, 25th May, 24th August and 23rd November. Ridiculous!

As for retailers stocking the collectors editions, WHSmith do most of them - but not Batman. I've seen Batman/Superman (which has relaunched for Rebirth) and All-New Batman, but not Batman. My local newsagent, a McColls, has suddenly started getting Wolverine and Deadpool, but doesn't do any of the others. And my local Asda only does Astonishing Spider-Man.

Do Titan still reprint the American IDW Doctor Who stories in their monthly UK comic? Haven't seen it in a while. I know you used to "review" it here but you haven't recently. Has it been quietly euthanized?

This again? Titan NEVER reprinted the IDW strips in their comics. The stories in Titan's Doctor Who comics were commissioned by Titan's London office (mainly using British creators) and published by Titan for the direct market. The comic in Smith etc was just a newsstand version of those comics. Yes, it's still being published, but is now bi-monthly. Meanwhile, Titan's direct market Doctor Who comics continue to be monthly.