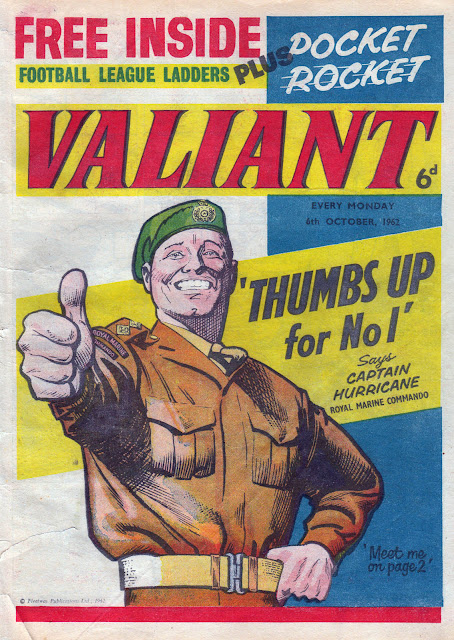 Fleetway Publications launched Valiant No.1 on Saturday 29th September 1962 (cover dated 6th October). Like Buster, launched two years earlier, Valiant was part of Fleetway's determination to modernise the comics line for a new era, with a bolder, cleaner look than the dated (and long-dead) comics such as Comic Cuts and Chips that had been produced by their predecessors The Amalgamated Press. Valiant actually replaced Film Fun on the schedule when that long-running comic merged into Buster a month before Valiant debuted. There was no doubt that Fleetway intended to clear the decks for their new style comics.

Valiant's 32 pages featured adventure strips with a few humour pages added to balance things out. One of those funnies was The Nutts, drawn by Angel Nadal, that would prove so popular it would remain in the comic until the final issue in 1976. 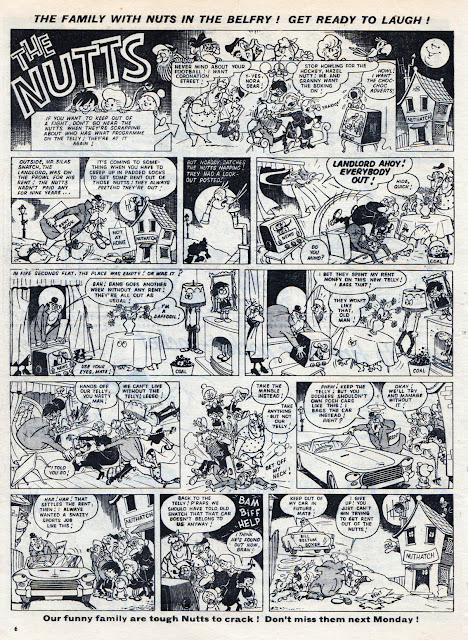 One of the most memorable series that appeared in the comic was The Steel Claw, written by Ken Bulmer and illustrated by Jesus Blasco. This atmospheric first episode reveals how Louis Crandell gained the power of invisibility. In these early tales, Crandall was a villain! When the strip proved popular, it was decided he should become a hero, and his evil ways were explained away as the result of the lab explosion. However, as can be seen in this first episode, Crandall was resentful and greedy before the accident... 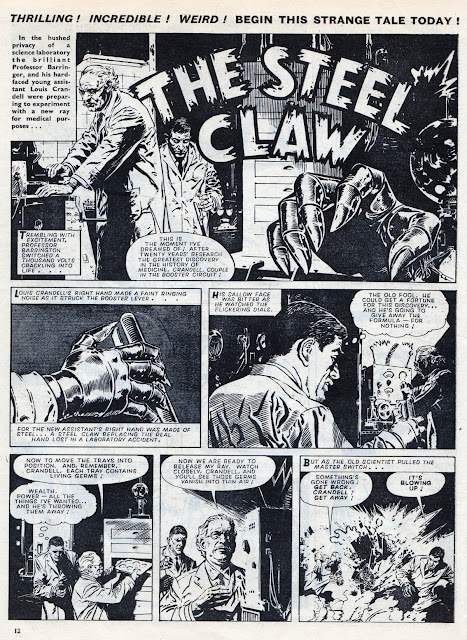 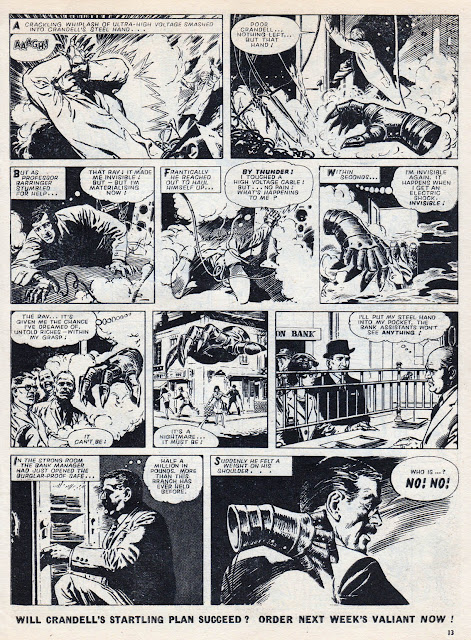 Valiant No.1 featured a high standard of talent, including the great Roy Wilson illustrating Percy the Problem Child. Wilson was considered the main humourist of the old A.P. comics, with the "house style" that others were encouraged to emulate. By 1962 he was sadly nearing the end of his life (he passed away in 1965) and his style was no longer flavour of the day of the fickle comics industry but he could still draw as well as anyone in the business. 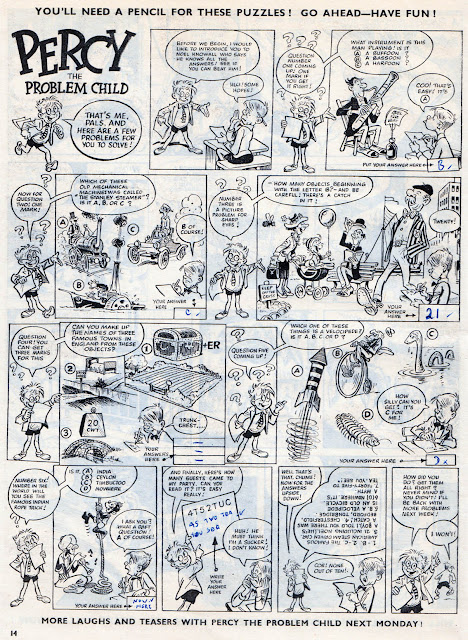 The centre pages of Valiant's first issue were taken up with episode one of To Glory we Steer, distinctively illustrated by Eric Parker. I must confess I found his style too 'heavy' for my liking as a child, but now I can appreciate what a skilled and unique artist he was. 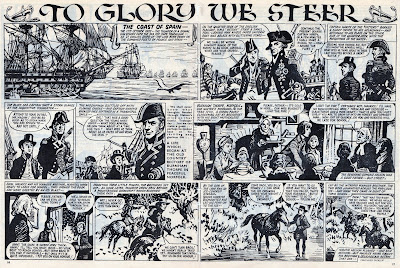 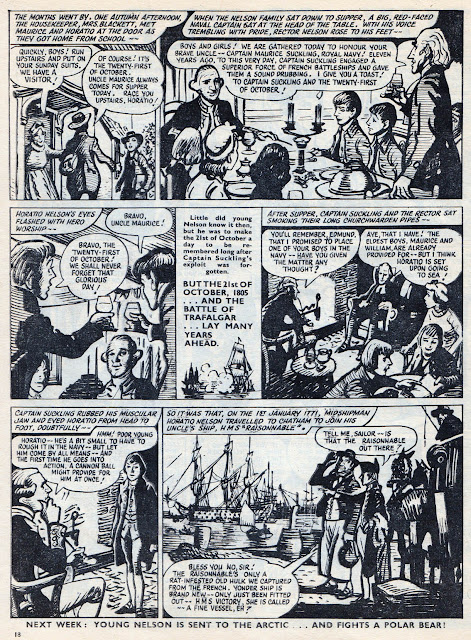 The editor's letter welcomed the readers on It's All Yours, a page inviting kids to send in their jokes and anecdotes. But how did they get submissions for the first issue? It was hardly a trade secret; they were simply made up as an example to show they type of material they wanted readers to submit. 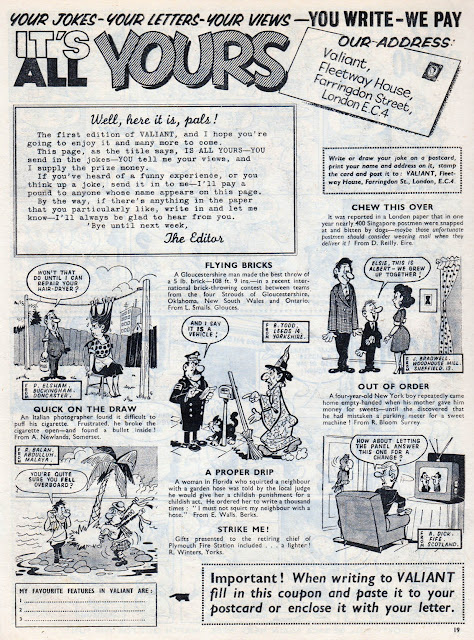 The struggles of working class heroes were always a good theme for British comics, and in Valiant No.1 we had Kid Gloves, the story of a boxer from the rough end of town. Superb artwork by Geoff Campion, one of Fleetway's finest artists. 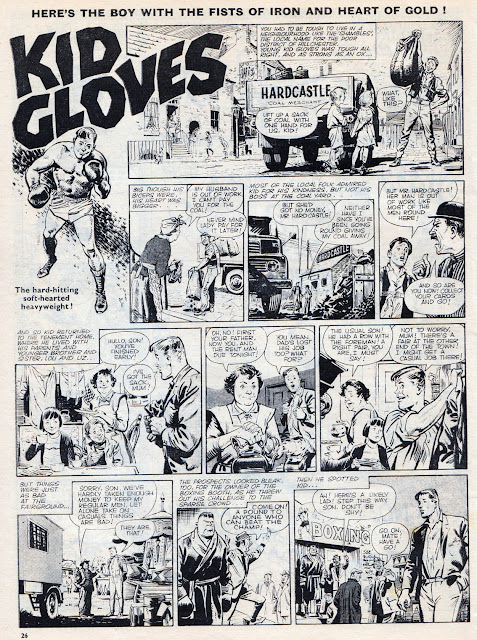 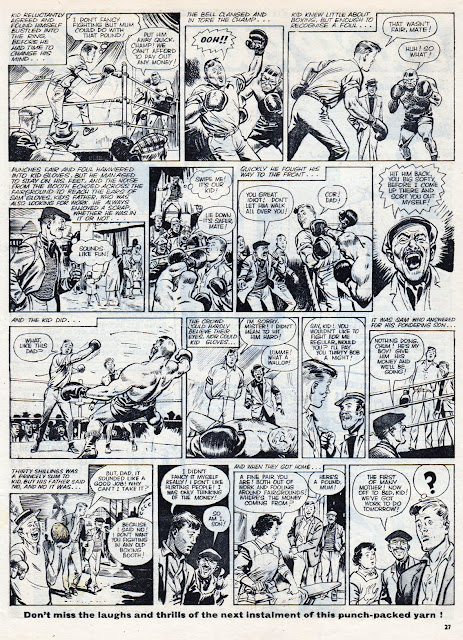 Campion also drew the back cover feature, Famous Fighters, that would graduate to the front cover after the first few issues. 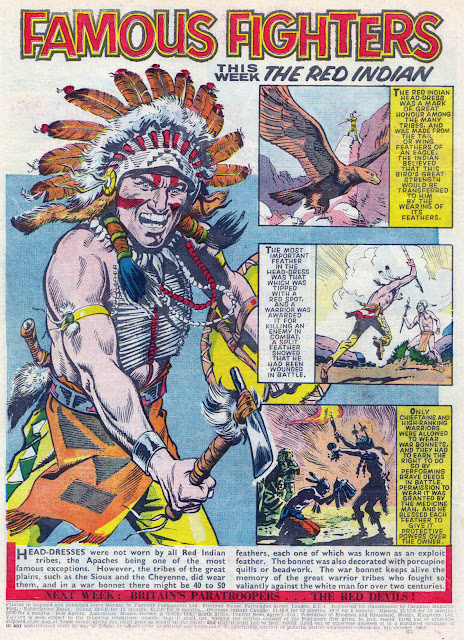 Valiant got off to a great start with this issue, with a strong line-up by the top talent in the business. It's no wonder the comic lasted as long as it did, running for 14 years in total before merging into Battle Picture Weekly.

Angel Nadal's artwork is definitely charming, and Blasco was skilled as well. UK artists too, of course ! But the involvement of spanish cartoonists into british comics is a side that'd deserve to be documented more often. I can recommend Los Profesionales by Carlos Gimenez to know about the other side of this trade, and I sure hope IDW will translate it sometime soon. Thank you for those scans.

Interesting that Luis Crandell started out as a villain but was made into a hero. The same thing happened with The Spider in Lion. One other thing. I suspect that nowadays a term other than "Red Indian" would have to have been used on the back cover. Different times, different standards.

Yes, Native American would be more appropriate today, and more accurate of course.

I suspect that editorial perhaps only expected The Steel Claw to run for a short period of time, like other strips about menacing villains, but its popularity changed the direction of the strip. The character was so popular that the comic offered exclusive Steel Claw T-Shirts via mail order at one stage. A rarity for the mostly reserved UK comics industry at the time.