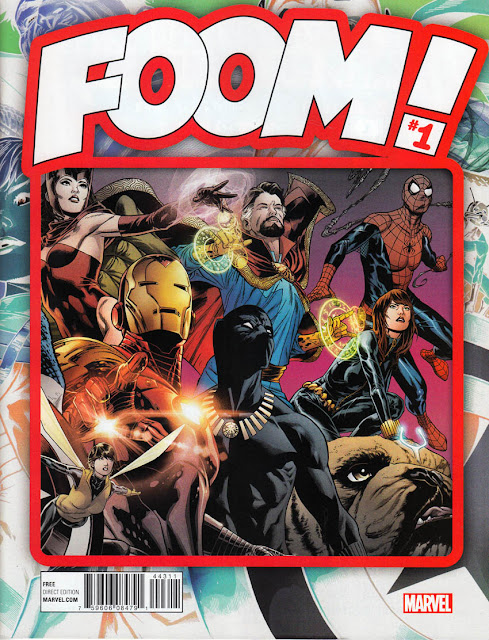 I was one of the original subscribers to FOOM back in 1973, and had every issue. For those of you who have never heard of it, FOOM was an acronym for Friends Of Ol' Marvel and the magazine was Marvel's own "fanzine". It provided news on upcoming comics and features, and was, for many of us, our first experience of a fanzine. (Although in actuality it was a professional mag, not a fanzine in the strictest sense.)

This week, Marvel brought FOOM back in a 40 page full colour glossy format. Free (if you're lucky) or a couple of quid if you're ordering it from UK sellers. I sent away for it, eagerly looking forward to the return of one of my favourite comics mags.

Except... it's sadly lacking in comparison to the original FOOM. Oh, the news aspect is there sure enough, heavily promoting Marvel Legacy, the company's latest gimmick, but that's mostly it. The old FOOM contained brand new artwork and covers specifically drawn for the mag (some even by Steranko, who superbly edited/designed the first four issues) but the new FOOM uses nothing but recycled art from comics of the past and upcoming Marvel Legacy issues. Quite a disappointment, giving it a throwaway feel.

A few years ago, Marvel revived the Marvel Spotlight title as an occasional magazine to promote their latest stuff, and this version of FOOM is closer to that than it is to its original incarnation.

Still, if you want to see what's coming up from Marvel, pick up a copy of FOOM from your local comic shop, but bear in mind that it's FOOM in name only.
Posted by Lew Stringer at 14:46

Email ThisBlogThis!Share to TwitterShare to FacebookShare to Pinterest
Labels: FOOM

It's not back permanently either - apparently it's a one-shot. I suppose it is kind of redundant these days when they can just use marvel.com or the comics news websites. From what I heard, the biggest news in it was that Uncanny Avengers and U.S.Avengers are ending - which isn't surprising considering both teams are involved in the new weekly Avengers: No Surrender story, which was announced this week - it's a rare US example of a comics merger. Foom was clearly just a token effort to look like the Marvel of 40 years ago, just part of the retro gimmick they have going on in Legacy.

Strange they didn't number it as FOOM No.23 under the circumstances. Ah well.

I'm sorry to see U.S.Avengers go. It was the only Avengers title I was buying (apart from the UK reprint edition).

FOOM 23 is coming... from Marvel UK. Dez promised it back in 1979 as a way of ensuring UK subscribers completed their subscription when the US edition was canned.

Ah yes, I remember that. I shall wait beside my letterbox in anticipation.