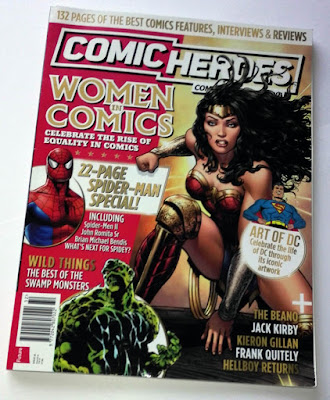 According to contributors, the magazine Comic Heroes has folded with its current issue. Launched by Future in 2010, it originally ran until 2014, and was then revived in 2015. Future also published a companion mag for younger readers called Your Comic Heroes but that only lasted for three issues.

It's a shame that not enough fans would support the only High Street magazine dedicated to the comics industry. People have often complained that the £7.99 cover price for 132 pages was too high, but those same people willingly pay £3.00 or more for a 20 page comic story. Personally, I felt that £7.99 for an informative quarterly magazine that took a few hours to read was quite reasonable.

I can appreciate though that if some fans only have an interest in certain areas of comics they don't want to pay for articles they're not going to read. The bane of publishing I guess.

Not that Comic Heroes was perfect of course. The latest issue has a heartfelt tribute to Leo Baxendale written by Leah Moore, but the images that editorial chose to illustrate it are Beano covers by Reg Carter and Dave Sutherland. Imagine a tribute to Jack Kirby being illustrated with art by Steve Ditko and Neal Adams. It just wouldn't happen, but humour comics don't get the same consideration. 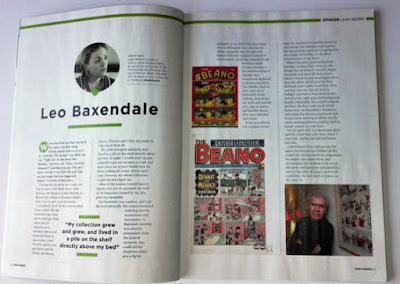 Comic Heroes tended to learn heavily towards American comics, as might be expected, hoping that people who go to see superhero movies would be attracted to articles on Wonder Woman and Spider-Man. However, it did balance this somewhat with informative features on independent comics, European creators, advice from pros, and other non-superhero articles. I would have liked to have seen more features on the history of British comics but maybe I'm partly to blame for that. I contributed two historical features for the early issues but haven't bothered since. Too late now, sadly. 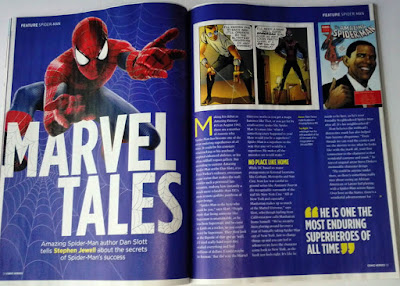 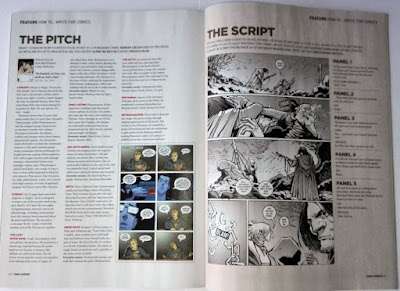 One big problem that I found with Comic Heroes was its availability in shops, or lack of it. I used to buy every issue from my corner shop, but then their suppliers decided my newsagent should try other magazines instead. (Why suppliers make such decisions for retailers seems crazy to me, but that's what my newsagent told me.) That meant a walk into town to buy it from WH Smith, until my local Smiths decided to stop stocking it. I bought the last few issues via mail order, but I imagine most readers would have just given up by then.

I'll miss Comic Heroes. It deserved to continue. I know most of us get our comics news from the Internet but it was good to have such info in a handy format. The final issue, No.32, is still available from newsagents and comic shops (if you're lucky).

I will also miss it, Lew.

I encountered availability issues, too.

It was a good, long read. Some of the articles were esoteric. I learnt so much. It was very global in its outlook, too. While it did, perhaps for economic reasons, devote a lot of pages to Marvel/DC (rightly so!), it had great interviews with creators and publishers not associated with the Big Two.

For a quarterly title, £7.99 wasn't too bad. It's about perspective, eh? Each to their own, but some wouldn't bat an eyelid at spending £20-30 a week on alcohol and tobacco. That's fine. But what do you really get from that other than negative changes to your body? ;-) I found £7.99 good value for money.

I really liked articles about lettering/colouring (underappreciated arts, if you ask me). Also, although it did cover topics associated with the Big Two, it did also focus on things perhaps not found in other magazines. Not many comic-related magazines I bought had extensive features on Swamp Thing, for instance.

It will be missed.

I rarely bothered with this. Too vanilla and lightweight and out to make a buck.

I read Alter Ego and Back Issue. Yes it is about the past but the past is better.

Well, Comic Heroes wasn't only about the latest superhero event. It covered the histories of the characters quite often, and always featured articles on non-superhero comics.

The past isn't always better. Old comics featured some clunkers too, and modern comics have as high a standard of art and story as they ever did.

I think it's a pity, but I'm not surprised. These days, publishers are quite ruthless when titles dip below a certain level. Niche fare can usually survive on readership levels that would have been unthinkable even a decade ago, but Comic Heroes must have finally slipped below, in a manner that made the publisher believe it wouldn't recover.

This is broadly endemic across a swathe of the industry right now. Almost everything tech-related is being pared right back, and gaming titles are also disappearing. The suggestion, I suppose, is to go online, but there's something very different about a magazine compared to a website. Pace. Layout. Surprise. That notion of an editor figuring out things of interest, rather than you blazing to a specific article and then heading elsewhere for more of the same.

I can't see any advantage for them to go online as there are already loads of comics websites. Plus it'd be even harder to make a profit that way.

The past, as Lew said, isn't always better.

We hear the same argument about films or music. I've seen some clunkers that were released in the 30s and 40s; while I have seen some excellent films today.

You'll find good and bad in every era of comics.

Thanks to ComiXology, I have been able to read more classic issues than ever. Not all have been good. And whilst we often hear that all modern comics are bad, well I look at something like Ms. Marvel or Animosity - and I think they are very good. And whilst there is an argument that ALL classic comics are excellent, well I've read classic Avengers or Hulk tales that really didn't appeal to me. And that's fine.

It's why I don't really like the term "Golden Age" when used about films, music, etc. There's good and bad in every era.

Regarding Craig's comments, a magazine is special. With a website, it can be overwhelming. So many articles, so many links. With a magazine, you know the editor has thoughtfully put together a package that will probably contain something of interest.

I'll miss it too - £7.99 once every three months hardly broke the bank ! But I've got a Comic Heroes pen which came free with the magazine in 2014 so that'll be a memento to remember CH by :)

CH should probably be celebrated for having a fairly long run, albeit with a long gap between issues and a hiatus in the middle. Especially as most other media & pop culture magazines (including many that Future also own) have also discovered the ability to use comics characters to shift copies. How often have TOTAL FILM and EMPIRE done 'superheroes' or 'comicbooks' issues? It feels like twice a year.

By some measures it is probably the most successful British magazine about comics sold through mainstream outlets. I recall COMICS INTERNATIONAL had a stab at newsagent distribution back in the 1990s but I don't think it amounted to a long run and I don't ever remember seeing a copy 'in the wild' so I assume distribution was patchy.

COMICS WORLD (nee COMICS COLLECTOR) had a good run in the early 1990s and could be found in some newsagents but it was still a bit hit-and-miss at times. That did well thanks to a combination of good journalism and the speculator boom which raised public interest as well as generated a lot of pre-internet advertising from publishers, dealers (all those 'hot' comics and must-have varients) and comic marts (indeed STARLOGGED once pulled a random issue of COMICS INTERNATIONAL and found that London played host to a mart virtually ever weekend). But, as the industry contracted mid-decade, it came to an abrupt end.

I can't think of any other ongoing comics magazine (rather than fanzines like FANTASY ADVERTISER and SPEAKEASY which enjoyed good direct sales distribution towards the end of their runs) that went mainstream and had a good run. Imports - of which there were many - are a different matter.

Even Marvel UK, when it was briefly trying to grow its magazine offering in the 1990s, passed on doing a magazine about comics... despite some other 'marginal' titles like the BLAKE'S 7 POSTER MAGAZINE making it into print.

There was also CRIKEY! which started having distribution via Borders and was a hit until Borders went belly up.

I but loads of American comic reading from Twomorrows. You can buy a PDF and save a chunk on the print edition (in $) and even more in £ as the import price is prohibitive: you have to be interested in most of what is in it.

Moving back to Comic Heroes.

I think it is more that what they write about [ie for american comics now] the readers read the comics they do not want to read about the comics & if they do then it is all online.

God, I miss CRIKEY! What an esoteric publication that was (in one issue, they covered a strip about an ape sheriff!).

I did pick up some issues of COMIC WORLD, but it was hard to get hold of.

I wish we could have a magazine like COMIC HEROES again.

Someone I spoke to criticized it for featuring mainstream stuff on the covers. Years ago, I remember a British wrestling magazine (POWER SLAM) being criticized for not showcasing British talents on its covers. Yet what was likely to hook/sell? A cover with an obscure British wrestler or a cover with Hulk Hogan on? Anyway, I think COMIC HEROES struck the right balance between obscure/esoteric stuff and mainstream features. Like I said, it'll be missed.