Commando comics in newsagents this week 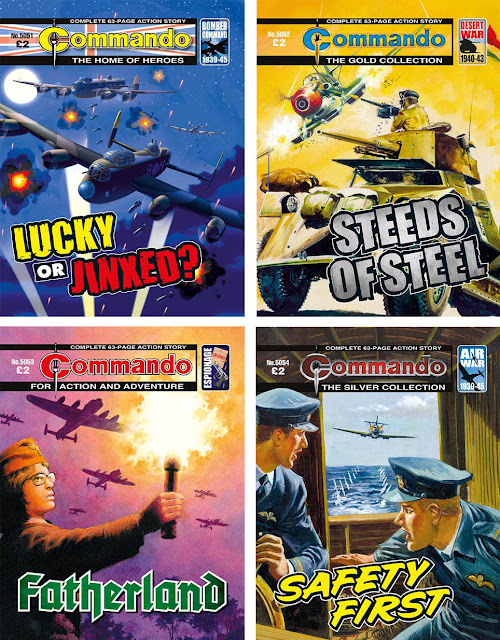 Here's the info on the four issues of Commando that will be on sale from Thursday 7th September. Thanks to D.C. Thomson for sending me the details and cover images.

5051: Home of Heroes: Lucky or Jinxed
A tale of enemies turned friends, as only George Low could tell it, Ned Jenkins is a Lancaster tail-gunner who doesn’t know if he’s lucky to have survived so many close scrapes, or jinxed that his fellow crewmates were not so fortunate. Heading this rivalry is radio operator Walter Wright, who reads Ned’s shell-shocked nonchalance as callous arrogance and so begins their feud.

5052: Gold Collection: Steeds of Steel
Perfect for the Gold Collection, Sanfeliz’s cover is full of yellows, contrasting nicely against the suitably metallic title. Meanwhile, ‘Steeds of Steel’ is a great example of Biesla’s interior artwork, with deep shading and dark backgrounds, making the shadows of the desert stand out, adding a noir style, complimenting C G Walker’s story.

Set in the Libyan desert, Martin Plummer and Neil Hamilton have joined their fathers’ regiments, ready to serve in WWII. Both fathers had fought at Meena River, where, ignoring sense, Plummer ordered Hamilton to charge against unbeatable odds, resulting in his death and tragic losses. Fearing court martial, Plummer then blamed Hamilton for the defeat. Now, amidst another battle, their sons continue this rivalry…
|Story | C G Walker| Art | Bielsa | Cover | Sanfeliz |
Originally Commando No 387 (1969) Reprinted No 1103 (1977)

5053: Action and Adventure: Fatherland
Iain McLaughlin’s story follows Lisa Fisher, formerly Fischer, a British spy tasked with infiltrating German intelligence on the Channel Islands. The title for this issue is perfect as it plays on the Nazi epithet for Germany during the Second World War, while also commenting on Lisa’s paternal rejection as she faces off against her fanatical Nazi father and brother.

Wrapping this neat package is Ian Kennedy’s cover, which features soft purples and pinks, complementing our heroine as she holds a flare to the sky, like an Olympic torch, lighting the way for allied aircraft. Lisa’s femininity is never shied away from in the interior art either, depicted with the classical beauty of Virginia McKenna in Carve Her Name with Pride, her capability is never muddled with masculinity, depicting her as a proficient spy without sacrificing her gender.
|Story | Iain McLaughlin | Art | Rodriguez & Morhain | Cover | Ian Kennedy |

5054: Silver Collection: Safety First
Set primarily during air battles over the Mediterranean, Ian Clark’s story follows amateur pilot Johnny Lees, who couldn’t wait to join the R.A.F. But, when Johnny realises that he’s not as prepared to fly as he thought, he is taken under the wing of Nat Rankin, who teaches Johnny how to survive at all costs…

Manuel Benet’s cover sets the aerial action for this issue, framing the enemy aircraft with the cockpit doorway, as we look over the shoulders of the pilots at the firing enemy plane. Benet then maintains this attention to aircraft detail in his interior art, depicting Tiger Moths, Gladiators, Fiat CR-42s… and that’s just in the first ten pages!
|Story | Ian Clark| Art | Manuel Benet | Cover | Manuel Benet |
Originally Commando No 2639 (1993)