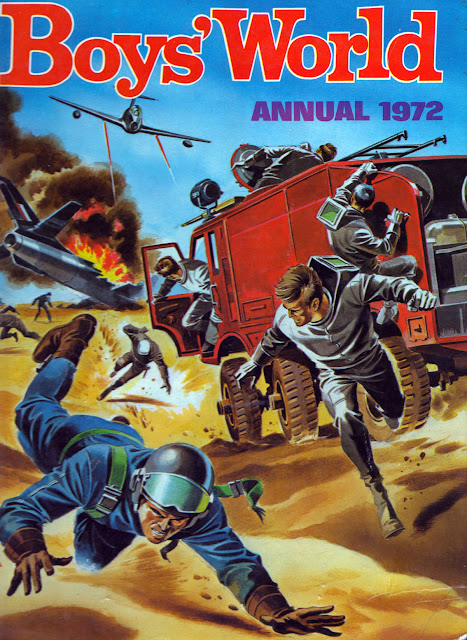 Mike Noble is well known for his fantastic comic strip work for TV21 and Look-In amongst other comics, but here's something that some of you may not have seen before. (It was a new discovery for me anyway, when I bought this book on eBay last week.) Mike's cover artwork for Boys' World Annual 1972 (published in 1971 by Hamlyn for Odhams Books).

Sadly, there's no art by Mike inside the book, but for my money it was worth buying for the cover alone, so I thought I'd share it with you on my blog today. Mike Noble has been my favourite adventure comics artist since I was 5 years old.

The contents are a mixture of a handful of short complete adventure stories (some reprint) and features. Boys' World weekly only ran from 1963 to 1964, but the annual continued until this final one for 1972.
Posted by Lew Stringer at 08:00

As usual, nothing less than wonderful from Mike Noble; a range of classic poses here. Every time I've tried to steal them, I can never get that wonderful 'hovering in mid-air with forward motion' that he catches so effortlessly.

Yes, absolutely brilliant, and full of dynamism. Thanks for commenting, Lee!

Hi Lew,
Did Mike Noble do the art used in the titles for Captain Scarlet. It kind of looks similar.
Also did he use watercolours, gouache or oils for the comic strips. Just curious :)

It has been amusing to me that a comic that was cancelled due to low sales would still have an annual several years later. But since they usually had good content why complain.

Annuals tended to have good sales due to their longer shelf life, and being brought as Christmas presents, so that kept the titles going for a bit, thankfully.

Quamar, no, it was Ron Embleton who illustrated those end credits. He also drew the Captain Scarlet strip in TV21 initially.