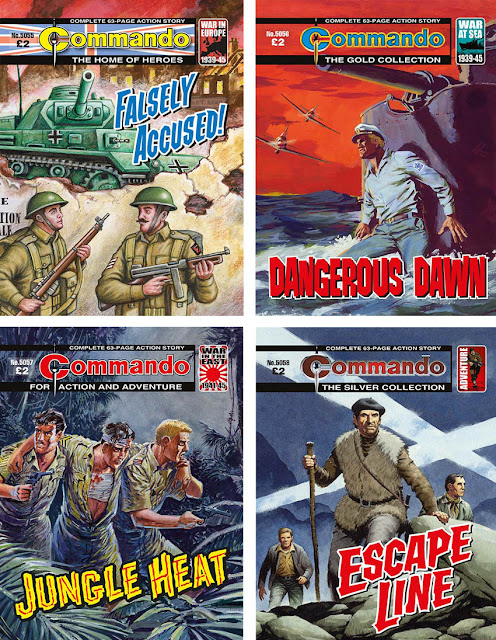 Here's the latest info on the four issues of Commando that will be out this week. In answer to a few who expressed surprise that "Command os still going?", D.C. Thomson publish eight issues a month (four every fortnight) of this, Britain's longest-running adventure comic! Every other issue is brand new, alternating with a reprint.

May, 1940. The Third Reich invades France, unstoppable as they progressed over the unforgiving French soil. Forced to retreat to the coast, the British Expeditionary Force faced intense struggle from the invading Nazis. That’s when Private Bill Greaves’ unit was obliterated by an incoming Junkers, leaving him the sole survivor. Desperate to regroup, Bill’s worries are far from over when, seeking shelter, he finds more enemies in the form of two deserters looting a French Manor…

Written and drawn by Jaume Forns, with cover art by David Alexander, the story and art merge perfectly, complimenting each other under Forns’ auteuristic control, while Alexander’s traditional art cover shows the claustrophobic intensity of the ruined French village.

When Petty Officer Gordon Laker is captured by a Japanese patrol boat, surrender is never an option – but neither is escape. Hell-bent on revenge for his sunken submarine crew, Laker isn’t ready to give up and if his Japanese captors think he’s going to a P.O.W. camp, then they don’t know their port from their starboard! No, Laker is ready to take that boat, sail for the nearest Allied port and get back to battle.

Patrolling the South Pacific in their Catalina, bickering R.A.A.F. pilots Dave Keating and Roger Smith’s plane crashes into the Papua New Guinea jungle, an island occupied by the Japanese. The survivors manage to radio for help – but it will be two days before reinforcements arrive. Until then, they must face tropical heat, poisonous wildlife, dehydration, booby-traps, Japanese patrols and each other…

A series of lifelines run by French Resistance men, “COBWEB” helped ferry downed aircrew back to Britain by crossing the Pyrenees into neutral Spain. Helping them is Marcel Dupont, a former French journalist recently released from captivity in Spain after being betrayed when escaping the Civil War. Now, leading a group of Allies across the perilous mountains, Marcel’s guide seems hauntingly familiar… Could he be the same man who led him to capture so many years ago?

A twisting story that will keep you guessing, Alan Hemum’s Silver Age issue takes inspiration from classic westerns, with artwork from Garijo that really draws from the beauty and danger of the Pyrenees– and all wrapped up in an Ian Kennedy cover to boot!