Commando comics out this week 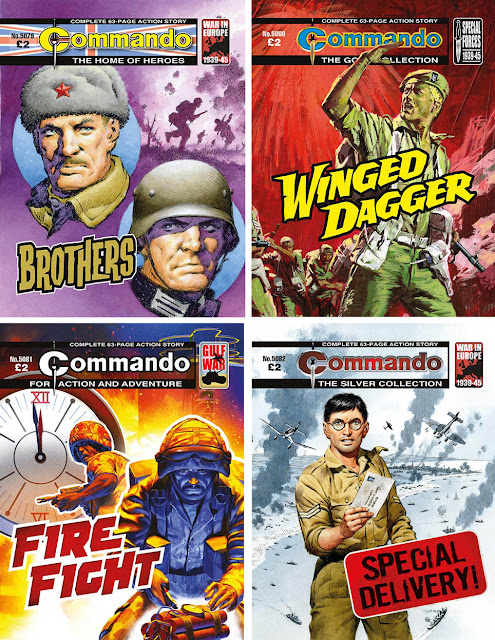 On sale from Thursday 14th December...

Latvian brothers Maris and Andrejs Vejonis joined the Wehrmacht after the Baltic States were annexed by the rise of Communism. However, it didn’t take them long to realise their mistake, as they witnessed first-hand the brutality of the Waffen S.S. But they were about to discover that the Russkies were just as callous, as Andrejs swaps sides and takes up arms with the Red Army. Now, fighting on either side of the battlefield, more than once Maris and Andrejs find themselves staring down the barrel of their brother’s rifle…

Colin Watson’s thrilling story of fraternal friction perfectly fits into the Eastern Front setting, while the brothers’ chalk and cheese personas are rendered charmingly in Castro and Morhain’s art in both the old and young versions of the men, as well as the insets on Ian Kennedy’s cover.

Left behind by one of his own men after being shot through the leg by a German sniper, S.A.S. Major Jeff Turner was rescued by Italian villagers – but it wasn’t enough. Though saved from death, Turner was pronounced an invalid, meaning his days in the S.A.S. were over as he was reassigned to a firefighting detail. However, it wasn’t long before Turner came face to face with the man who left him to die… The man now in charge of his S.A.S. regiment.

With spectacularly moody interior art by Gonzalez, the sheer grit of Spence’s story becomes apparent from page one. Topping this all off is a dynamic red and green cover from Penalva with thick oil strokes, really adding to the bulk of the S.A.S. figures.

Their mission was to hold an oil refinery in the middle of the Kuwait desert. Reinforcements were due at dawn, but that was a long way away for ex-firefighter Carl Strode and his team, especially when Iraqi trucks pulled up, infiltrating the facility with guns… and bombs. This would be the hottest situation Strode had ever been in – but was he up to the task?

With each page of Dominic Teague’s story more tense than the last, the stakes are raised along with the thermometer in this mighty issue. Expect blinding flames and dark shadows from Rezzonico, as well as a terrific first Commando cover from Neil Roberts, showing Strode overcast with purples, the flames changing from orange to white-hot behind him in an explosive panorama.

An ex-postman and stickler for the rules, when Corporal Johnny Bishop’s squadron is destroyed by a Stuka bomb, honour and determination meant one thing: he would deliver the surviving letter – even if he died in the process. But the British Expeditionary Forces’ retreat to Dunkirk was not the easiest route to navigate, as Junkers, Panzers and Nazi soldiers in their deadly Blitzkrieg chase Johnny right to the French coast.

In Mike Knowles ‘Saving Private Ryan’-esque story of finding one soldier amongst an army of men, Knowles juggles action and tongue-in-cheek humour, with C. T. Rigby providing superb accompanying artwork to both aspects. Ian Kennedy’s cover is a real treat too, with our hero reaching out to reader, the eponymous letter clutched in his hand.