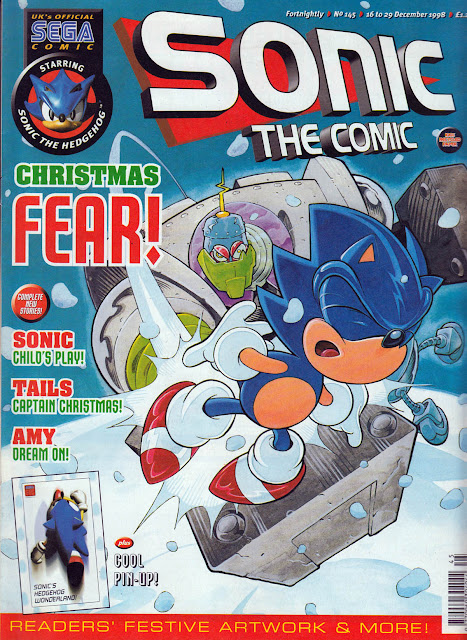 In the 1990s, work was getting a bit thin, but it's useful being an artist and a writer as I was fortunate enough to be commissioned as a writer on Sonic the Comic, Egmont's hugely popular fortnightly. Here's a few pages from the Christmas issue for 1998.

The cover is by Richard Elson, who always provided dynamic images and was perfect for being the main artist on the Sonic the Hedgehog lead strip.

STC (as it was often abbreviated as) had four stories of five to seven pages each in every 32 page issue. Some were serials, some were complete stories. This gave us plenty of room to build a story and develop the characters. The lead story was always Sonic the Hedgehog of course, usually written by Nigel Kitching, and drawn by Richard Elson. 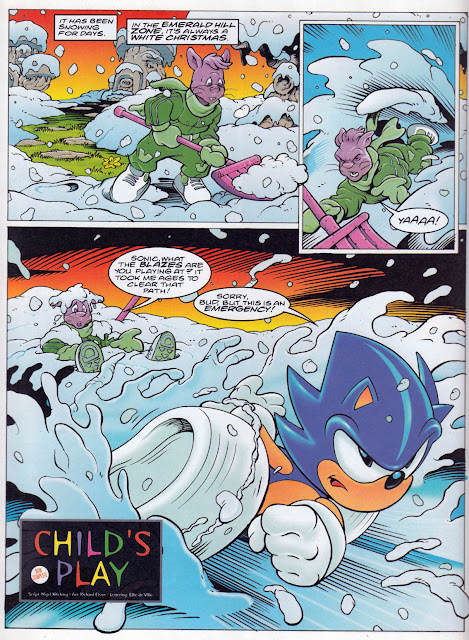 For some reason, some of the strips in this issue carried the wrong credits. This story I wrote, Dream On, was drawn by Carl Flint, but it's credited to Bob Corona. Carl did a great job on this, producing some eerie, nightmarish visuals, perfectly suited to the story. Just to give you a bit of back story, every issue, Amy and Tekno were travelling to different worlds and dimensions, thanks to the mysterious Ring of Eternity... 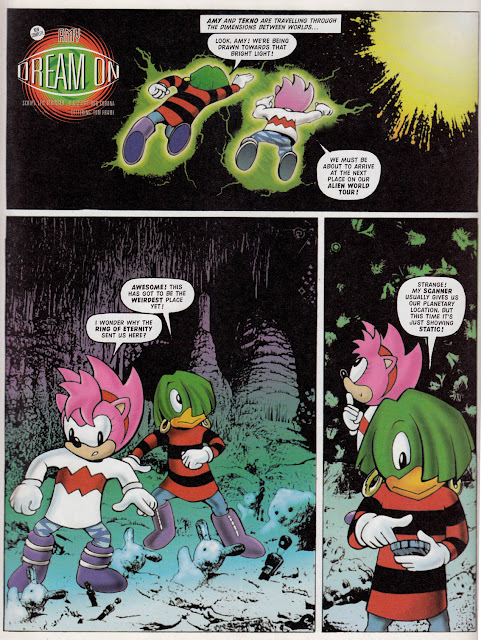 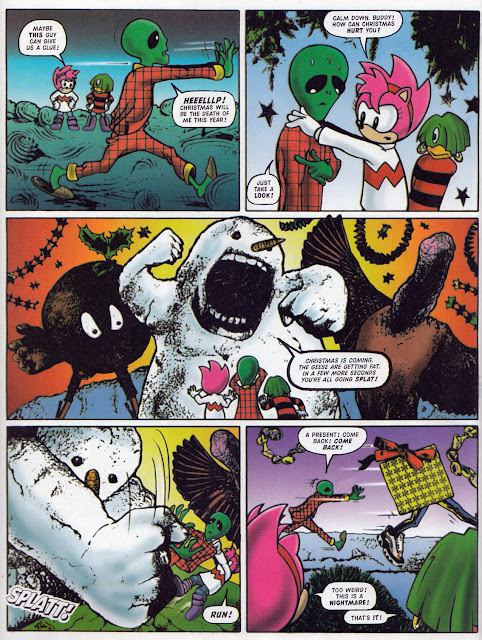 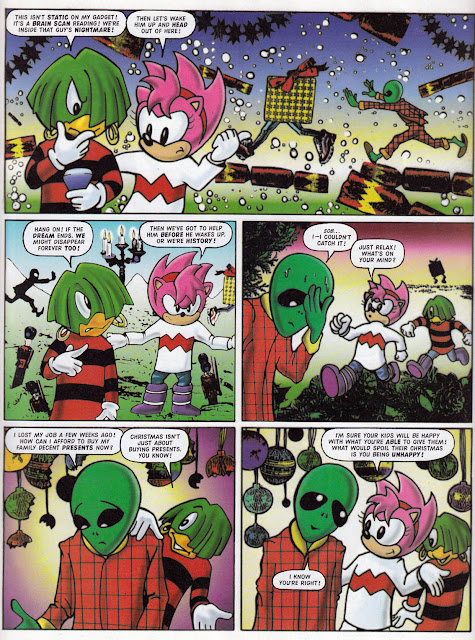 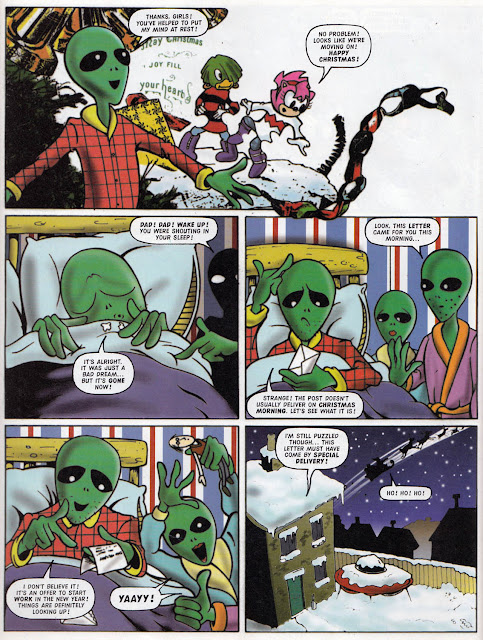 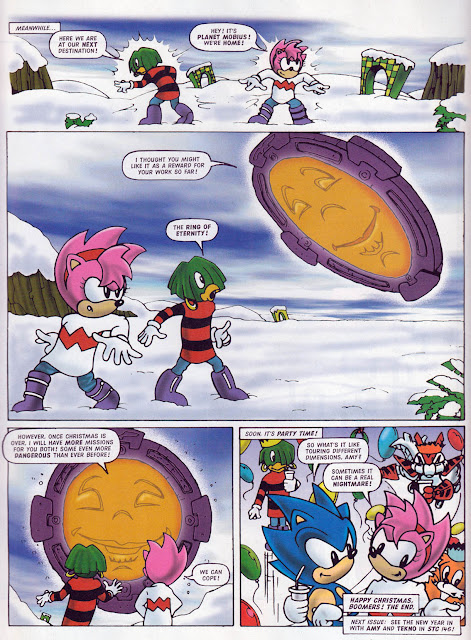 The third story, Captain Christmas, is credited to Nigel Kitching and Nigel Dobbyn, but it's actually written by me with art by Bob Corona. Here's page one of the five page story... 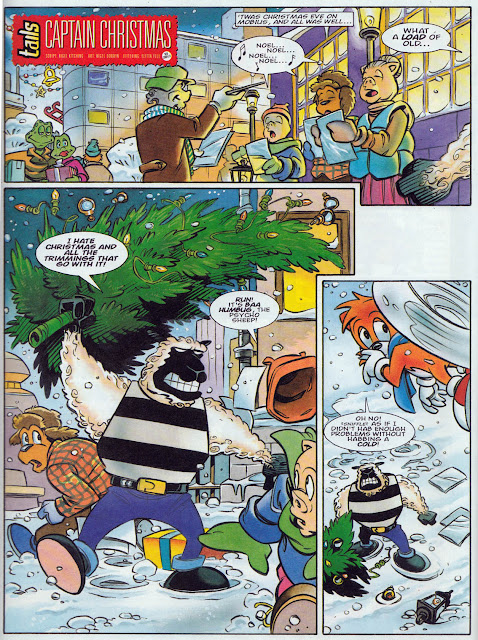 The fourth story was a reprint, and not Christmas related.

Sonic the Comic was a great comic to work on and it was considered by many to be a perfect middle ground between comics like The Beano and 2000AD. It's a pity there's nothing like it on the newsstands today.

Looks like Tekno got a Dennis the Menace jumper for Christmas that year!

The reprints came in gradually. The last time I wrote for it, the lead strip was the only new thing in it. Wouldn't surprise me if it went all reprint, as that seemed to be the way they wound down comics in the 1990s, with Buster having the same fate.

I created Tekno but I don't think I gave her a stripey jumper in my sketch. I wouldn't have mimicked such a distinctive rival character design like that.

It was over the next year or so STC's reprints grew, gradually adding two, then three reprints per issue. It was STC 184 that had the last original story (1 out of 4) in June 2000. The comic lasted about eighteen months - which is reasonably impressive for a full reprint comic- before cancellation in Jan 2002.

Loved STC, although was less of a regular reader than I once was when this featured ish came out, I always loved having a read when I could and was sad when it ended. The descrption of a stepping stone between the Beano and 2000 AD is spot on - although I've never been a big 2000AD reader, it was a stepping stone for me between the Beano and my Marvel obsession of longer seralised stories. I look back on STC with enormous fondness and thank you Lew for playing your part in it. You helped to bring me - and my friends - many happy hours. Me and the lad next door used to rush down the newsagent every fortnight around the issue 100 era and read it in the garden and debate where the story was going to go next!

It's always heartwarming to hear anecdotes like that, Chris. That's what this job is all about; creating entertainment that the readers look forward to every issue.

All the very best for Christmas and 2018, Chris!

Sonic the Comic was such a great read back when I was growing up. I really enjoyed the art of Richard Elson. So much so that I wrote to him and sent him an illustration asking for some feedback; he was kind enough to not only write back but to include a sketch of Sonic and photocopies of his work reproduced in A3 size so I could get a sense of the scale he worked at. It really encouraged me to continue drawing and nowadays I work in advertising and while I don't get to do comic work I do get to illustrate for some really fun film projects. I still own that letter and look at it from time to time.
I hope Richard Elson is doing well. I probably owe both him and you a drink or two for all the inspiration you've provided over the years.
PS. My little brother (35 years of age) is currently flaunting his copy of Combat Colin number 1 in front of me.

I'm pleased to hear you enjoyed STC! That was really nice of Richard to do that for you. I'll alert him to this post so he can see your comment. Richard's doing fine, drawing strips for 2000AD and others these days. We keep in touch fairly regularly by phone.

I'm also pleased to hear your brother has Combat Colin No.1. Issue 2 will be out later next month!