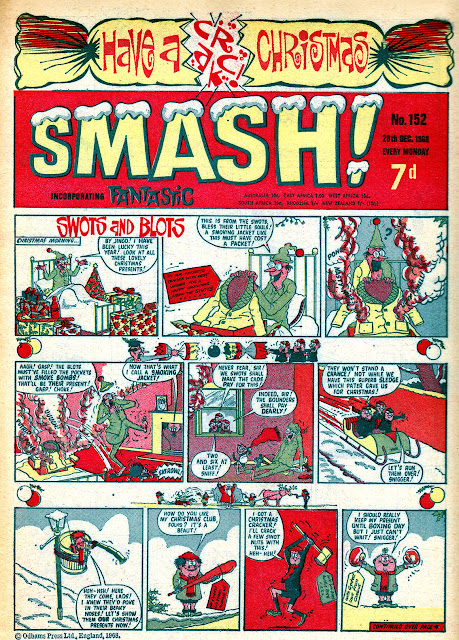 I showed a few pages from this issue several years ago but I've done better quality scans now and added more pages. This 1968 Christmas issue of Smash! was the end of an (admittedly short) era really. The year had seen all the Odhams 'Power Comics' drop like flies and merge together, culminating in Smash! and Pow! Incorporating Fantastic, and by year's end it was just simplified to Smash! incorporating Fantastic.

That said, this Christmas issue is, as its topline suggests, a cracker.

The cover strip, Swots and Blots, is drawn by Mike Lacey, rapidly becoming one of the top cartoonists in the business at that time. 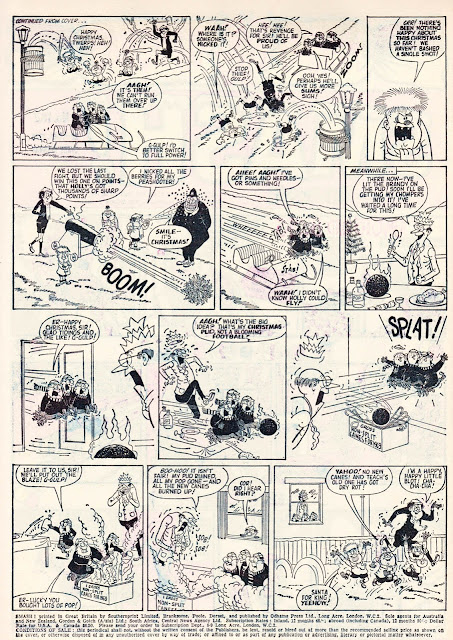 Inside, one of my favourite ever strips, and a series that would be a huge influence on my own work. The Cloak, created, written, and drawn by Mike Higgs. I'm proud to say that in the early 1980s I worked as Mike's assistant for a short time, and for many years have counted him as one of my best friends. The Cloak really inspired me as a kid to do my own comedy-action serial, which I eventually did with Combat Colin! 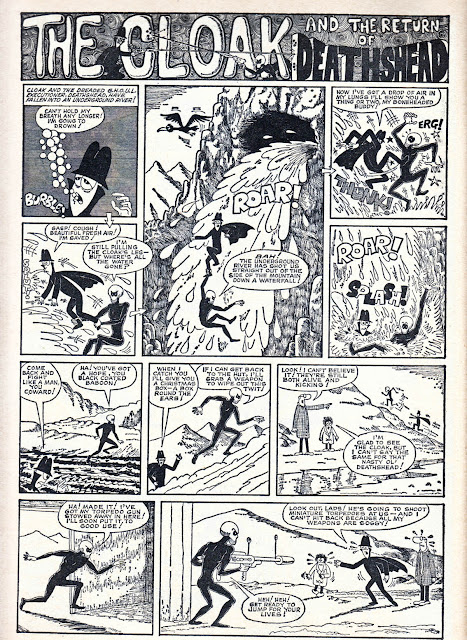 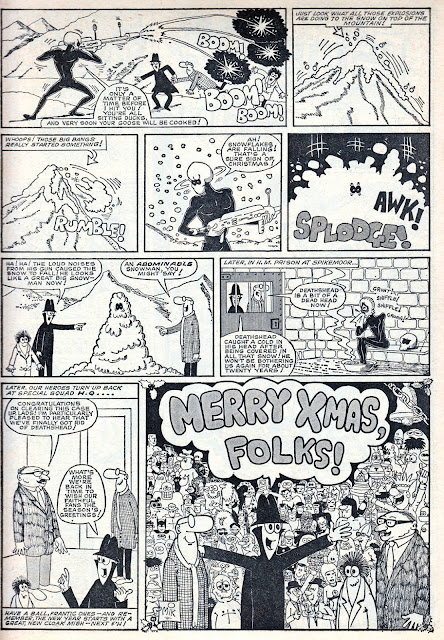 Smash! was a great comic, packed with originated humour and adventure strips, plus Marvel reprints! At this stage, it was running The Fantastic Four and Thor, resized and adjusted to fit the large UK page format... 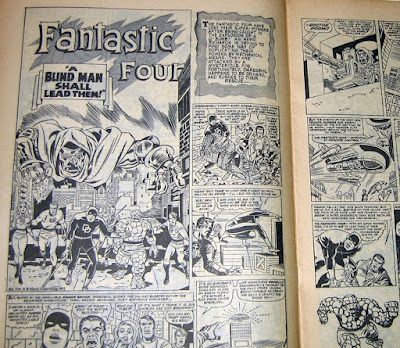 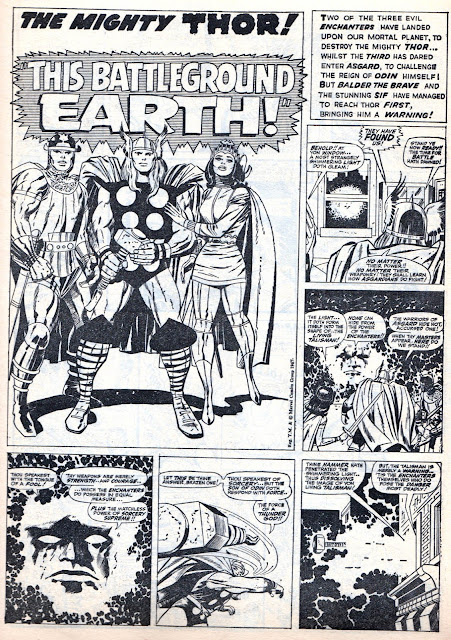 One of the main funnies in Smash! from day one was Bad Penny. Although somewhat of a Minnie the Minx imitation, Penny did have her own personality. I'm not sure if these pages are drawn by Leo Baxendale or Mike Brown, or both! I think it's all Leo. 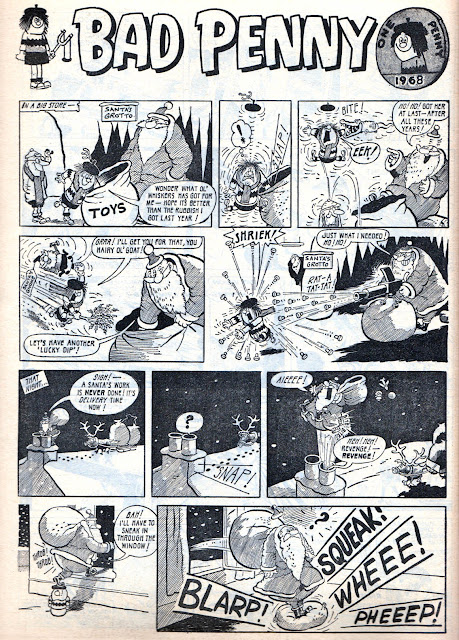 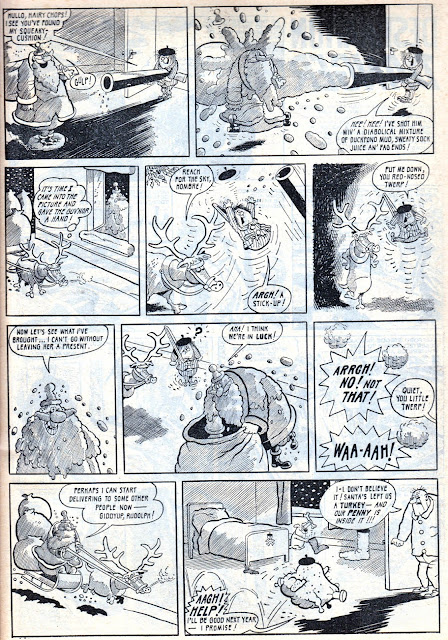 Quite simply the best strip in the comic, - or in any comic of the time, in my opinion, - was The Nervs! Ken Reid had taken over the strip several weeks earlier and made it his own. Comedy vulgarity at its finest, and it disturbed IPC management so much they forbade it from ever being reprinted! 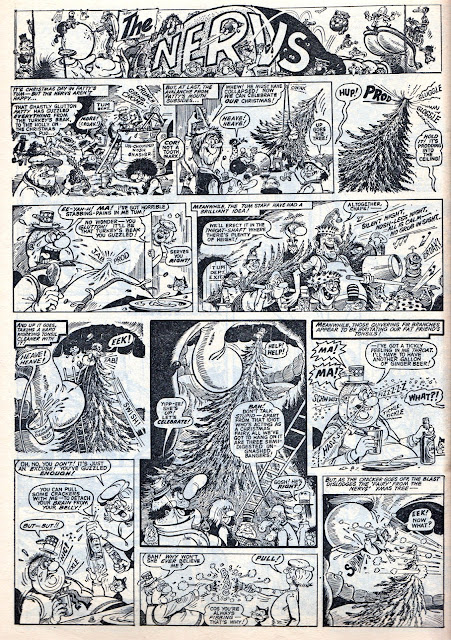 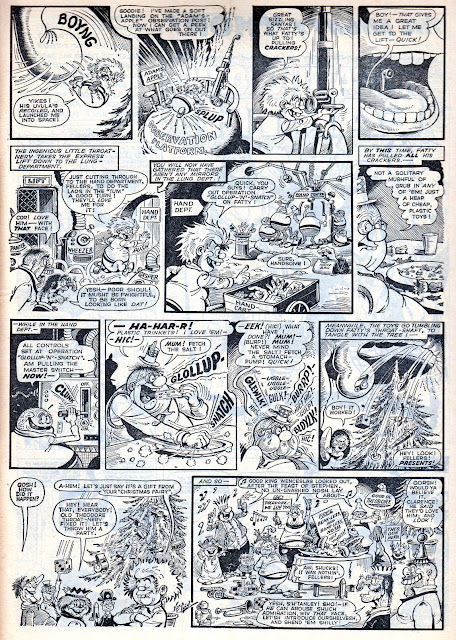 On the back page was Sammy Shrink, by Terry Bave. Sammy had started life in Wham! comic in 1966 (then drawn by Dave Jenner) and had proven incredibly popular. So much so, that IPC revived him years later for Whizzer and Chips. 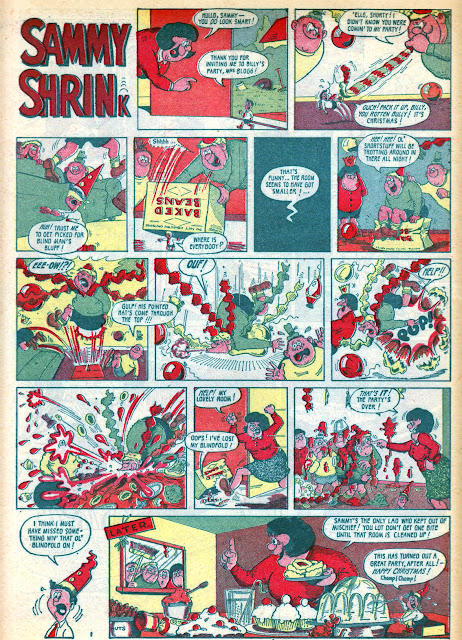 Tap on images to enlarge them.

Incidentally, it's Lew, not Lou.

Thank you for this piece. Truth be told your historical columns are by far my favourites. I always learn something. I take it by this time The Batman strip had disappeared from Smash!

Batman was still in the comic at this point but in black and white.

Probably mentioned by me before, but Batman's very last week in Smash was a curious affair, with about twice as many pictures as usual crammed in, and a story which was rather abridged in that Batman's escape from a submarine through a torpedo tube wasn't properly explained (my theory t the time was that his escape had been added in by Smash, i don't know if anyone can shed further light on it?)
Keep up the excellent work, I especially like seeing the Christmas issues.

Not seen that particular Cloak strip before. It's great! Still waiting on Mr Higgs to make a printed collection of those aviable. Would be awsome.

That's... Quite a varied content! LOL, whatever possessed them to think that was a good idea? Thor and funnies in one comi

It was a brilliant idea actually, Anon. It gave the comic a great variety and inspired those of us who read it to regard UK humour and adventure strips as having equal merit to American comics.

I'm not sure if it'll happen, Tiniebras, but I always encourage Mike that it would sell.

I'll check that episode out, Nutty. I must admit, by that stage, Batman was one of my least favourite strips in Smash! and I only used to skim-read it.

I will gladly second the Cloak Collection idea. Just make sure there is a Canadian distributor.

I like all the Marvel heroes joining in at The Cloak's party - The Avengers, FF, X-Men, it must have taken ages... Who's the little guy in the story who looks like Beaker in The Muppets, or have I asked about him before?

An absolutely, er, smashing post, Lew! Is that "ban" on reprinting The Nervs still in force? Surely not! Would love to see a collection of this strip like the recent Faceache book.

I'm sure the ban has been forgotten by now, John, as the people who instigated it have long since retired or passed away. The problem is The Nervs and other strips of that period are currently owned by Time Inc. who don't appear to have any interest in reprinting them.

Robert, that's Shortstuff who, along with Mole (the one with the big nose) were The Cloak's assistants.