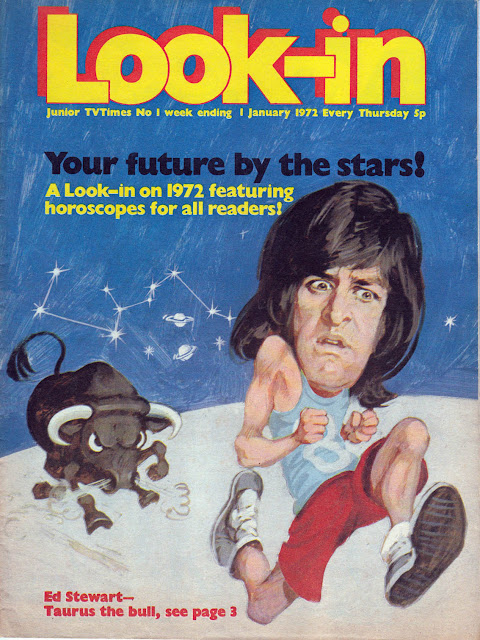 There's time for one final post this year so here are a few pages from the issue of Look-In dated 1st January 1972 (published at the end of 1971). Look-In had proved to be the big hit of 1971 when it was launched. I always preferred rival comic Countdown (also launched that year) but Look-In had its own distinct style and I can understand why it was so popular.

The cover is by Arnaldo Putzu, who contributed many painted covers for the comic over the years. You'll notice it's issue No.1. Look-In renumbered itself at the start of every year, presumably to entice new readers. It didn't seem to do it any harm.

Inside, Leslie Crowther tries to keep up his New Year's Resolution in Crowrther In Trouble, drawn by Tom Kerr... 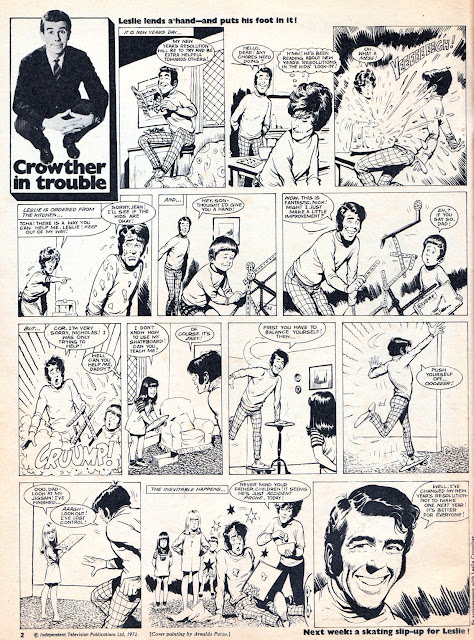 This issue featured three pages of horoscopes for the TV stars of the day. One of whom has definitely fallen from grace in recent times. Here's one of the pages... 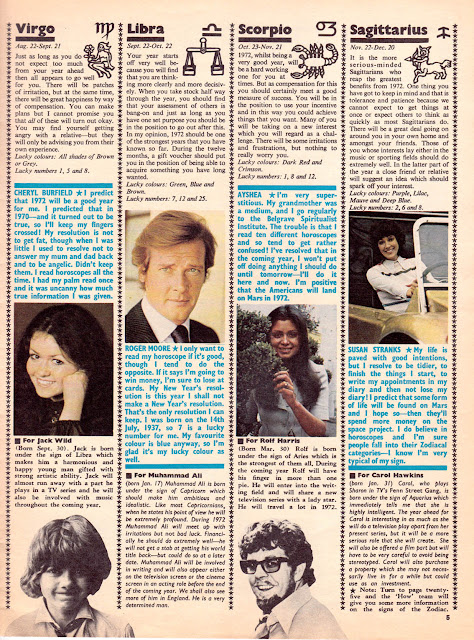 The Please Sir! strip now featured the less distinctive class of 'Four C', as the original cast of 'Five C' had left to spin off into their own TV series. Artwork by Graham Allen, who until a few years earlier had been drawing The Nervs for Smash! 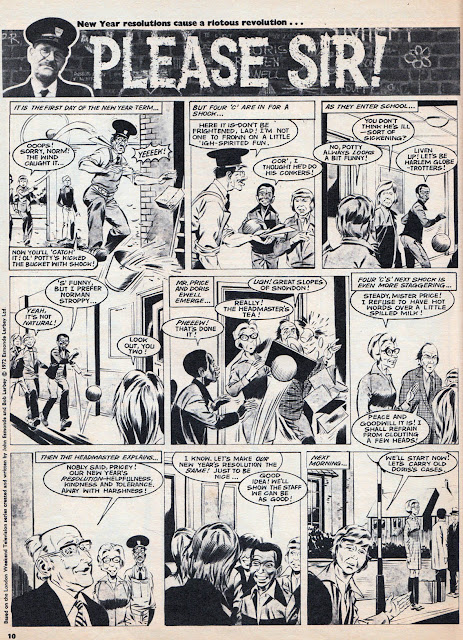 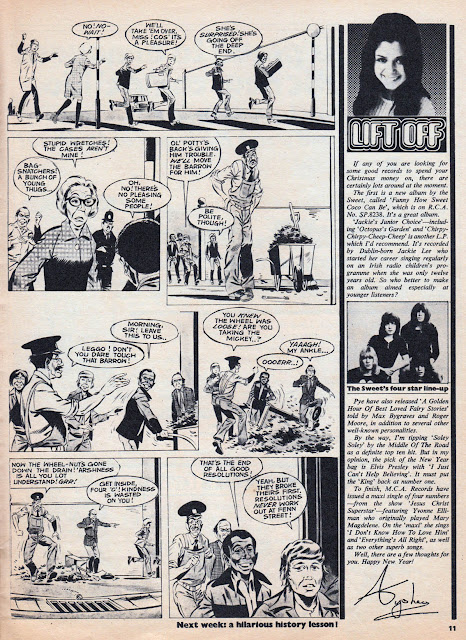 Follyfoot had no connection to a New Year theme but I couldn't resist showing artwork by Mike Noble... 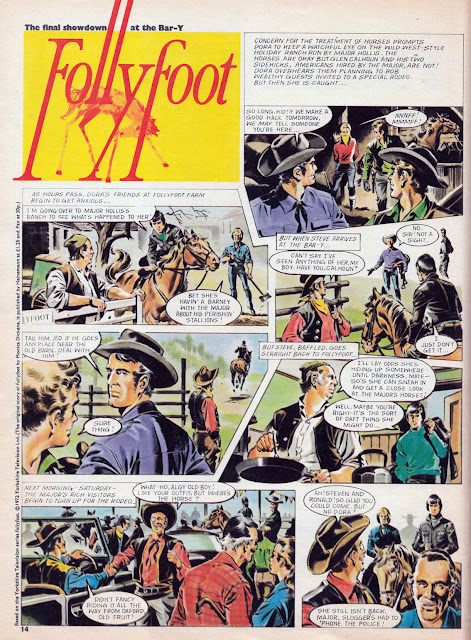 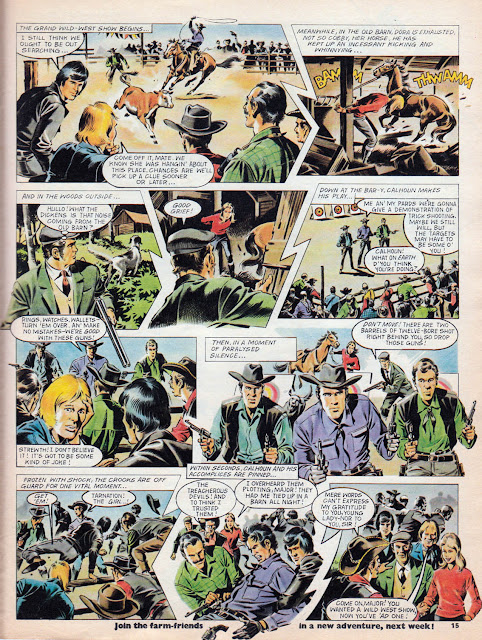 The aforementioned class of 'Five C' had left school to star in their own TV show The Fenn Street Gang, so Look-In featured a strip based on that too. Artwork by Tom Kerr... 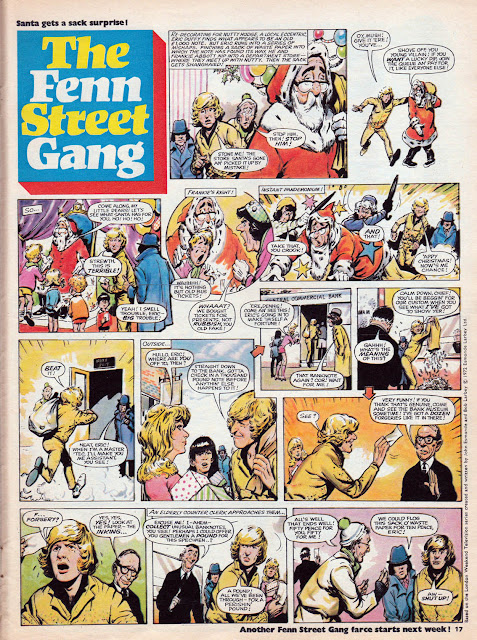 Even On the Buses had its own strip. Artwork by Harry North... 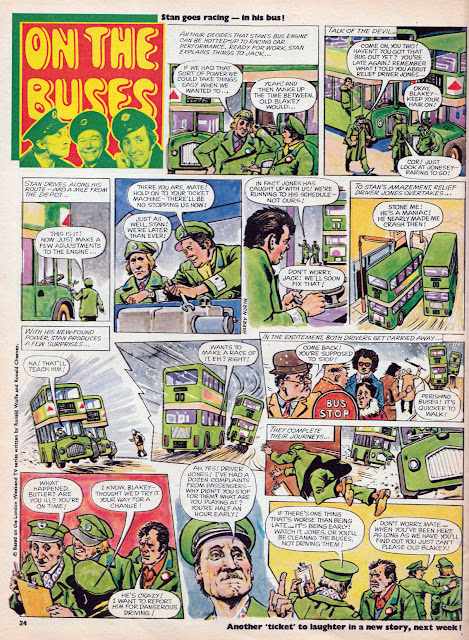 Subtitled 'The Junior TV Times', Look-In always featured selected highlights of ITV schedules for the week, focusing on the times children would be watching TV. Most of these regional TV stations have merged into others now... 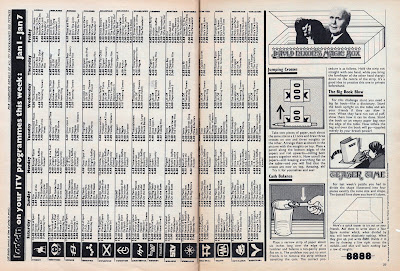 Here's the schedules the right way up so you don't have to tip your computer on its side. ;-) 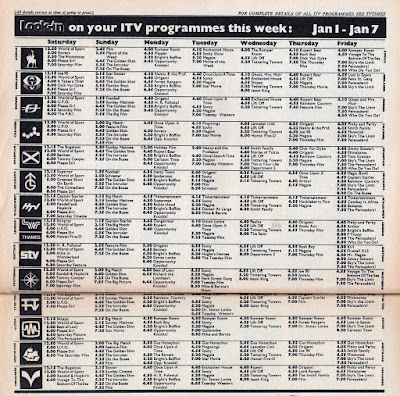 The back page of that issue featured a teaser for an Apollo badge offer that was coming in the following issue. Did any of you have these badges? 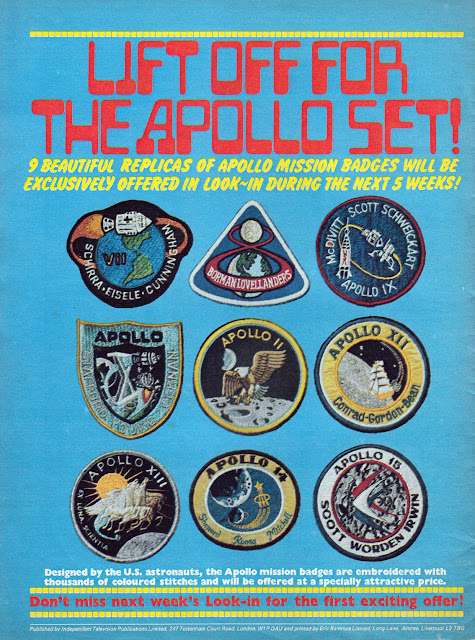 All that remains to be said is to wish you all a Happy New Year again and thank you for following this blog. Whatever you're doing this evening, have an enjoyable time!

It was obviously the 80s before I read any Look-Ins, and even then they belonged to either one of my sisters or my brother. I'd read the Knight Rider strip which I think was also in the annuals every year (the Knight Rider annuals I mean). Were all strips in Look-In British or were any imported? I'm just curious because of the American series such as this one and The A-Team which had strips and I always assumed they were made here specifically for the comic, but just curious if you knew otherwise?

I didn't have any of those patches Lew, but goodness I wanted them! Thanks for all your great work on Blimey. A happy New year to you and yours.

As far as I know, Phil, I think The Smurfs was the only imported strip (from a European comic). The strips for the A-Team, Battlestar Galactica etc were all originated in the UK along with the rest.

Thanks Colin. All the best.

The Universal shows BATTLESTAR and A-TEAM were both distinguished by also appearing simultaneously in MARVEL UK titles... Battlestar in STAR HEROES (after an abortive attempt to run it in STAR WARS WEEKLY) and THE A-TEAM in two specials. The dodge allowing the US reprints seemed to be that it was OK as long as they didn't appear in a weekly.

THE A-TEAM, surprisingly, started out as a strip in the dying days of TV COMIC (which even collected the weekly strips into a one-shot special) before moving to a more high-profile home in LOOK-IN.